The phenomenon of quantum erasure has long intrigued physicists, but has surprisingly found limited practical application. Here, we propose a protocol for quantum key distribution (QKD) based on quantum erasure, promising inherent security against detector attacks. We particularly demonstrate its security against a powerful detector-blinding attack.

Ideas at the root of quantum erasure were already at play in the famous Bohr-Einstein dialogue in the 1920's. In one such debate, Einstein envisaged a scenario where one could seemingly observe interference fringes in a double-slit experiment, as well as learn which-path information for individual photons [1]. Bohr countered, arguing that Heisenberg's uncertainty principle would prevent one from doing exactly that. But as it later turned out, the deeper explanation was in fact not uncertainty but rather entanglement—a concept Einstein himself helped put on the map in the EPR paper [2].

In 1982 Scully and Druhl [3] proposed a variant of the double-slit experiment that sent shock-waves through the physics community. The idea was that which-path information can be inferred without disturbing the trajectory of individual particles, circumventing the uncertainty argument. A simpler, subsequent proposal used excited atoms [4]. Scully and colleagues showed that interference would still be lost due to entanglement providing a which-path “tag.” In the latter proposal, the presence of an emitted photon in one of two microwave cavities placed directly behind the two slits (with the cavities stretching long enough for the atoms to drop from their excited state) would indicate which slit an atom went through. However, erasing this which-path information, by removing a wall between the two cavities, would restore the interference fringes: quantum erasure.

While the original quantum erasure proposals have not been implemented, other more practical ones have. For instance, Walborn et al. [5] directed photons, each from a polarization-entangled pair, toward a double-slit. Each slit had a polarization rotator that imprinted a which-path tag. Measuring the polarization of the other photon of the entangled pair in the right way erases which-path information. Here, interference fringes can even be recovered long after the photons passing through the double-slit have been detected.

Despite its fundamental significance, quantum erasure has for one reason or another struggled for practical application. One notable exception is Zhao et al. recently employing a frequency eraser to entangle, for the first time, different-color photons [6].

Quantum key distribution (QKD) on the other hand enables two remote parties to share a random string of zeros and ones. Given such a string, provably secure communication can be established [7]. Much of quantum cryptography thus reduces to QKD. In 1984, Bennett and Brassard proposed the first QKD protocol, the BB84 [8], which has since been shown to be unconditionally secure against an eavesdropper with unlimited resources [9]. However, imperfect devices, especially imperfect detectors, allow powerful so called side-channel attacks that can compromise the security of QKD. Lydersen et al. [10], for instance, showed how the secret key in two commercially available QKD systems can be fully obtained using their detector-blinding attack, exploiting a common detector imperfection. The protocol we propose here promises security against such attacks. 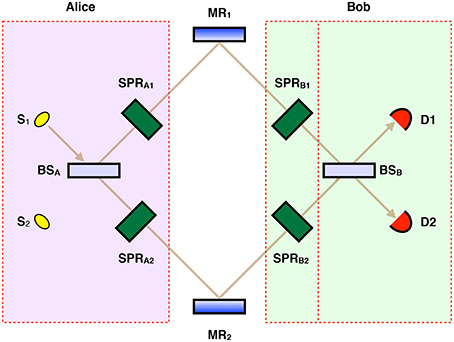 More precisely, Alice starts by sending in a photon, using single-photon source S1, in the state |0〉 |+45〉, where |0〉 corresponds to the photon being in the upper path, and |+45〉 corresponds to 45° polarization. After passing through Alice's 50-50 beamsplitter, the state becomes . If Alice chooses the bit value “0,” not applying her rotations, the state remains unchanged. If Alice chooses the bit value “1,” applying her rotations, the state becomes . See Figure 1. Crucially, the two states and are nonorthogonal and therefore cannot be reliably distinguished by Eve [11].

For the case of Alice choosing the bit value “1,” sending into the channel, there is which-path information. If Bob applies his rotations, choosing the bit value “0,” then which-path information is erased, resulting in the state . D2 clicks with certainty because of destructive interference at D1. But if Bob does nothing, choosing the bit value “1,” we get no interference: D1 and D2 are equally likely to click. Importantly, whenever D1 clicks, Alice and Bob have agreed in their bit choices. Alice publicly instructs Bob to keep the corresponding bits, which form our sifted key. Table 1 shows Alice and Bob's random bit choices and corresponding detector action.

Table 1. Detector action for different bit choices by Alice and Bob for the case of Alice sending in her photon from the top as shown in Figure 1.

This simplified two-state version is vulnerable to a simple Eve attack. She can make the exact measurement as Bob using two polarization rotators, a 50–50 beamsplitter, and two detectors. For Eve not applying her rotations, whenever her equivalent of Bob's D1 clicks, she knows Alice has sent her entangled state; Eve sends the entangled state. If Eve's other detector clicks, she sends nothing. The case of Eve applying her rotations is analogous. This way Eve can obtain the full key.

3. Alice announces whether she initially sent her photon from the the top using S1 or from the bottom using S2.

4. Bob announces which of his two detectors clicked for each photon.

6. Alice randomly chooses a sample from the sifted key. Alice and Bob publicly announce corresponding bits. If error rate exceeds some threshold they then abort protocol and start over.

During peer-review of the present paper a one-qubit protocol [12] was brought to our attention that shares an important feature with our two-qubit protocol; the secure key is extracted from measurement choices rather than measurement outcomes. Whereas for both protocols three out of four photons are on average thrown away, in our two-qubit protocol two out of the three photons that are to be thrown away can be used to check for an attack by Eve as shown in the next section.

While for Bennett and Brassard's BB84 QKD protocol [8], for comparison, only one out of two photons is thrown away in order to get the sifted key, in our protocol three out of four photons are thrown away. For this price, however, Eve's QBER in our erasure-based protocol is higher than that for BB84, and Eve's information gain is lower. For a typical intercept-resend strategy by Eve on BB84, Eve's QBER is 25% for an information gain I(α, ϵ) of 1/2, compared to a QBER of 33.3% for an information gain I(α, ϵ) of 0.311 in our protocol.

We have mentioned that Alice and Bob can make use of two out of the three photons that are to be thrown away on average, to check for an attack by Eve. When Alice and Bob make opposite bit choices, which means interference should take place, Bob measures polarization in the +45, −45 basis. He should always measure +45. (Bob can make this measurement by replacing each of his detectors by a 45° polarization rotator, which leads to a polarizing beam-splitter, which in turn leads to two detectors.) For Eve's intercept-resend attack above, Eve sends the wrong state half the time on average. This means Bob would measure −45 polarization with 25% probability, alerting him to Eve's attack.

Let us now look at Eve's detector-blinding attack inspired by Lydersen et al. [10]. Eve performs the same measurement as in the intercept-resend attack discussed above. Her information gain I(α, ϵ) therefore remains the same, 0.31. By means of high intensity light, Eve blinds Bob's detectors, causing them to only click for pulses of light with intensity above a given threshold. With probability 1/2 Eve correctly guesses Alice's state. Say Eve guesses that Alice sent an unentangled state, that is bit value “0.” She sends a strong enough pulse made up entirely of only one of Alice's two entangled states chosen such that if Bob's bit is also “0,” which corresponds to Bob applying his rotations, the whole pulse will end up at D1(D2) for the case of Alice sending her photon from top(bottom). If on the other hand Bob chooses bit value “1,” which corresponds to him not applying his rotations, roughly half of Eve's signal would go to one detector while the other half would go to the other detector. The intensity of Eve's pulse is chosen such that half the intensity is below the threshold for triggering either detector. No detector clicks. But Eve sends the wrong state to Bob roughly half the time on average. In this case, if Alice and Bob choose the same bit no detector clicks for the same reason. If, however, Alice and Bob choose different bits, which is half the time on average, the probability of Eve incorrectly triggering D1(D2) for the case of Alice sending in her photon from the top(bottom) is 1/2 × 1/2 × 1/2 = 1/8. The probability of Eve correctly triggering D1(D1) on the other hand is 1/2 × 1/2 = 1/4. The QBER is therefore 1/8÷(1/4+1/8) = 1/3. As before, for their sample of the sifted key, if estimated QBER < 33.3%, and estimated I(α, β) > 0.311, Alice and Bob proceed with the classical algorithms of error correction and privacy amplification to generate their secure key, otherwise they stop the protocol. By comparison, against the BB84, the detector-blinding attack enables Eve to obtain the full secret key without introducing any errors.

What about attacks whose aim is to learn which of Bob's detectors clicked? Because for each photon Bob publicly announces which detector clicked, if any, such attacks by Eve are not relevant. In fact, no bit-value information is encoded in the photon incident on Bob's beam-splitter. Bob's beam-splitter and two detectors, it seems, might as well be handed to Eve—as long as the module containing his two polarization rotators is kept secure. A general proof of the security of our protocol is planned for a separate paper.

In summary, we have proposed an erasure-based protocol for quantum key distribution that promises inherent security against side-channel detector attacks, analyzing its security against Eve's intercept-resend attack as well as her more powerful detector-blinding attack.

The author thanks M. Al-Amri, Sam L. Braunstein, and Zeng-Hong Li for valuable discussions in 2013, and more recently Roger Colbeck and Tim Spiller. Qubet Research is a start-up in quantum communication.

Copyright © 2016 Salih. This is an open-access article distributed under the terms of the Creative Commons Attribution License (CC BY). The use, distribution or reproduction in other forums is permitted, provided the original author(s) or licensor are credited and that the original publication in this journal is cited, in accordance with accepted academic practice. No use, distribution or reproduction is permitted which does not comply with these terms.