The nozzles have many advantages such as simple structure, easy processing, low investment cost, simple operation, and easy maintenance. Meanwhile, nozzles also have high reliability and adaptability, which can work in extreme environments [1, 2]. Therefore, they are widely used in fuel injection of various internal combustion engines. The research on the nozzle mainly focuses on the diameter and shape of the nozzle at present. These properties are very important for the mixture of the fuel ejected from the nozzle with oxygen in the combustion chamber, which related to the combustion process and combustion efficiency of the combustion engines [3, 4]. The distribution of oxygen concentration in the mixing area directly depends on the distribution of equivalent ratio of combustion area; moreover, the position of lean combustion area and rich combustion area inside the combustion chamber will be affected by the distribution of oxygen concentration, which is the key to reduce the emission of NOx, COx, and other harmful gases [4, 5]. It can be seen that measuring the oxygen distribution of the nozzle flow field is very important to assess whether the design scheme of nozzle achieves the expected purpose. Additionally, since the chemical character of oxygen is very active, the reaction is susceptible to nanomaterials, such as nanosheets and nanotubes; in turn, the fluorescence spectrum would be shifted with the increase of oxygen concentration [6–8].

As a kind of laser spectrum measurement technology, planar laser-induced fluorescence (PLIF) technology is applied to the diagnosis of high-speed variable flow field [9, 10]. In the development of internal combustion engine, the equivalent ratio distribution, temperature distribution, flame combustion area, and other flow field information in the engine combustion chamber have great significance for engine design and development [11–14]. PLIF technology can accurately measure the component concentration distribution, temperature variation, combustion area, and other flow field information inside the engine, and show the variation trend of these parameters in space and time [15, 16]. Based on these data information, the combustion process inside the engine can be further obtained, and it gives the basis for the engine structure modification and optimization design.

In our research, 3-pentanone is replaced with acetone for the first time by combining with toluene to measure oxygen concentration. Compared with 3-pentanone, acetone has the advantage of higher saturated vapor pressure at room temperature, which is more convenient to prepare tracer experimental gas with various required concentrations and more suitable for gas flow field diagnosis. Moreover, acetone has a weaker quenching effect on toluene fluorescence signal, which greatly improves the signal-to-noise ratio of toluene fluorescence image. Additionally, according to the research results of Shelar et al. [23], the fluorescence signal of 3-pentanone is significantly affected by oxygen quenching effect, while the fluorescence signal of acetone is weakly affected by oxygen. Therefore, the ratio of fluorescence intensity of acetone to toluene is more sensitive than that of 3-pentanone to toluene due to the variation of oxygen concentration.

The quenching effect of oxygen on fluorescence signal of toluene and acetone and the mutual quenching effect between them is studied for the first time. Toluene and acetone are diluted into high-purity nitrogen to form the experimental gas, which is injected directly into the air environment to form the nozzle flow field and measure the oxygen concentration distribution in this process. The fluorescence signals of acetone and toluene are captured by ICCD and IsCmos with specific filter.

E is the pulse energy density (J/cm2). hv is the single-photon energy in the case of the excitation frequency of v, and h is the Planck constant. η(λ) is the fluorescence photon collection efficiency of the entire fluorescence collection system for wavelength λ, which is determined by the combination of the lens, CCD, and other related equipment and experimental environment. Ω is the solid angle of the detector for the volume of the measured area. dVc is the volume element.ntol is the molecule density of tracer. σ(λex, T) is the absorption cross section of tracer in the case of the incident light wavelength of λex and the ambient temperature is T. ϕ(λ, λex, T, Pi, P) represents the fluorescence quantum efficiency of the tracer molecule, which is determined by the partial pressure Pi, total pressure P, temperature T, incident laser wavelength λex, and specific fluorescence wavelength λ.

Because the quenching effect is mainly from oxygen and tracer, the quenching effect of other components can be neglected. The fluorescence signals of acetone and toluene in the same position (x, y) can be represented by Sa(x, y) and St(x, y). If the experimental gas composed of toluene, acetone, and diluent gas is fully mixed and the concentration ratio of the two tracers is known and the excitation wavelength of laser is a single wavelength (266 nm), the same term can be eliminated and Equation (2) can be obtained. Pi represented the partial pressure of the other tracer or oxygen. a is constant.

The fluorescence intensity ratios of different tracers directly depend on the oxygen concentration in different environments, which results from the denoted degree of contribution from oxygen quenching in various tracers. By comparing the ratio change of the fluorescence intensity of toluene and acetone, the distribution of the oxygen concentration could be determined.

The schematic diagram of the experimental device is shown in Figure 1; the quenching effect of oxygen on the acetone and toluene and the mutual quenching effect between acetone and toluene were measured in a static cell with quartz window. The detector was Andor ICCD or Spectrometer equipped with ICCD, and the excitation source was 266 nm pulsed laser from Nd:YAG. Two laser energy probes are used to measure the energy of each laser pulse. The timing of the whole system was controlled by digital delay. The Stern–Volmer coefficient measurement kSV of different quenching agents was measured by controlling the partial pressures of different components in the static cell. We obtained the fluorescence signal pictures under different concentrations of tracer and quenching agent. Nitrogen was used as the diluent gas throughout the experiment, and the total pressure was maintained at 100 kPa. 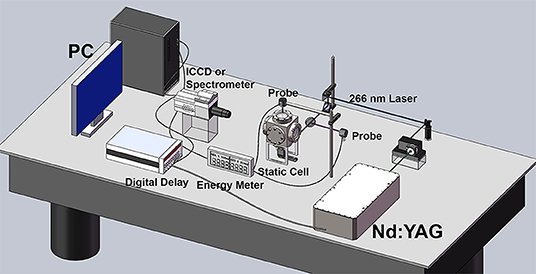 Measurement of Oxygen Concentration Distribution in the Nozzle Flow Field

The experimental diagram is shown in Figure 2. The timing control of the whole PLIF system was controlled by DG645 (Stanford Research System). The experimental gas was fed into the nozzle and then sprayed into the air environment. The shaping laser beam was incident to the observation area, so as to excite tracer molecules to produce fluorescence. ICCD and IsCmos were positioned on both sides of the nozzle, and the two detectors focus on the observation area; meanwhile, the corresponding lenses and filters were installed, respectively to capture fluorescent signals of acetone and toluene, respectively. The nozzle diameter is 4 mm. The resulting fluorescent images were stored directly in the computer.

The Fluorescence Spectra of Traces and Corresponding Filters 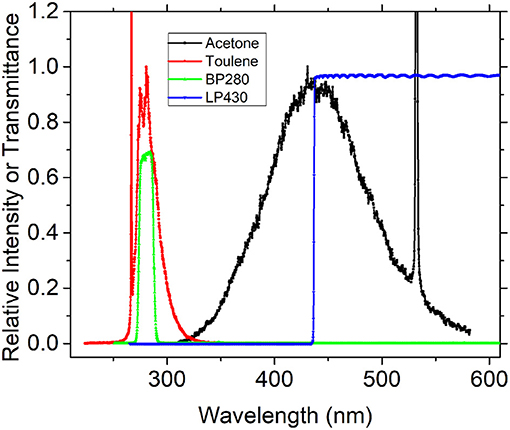 Compared with other PLIF flow field diagnostic tracer, the greatest advantage of the acetone and toluene for PLIF imaging is that they can be excited at a single wavelength and the peak areas of their fluorescence spectrum are distinguishable, making it easy to use specific filters for simultaneous signal acquisition.

The quenching effect of oxygen and acetone on toluene was first studied, as shown in Figure 5. Figure 5A shows that the fluorescence intensity of toluene gradually decreases with the increase of partial pressure of oxygen in the environment. Figure 5B shows that the toluene LIF is quenched by oxygen with a clear Stern–Volmer behavior allowing for linear regression. The slopes give the Stern–Volmer coefficients, = 2.21 kPa−1. The quenching coefficient of oxygen to toluene measured by Koban et al. [17] is = 2.39 kPa−1, which is consistent with the experimental results. 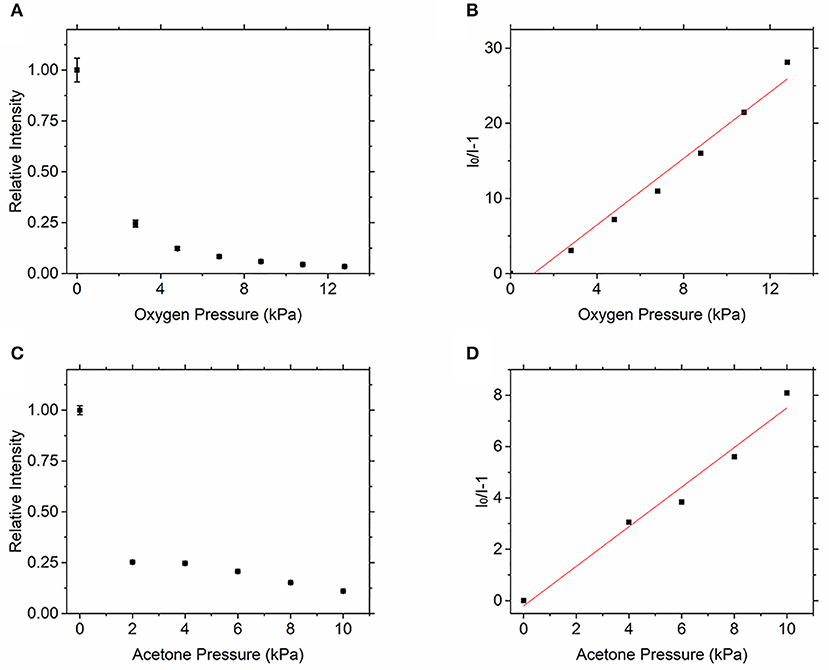 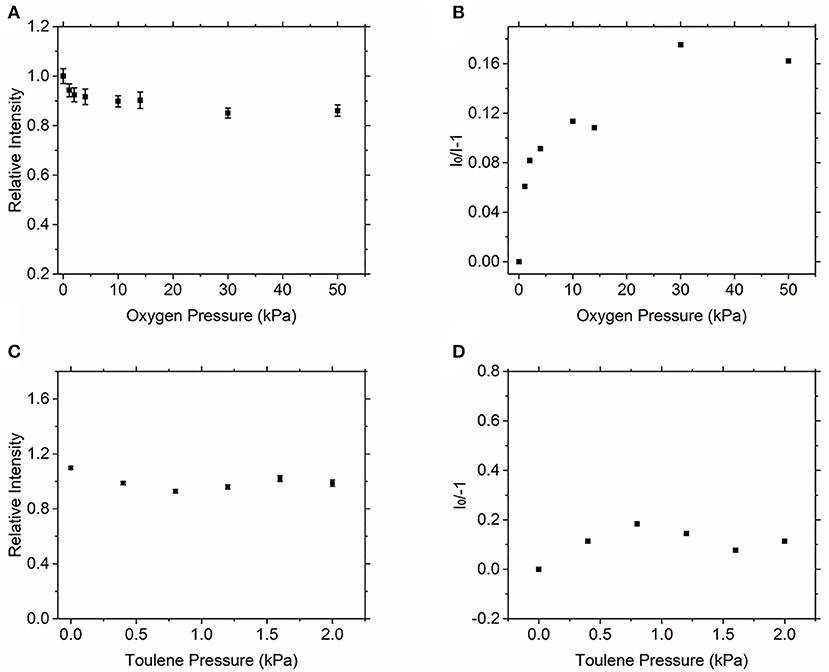 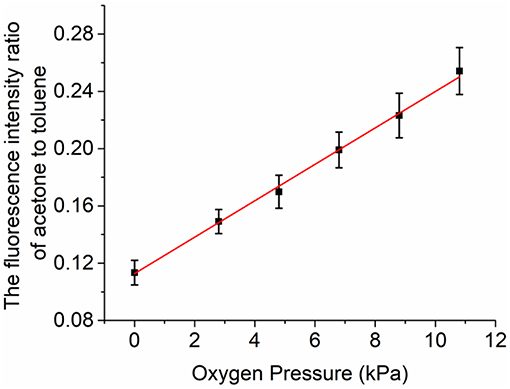 Figure 7. The relationship between fluorescence intensity of acetone and toluene and partial pressure of oxygen.

In the calibration process of this experiment, due to the error of energy meter probe, pressure gauge, thermocouple, and other measuring equipment, the total error actually generated is 7.5%. The error of the intensifier camera and the image processing method is estimated to be 5.1%. At the same time, the quenching effect of acetone on the fluorescence signal of toluene was negligible in this experiment, and the fluorescence intensity of toluene would have an additional measurement error of 7.1%. According to the error transfer principle, the maximum error is estimated to be 12.6%. When the oxygen partial pressure is 6 kPa, the accuracy of actual measurement is 9.5%. Compared with the previous tracer combination of toluene/3-pentanone, the accuracy is 10% under the same condition of oxygen partial [17]. The new dual tracer combination improves the measurement accuracy to some extent.

Measurement of Oxygen Concentration Distribution in the Nozzle Flow Field

Figure 8. The two-dimensional distribution of acetone (A), toluene (B), and the mixing area (C).

Figure 9A shows the distribution of oxygen concentration in the nozzle flow field in a moment (gate width is 100 ns). It can be seen that the center area of the nozzle is still an oxygen-free area. The formation and fracture of vortex structure exist in the mixing zone of gas and oxygen, which indicates that this measurement method can be applied in a turbulent flow field. The variation trend of oxygen concentration distribution in the nozzle flow field can be analyzed by capturing multiple PLIF images in time sequence, which has the important reference value for the development of the nozzle burner flame. Figure 9B shows the distribution of mixed areas through a three-dimensional diagram. The results showed that the mixing area of oxygen and experimental gas from the nozzle was concentrated in the boundary layer, and the widest width of the mixing area was about 2.1 mm. Oxygen concentration also increases radially in general.

Figure 9. Oxygen concentration distribution of the nozzle flow field (A) and 3D diagram (B).

Figure 10A shows the oxygen concentration distribution in mixing area under different airflow velocity. Eighty consecutive images were selected in each working condition for average processing. The airflow velocity at the nozzle is 2.64, 3.96, 5.28, and 6.60 m/s, in the four pictures from left to right. 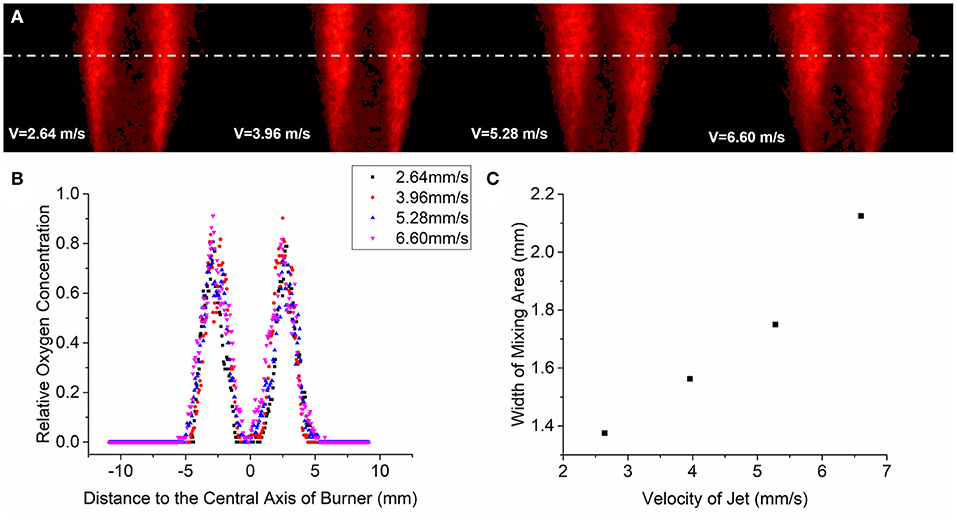 Figure 10. Eighty consecutive images were selected in each working condition for average processing (A). The cumulative average of the oxygen concentration in the horizontal direction is processed and normalized under different operation conditions (B). The relationship between the width of the mixing region and the velocity of the jet stream (C).

XY was the leader of the work. GC and JP were responsible for experiment setting and paper writing. YY, LG, and ZC were mainly engaged in picture editing and related data processing. BY, YL, and TQ contributed to the stable operation of nozzle. All authors have made positive contributions to the work.

Copyright © 2019 Yu, Chang, Peng, Dong, Yu, Gao, Cao, Yan, Luo and Qu. This is an open-access article distributed under the terms of the Creative Commons Attribution License (CC BY). The use, distribution or reproduction in other forums is permitted, provided the original author(s) and the copyright owner(s) are credited and that the original publication in this journal is cited, in accordance with accepted academic practice. No use, distribution or reproduction is permitted which does not comply with these terms.

State-of-the-Art Laser Spectroscopy and its Applications