In this work, we examine time-fractional fourth-order parabolic partial differential equations with the aid of the optimal homotopy asymptotic method (OHAM). The 2nd order approximate results obtained by using the suggested scheme are compared with the exact solution. It has been noted that the results achieved via OHAM have a large convergence rate for the problems. The solutions are graphically analyzed, and the relative errors are presented in tabular form.

The physical behaviors of fractional order differential and integral equations have been studied in fractional calculus (FC). Fractional calculus deals with more general behavior than classical calculus. However, in the present era FC has got more attention for its vast applications in many fields such as science and engineering. Spanier and Oldham [1], Podlubny [2], and Miller and Rose [3], have studied this subject in detail and developed the theoretical explanation of the subject. During the last few decades, a large number of researchers have noted that the role of fractional differential or integral operators are unavoidable in representing the characteristics of physical phenomena like traffic flow, viscoelasticity, fluid flow, signal processing, etc., [4–10]. Many processes and equipment have been efficiently explained by FC. Furthermore, comparative studies have been done for fractional and total differential models. In conclusion, the fractional models are more effective than classical models. Fourth ordered linear PDE

is very important in engineering and modern science. Bridge slabs, floor systems etc. are examples of fourth order PDEs. Where v is the beam transversal displacement, μ the is ratio of flexural stiffness to mass per unit length, t is the time, s is the space variable and h is the dynamic deriving force acting on unit mass.

In this study, the problem of undamped transverse vibrations of a flexible straight beam is considered. The support of the beam does not contribute to the strain energy of the system. The mathematical model of the problem is expressed in the form of the following time-fractional fourth-order parabolic partial differential equation as

where ∂t and ∂s represents the partial derivatives with respect to t and s, respectively. The initial and boundary conditions are

where denotes the fractional order derivative operator, v(s, t) is the displacement of the beam in s direction, μ is the ratio of flexural stiffness to mass per unit length, t the is time, s is the space variable and f(s, t) is the dynamic deriving force acting on per unit mass, and g0(s), g1(s), f0(t), f1(t), p0(t) and p1(t) are continuous functions.

The concept of homotopy has been merged with perturbation in order to solve non-linear problems. Liao [11] conducted the basic work by utilizing the homotopy analysis method (HAM). He [12] presented the homotopy perturbation method and its applications. Marinca et al. [13–15] developed a novel computational scheme known as OHAM. The OHAM established a convergence criteria similar to HAM, but OHAM is more flexible. In various research papers Iqbal et al. [16–18] and Sarwar et al. [19, 20] have demonstrated the usefulness extension and trust of this technique and have achieved trustworthy solutions. In this paper, the Idea of OHAM has been explained. It gives logical, trustworthy solutions to linear and non-linear mathematical model fractional orders.

Definition 2.1. Riemann-Liouville form of integral operator of a function g ∈ cλ, of fractional order β > 0,λ ≥ − 1 is expressed as

Definition 2.2. Riemann-Liouville form of integral operator of a functiong(t) of fractional order β > 0 is given as

Definition 2.3. The Caputo fractional derivative of order β > 0 is expressed as

Based on the OHAM scheme [18, 19], we will extend this approach for time-fractional parabolic partial differential equations (TFPPDE) in the subsequent steps.

Where the auxiliary convergence control parameters are ci, i = 0, 1, 2, 3, …, m and Ji(s), i = 0, 1, 2, 3, …, m can be a function on the variables. The Jm(s, ci) may be selected in the form of polynomial, exponential and so on. It is very important to note that the crucial step is to select an appropriate function as the convergence rate depends on the initial guess of the solutions.

It has been clarified that the rate of convergence of the (11) depends upon auxiliary constants ci. If the Equation (11), at p = 1 is convergent, then one has:

Step IV. Compare the coefficients of identical powers p after substituting Equations (11) in (9), we can get 0th, 1st, 2nd and higher order problems if needed.

Step V. Substitute Equations (12) in (8), the outcome will be residual.

Residual of Problem Is R

Convergence auxiliary control (ci) constants can be acquired as follows.

Step VI. Using the convergence auxiliary control constants in Equation (12), we can develop an approximate solution.

Step VII. Accuracy of the technique is presented as

In the current section, we take the two examples and solve them with the aid of OHAM and demonstrate the accuracy, validity, and suitability of the suggested computational scheme.

Let us take the fourth order TFPPDE of the form

Exact solution of problem is

Compare the coefficients of equal powers of embedding parameter p, after substituting ϕ(s, p) in to optimal homotopy equation to get zero-order, 1st-order, and 2nd-order and higher-order series problems.

After implementing the step-5 of sec-3 on Equations (22–24), we get following zero-order, 1st-order and 2nd-order results:

After using Equations (25–27), we get the second order solution as follows

Compare the coefficients of like powers of embedding parameter p, after substituting ϕ(s, p) in to optimal homotopy equation to get zero-order, 1st-order, 2nd-order and higher-order (if needed) deformed problems as under:

After implementing the step-5 of sec-3 on Equations (31–33), we develop the following zero-order, 1st-order and 2nd-order results.

After using Equations (34–36), we get the second order solution as follows:

In the last section, a detailed algorithm for OHAM is presented for parabolic equations of arbitrary fractional order, and a description is designed for the examples in the above section which gives remarkably valid results for the TFPPDEs without domain discretization. OHAM does not require any higher order solutions to initiate the process.

In the Tables 1A, 2A for examples 1 and 2 represent the values of auxiliary constants c1 and c2 for distinct values of α, α = 1.5, 1.75, and 2. Tables 1B, 2B for examples 1 and 2 represent the approximate and exact solutions with absolute error for distinct values of α at fixed time t = 0.01, and also error norms of example 1 are and error norms of example 2 are , which demonstrates the validity and accuracy of the suggested scheme.

Table 1A. Shows the order of solution of problem-1 with α. 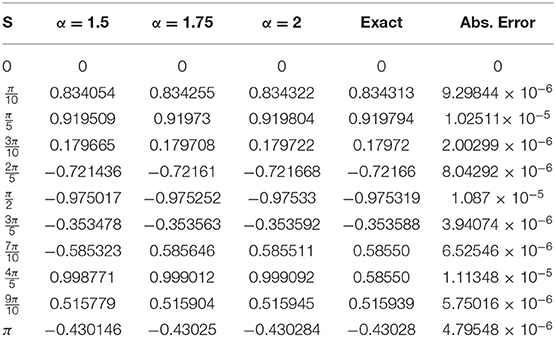 Table 1B. Shows the solutions and absolute error of problem-1 for various values of α.

Table 2A. Shows the order of solution of problem-2 with α. 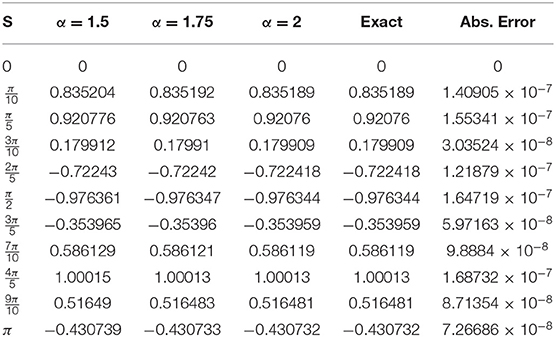 Table 2B. Shows the solution and absolute error of problem-2 for distinct values of α. 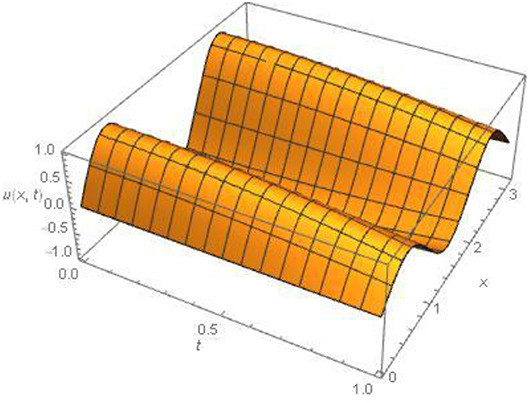 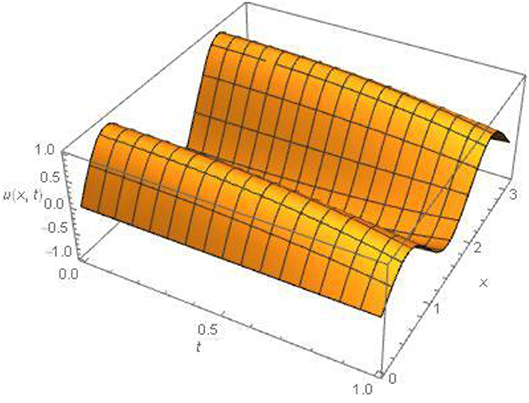 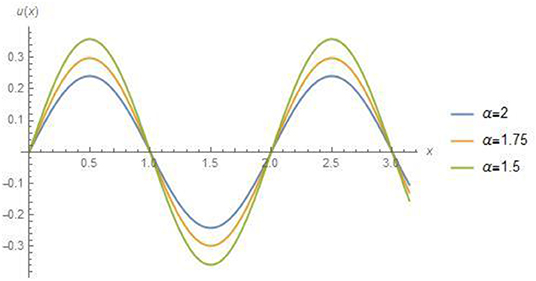 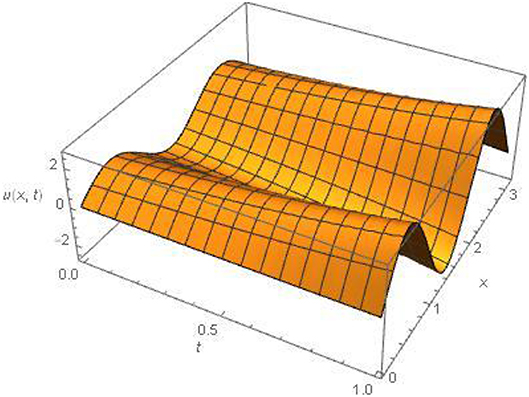 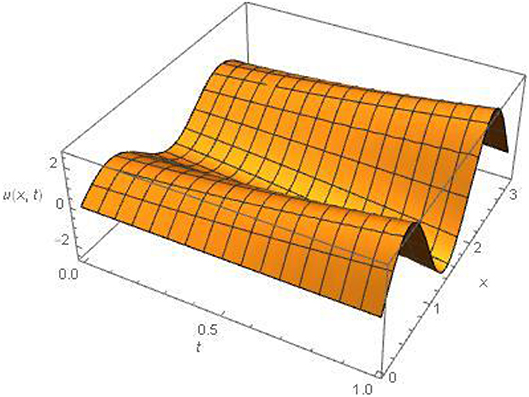 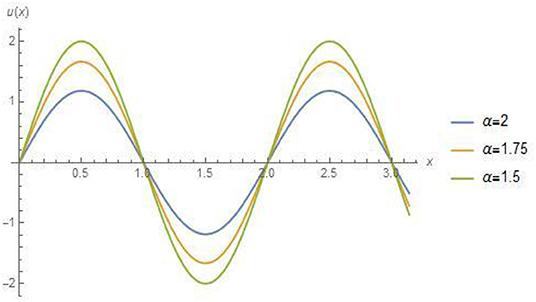 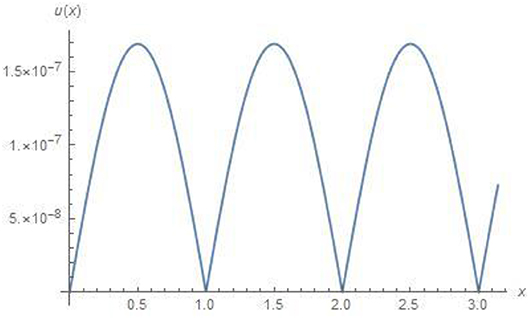 values of α, α = 1.5, 1.75 and 2 at fixed value of t = 0.01. All the above figures indicate the accuracy, suitability and effectiveness of the suggested algorithm. It is clear that as we proceed along the domain, we obtain consistent validity. In the above discussion (Tables 1B, 2B) show an excellent agreement between the approximate and exact solutions.

In this work, the TFPDE are examined by a semi-analytical scheme. The problems in hand are solved by OHAM. OHAM is incredibly effective for fractional order parabolic partial differential equations. The solutions obtained from OHAM are smooth enough to be compared with the exact solutions. The graphical reviews show the smoothness of the solutions. The error estimations with the exact solutions are of order 10−6. The tabular and graphical reviews of the solutions and errors are presented for different values of 1 < α ≤ 2 which are convergent. L2 error and L∞ error norms are calculated which show the error bounds. The error bound is of order 10−7. This is incredibly excellent.

This article focuses on the approximate solution of the parabolic equation which has many applications in engineering and physical sciences. The contribution of this article is 3-fold: first, we briefly defined the concept of fractional derivative, then developed the mathematical model. In the last step we implemented OHAM to find the solution of the model. The results are graphically represented and shown in tabular form to show the novelty and credibility of our method. In the future, we are interested in implementing OHAM on the system of fractional order partial differential equations in a more general way.

Copyright © 2020 Mustahsan, Younas, Iqbal, Rathore, Nisar and Singh. This is an open-access article distributed under the terms of the Creative Commons Attribution License (CC BY). The use, distribution or reproduction in other forums is permitted, provided the original author(s) and the copyright owner(s) are credited and that the original publication in this journal is cited, in accordance with accepted academic practice. No use, distribution or reproduction is permitted which does not comply with these terms.