Motivated by the discussions above, this paper aims to provide several novel criteria on cluster synchronization of complex networks with adaptive coupling strength via pinning control. We carry out a new dynamical network model possessing four characteristics, i.e., delayed dynamics, non-identical nodes, directed topology and time-varying coupling strength. To the best of our knowledge, there is no previous research discussing the problem of cluster synchronization of such a network model. However, the problem mentioned above should be an important issue of complex networks because of its wide applications in practical problems. Then we design proper pinning controllers and adaptive coupling strength, and sufficient conditions are derived to realize cluster synchronization by using Lyapunov stability theory and matrix theory. In order to illustrate the feasibility and validity of the obtained theoretical results, several numerical simulations are presented.

The rest of this paper is designed as follows. The network model is described and some necessary lemmas and assumptions are stated in section 2. Via pinning and adaptive controls, cluster synchronization in a delayed network is discussed and then some sufficient conditions are given in section 3. Numerical examples are obtained in section 4. Finally, in section 5, conclusions are presented.

Consider a network consisting of N nodes, which are divided into m communities C1, C2, …, Cm, where 2 ≤ m ≤ N. It is easy to see that there holds If the ith node belongs to the jth cluster, then we define ϕi = j. The function can be employed to describe the local dynamics of each node in the ith cluster.

Now, we consider a delayed dynamic network described by the following equations,

where is the state variable of node i; fϕi is differentiable and capable of performing abundant dynamical behaviors. If ϕi ≠ ϕj, i.e., the ith node and the jth node belong to different clusters, then fϕi ≠ fϕj. δi(t) > 0 is a time-varying coupling strength. τ > 0 is a constant. δi(t) is the time-varying coupling strength. Γ ∈ Rn×n is an inner-coupling matrix. For simplicity, we suppose that Γ is a positive definite diagonal matrix, that is, Γ = diag(ρ1, ρ2, …, ρn) with ρi > 0. The asymmetric matrix A = (aij)N×N describes the topology of the directed network, where aij ≥ 0, i ≠ j, is the weight of the edge from j to i. Here, the coupling matrix A is supposed to be diffusive, that is, aii are defined as

Assumption 1 ([23]). For the vector-valued function , there exist a constant L such that

Defining the error variables by ei(t) = xi(t) − sϕi(t), i = 1, 2, …, N, the oscillator network (2) is said to realize cluster synchronization, if the synchronization errors satisfy

The following error system can be concluded from the Equations (2) and (3),

T is a positive constant. Here, ui(t) and δi(t) are different from the corresponding functions of the previous papers, such as [3, 12, 14, 21]. It is easy to see that each node in the network has a different coupling strength. By intuition, the first term in the controller (5) is used to synchronize all nodes in the same cluster, while the second term in the controller (5) is to weaken the influences of the couplings among different clusters.

In this section, the problem of cluster synchronization in delayed networks will be investigated by designing proper pinning controllers and adaptive coupling strength. Based on Lyapunov functional method and matrix theory, the following theorem is established.

then, by the local control (5) and the corresponding adaptive laws (6), the solutions e1(t), e2(t), …, eN(t) of the system (4) satisfy That is, cluster synchronization in the network system (2) is realized.

According to Assumption 1, we have

Let Q = Γ = In, we obtain the following corollary.

In this section, we give a numerical example to verify the theorem given in the previous section.

Consider a directed network consisting of 10 nodes with two communities, the topological structure of which is shown in Figure 1. Choose the node dynamics of the five nodes in the first cluster as the time-delayed Chua's circuit, which is described by the following equations,

where and i = 1, 2, …, 5. Choose the node dynamics of the five nodes in the second cluster as the time-delayed 3-D neural network which is described by the following equations, 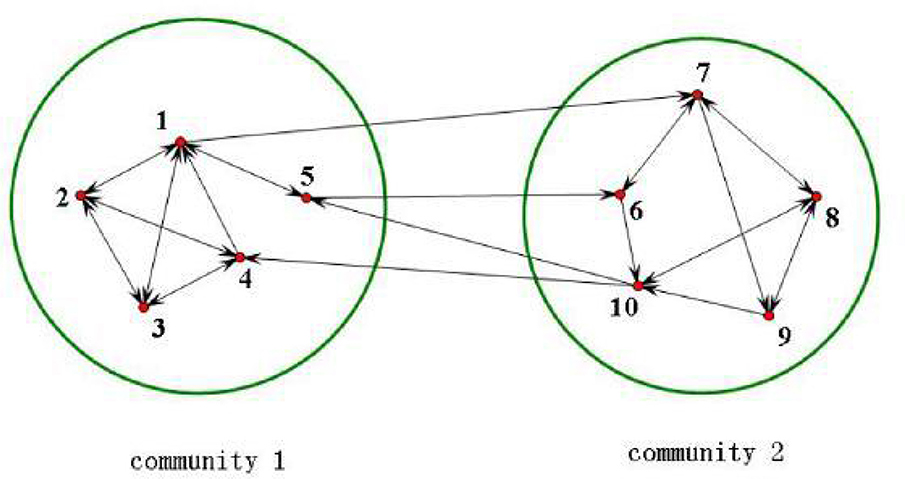 Figure 1. A directed network consisting of 10 nodes with two communities.

Matrices V1 and V2 are, respectively, defined by

Recalling that Ḡϕi denotes the set consisting of all nodes in the ϕith cluster which have direct connections to the nodes in other clusters. It is easy to see that Ḡ1 = {1, 5}, Ḡ2 = {10} and

By the aid of Matlab, we obtain Figure 2, which shows the time evolutions of the component xi1, i = 1, …, 10. In Figure 2, the red lines represent the first five nodes, and the blue lines represent the latter five nodes. Figures 3, 4 show the time evolutions of E(t) and E58(t), respectively. It is easy to see that the error E(t) tends to zero, but E58 doesn't tend to zero when t → +∞. That is to say, 2-cluster synchronization is achieved, and the effectiveness of the theoretic results is verified. 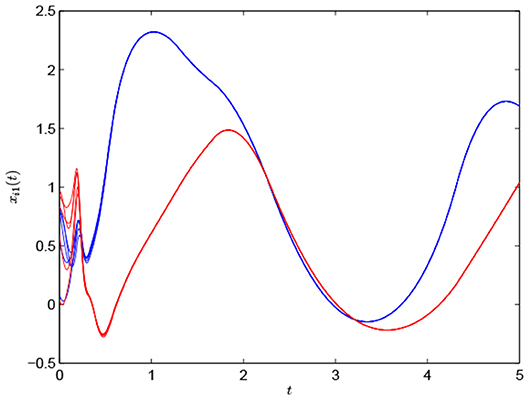 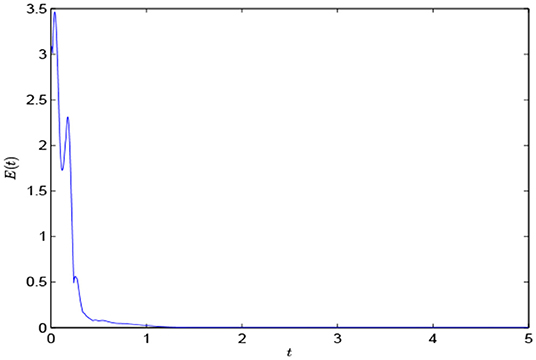 Figure 3. The time evolution of E(t). 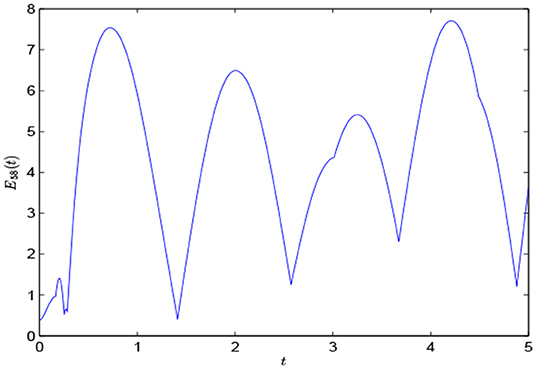 In this paper, the problem of cluster synchronization in a complex network via pinning control has been investigated, and several novel criteria have been derived by utilizing the matrix theory and the stability analysis technique. The object of this research is a dynamical network possessing four characteristics, delayed dynamics, non-identical nodes, directed topology and time-varying coupling strength. And from the control schemes of this research, we present a novel mixed method, which integrated the pinning control and adaptive feedback control, to design proper pinning controllers and adaptive coupling strengths to realize cluster synchronization in such a dynamical network. For convenience, we also carried out a succinct and utilitarian corollary by simplifying the obtained conditions. Finally, numerical simulations are provided to illustrate the effectiveness of the proposed control methods.

Copyright © 2020 Zhang, Ma, Li and Qiu. This is an open-access article distributed under the terms of the Creative Commons Attribution License (CC BY). The use, distribution or reproduction in other forums is permitted, provided the original author(s) and the copyright owner(s) are credited and that the original publication in this journal is cited, in accordance with accepted academic practice. No use, distribution or reproduction is permitted which does not comply with these terms.