Entropy and Enumeration of Subtrees in a Cactus Network

We first introduce some general notation and definitions that will be used throughout the paper. Undefined notation and terminology will follow Bondy and Murty [19].

We follow Zhang et al. [18] and Wu et al. [20] to define Koch networks. Denote by Gm,g the Koch network after g iterations, which has Ng vertices, Eg edges and Lg triangles. At g = 0, Gm, 0 is a triangle with three vertices labeled by X, Y, and Z, respectively. This triangle is called the initial triangle, and its three vertices are called hub vertices. For g ≥ 1, Gm,g is obtained from Gm,g−1 by attaching m triangles to each of the three vertices in each triangle in Gm,g−1. The Koch networks for m = 2 are shown in Figure 1.

To extend the notion of Koch networks, we introduce 3–cactus networks.

Step 1: When t = 0, G0 is isomorphic to K1, the graph with one vertex and no edges. The only vertex in G0 is called the initial vertex of Gt.

Observation 1. Let t ≥ 0 be an integer, and let Gt ∈ (t) be a network formed by Definition 1 using t iterations. Each of the following holds.

Figure 2. The 3–cactus networks and .

3. Algorithm for Counting the Number of Subtrees

In this section, we present a linear algorithm to count the number of subtrees in a 3–cactus network and its proof of the correctness.

As there will be t iterations using Step 2, the complexity of Algorithm A is O(t). Since running Algorithm A to a 3–cactus networks Gt ∈ (t) can be performed in a reverse order of building Gt as described in Definition 1, it is possible to arrange the iterations in Step 2 during the running of Algorithm A so that when Algorithm A terminates, only the initial vertex of Gt is left. 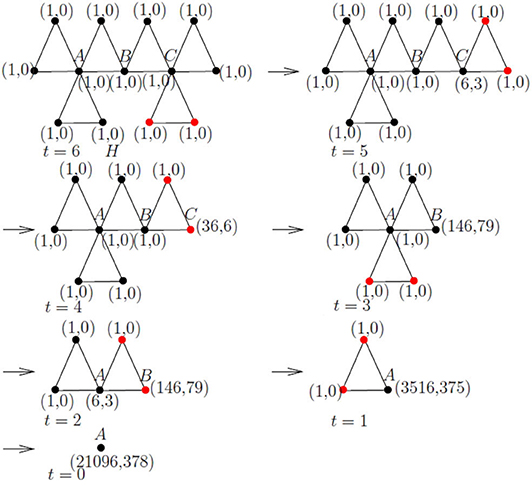 Figure 3. An example of calculating the number of subtrees by Algorithm A, where two red vertices are deleted at each step.

Theorem 1 proves the correctness of Algorithm A.

(i) The value of a, denoted by ηu0(Gt), is the number of subtrees containing vertex u0 in Gt.

(ii) The value of b, denoted by η(Gt − u0), is the number of subtrees that do notcontain vertex u0 in Gt. 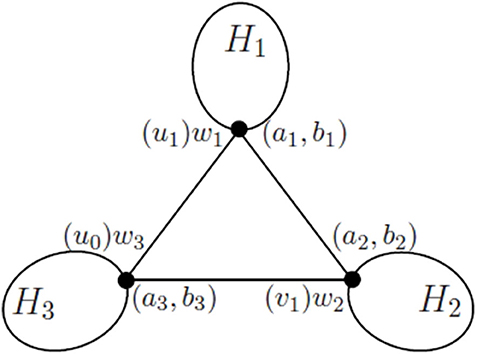 Let denote the collection of subtrees of Gt. Define

With a similar argument and using , we have

This shows that when Algorithm A terminates, it outputs the values as stated in Theorem 1 (i), (ii), and (iii), and justifies the correctness of Algorithm A. □

4. Upper and Lower Bounds of the Number of Subtrees in a 3–Cactus Network

The following lemma [8] will be used in our proof.

Theorem 2. For an integer t, is the unique 3–cactus network with the maximum number of subtrees in (t).

Proof: We prove the theorem by induction on t, and observe that the theorem holds when t ∈ {1, 2}. Let k ≥ 3 be an integer and assume that the result is true for t < k. We consider that case when t = k.

The next lemma presents some observations which follow from Algorithm A.

Theorem 3. For an integer t, is the unique 3–cactus network with the minimum number of subtrees in (t).

where the equalities hold if and only if . □

With Algorithm A, we can compute the numbers of subtrees of and , respectively. Let u0 be the center of and v0 be a vertex of degree 2 in a pendant triangle of . From Algorithm A, it follows that

By algebraic manipulations, we obtain that 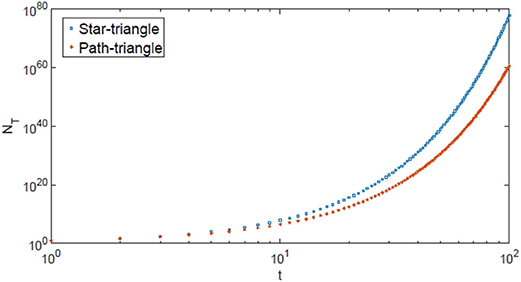 5. The Entropy of Subtrees of Koch Networks

The entropy of spanning trees has been well-studied, as seen in Lyons et al. [21] and Zhang et al. [22, 23], among others. The entropy of subtrees can be similarly defined.

Definition 2. Let G be a network with N(G) vertices. The entropy of subtrees of G is defined as follows:

Let T be a tree with n vertices. Székely and Wang [2] and Yan and Yeh[3] obtained the results of the number of subtrees in a tree as follows: , where Pn and K1,n−1 are the path and star with n vertices, respectively. So, we have

From Equations (5) and (6), we can calculate the entropies of subtrees of and , respectively, as follows:

Therefore, for a tree T with n vertices and a 3–cactus network Gt with t triangles, we have

Now we calculate the entropy of subtrees of Koch networks. The following definition and notation will be used in this section.

For Koch networks, another construction is given as follows. The network Gm, g is obtained from Gm,i (i = 0, 1, 2, …, g − 1) and the initial triangle by adding m copies of Gm,i to each of the three hub vertices of the initial triangle, as shown in Figure 7. 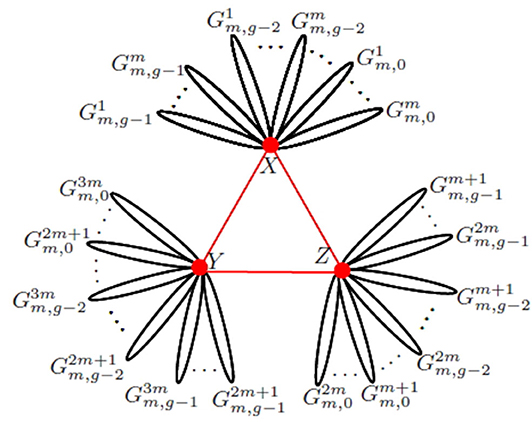 Figure 7. Another construction of Koch networks. The network after g iterations, Gm,g, consists of 3m copies of Gm,i labeled by . 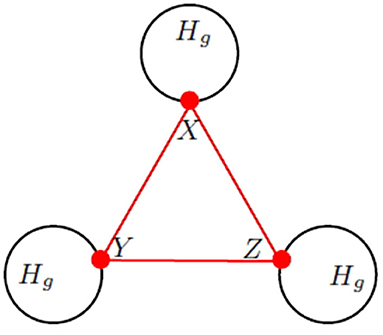 By Algorithm A to the initial triangle (X, Y, Z), we get that

From Equation (7), we obtain

According to the above theoretical analysis, we give a linear algorithm for counting the number of subtrees in a Koch network, as follows.

Algorithm B: Initial condition: Let Gm,g be a Koch network generated by g iterations and X, Y and Z be three hub vertices in Gm,g. Let η(Gm,g) denote the number of subtrees of Gm,g.

It is not difficult to see that the complexity of the above algorithm is O(g). In order to calculate the entropy of subtrees of Koch networks, we need the following lemma:

Lemma 4. Let Gm,g be a Koch network generated by g iterations. Then

Proof: From Equation (10), we have the following recurrence relations:

It is easy to obtain . Note that .

The proof is thus complete. □

From Lemma 4, we can calculate the entropy of subtrees of Koch networks, as

Next, we can compare the entropy of subtrees of Koch networks with those of and . Observe that and Thus, the following inequality holds.

LD, HZ, and H-JL contributed the conception and design of the study. LD organized the literature, wrote the simulation programs, and performed the design of figures. LD and HZ wrote the first draft of the manuscript. All authors contributed to the manuscript revision, read, and approved the submitted version.

The authors were very grateful to the referees and the editor for their valuable comments and suggestions, which significantly improved the presentation of this manuscript.

Copyright © 2020 Dong, Zhao and Lai. This is an open-access article distributed under the terms of the Creative Commons Attribution License (CC BY). The use, distribution or reproduction in other forums is permitted, provided the original author(s) and the copyright owner(s) are credited and that the original publication in this journal is cited, in accordance with accepted academic practice. No use, distribution or reproduction is permitted which does not comply with these terms.