Electro-fluidic display (EFD) is a new reflective display based on electrowetting phenomenon which is applied to the outdoor billboard. Organic dyes are the most important materials for the color gamut and reliability of the EFD devices, which are always synthesized based on mono-chromophore dye in previous work. In this paper, we report our research on azopyrazolone as the chromophore to construct a polychromic macromolecular dye system. The light stability and photo-electric properties of these new dyes are researched detailed. It is found that the light stability of multi-chromophore dyes and backflow properties are much better than corresponding mono-chromophore dye.

Recently, electro-fluidic display as an emerging display technology has received widespread attention [1–4]. It has many advantages such as fast response time and full-color compared to electrophoretic display [5–7]. In electro-fluidic devices, transparent polar liquids play the role of changing wettability on solid surfaces to realize various applications. The contact angle of polar liquid on solid surface is determined by Young’s equation as shown in Eq. 1.

When a voltage is applied across the polar liquid and solid, the contact angle of polar liquid on solid surface will be changed, and it obeys Young-Lippmann equation, as shown in Eq. 2.

Colored oils are so important in electrowetting display that lots of special dyes have been disclosed in previous research, such as the designation of anthraquinone dyes [8, 9], azo dyes [10–14], dipyrrole methane metal dyes [15], and pigment dispersion [16, 17]. However, all the dyes are mono-chromophore structure, which cannot avoid the backflow caused by dye’s polarization.

The tendency of oil to flow back into pixel at a constant voltage is called “backflow”. The reduction of oil contraction affects the pixel aperture for “backflow” oil, which has an impact on the power consumption of the display. Since a static reading mode is operated for an EFD display, low “backflow” oil will lead to the decrease of refresh rate for display. Thus, the power consumption can be reduced because of its scaling with the refresh rate. Studies have shown that the addition of polar dye molecules has a negative effect on ink reflow [18, 19]. Due to their polarities, the dye molecules are oriented under an external electric field, and the affinity between the oil and the hydrophobic layer increases. Polarized dye molecules also tend to cause external charges and penetrate at the three-phase contact line of the ink-water-insulation layer, which eventually caused the electrostatic force F.

In this paper, azopyrazolone dye is used as the chromophoric matrix to construct a multi-chromophore macromolecular dye system, using binding effect of the bridge group in space to reduce the dipole moment of the entire molecule, thereby reducing the backflow effect of oils under external electric field. The polychromatic azopyrazolone-type molecules have an increased degree of chromophore aggregation, which may strengthen the chromophore’s bridge-based molecular skeleton energy transfer channel, induction effect, and covalent bond action. Therefore, the design of this type of dye has high solubility, absorption coefficient and light stability.

Dyes and solvents were calculated and weighted in a cell, dissolved, and filtrated with a 0.2 μm filtrator. The filtration was collected as EFD oil and used to formulate EFD device followed by our previous process [21]. 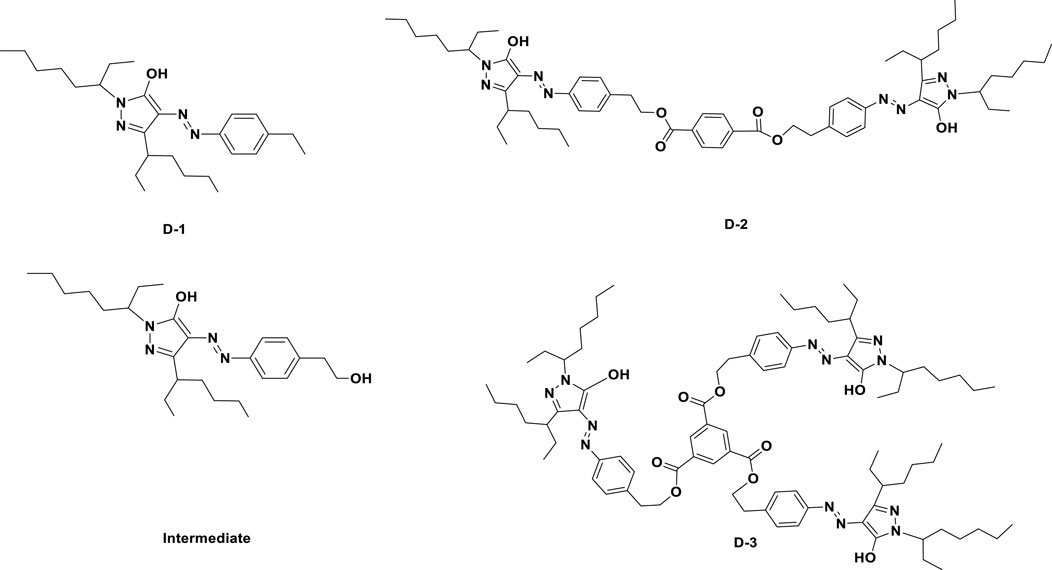 FIGURE 1. Molecular structures of the Intermediate and three synthesized dyes. 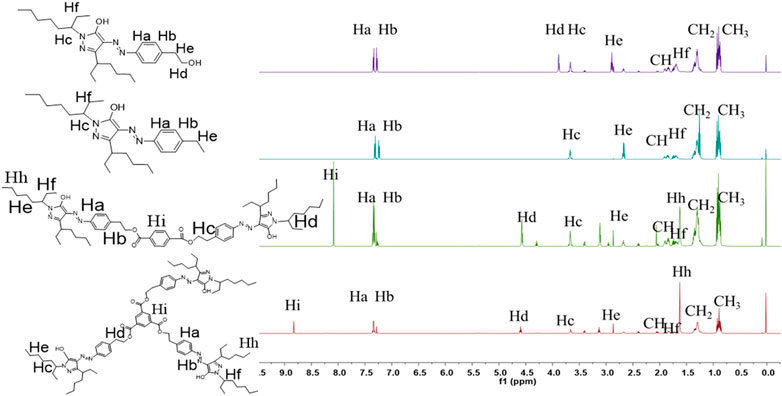 As can be seen in Figure 3, the uv-visible absorption spectra and data of all the dyes were recorded in decane. It is found that the maximum wavelength numbers (λmax) of three dyes D-1/3 are all at 420 nm, showing a same color of yellow. The maximum wavelengths are independent with the number of chromophoric matrix. The molar extinction coefficients of the three dyes are 11,730, 38,470 and 49,710 L mol−1·cm−1 for D-1, D-2 and D-3, respectively. And we can see from Figure 3B, as the number of chromophore increase, the molar extinction coefficient of the dyes increase. 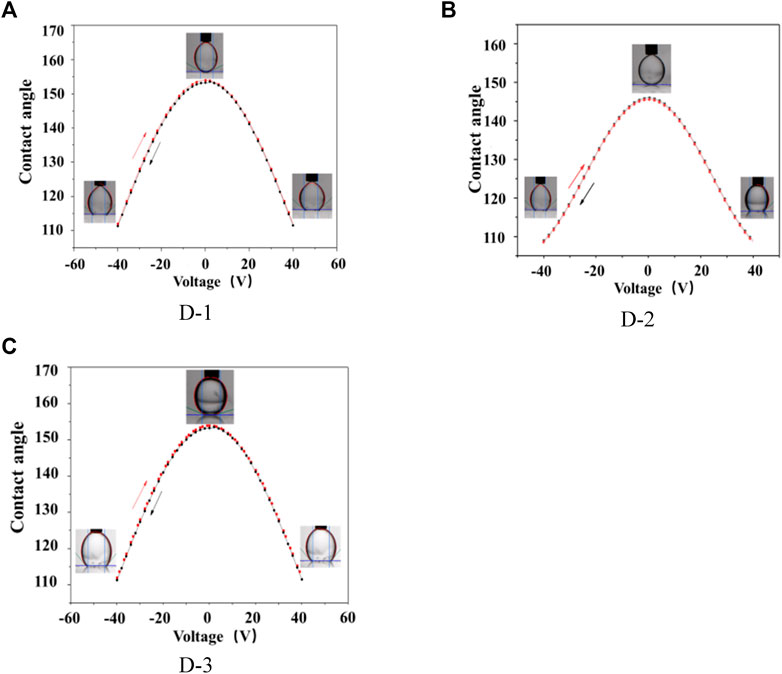 The photoelectric response properties of D-1/3 dyes were demonstrated by measuring the capacitance of the EFD cell under different voltage. The results could be seen in Figure 6. As the voltage raise from 0 to 40 V, we can see that the capacitance of the cell has an abrupt change point at 26 V, showing that the oil begins to break up and shrink at 26 V, which is called the threshold voltage. When the voltage decreased from 40 to 0 V, we can see that the capacitance of the cell decreased gradually as expected, which didn’t suffer an abrupt change. The CA hesterisis and existing of oil film rupture corresponded threshold voltage caused the asymmetry of the C–V curves in ON and OFF process. D-3 has more smoothly curve when the voltage decrease, that’s because D-3 has lower electric susceptibiltiy than D-1, the retracted oil drop is more stable at certain voltage. The photos of EFD device at ON and OFF states were recorded, and the aperture ratios were calculated in photoshop software. The aperture ratio of D-1 and D-3 could reach as high as 68.5 and 75% respectively.

As researched by G. Baxter and Shufen Zhang, the dye molecules under aggregation state have stronger internal molecular force, which makes it easier to transfer energy, thus the aggregation have much better light stability. The light stability comparison of multi-chromophore dye and corresponding mono-chromophore dye were researched. The test was carried under accelerated xenon lamp for 100 h at 45°C, which can translate to several years of normal conditions [22].

TABLE 1. Color change (ΔE) of two formulated dyes before and after accelerated irradiation.

In summary, we have constructed a multi-chromophore macromolecular dye system and synthesized three EFD oil materials based on azo pyrazolone dyes. The absorption, electrical-optical response, and light-stability of these dyes were researched in detail. The three-chromophore dye D-3 has higher aggregation and lower polarity than mono-chromophore dye D-1, thus it has low backflow effect and good light-stability. The research showed that low polarity and high degree of dye aggregation can highly increase the light-stability property and decrease the backflow of EFD oil.

HJ and YD conceived the idea; YD conducted the analyses; HJ, DY, YG, and GZ provided the data; all authors contributed to the writing and revisions.

This work was supported by National Natural Science Foundation of China (22,008,156), Program for Guangdong Innovative and Enterpreneurial Teams (No. 2019BT02C241), Science and Technology Program of Guangzhou (No. 2019050001, No. 201904020007), Program for Chang Jiang Scholars and Innovative Research Teams in Universities (No. IRT_17R40), National Natural Science Foundation of Guangdong, China (2018A0303130059), Guangdong Provincial Key Laboratory of Optical Information Materials and Technology (Grant No. 2017B030301007), Guangzhou Key Laboratory of Electronic Paper Displays Materials and Devices (201,705,030,007), MOE International Laboratory for Optical Information Technologies and the 111 Project.

Copyright © 2021 Deng, Ye, Guo, Zhou and Jiang. This is an open-access article distributed under the terms of the Creative Commons Attribution License (CC BY). The use, distribution or reproduction in other forums is permitted, provided the original author(s) and the copyright owner(s) are credited and that the original publication in this journal is cited, in accordance with accepted academic practice. No use, distribution or reproduction is permitted which does not comply with these terms.