In this study, an evolution equation of void ratio was incorporated into a generalised plastic model that was established within the framework of critical state soil mechanics. In the model, current void ratio and particle breakage index were regard as two state-dependent variables updating with the variation of volumetric strain and shifting the critical state line, respectively. The model was used to simulate the mechanical responses of four types of gravelly soils during triaxial tests. By analysing the simulation results, constitutive modelling effectiveness of considering evolution of void ratio and particle breakage was evaluated.

where and represent the increments of stress and strain , respectively. is the elastoplastic stiffness matrix, explicitly expressed as follows:

where is the elastic constitutive stiffness matrix. and are the normalised plastic flow and plastic loading direction, respectively. denotes the plastic modulus.

Nakai [14] provided the following Eqs 3, 4 to describe the elastic and plastic volumetric strains of sands under isotropic consolidation.

Using Eq. 3 and Poisson’s ratio , the elastic bulk modulus and shear modulus can be defined as follows:

As for gravelly soils, particle breakage remarkably changes the critical void state. This phenomenon was observed in triaxial tests [15,16]. In this study, a sigmoid function suggested by Liu et al. [3] was adopted to define the critical state line (CSL) influenced by particle breakage. That is:

where and are both the material constants. denotes the plastic dissipated energy that is calculated using:

In soil mechanics, it is always assumed that the volume of solid phase is constant during loading and volume change is only related to the void phase . Assuming , void phase volume is equal to void ratio . Thus, the change of void ratio causes an increment of volumetric strain. This relationship is formulated with:

The second formula in Eq. 9 is a differential equation. It has a solution expressed as follows:

In Eq. 10, the parameter can be determined using the initial condition. That is , .

The current void ratio , however, is not always just onto the CSL, but usually above or below the CSL. To identify the relative density state of soils, Been and Jefferies [18] proposed the following state parameter :

where is the deviatoric stress. Correspondingly, is the second-order stress tensor. is the Kronecker tensor, with , ; , . is a shape function of the failure criterion on the deviatoric plane. For simplification, is used in this study.

In Eq. 12, and are both material constants. Using Eq. 12, the critical stress state ratio is defined as the tangent slope of the strength envelope, that is:

where is a material constant for describing dilatation behaviour.

where is the plastic component of the equivalent shear strain .

In the stress plane, the plastic flow is given by Pastor et al. [8]:

As the nonassociated flow rule is assumed, the plastic loading direction is different with the plastic flow . For simplification, can be expressed in a formula similar to , as follows:

where is defined as the loading direction factor, which is a state variable related to critical state. Similar to , is defined as:

Under the isotropic compression condition, there is and . The incremental relationship between plastic volumetric strain and mean stress can be simply expressed as follows:

Additionally, the plastic volumetric strain increment can be determined by differentiating Eq. 4, that is:

Combination Eqs 19, 20 leads to the formula of plastic modulus :

Eq. 21 is only suitable for the isotropic compression condition. Inspired by Chen et al. [10], a formulation of plastic modulus , suitable for more general cases, was developed. That is expressed as follows:

This constitutive model has 15 material constants and can be classified into six groups. They can be determined using triaxial compression tests.

Initial void ratio can be determined using the following formula:

where is the specific weight of soil particles. and are the water content and density of soil mass, respectively. denotes the water density.

The critical state constants , , and are determined from the triaxial tests under small confining pressures, which no obvious particle breakage occurred. Eq. 6 (with ) is used to fit a number of data pairs . Then, the values of , , and can be determined.

The strength constants: and can be determined by fitting the strength data at the failure states using the strength criterion in Eq. 12. Because of nonlinearity of Eq. 12, at least three triaxial compression tests under different confining pressures are needed.

Using the test data of plastic volumetric and shear strains, can be calculated by . Certainly, it is difficult to depart the plastic strain increment from the total strain increment . For simplification, it is assumed that . By relating and , then using Eq. 15, can be determined.

If cannot be explicitly estimated, an available method is combining Eqs 6, 7 to fit a number of test data pairs on the CSL to indirectly determine the values of and .

3.2 Performance of the Proposed Model

The proposed model was used to simulate the mechanical behaviours of four gravelly soils: Hekouchun rockfill [21], Wudongde rock-soil aggregate [22] and crushed latite basalt [23]. The material constants of the gravelly soils are given in Table 1. The test data and simulation results are shown in Figures 1–3. In these figures, the scatter symbols and curves represent the test data and modelling results, respectively.

TABLE 1. Material constants of the gravelly soils simulated in this study. 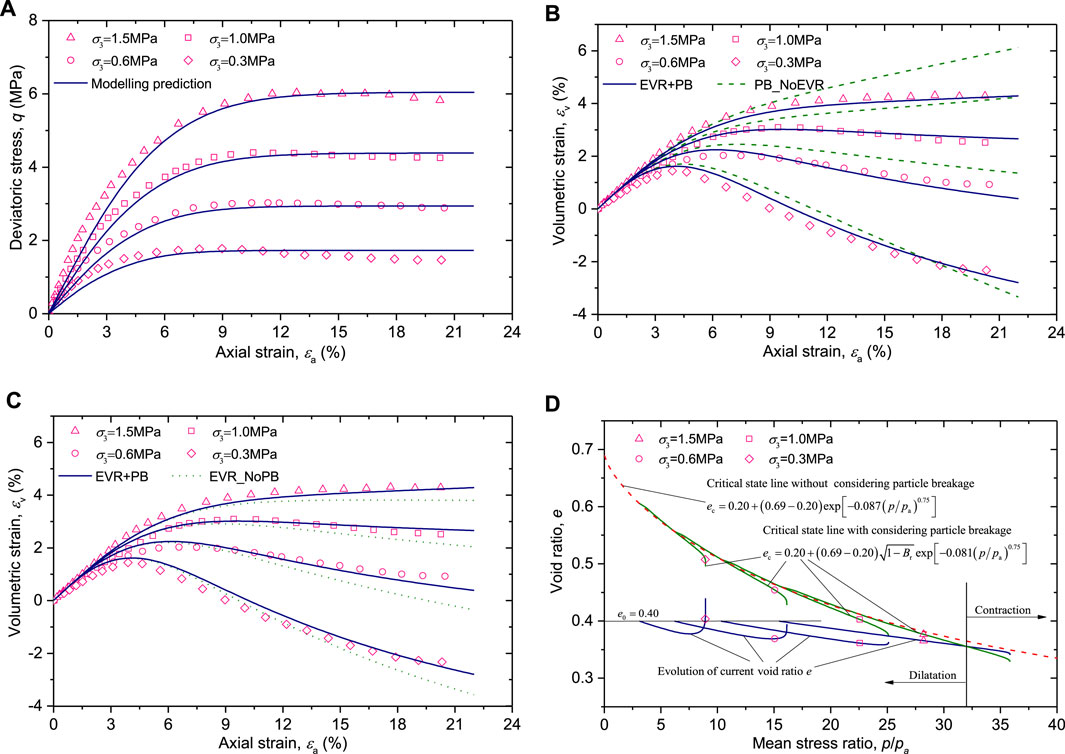 FIGURE 1. Model predations and experimental results of the Hekouchun rockfill (test data were from [21]). 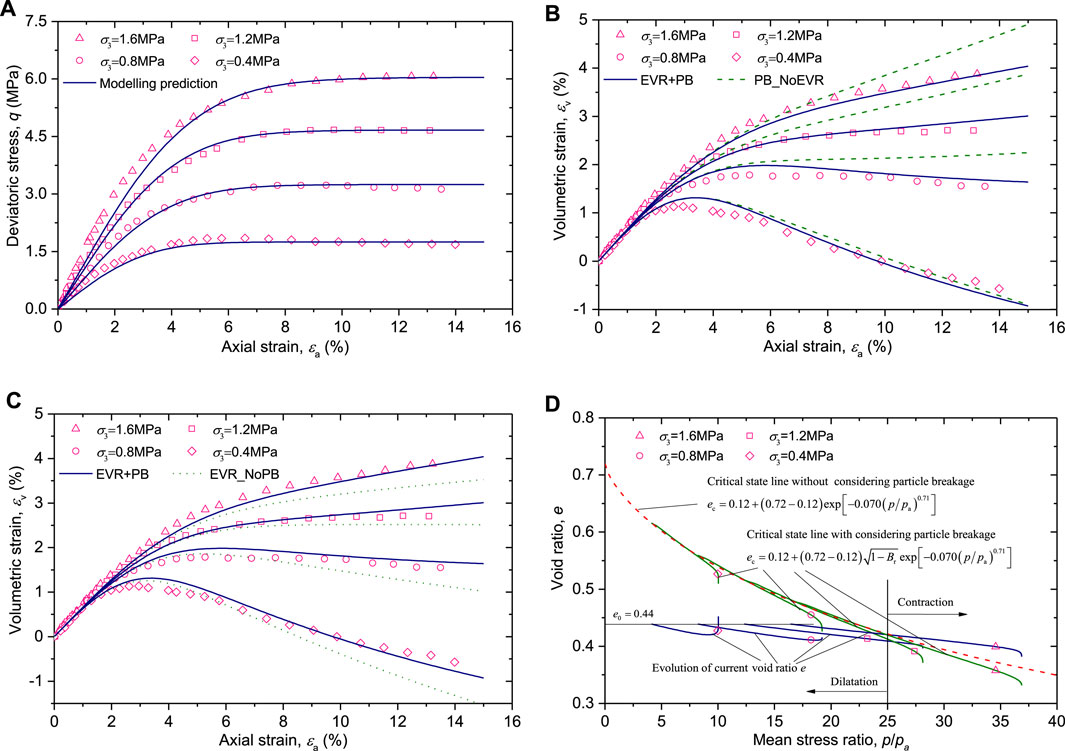 FIGURE 2. Model predations and experimental results of the Wudongde rock-soil aggregate (test data were from [22]). 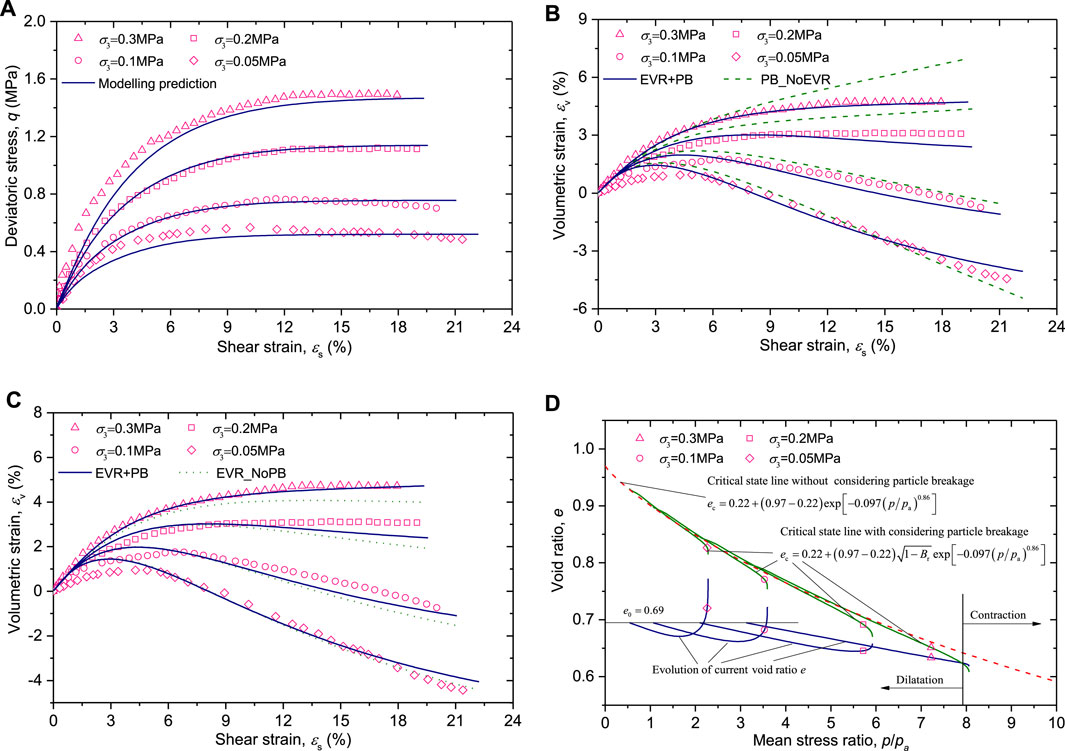 FIGURE 3. Model predations and experimental results of the crushed basalt (test data were from [23]).

Two factors: particle breakage and evolution of void ratio were taken into account to formulate the constitutive model. To observe their influences on the modelling effectiveness, three computing conditions were comparatively analysed. They are termed as:

A “EVR + PB”, which represent that the modelling predictions consider the compound effects of evolution of void ratio and particle breakage.

B “PB_NoEVR”, which represent that the modelling predictions only consider the effect of particle breakage.

C “EVR_NoPB”, which represent that the modelling predictions only consider the evolution of void ratio.

In the model, the shapes of numerical modelling curves are mainly controlled by the material constants: , , , , and . Thus, EVR + PB, PB_NoEVR and EVR_NoPB obtain almost the same modelling predictions of curves.

As seen from Figure 1 in both stress-strain and volume deformation responses, there is a good agreement between the test data and modelling predictions. Figure 1A shows that the model is capable of capturing the deformation and strength behaviours of Hekouchun rockfill material over a range of confining pressures from 0.3 to 1.5 MPa. Figures 1B,C show the testing volumetric strains and modelling results predicted by EVR + PB, PB_NoEVR and EVR_NoPB. It is found that, on the whole, EVR + PB achieves better simulations, but PB_NoEVR and EVR_NoPB overestimates and under-predicts the volumetric contraction strains, respectively.

The evolution curves of current and critical-state void ratios modelled by EVR + PB are shown in Figure 1D. The ideal CSL without considering particle breakage is plotted using a red dash curve. It is found that the realistic CSLs are influenced by particle breakage and gradually depart from the ideal CSL with the increase of mean stress. When the confining pressure increases, the volume-contraction behaviour of Hekouchun rockfill material becomes more prominent. The evolution rule of current void ratio is consistent with the volume changing rules.

Wudongde rock-soil aggregate was a type of natural gravelly soil, sampled from an ancient landslide mass, which was located downstream of the Wudongde Hydropower Dam on the Jinsha River, southwest China. Huang et al. [22] conducted large-scale triaxial tests on the Wudongde rock-soil aggregate under the confining pressures of 0.4, 0.8, 1.2, and 1.6 MPa. The material constants are listed in Table 1 and the modelling results are compared with test data in Figure 2.

Figure 2A shows that the modelling stress-strain relations exhibit good agreements in accordance with the test data. Figures 2B,C show that EVR + PB provides more accurate modelling predictions. PB_NoEVR overestimates volume contraction strains. EVR_NoPB tends to over-predict the volume-dilatation behaviour. In Figure 2D, it is found that EVR + PB modelling curves of current and critical-state void ratios have an intersection point at . This indicates that, at this mean stress state, the volume deformation transits from dilatation to contraction. Therefore, it is reasonable to deduce that, under the confining pressure of 1.6 MPa, Wudongde rock-soil aggregate undergoes a phase change from relative dense to loose state.

Salim and Indraratna [23] used a series of confining pressures: 0.05, 0.1, 0.2, and 0.3 MPa to conduct large-scale triaxial tests on a type of crushed latite basalt. Although the confining pressures were relatively lower, the volumetric strains had still undergone a transition from dilatation to contraction. Table 1 lists the material constants of the crushed latite basalt. Figure 3 shows the test data and modelling predictions.

Figure 3A indicates that the model is capable of reproducing the stress-strain relations of the crushed latite basalt. The testing and modelling volumetric strains are compared in Figures 3B,C. Under the confining pressures of 0.05 and 0.1 MPa, EVR + PB, PB_NoEVR and EVR_NoPB achieve relatively better simulations for the volume-dilatation behaviour. With an increase of confining pressure, PB_NoEVR predicts larger volumetric contraction strains. This phenomenon may be related to that PB_NoEVR overestimates the gap between the current void ratio and the CSL. Figure 3D shows the EVR + PB modelling curves of current and critical-state void ratios. Upward-bending evolutions of current void ratios indicates that volume-dilatation responses occur under the confining pressures of 0.05, 0.1, and 0.2 MPa. Under the confining pressure of 0.3 MPa, when the mean stress ratio , volume deformation of the crushed latite basalt transits from dilatation to contraction.

In this study, a generalised plastic model considering evolution of void ratio and particle breakage was developed for gravelly soils. The model was used to simulate the mechanical behaviours of four gravelly soils. By comparing three computing conditions: EVR + PB, PB_NoEVR, and EVR_NoPB, the effects of void ratio evolution and particle breakage on the modelling predictions were analysed. Following conclusions can be summarised:

1. Because the evolution of void ratio and particle breakage are not considered in the constitutive descriptions of stiffness and strength behaviours, the three computing conditions: EVR + PB, PB_NoEVR, and EVR_NoPB predict almost the same relations between deviatoric stress and axial strain.

3. Under the EVR_NoPB computing condition, the ideal CSL is used and current void ratio evolves with the variation of volumetric strain. Overall, EVR_NoPB underestimates the volume-contraction strains and overestimates volume-dilatation strains.

The work presented in this paper were financially supported by Open Funds at the Key Laboratory of Geological Hazards on Three Gorges Reservoir Area (China Three Gorges University), Ministry of Education (Grant Nos. 2015KDZ16 and 2015KDZ15).

Copyright © 2021 Zhang, Li and Wang. This is an open-access article distributed under the terms of the Creative Commons Attribution License (CC BY). The use, distribution or reproduction in other forums is permitted, provided the original author(s) and the copyright owner(s) are credited and that the original publication in this journal is cited, in accordance with accepted academic practice. No use, distribution or reproduction is permitted which does not comply with these terms.

Microscopic Structure Effect on the Macroscopic Property of Geomaterials