PANI/TiO2 nanocomposites spheres were synthesized using a simple and efficient one-step hydrothermal process. The morphology and structure of PANI/TiO2 nanocomposites spheres were investigated by X-ray diffraction (XRD), scanning electron microscopy (SEM), and transmission electron microscopy (TEM) techniques. The PANI/TiO2 nanocomposite sphere-based sensor exhibits good selectivity, sensitivity (5.4 to 100 ppm), repeatability, long-term stability and low detection limit (0.5 ppm) to ammonia at room temperature (20 ± 5°C). It also shows a good linearity relationship in the range of 0.5–5 and 5–100 ppm. The excellent NH3 sensing performance is mainly due to the formation of the p-n heterostructure in the nanocomposites.

Polyaniline (PANI), as an intrinsically conductive polymer, is the widely used material in anti-corrosion, anti-static electricity, stealth and so on. Since its low density, excellent processability, excellent flexibility, and good electrical conductivity, (Bhadra et al., 2009; Baker et al., 2017) polyaniline is also attracting more attention in the field of gas sensing. However, pure PANI sensors often show lower sensitivity or higher detection limit than semiconductor metal oxide sensors (Sutar et al., 2007; Kebiche et al., 2012). The addition of semiconducting metal oxides not only improves gas-sensing properties, but also avoids high operating temperatures. In recent years, SnO2, ZnO, TiO2, and In2O3 have been chosen as the addition of polyaniline to prepare ammonia sensors, which can used at room temperature (Guo et al., 2013; Chen et al., 2015; Dai et al., 2016; Zhang et al., 2018). Most of the materials reported so far have been prepared by electrospinning, interfacial synthesis, or mechanical mixing (Talwar et al., 2014; Li et al., 2015; Nie et al., 2016). Pawar et al. synthesized PANI and TiO2 by chemical oxidative polymerization and sol-gel method, respectively. Then, they mixed PANI and TiO2 by mechanical mixing method to prepare PANI-TiO2 nanocomposites. The response of the sensor to 100 ppm NH3 is 50% (Pawar et al., 2011a). Liu et al. prepared the PANI-TiO2-Au ternary nanocomposite thin film by in-situ self-assembly method. The response of the sensor is 2.23 toward 50 ppm NH3, and the detection limit is 1 ppm (Liu et al., 2017). Their synthetic methods basically need more than one-step reactions. And the recovery time, sensitivity and other properties of the sensors need to be further improved.

In this work, the PANI/TiO2 nanocomposite was synthesized by one step hydrothermal method. The PANI/TiO2 nanocomposite exhibits good selectivity, sensitivity (5.4 to 100 ppm), repeatability, long-term stability, and low detection limit (0.5 ppm) to ammonia at room temperature. Meanwhile, the sensor exhibits a good liner relationship in the range of 0.5–5 and 5-100 ppm.

All reagents were of analytical grade, offered by Aladdin Reagent Company, and used without further purification.

1.147 g of ammonium persulfate (APS) was added to 10 mL of HCl (1 mol·L−1) to obtain solution A. In 10 mL of anhydrous ethanol, tetrabutyl titanate (TBT), and 0.47 mL of aniline were added to obtain solution B. Solution C is the mixture of 10 mL absolute ethanol and 0.47 mL aniline. The mixture solution of A and B were poured into a 50 mL Teflon-lined stainless steel autoclave and kept at 100°C for 2 h. The mixtures of solution A and C were treated as the same. The PANI/TiO2 nanocomposite and pure PANI was obtained after washing several times by deionized water and ethanol. With other conditions remaining constant, the amount of TBT added in solution B is 0.05, 0.1, 0.15, or 0.2 mol·L−1, respectively, to make products PT1, PT2, PT3, PT4. The synthetic routes of the samples are shown in Scheme S1.

Fabrication and Gas Sensing Measurement of the PANI/TiO2 Nanocomposites Sensors 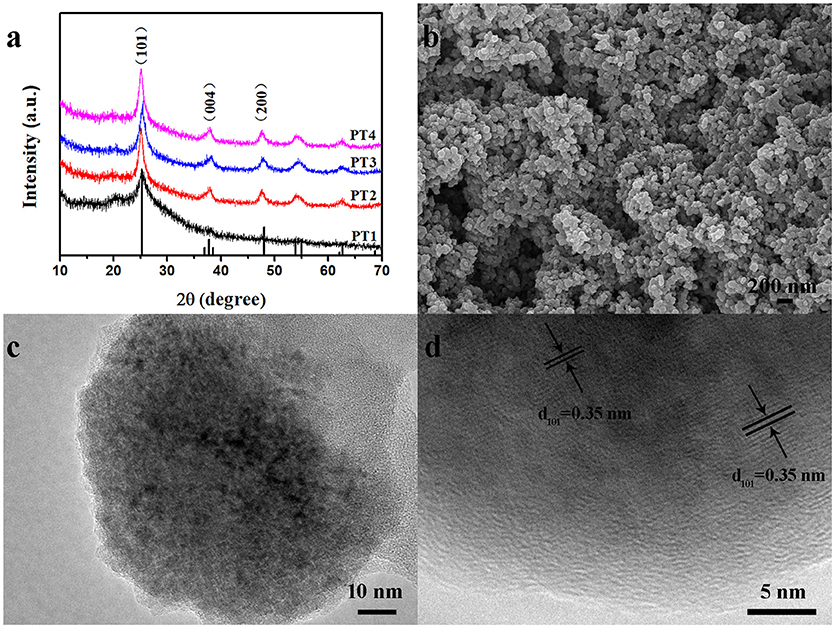 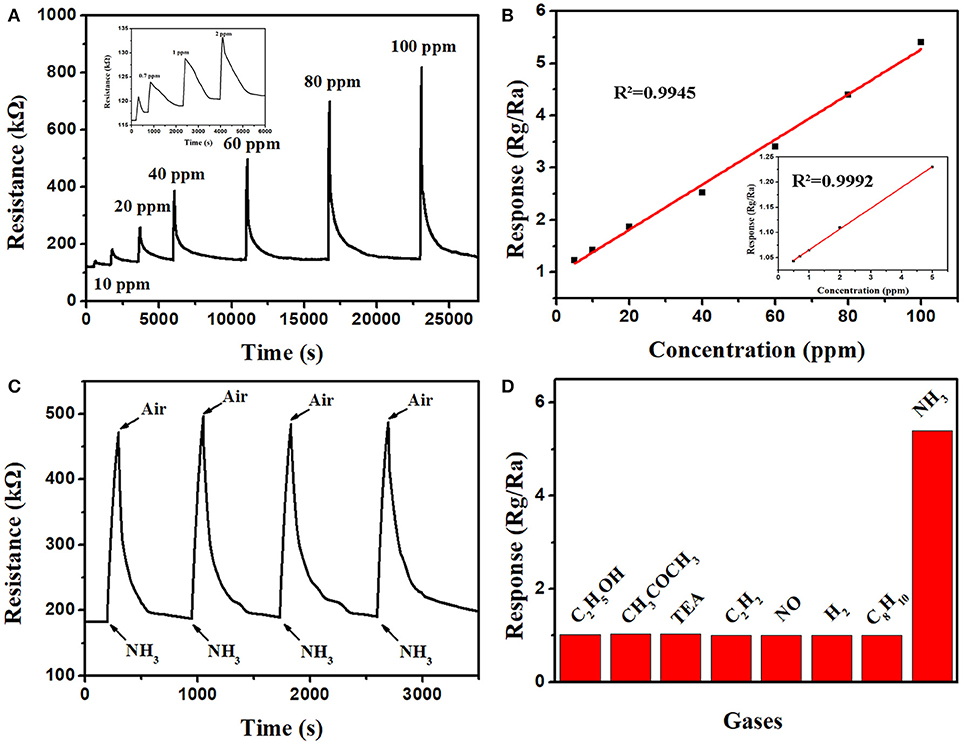 Compared the gas sensing property between the PANI-TiO2 nanocomposites sensor with the reported sensor in Table 1. The results show that the PT3 nanocomposites sensor exhibits excellent sensitivity and good response to NH3 gas at room temperature. The detection limit of PANI-TiO2 nanocomposites sensor is lower and sensitivity is better than the other reported sensors. The improvement of the NH3 sensing property of PT3 sensor is might attributed to the following reasons. First, One-step synthesis is more conducive to the dispersion of titanium dioxide nanoparticles on the surface of PANI. Secondly, the p-n heterostructure formed between TiO2 and PANI can provide a synergistic effect, which can effectively improve the ability to adsorb NH3. Therefore, the PT3 nanocomposites has potential application value in detecting NH3 at room temperature.

The possible sensing mechanism of the PT3 nanocomposites sensor for detecting NH3 is as shown in Figure S8. TiO2 is an n-type semiconductor with a 3.2 eV forbidden band width. And PANI is a p-type semiconductor with a 2.8 eV forbidden band width. At the contact interface, the TiO2 and PANI interact to form a p-n heterostructure. The p-n heterostructure will make a positively charged depletion layer. So, the activation energy and enthalpy of physisorption for NH3 will reduce as a result to cause the enhancement of gas sensitivity (Costello et al., 1996; Tai et al., 2010). In addition, the LUMO level of PANI and the conduction band of TiO2 are well helps charge transfer. It can also effectively improve the gas sensing performance (Li et al., 2006; Tai et al., 2008). When the sensor is exposed to NH3, H+ on -NH- site of PANI combines with NH3, cause the electron hole concentration in the PANI to be low. The resistance of the sensor will increase. When the sensor is exposed to air after NH3, PANI gets H+ from , the electron hole concentration of PANI recovers. The resistance decreases to the initial value (Figure S8b).

In summary, the PANI/TiO2 nanocomposites, which is consisted of uniform nanoparticles, are synthesized by one-step hydrothermal synthesis. At room temperature, the sensor based on PANI/TiO2 nanocomposites has a good linear relationship (0.9945 to 5–100 ppm), high response to NH3 (5.4 to 100 ppm), and the detection limit is 0.5 ppm. The response and recovery time to 100 ppm NH3 is 100 and 232 s, respectively. With small humidity effects, the sensor exhibits excellent selectivity, good reproducibility and long-term stability to NH3. Moreover, the excellent gas sensing property of PANI/TiO2 nanocomposites can be rewarded to p-n heterostructure. The more charge transfer on the surfaces where PANI is in contact with TiO2, the beter gas-sensing performance of PANI/TiO2. These results illustrate that the PANI/TiO2 nanocomposites sensor has great potential application for detecting NH3 at room temperature.

CZ performed the experiments, analyzed the data with the help from YX and XC. XD wrote the manuscript with input from all authors. YX conceived the study. All authors read and approved the manuscript.

This work is financial supported by International Science & Technology Cooperation Program of China (2016YFE0115100), National Natural Science Foundation of China (21771060, 21547012, and 21305033), the Project of Natural Science Foundation of Heilongjiang Province (No. B2015007), and the Project of Nitro Graduate Innovation Research of Heilongjiang University (YJSCX2018-062HLJU). We thank the Key Laboratory of Functional Inorganic Material Chemistry, Ministry of Education, Heilongjiang University for supporting this study.

The Supplementary Material for this article can be found online at: https://www.frontiersin.org/articles/10.3389/fchem.2018.00493/full#supplementary-material

Copyright © 2018 Zhu, Cheng, Dong and Xu. This is an open-access article distributed under the terms of the Creative Commons Attribution License (CC BY). The use, distribution or reproduction in other forums is permitted, provided the original author(s) and the copyright owner(s) are credited and that the original publication in this journal is cited, in accordance with accepted academic practice. No use, distribution or reproduction is permitted which does not comply with these terms.