The main objective of cancer treatment with chemotherapy is to kill the cancerous cells without affecting the healthy normal cells. In the present study, bioactivity-guided purification of the n-chloroform soluble fraction from the methanol extract of Roscoea purpurea resulted in the identification of two new labdane diterpenes: coronarin K (1) and coronarin L (2), along with eight known compounds, coronarin A (3), bisdemethoxycurcumin (4), kaempferol 3-O-methyl ether (5), kaempferol (6), fenozan acid (7), 3-(3-methoxy,4-hydroxyphenyl)-2-propenoic acid ferulic acid (8), caffeic acid (9), and gallic acid (10). The structural identification of new compounds (1 and 2) were determined by detailed analysis of 1D (1H and 13C) and 2D NMR (COSY, HSQC, and HMBC) spectroscopic data. The relative configurations of 1 and 2 were determined with the help of NOESY correlations and comparison of optical rotations with known labdane diterpenes, with established stereochemistry, while structure of known compounds was established by direct comparison of their NMR data with those reported in the literature. This is the first report of isolation of this labdane diterpenes and phenolic classes of secondary metabolites in R. purpurea. In the preliminary screening, the methanol extract and its fractions were tested for the cytotoxic activity against a panel of four cancer cell lines (A549, HCT-116, Bxpc-3, and MCF-7); extract and its chloroform fraction were found to be active against the lung cancer cell line, A-549, with IC50 value <25 μg/ml. Owing to the notable cytotoxic activity of the chloroform fraction, the compounds (1–5) were screened for their cytotoxicity against all the cell lines by MTT assay. Coronarin K, 1 showed significant cytotoxic potential against lung cancer cell lines (A-549), with IC50 value of 13.49 μM, while other compounds did not show activity below 22 μM.

In our continuing research program to discover bioactive natural products from natural resources, especially from high-altitude Himalayan endangered medicinal plants, with profound biological activities, our attention was focused on the rhizomes of Roscoea purpurea, commonly known as kakoli, which belongs to the family of Zingiberaceae that is abundantly available in alpine grassland, grassy hillsides, and stony slopes of central to eastern Himalaya from Uttarakhand to North East states, up to an altitude of 3,300 m. It is an essential ingredient of an important Ayurvedic preparation, known as Astavarga, which is a group of eight plants claimed to be useful for healing weakness, body overweight, bone fractures, high fever, and diabetic situations, as well as for healing vata, pitta, and rakta doshas (Dhyani et al., 2010). The groups of Astavarga plants are considered as a very excellent Rasayana, with health-promoting and rejuvenating properties, and are recognized to support our immunity and have the capacity for cell renewal (Balkrishna et al., 2012). Astavarga plants are also known to restore human health and work as strong antioxidants in our body (Mathur, 2003; Pandey, 2005; Sharma and Balkrishna, 2005). Among the eight Astavarga plants, R. purpurea is one of the essential ingredients of several herbal formulations like tonic and Chyawanprash. Traditionally, it is used for the cure of diabetes, diarrhea, hypertension, fever, immunostimulant, inflammation, etc. In Nepal, its tubers are boiled for an edible purpose and are also used in traditional veterinary medicine (Singh and Rawat, 2011). In view of its significance in the Ayurvedic medicinal system, substantial pharmacological and phytochemical works have not been carried out. Previous phytochemical studies on R. purpurea have described the isolation of two principal groups of compounds: steroids and phenolic derivatives (Misra et al., 2015; Srivastava et al., 2015; Rawat et al., 2016). To date, only a few compounds have been identified and quantified through high-performance liquid chromatography (HPLC) analysis from tubers of this plant by Singh and co-workers, and they are presumed to be associated with its potent antioxidant activity (Gopal et al., 2014; Rawat et al., 2014). Alcoholic extracts of the plant have shown in vitro anti-cancer (Srivastava et al., 2015), antioxidant (Rawat et al., 2016), and immunomodulatory activities (Sahu et al., 2010). In our preliminary pharmacological study, cytotoxic activity was found for the methanol extract of R. purpurea against lung cancer cell line at IC50 25.71 (μg/ml). On bioassay-guided fractionation, activity was localized in a chloroform-soluble fraction. Further work led to the isolation of two new compounds, along with eight known compounds for the first time from this plant species. In the present paper, we have described isolation and structure elucidation of two new compounds from the rhizomes of R. purpurea and the anti-cancer activities of plant extract, fractions, and isolated compounds.

Rhizomes of R. purpurea Sm. (Syn: Roscoea procera Wall.) were collected in September 2013 from Dhanaulti, Mussorie in district Tehri Garhwal of Uttarakhand, India (between 2,500 and 3,200 m asl). The crude herb was authenticated by Dr. Sumeet Gairola, and the voucher specimen (CDR No. 4027) was deposited in the Crude Drug Repository of CSIR-IIIM, Jammu. 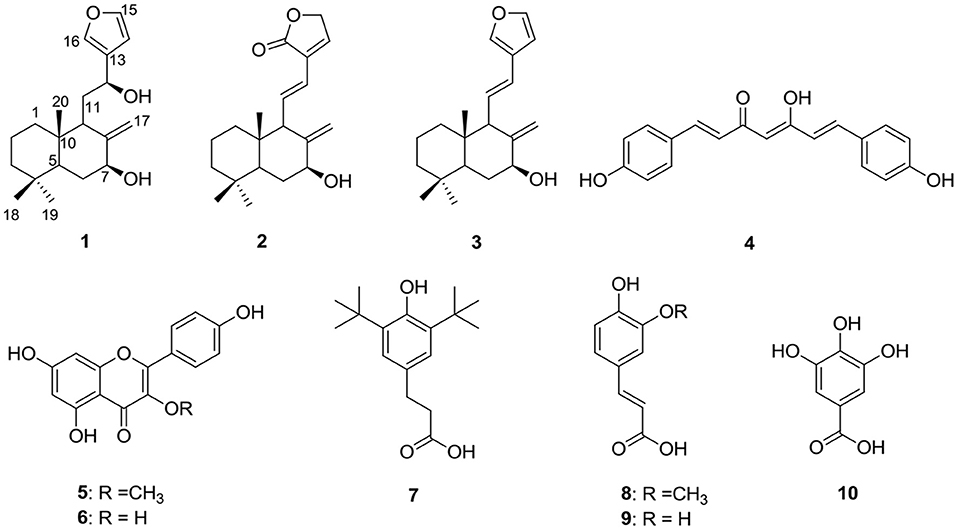 Different human cancer cell lines—the lung (A549), the colon (HCT-116), the breast (MCF-7), and the pancreas (Bxpc-3)—were obtained from the National Cancer Institute, Frederick (NCI), United States. Bxpc-3 and HCT-116 cell lines were maintained in DMEM, and A549, MCF-7 cell lines were maintained in RPMI. FBS (10%), penicillin (100 units/ml), streptomycin (100 μg/ml), and glutamine (2 mM) were used for supplementation. Cells were grown at 37°C in 5% CO2 (incubator, Thermo Scientific, United States), with 98% humidity. The concentration of DMSO added to the test materials was maintained at <0.2%.

Colorimetric MTT assay was used to carry out cell viability studies (Kumar et al., 2013). The plant extract and isolates were screened at different concentrations with a maximum concentration of 100 μM. The cells were rinsed and incubated with 20 μl of MTT dye after treatment at different time intervals. The medium was removed, and DMSO was added to each well after incubation for the solubility of purple formazan crystals. Microplate Reader (BioTek Synergy HT) was used to measure the absorbance at 570 nm. GraphPad Prism Software (La Jolla, CA, United States) was used to determine cell viability percentage and IC50 values.

Lung cancer cell line (A-549) seeded in six-well plates (2 × 105) was treated with coronarin K 1 (7, 13, 18 μM) and incubated for 48 h. H2O2 was added to a well containing a medium for 2 h before termination. The cells were further incubated with 10 μM DCF for 30 min at 37°C in the dark. The cells were washed with PBS and analyzed with a fluorescence microscope (Olympus-1X53 magnification). The fluorescent intensity was measured at the emission and excitation wavelength of 480/530 nm (Banskota et al., 2015).

The dried and powdered rhizomes of R. purpurea were extracted with methanol and dried at 40–45°C. The obtained crude extract was sequentially fractionated with pet ether, CHCl3, and n-butanol. The chloroform soluble fraction was purified, using chromatographic techniques, which afforded two new compounds (1–2), together with 8 known compounds. The structures of both novel secondary metabolites were established, using detailed NMR spectroscopic studies, whereas the structures of known compounds were identified in comparison with the previously reported literature data. The 1H and 13C NMR spectra of compounds 1 and 2 have some common structural features of diterpenes based on the NMR data and gave a positive copper acetate test for diterpenes. 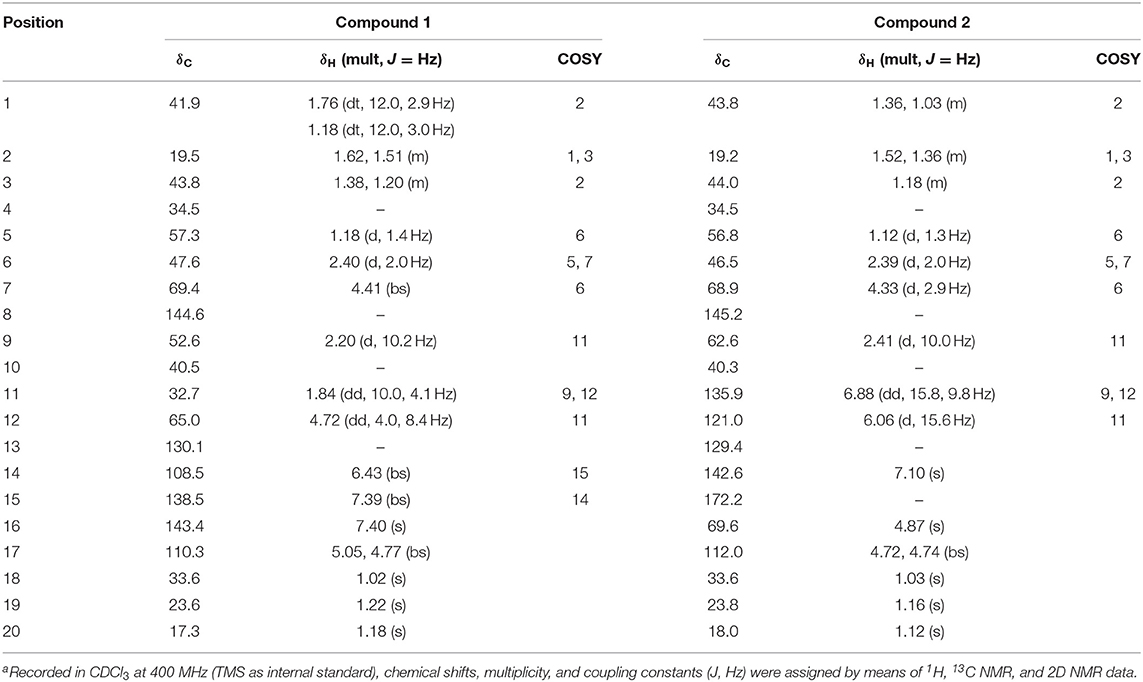 Figure 2. Key HMBC and NOESY correlations of compounds 1 and 2. 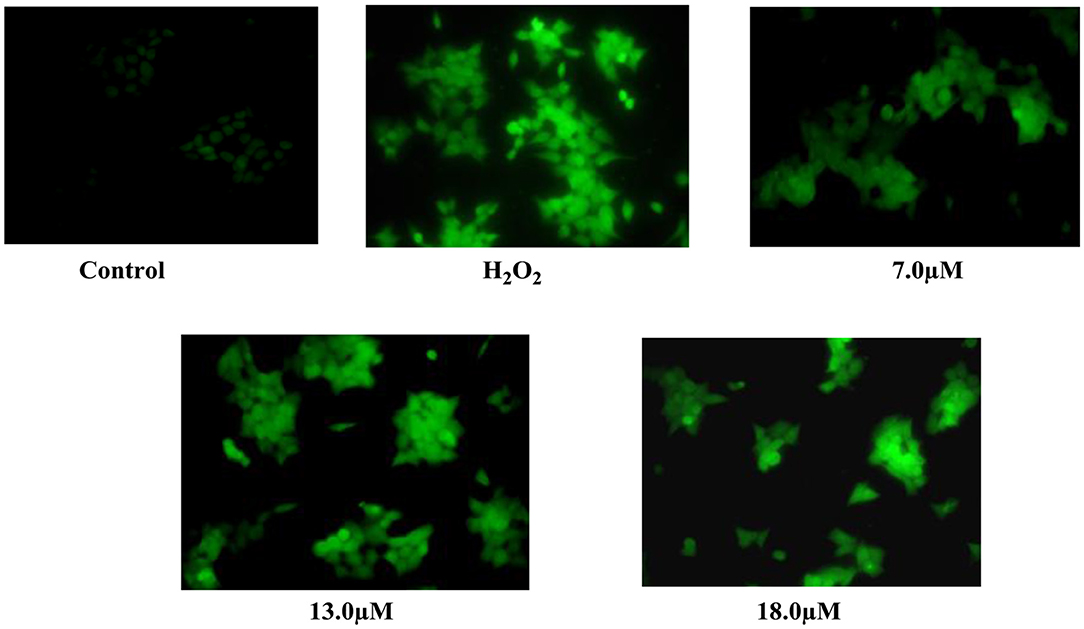 Figure 3. Effect of coronarin K (1) on cellular and nuclear morphology of A-549 in ROS production assessed from the oxidation of DCFDA by H2O2 through fluorescence microscopy at 48-h posttreatment.

Secondary metabolites, which were isolated from the plants of the Zingiberaceae family, have wide use as a new pharmacophore in anti-cancer drug discovery. In our bio-assay-guided isolation of novel anti-cancer agents from R. purpurea, the methanol extract and respective fractions were screened for their anti-cancer activity, using the MTT assay. The methanol extract and its CHCl3 fraction showed cytotoxic activity against lung cancer cell line (A549) at IC50 27.71 and 21.35 (μg/ml), respectively. After purification of chloroform fraction, compounds 1–10 were isolated. Only compounds 1–5 were evaluated for different cancer cell lines. Among the tested compounds, Coronarin K (1) showed prominent activity against lung cancer cell line (A-549) and also showed moderate cytotoxic activity against colon cancer cell line HCT-116 (IC50 value of 26.03 μM) but had no effect on Bxpc-3 and MCF-7 in acceptable limits. Compounds 2 and 3 were ineffective against all the cell lines except pancreatic cancer cell line (Bxpc-3) at IC50 value of 26.03 μM. The remaining tested compounds displayed less activity (Table 2). In a further study, the A-549 cells were treated with compound 1 at 7.0, 13.0, 18.0 μM, and ROS generation was detected in 48 h. Hydrogen peroxide was taken as a positive control. After exposing the cells with compound 1, the fluorescence intensity of DCF was increased in a dose-dependent manner. The results showed that compound 1 exhibited prominent cytotoxicity against human lung cancer cell line (A-549), with IC50 value of 13.49 μM (Figure 3) and thereby confirmed the ROS generation is crucial to cell death. 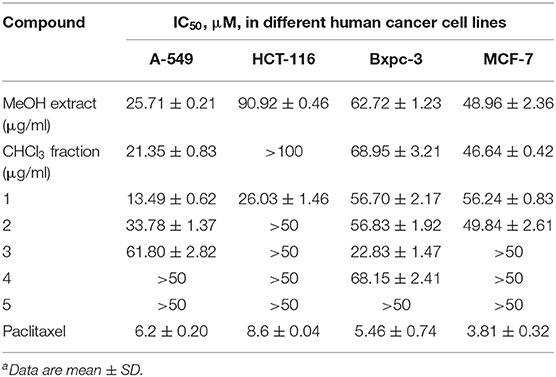 Table 2. Cytotoxicity of extract, fraction, and isolated compounds (1–5)a.

In the present study, by the cytotoxic activity-guided isolation of R. purpurea extract, we have made an unusual finding of two new labdane diterpenes coronarin K (1) and coronarin L (2), together with the other known compounds 3–10. All the compounds have been isolated physically for the first time from this plant. Furthermore, this is the first report of the natural origin (Fenozan acid 7) of a synthetic di-tert-butyl derivative in plants. In addition to this, we have evaluated the anti-cancer activity of extract, chloroform fraction, and isolated compounds. Among all the tested compounds, only coronarin K (1) showed prominent anti-cancer activity against lung cancer cell line (A-549). Our study also suggest that the antiproliferative effect of the compounds is due to ROS generation and also led to the impaired cell migration. Finally, our study strongly suggests that screening and detailed chemical study of endangered Astavarga plants would be valuable.

PG conceptualized and wrote the paper. VS and BL performed isolation and characterization of compounds. PK and SG helped in the collection and the identification of the plant material. JS and SS performed the anti-cancer activity. All the authors read and approved the final manuscript.

The Supplementary Material for this article can be found online at: https://www.frontiersin.org/articles/10.3389/fchem.2021.642073/full#supplementary-material

Copyright © 2021 Singamaneni, Lone, Singh, Kumar, Gairola, Singh and Gupta. This is an open-access article distributed under the terms of the Creative Commons Attribution License (CC BY). The use, distribution or reproduction in other forums is permitted, provided the original author(s) and the copyright owner(s) are credited and that the original publication in this journal is cited, in accordance with accepted academic practice. No use, distribution or reproduction is permitted which does not comply with these terms.