Liver X receptors (LXRs) belong to the nuclear hormone receptor superfamily and function as ligand-dependent transcription factors that regulate cholesterol homeostasis, lipid homeostasis, and immune responses. LXR antagonists are promising treatments for hypercholesterolemia and diabetes. However, effective LXR antagonists and inhibitors are yet to be developed. Thus, we aimed to develop LXR degraders (proteolysis targeting chimeras PROTACs against LXR) as a complementary strategy to provide a similar effect to LXR inhibition. In this study, we report the development of GW3965-PEG5-VH032 (3), a PROTAC capable of effectively degrading LXRβ protein. Compound 3 induced the ubiquitin-proteasome system-dependent degradation of the LXRβ protein, which requires VHL E3 ligase. We hope that PROTACs targeting LXR proteins will become novel therapeutic agents for LXR-related diseases.

Oxidized cholesterol derivatives (oxysterols) such as (22R)-22-hydroxycholesterol, (20S)-22-hydroxycholesterol, and (24S)-24,25-epoxycholesterol are known to be endogenous ligands for LXR, and they activate both LXRα and LXRβ (Baranowski, 2008). In addition, a variety of synthetic LXR ligands have been reported, including isoform-selective ligands (Kick et al., 2016; Kirchgessner et al., 2016). LXR agonists have potential applications as cholesterol-lowering drugs and treatments for atherosclerosis. However, their clinical use is limited because they promote hepatic steatosis by increasing hepatic lipid synthesis (Grefhorst et al., 2002; Viennois et al., 2012). On the other hand, inverse agonists (Griffett et al., 2013; Flaveny et al., 2015) and antagonists (Noguchi-Yachide et al., 2009; Moriwaki et al., 2014; Renga et al., 2015) for LXRs have been developed because inhibiting excessive activation of LXR in the liver is an appropriate strategy to improve hepatic lipid metabolism. However, they have issues with their weak activity and difficulty in chemical synthesis. Thus, the development of complementary strategies could help realize the full potential of LXR inhibition.

Proteolysis targeting chimera (PROTAC) technology has been receiving much attention as a novel strategy to degrade proteins of interest (POI) (Pavia and Crews, 2019; Sun et al., 2019). PROTACs are bifunctional molecules with a ligand for the POI and a ligand for an E3 ligase. PROTACs cross-link between the POI and E3 ligase, which in turn degrades POI by the ubiquitin-proteasome system (UPS). Hence, PROTACs are expected to be a promising tool for suppressing the function of disease-related proteins in drug discovery. Therefore, we hypothesized that we could produce promising compounds with LXR inhibitory activity by developing PROTACs using reported agonists (Gustafson et al., 2015). Herein, we report the design and synthesis of LXR-agonist-based PROTACs which exhibit LXR degradation activity via the UPS.

For PROTAC design, a potent LXRα/LXRβ agonist GW3965 (Collins et al., 2002) was selected because the binding mode between LXRα and GW3965 has previously been determined by X-ray diffraction (Fradera et al., 2010). In the co-crystal structure, the carboxyl group of GW3965 is oriented toward the outside of the protein (Figure 1A). Based on this structural information, we designed a GW3965-based PROTAC by linking the carboxyl group with an E3 ligase ligand via a polyethylene glycol linker (PEG3–PEG6). Two representative types of E3 ligase ligands, pomalidomide binding to cereblon (CRBN) and VH032 binding to Von Hippel-Lindau (VHL), were selected (Figure 1B). 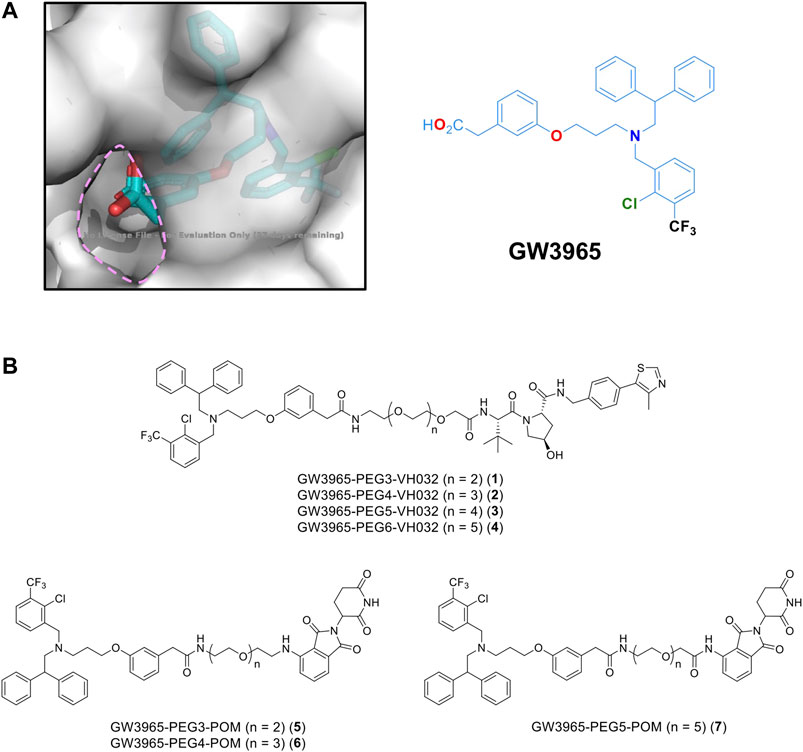 The representative synthetic route for VH032-based PROTACs, GW3965-(PEG3–PEG6)-VH032, 1–4 is shown in Scheme 1. Ligand GW3965 was conjugated with E3 ligase ligand VH032 with PEG linkers of different lengths via a condensation reaction using HATU/DIPEA or EDCI. Other molecules, including pomalidomide-based PROTAC, were also synthesized in a similar manner, as shown in the Supplementary Material.

The degradation activities of the synthesized chimeric compounds against target proteins, LXRα and LXRβ, that bind to GW3965 were evaluated by western blot using HuH-7 human hepatoma cells expressing the target proteins. Since we could not obtain the appropriate antibodies to detect endogenous LXRα, only the results for LXRβ are shown. We first evaluated the LXRβ reduction activities of a series of chimeric compounds containing different E3 ligands (pomalidomide for CRBN and VH032 for VHL) or different linker lengths (PEG3, PEG4, and PEG5). Compound 3 showed the most potent activity among them (Figure 2A and Supplementary Figure S8). To investigate the optimal linker length in the VHL series, compound 4 with PEG6 linker was synthesized. The reduction activity was almost lost with this linker extension, suggesting that the PEG5 length is optimal (Figure 2B). Compound 3 effectively reduced LXRβ protein levels even after 8 h (Figure 2C). The LXRβ binding affinity (EC50) of compound 3 was determined using a time-resolved fluorescence energy transfer (TR-FRET) assay with GW3965 as a positive control. This confirmed that the EC50 values of compound 3 (EC50 = 31 ± 4.4 nM) were comparable to that of GW3965 (EC50 = 20 ± 7.2 nM) (Table 1). As observed in the results of compound 3 and 7 (Figure 2A), the protein degradation efficacy by PROTAC molecules was often suppressed at higher concentrations, which is known as a hook effect (Bondeson et al., 2015). This effect is explained by the inhibition of ternary complex formation (E3-PROTAC-target) by an excess amount of bivalent compounds such as PROTACs. 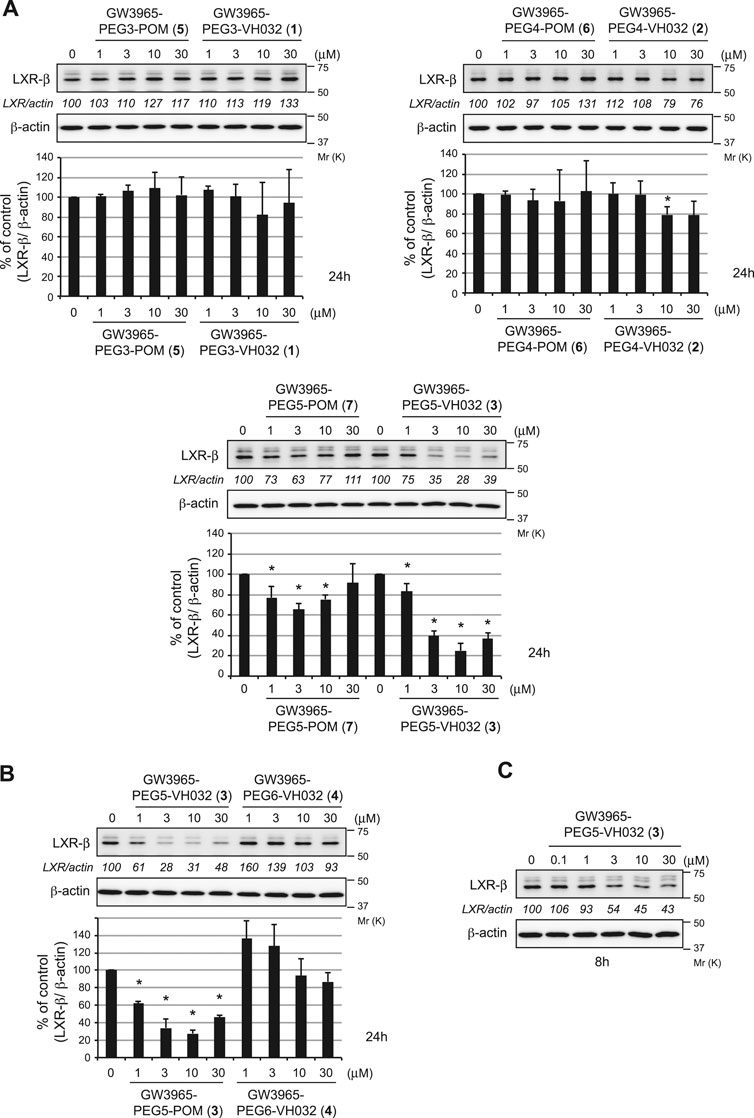 FIGURE 2. Degradation of the LXRβ protein by the synthesized compounds. HuH-7 cells that had been cultured in Dulbecco’s modified Eagle’s medium (DMEM) containing 10% fetal bovine serum (FBS) were treated with the indicated compounds for 24 h (A, B) or 8 h (C). Immunoblots of the cell lysates that had been stained with the indicated antibodies are shown (representative data are shown). The numbers below the LXRβ panels represent LXR/actin normalized by designating the expression from the vehicle control condition as 100%. Data in the bar graph are the mean ± S.D. (error bars) of three independent experiments. Asterisks indicate p < 0.05 compared with vehicle control. 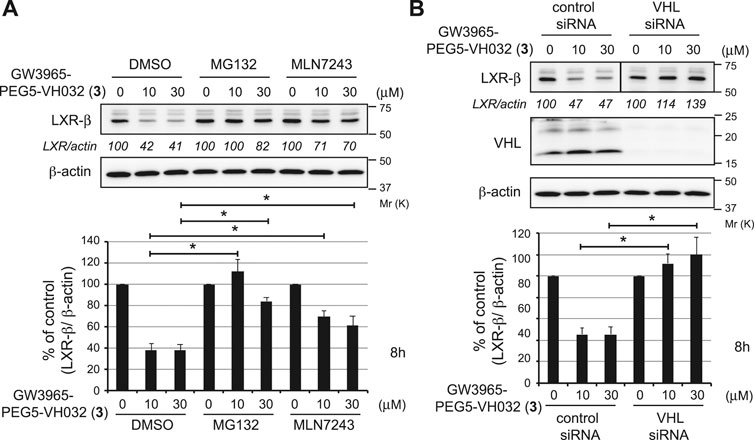 Herein, we report the synthesis of a PROTAC for LXR degradation as an effective inhibitory molecule. In the molecular design, the linking position of chimeric compounds was determined based on the structural information from X-ray crystallography of LXRα and its agonist GW3965. For the E3 ligase ligand in the PROTAC, VH032 and pomalidomide were introduced into chimeric compounds. The LXRβ degradation activity of the synthesized PROTACs was evaluated by western blot using HuH-7 human hepatoma cells, and it was found that the activity of VH032-based PROTACs (GW3965-PEG-VH032) was more potent than that of pomalidomide-based PROTACs (GW3965-PEG-POM) between the PEG3-PEG5 linkers. To investigate the effect of the linker length on the degradation activity, a series of VH032-type PROTACs with PEG3–PEG6 were examined, which revealed that the PROTAC with PEG5 (GW3965-PEG5-VH032, 3) exhibits the most potent activity for LXRβ degradation among them. Compound 3 was confirmed to bind to LXRβ, inducing its degradation. LXRβ degradation by this molecule occurs via the ubiquitin-proteasome system mediated by VHL E3 ligase. The degraders developed in this study have potential as novel therapeutic agents for LXR-related diseases. Therefore, our results suggest that agonist-based PROTACs could be a new approach to create PROTACs, even in the absence of an appropriate antagonist as a binding ligand for the POI.

MN is a project professor supported by Eisai and a scientific advisor of Ubience.

The Supplementary Material for this article can be found online at: https://www.frontiersin.org/articles/10.3389/fchem.2021.674967/full#supplementary-material

Copyright © 2021 Xu, Ohoka, Yokoo, Nemoto, Ohtsuki, Matsufuji, Naito, Inoue, Tsuji and Demizu. This is an open-access article distributed under the terms of the Creative Commons Attribution License (CC BY). The use, distribution or reproduction in other forums is permitted, provided the original author(s) and the copyright owner(s) are credited and that the original publication in this journal is cited, in accordance with accepted academic practice. No use, distribution or reproduction is permitted which does not comply with these terms.

†These authors contributed equally to this work

Application of PROTACs as a Novel Strategy for Drug Discovery