Bulky conjugated molecules with high stability are the prerequisite for the overall improvement of performance in wide-bandgap semiconductors. Herein, a chiral difluorenol, 2,2′-(9,9′-spirobi[fluorene]-2,2′-diyl)bis(9-(4-(octyloxy)phenyl)-9H-fluoren-9-ol) (DOHSBF), is set as a desirable model to reveal the stereoisomeric effects of wide-bandgap molecules toward controlling photophysical behavior and improving thermal and optical stability. Three diastereomers are obtained and elucidated by NMR spectra. Interestingly, the effect of modifying the stereo-centers is not observed on optical properties in solutions, pristine films, or post-treated film states. All three diastereomers as well as the mixture exhibit excellent spectral stability without undesirable green emission. Therefore, this stereoisomer-independent blue-emitting difluorenol will be a promising candidate for next-generation wide-bandgap semiconductors that would have extensive application in organic photonics.

The DOHSBF unit (without alkyl chains) consists of two tertiary alcohols and one spirobifluorene, which form the composition of C79H72O4. Theoretically, DOHSBF has six stable stereoisomers due to the three chiral sp3 carbon atoms and the orientation of benzene rings in the molecule, which are DOHSBF1 (aRSS, C2 symmetry), DOHSBF2 (aSSS, C2 symmetry), DOHSBF3 (aRRS, Asymmetry), DOHSBF4 (aSRS, Asymmetry), DOHSBF5 (aRRR, C2 symmetry), and DOHSBF6 (aSRR, C2 symmetry) (Figure 1A and Supplementary Figure S1), making it an excellent candidate to investigate the stereoisomeric effect of the fluorenol system. These six isomers can be distinguished by different chirality of spirobifluorene and the orientation of benzenes. They can be divided into two pairs of racemes and two mesomers. Among these six stable stereoisomers obtained from the structural optimization via quantum calculation, DOHSBF1, DOHSBF2, DOHSBF5, and DOHSBF6 seem to show centrosymmetric backbones (C2 symmetry), which is beneficial to define the actual structures among the isomers. In addition, the optimization results of DOHSBF (Figure 1B) show that the energies of DOHSBF1 (aRSS) and DOHSBF6 (aSRR) structures are the lowest among the six diastereomers. Taking the energy of the aRSS structure (0 kcal/moL) as a reference, the energy of the other four diastereomers is 0.40 kcal/moL (DOHSBF2, aSSS), 0.48 kcal/moL (DOHSBF3, aRRS), 0.44 kcal/moL (DOHSBF4, aSRS), and 0.48 kcal/moL (DOHSBF5, aRRR). FIGURE 1. (A) Theoretical configurations of DOHSBF. (B) Energy calculation comparison of possible theoretical stereoisomers of DOHSBF (alkyl chains are omitted) by Gaussian 09 at the B3LYP/6-31G(d) level.

Three pairs of DOHSBF diastereoisomers were synthesized via the Suzuki–Miyaura coupling reaction from 2,2′-spirobifluorene (with mixed aS- and aR-axis-chirality) and can be isolated via thin-layer chromatography (Figure 2A). The isomeric features are examined through matrix-assisted laser desorption/ionization time of flight mass spectroscopy (MALDI-ToF-MS). In Figure 2B and Supplementary Figure S2, the mixed DOHSBF samples only exhibit the molecular weight of 1,084.68 m/z, which is almost identical to isomers 1, 2, and 3 with the molecular weight of 1,084.68, 1,084.55, and 1,084.78, respectively. These results are consistent with the mass simulation of the molecular formula C79H72O4 (1,084.56). Furthermore, these isomers properties are reconfirmed by the same number of hydrogen atoms at the aromatic groups, according to the 1H NMR spectra (Figure 2C and Supplementary Figures S3–6) that exhibits the approximately equivalent integration at 7.95–7.85 ppm (4H, assigning to the S4 and the S5-position at SBF moiety), 7.70–7.55 ppm (6H), 7.50–7.20 ppm (16H), 7.15–7.05 ppm (2H, at the S2-position), 7.05–6.95 ppm (2H, at the S8-position), and 6.85–6.70 ppm (at the a-site on fluorenol and the S1-position on the SBF group). Even so, there are some subtle differences in chemical shift of hydrogen signals, probably derived from the integrated tactic effects of SBF-based axis chirality (Hamada et al., 2020) and asymmetric fluorenol chirality (Yuan et al., 2018; Yu et al., 2019; Wei et al., 2019). At 7.00 ppm, isomers 1 and 3 possess the singlet peak of S8 at 6.98 and 6.96 ppm, respectively, while isomer 2 exhibits the splitting multiple S8 peaks in this region. The splitting signals are also observed in 3.95–3.80 ppm (assigning to alkoxyl chains pendant on fluorenol groups) and 7.15–7.05 ppm for isomer 2, which suggests that the asymmetric backbones is consistent with the meso-DOHSBF type (DOHSBF3 and DOHSBF4, in Figure 1A). The symmetric structures without splitting in isomer 1 are assigned to rac-DOHSBF types, as is agreement with the simulated C2-symmetric results (Figure 1B). These results are consistent with SFX-based difluorenol building blocks where the meso-configuration exhibits the asymmetrically splitting feature on proton resonance (Yuan et al., 2018; Yu et al., 2019). Meanwhile, it is suggested that SBF-based axis chirality does not additionally break the symmetry of steric structures, as is in agreement with the tactic effects of other axis-chiral groups such as chiral binol-phosphate esters (Xiang et al., 2020) and 9,9′-spirobifluoren-derivates (Haas and Prelog, 1969). 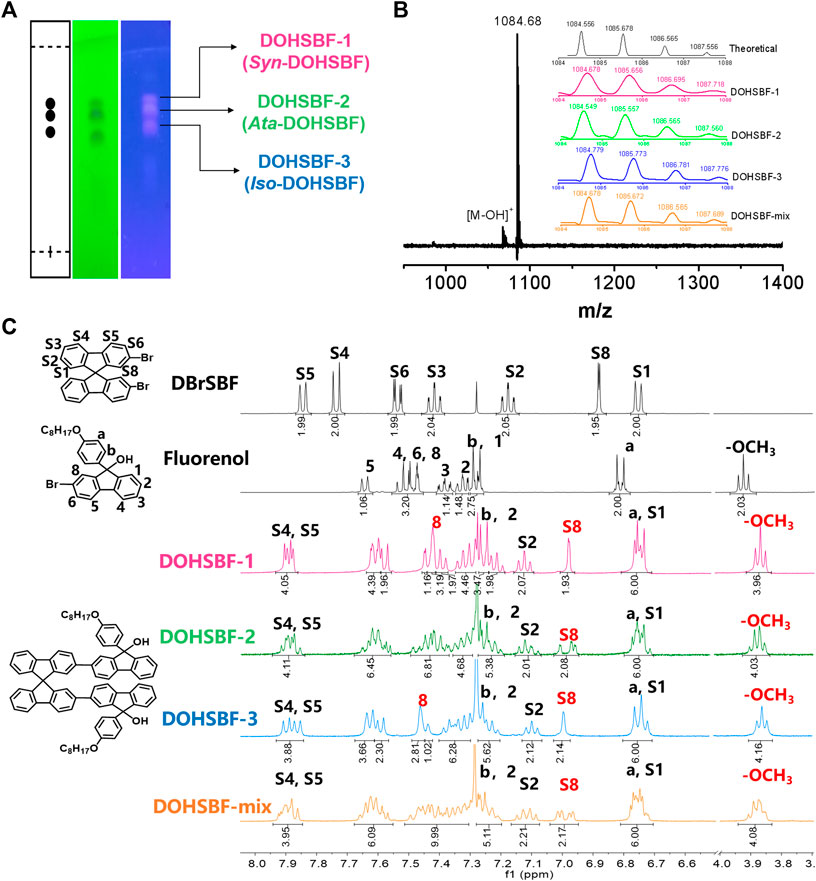 FIGURE 2. (A) TLC plate images of the DOHSBF reaction mixture under the 254 nm lamp (left) and the 365 nm lamp (right) (the mobile phase is PE: DCM (1:3) and the TLC plate has been placed into jar twice). (B) MALDI-ToF-MS spectra of DOHSBF. (C)1H NMR of DBrSBF, fluorenol, and DOHSBF in the aromatic region.

As depicted in Figure 3A and Supplementary Figure S7, all three stereoisomers show good solubility in organic solvents, such as dichloromethane, tetrahydrofuran, chloroform, and ethyl acetate, and exhibit a deep blue color. But the solubility of DOHSBF-1 is better than DOHSBF-2 in dichloromethane, and then DOHSBF-3. The X-ray powder diffraction (XRD) patterns in Supplementary Figure S8 show no apparent diffraction peaks, indicating that when pure, all the isomers formed amorphous films. The thermal stability is confirmed using the thermogravimetry analysis (TGA) and differential scanning calorimetry (DSC) measurements. Decomposition temperatures (5% weight loss, termed Td) recorded in order are mixture (315°C) > isomer-3 (278°C) > isomer-1 (276°C) > isomer-2 (261°C) (Figure 3B and Supplementary Figure S9). These high Td values suggested good thermal stability of DOHSBF for its application in optoelectronic devices, and the mixture of difluorenol possesses the enhanced stability during the evaporation process. The DSC curves indicate that three pure difluorenol derivatives show no glass phase transition and melting point by heating to 178°C, but the mixture presents an inconspicuous glassy transition temperatures (Tg) at 114°C (Supplementary Figure S10). The cyclic voltammetry (CV) measurement was carried out to investigate the electrochemical oxidation and reduction behaviors of DOHSBF and estimated the corresponding HOMO and LUMO energy levels. The CV curves of DOHSBF with different forms are showed in Figure 3C, with the electrochemical properties of DOHSBF listed in Supplementary Table S1. The oxidation onset potential is recorded at 1.49, 1.54, 1.50, and 1.48 V for DOHSBF-mix, DOHSBF-1, DOHSBF-1, and DOHSBF-3 vs. Ag/Ag+, respectively. As a result, according to the empirical formula EHOMO = −(Eox−EFc)−4.8 eV, the corresponding highest occupied molecular orbital (HOMO) energy levels of the four compounds were −6.26, −6.31, −6.27, and −6.25 eV, respectively, and the lowest unoccupied molecular orbital (LUMO) energy levels were measured to be −2.75, −2.70, −2.63, and −2.67 eV, respectively. As a result, the electrochemical band gaps were calculated to be 3.51, 3.61, 3.64, 3.58 eV, respectively. The energy levels revealed that configuration diversity induced by the chiral structure in fluorenol-based materials in the solution state seems to show slight effects on the electronic structure. The electrochemical results demonstrated that all the DOHSBF molecules show a wide-bandgap characteristic.

FIGURE 3. (A) The solubility of DOHSBF in dichloromethane. (B) TGA curves and (C) cyclic voltammogram of DOHSBF.

The absorption and emission spectra of DOHSBF in solutions, pristine films, and post-treated film states were investigated to further disclose the diastereomeric effects on optical properties (Figure 4; Table 1). Dilute solutions of tetrahydrofuran at a concentration of 10−5 mg/ml were used to investigate the photophysical properties of the four different chiral forms. As depicted in Figure 4, all the isomers show similar maximum absorption peaks at 333 nm in the solution state and 338 nm in the film state due to similar conjugated backbone structures. As depicted in Figure 4A, the PL spectrum of DOHSBF-mix in diluted solution was composed of three well-resolved emission peaks at around 371, 390, and 410 nm, attributable to the 0–0, 0–1, and 0–2 vibrational transitions of single molecule, respectively, having similar solution spectra in the other three isomers. The emission profiles of DOHSBF in spin-coated pristine films are shown in Figure 4B. Similarly, the emission spectra of them in the film state present three emission bands at about 423, 443, and 471 nm, and the corresponding 0–1 transition in the film are bathochromic to 443 nm, compared to the solution states. In addition, thermal annealing at high temperature in air was further conducted to study the spectral stability for the isomer films. It can be seen from the Figure 4C and the Supplementary Figure S11 that there is almost no change in the UV-vis spectra of DOHSBF films after annealing in air for 10 min. With regard to fluorescence emission spectra, there is no difference after annealing, illustrating that the DOHSBF has relatively good thermal stability. Compared to the conventional thermal stability, the oxidation stability of luminescent films has been rarely addressed in the last several decades, which is the most important factor determining practical optoelectronic application in the future. Herein, we make a further research study on the influence of chiral forms by photooxidation of pristine spin-coated films. Experimental procedure for photooxidation measurement involves exposing the pristine films under an ultraviolet lamp (365 nm) irradiation for 30 min. As presented in Figure 4D, no obvious change of absorption and emission behaviors was found in all four samples, and the green emission band with the Igreen/Iblue ratio (the ratio of emission intensities at 550 and 443 nm) is very low, indicating its excellent deep blue emission spectral stability without undesirable green emission. Unlike previously reported difluorenol molecule, 9,9′-diphenyl-9H,9′H-[2,2′-bifluorene]-9,9′-diol (DPFOH), it was observed that all PL spectra of the isomers, either the solutions or the films, changed conspicuously with the appearance of an additional shoulder of green-band emission under thermal annealing and UV irradiation oxidation (Liu Y. et al., 2020). Compared to DOHSBF, another difluorenol bulky molecule with the similar structure, 2O8-DPFOH-SFX, its raceme and mesomer display the distinct conformations and optoelectronic properties in their condensed states. The annealed meso-2O8-DPFOH-SFX film has a stronger green emission band at 510 nm with an Igreen/Iblue ratio of 0.5, but no obvious change in the green band was observed for the annealed rac-2O8-DPFOH-SFX film (Igreen/Iblue = 0.143), indicating stereoisomerism sensitive PL property (Yu et al., 2019). In this regard, only the DOHSBF molecules, either isomers or the mixture, show stereoisomer-insensitive deep blue emission with enhanced stability. Therefore, in spite of the diverse diastereomers, a similar conjugated backbone plays a more key role in dominating optical properties in accordance with the identical absorption and emission spectra of stereoisomers in solution and film states. 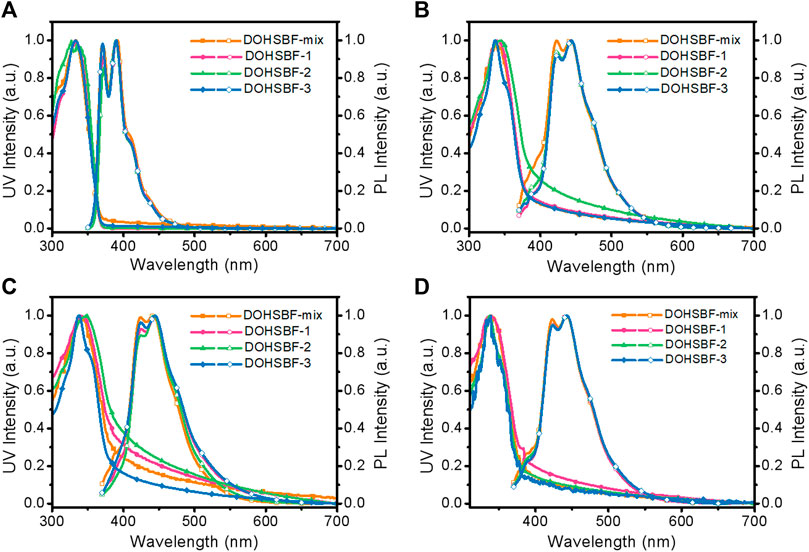 TABLE 1. Photophysical properties of the isomers at various states.

In summary, we demonstrated the stereoisomeric effects of DOHSBF on the photophysical behavior. Impressively, the stereoisomeric effect on optical properties in solutions, spin-coated films, and post-treated film states is negligible. As compared to the difluorenols reported in previous literature, we found that DOHSBF in each form exhibit excellent blue spectral stability without undesirable green emission. Spatial isomerism in organic molecule of stereoisomers can not only precisely uncover the structure–function relationship but also play a key role in opening up new design strategies for organic functional materials.

The original contributions presented in the study are included in the article/Supplementary Material; further inquiries can be directed to the corresponding authors.

The Supplementary Material for this article can be found online at: https://www.frontiersin.org/articles/10.3389/fchem.2021.717892/full#supplementary-material

Copyright © 2021 Yu, Jia, Lin, Du, Jin, Wei, Xie and Huang. This is an open-access article distributed under the terms of the Creative Commons Attribution License (CC BY). The use, distribution or reproduction in other forums is permitted, provided the original author(s) and the copyright owner(s) are credited and that the original publication in this journal is cited, in accordance with accepted academic practice. No use, distribution or reproduction is permitted which does not comply with these terms.