Protein hydration is crucial for the stability and molecular recognition of a protein. Water molecules form a hydration water network on a protein surface via hydrogen bonds. This study examined the hydration structure and hydrogen bonding state of a protein, staphylococcal nuclease, at various hydration levels in its crystalline state by all-atom molecular dynamics (MD) simulation. Hydrophilic residues were more hydrated than hydrophobic residues. As the water content increases, both types of residues were uniformly more hydrated. The number of hydrogen bonds per single water asymptotically approaches 4, the same as bulk water. The distances and angles of hydrogen bonds in hydration water in the protein crystal were almost the same as those in the tetrahedral structure of bulk water regardless of the hydration level. The hydrogen bond structure of hydration water observed by MD simulations of the protein crystalline state was compared to the Hydrogen and Hydration Database for Biomolecule from experimental protein crystals.

In an aqueous environment, there is hydration water on a protein surface (Nakasako et al., 2004; Niimura et al., 2006; Gnesi et al., 2017). Hydration water plays an important role in the structural dynamics, stability, and functional expression of a protein (Rupley et al., 1983; Careri et al., 1998). Hydration water not only forms hydrogen bonds with amino acid residues in proteins but also between water molecules in the hydration layers. As a result, a hydration water network is formed on the protein surface (Nakasako et al., 2004). The protein hydration structure has been studied by crystallography. Many hydration water molecules are observed at cryogenic temperatures by X-ray crystallography (Nakasako et al., 1999). Hydration structures are efficiently observed at room temperature by neutron crystallography (Niimura et al., 2006). The structure and dynamics of hydration water are examined in protein crystals (Podjarny et al., 1997). Based on crystal structures, including hydrogen atoms in the Protein Data Bank (PDB), the Hydrogen and Hydration Database for Biomolecules (HHDB © National Institutes for Quantum and Radiological Science and Technology (QST) licensed under CC BY-SA4.0 International; doi: 10.18908/lsdba.nbdc00495-000.V002) has been constructed (Niimura et al., 2006). In this database, hydration structures and hydrogen bonding states observed in the crystal structure analysis of biological macromolecules are summarized.

In this study, MD simulations of staphylococcal nuclease (SNase) in the crystalline state were performed at various hydration levels. The hydration level-dependent hydration structure and hydrogen bonding states were analyzed. As the water content increased, amino acid residues on a protein surface were uniformly more hydrated, and the number of hydrogen bonds per single water asymptotically approached 4, the same as bulk water. The distances and angles of hydrogen bonds in hydration water in the protein crystal were almost identical to those in the tetrahedral structure of bulk water regardless of water content. The hydrogen bond structure of hydration water observed by MD simulations of the protein crystalline state was compared to the HHDB from the experimental protein crystal.

MD Simulation of Protein Crystal and Analysis of the Trajectories

The crystal structure of SNase (PDB code: 1EY0) was used as the initial simulation structure. The simulated system was constructed to reproduce the crystal unit cell, having a space group symmetry of P41 (Figures 1A,B). Missing residues 1 to 5 and 142 to 149 in 1EY0 were modeled based on the nuclear magnetic resonance structures (PDB code: 1JOR). The system contained four protein molecules, including crystal water registered in 1EY0. In addition, water molecules were added randomly distributed in the empty space in each system (Figures 1C,D) to construct the protein crystal with different hydration levels (h) from 0.10 to 0.55 (g water/g protein). The number of water molecules and atoms in the simulation system are summarized in Supplementary Table S1. To neutralize the system, 32 chloride ions were randomly placed in the system. Apart from MD simulations of crystalline proteins, MD simulations of bulk water were also performed. For the simulation of bulk water, 440 water molecules were set in a rectangular box. The periodic boundary condition was imposed, and the particle mesh Ewald method was used with a cutoff of 10 Å. The AMBER ff14SB force field and the TIP3P water model were employed. After energy minimization (2000 steps), 2 ns MDs were performed to equilibrate the systems at 300 K and 1 atm, which were maintained following the Berendsen method (relaxation time of 1 ps for both) using the program AMBER (Case et al., 2015). For equilibration MD, the ensemble is NPT. Successive 4 ns trajectories in the NPT ensemble were obtained for the analyses. For hydrogen bond analysis, pairs of water molecules were selected as hydrogen-bonded only if their interoxygen distance was <3.5 Å and simultaneously the O–H…O angle was > from 120° to 180°. To check the reproducibility of the simulation results, several simulations from different initial atomic velocities from a Boltzmann distribution were performed. The analytical results did not depend on the trajectories of different times and initial states. The thermal equilibration of the simulation was checked through total energy in the system and the temperature. Supplementary Figure S1 shows the lattice constants and simulation boxes as a function of the hydration level. As the hydration level increases, these parameters increase to keep a constant pressure in the system. As for the distance between proteins in an unit cell, the contact maps between proteins were calculated (Joti et al., 2008). At low water content, there is more protein-protein contact, and at high water content, hydration water enters the gaps between the proteins, resulting in less protein-protein contact. 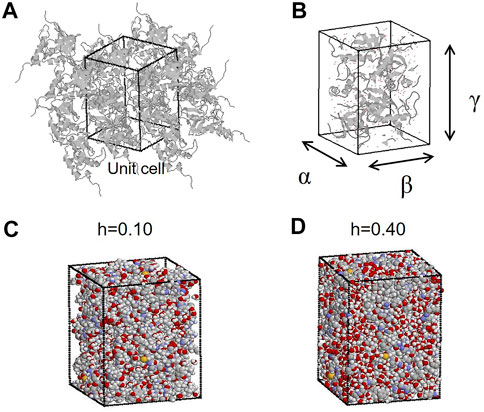 Hydration Structure and Distribution of Water Molecules on the Protein Surface 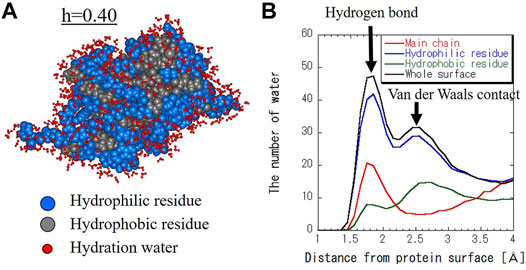 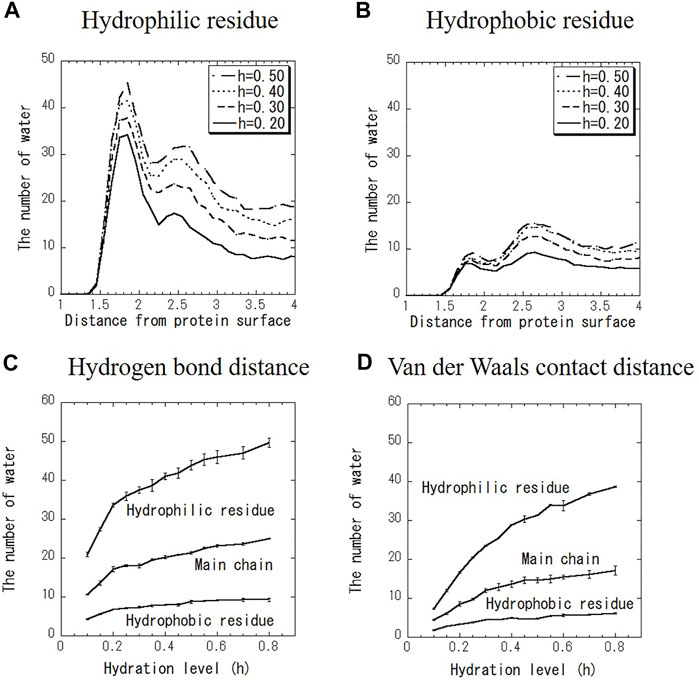 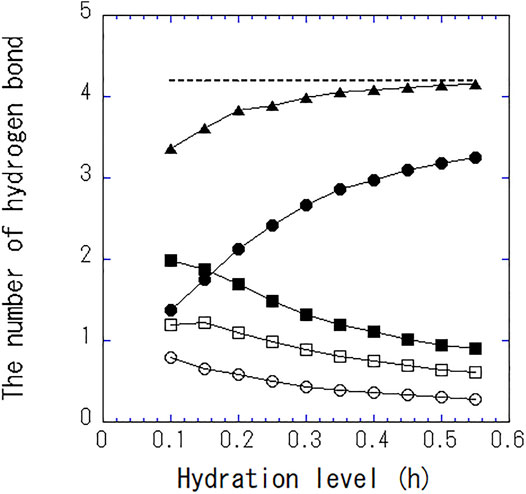 Geometry of the Hydrogen Bond in Hydration Water 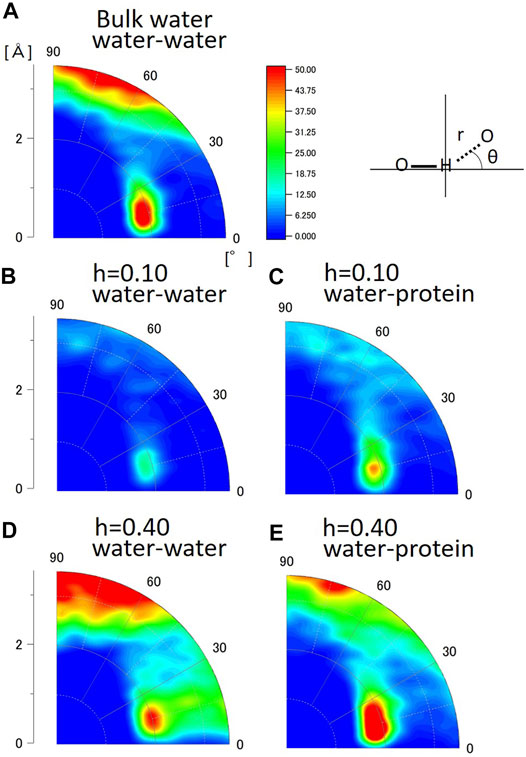 Hydrogen and Hydration in Biomolecules

The HHDB is a database of hydrogen atom positions in biological macromolecules, such as protein and DNA, and hydration water molecules, based on the selected PDB data (neutron crystallography and high-resolution X-ray crystallography). Figure 6 shows the geometrical distribution of O-H…O between water and water and between water and protein from the HHDB. Neutron data above 2.0 Å resolution are used for the analysis. In Figure 6A, the two peaks are observed in the geometrical distribution of O-H…O between water and water at the distance of around 2.0 Å and the angle of around 30° and 55°. The distance is equal to the distance obtained by MD simulation (Figures 5A,B,D). The angle of the peak position around 30° should correspond to that around 15° in the hydrated crystalline protein by MD simulations. Although the reason for the difference is unclear, it could be ascribed to the hydrogen bond in the tetrahedral geometry. The second peak around 55° is not observed in the hydrated crystalline protein (Figures 5B,D) or bulk water (Figure 5A) in the MD simulation. A typical case of the relative geometry of two water molecules observed at r = 2.5 Å and θ = 55° is shown in Supplementary Figure S6; (Tamada et al., 2009). In this geometry, a hydrogen bond can be formed. This arrangement may indicate some kind of hydration water cluster, although they do not necessarily form a tetrahedral structure. The water molecules registered in the HHDB may be water molecules that form hydrogen bonds in some cases; in other cases, water may be registered against the observed electron density or nuclear density regardless of hydrogen bond formation. This difference may lead to the discrepancy between HDDB and MD calculations. In the geometrical distribution of O-H…O between water and protein, as shown in Figure 6B, the peak in the distribution is located at r = 2.0 Å and θ = 15°. This is in good agreement with that in the hydrated protein crystalline state in MD simulation (Figures 5C,E). The geometrical relationship between water and protein in the HHDB is thought to maintain the tetrahedron of water molecules, consistent with low-temperature crystal structure analysis.

FIGURE 6. Geometrical distribution of O-H…O calculated from HHDB (A) between water and water and (B) water and protein from the HHDB. Neutron data above 2.0 Å resolution are used for the analysis.

HN designed the research and performed the MD simulation and analysis. TT analyzed the HHDB. HN and TT discussed the data together. HN wrote the first manuscript. HN and TT improved the manuscript together.

The Supplementary Material for this article can be found online at: https://www.frontiersin.org/articles/10.3389/fchem.2021.738077/full#supplementary-material

Copyright © 2021 Nakagawa and Tamada. This is an open-access article distributed under the terms of the Creative Commons Attribution License (CC BY). The use, distribution or reproduction in other forums is permitted, provided the original author(s) and the copyright owner(s) are credited and that the original publication in this journal is cited, in accordance with accepted academic practice. No use, distribution or reproduction is permitted which does not comply with these terms.