Two New Diterpenoids from Biscogniauxia sp. and Their Activities

Two new diterpenoids, including a seco-isopimarane type (1) and an abietane type (2), were isolated from Biscogniauxia sp. (71-10-1-1). Their structures, including absolute configurations, were elucidated by NMR spectroscopic analyses, X-ray crystallography, 13C chemical shifts calculations, and ECD calculations. This is the first report of diterpenoids from Biscogniauxia sp. Furthermore, short-term memory enhancement against Alzheimer’s disease (AD), anti-inflammatory, and cytotoxic activities of 1–2 were also evaluated. The results showed that compound 1 exhibited short-term memory enhancement activity against AD.

In our previous chemical investigation of a fungal strain of Biscogniauxia sp. (No.71-10-1-1), structurally diverse active meroterpenoids (diisoprenyl-cyclohexene/ane-type) and their dimers with new skeleton were identified (Zhao et al., 2017; Zhao et al., 2019; Zhao et al., 2021), which showed that this strain can produce natural products with rich chemical diversity. Further chemical investigation on this fungal strain was carried out, which led to the isolation of two new diterpenoids, including a seco-isopimarane type (1) and an abietane type (2). Their structures, including absolute configurations, were elucidated by NMR spectroscopic analyses, X-ray crystallography, 13C chemical shifts calculations, and ECD calculations. Details of the structure elucidations for 1–2 are reported herein (Figure 1). In addition, short-term memory enhancement against AD, anti-inflammatory, and cytotoxic activities of 1–2 were also evaluated. The results showed that 1 exhibited short-term memory enhancement activity. FIGURE 2. Key 1H-1H COSY and HMBC correlations and the planar structures of 1–2. 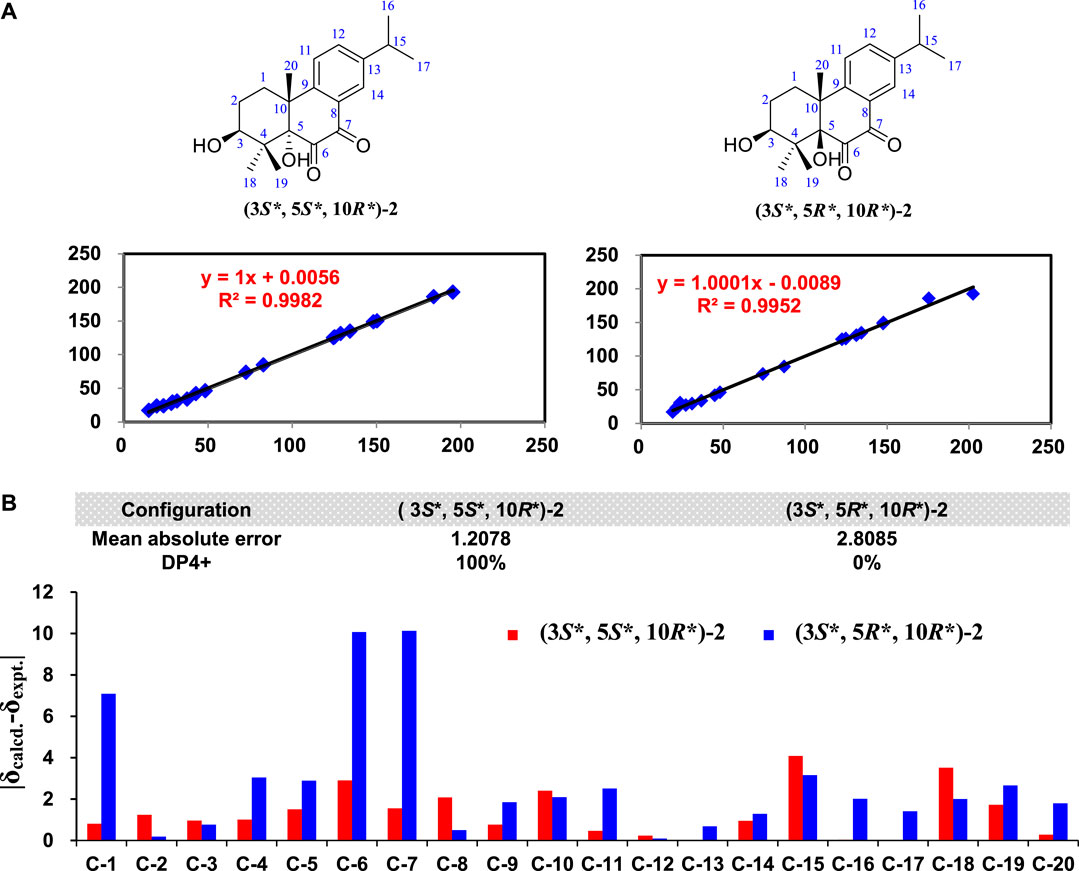 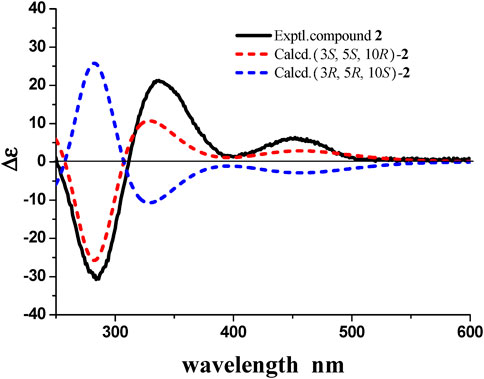 In our work, a seco-isopimarane (1) and an abietane type (2) diterpenoids were obtained from Biscogniauxia sp. (No.71-10-1-1). This is the first report about diterpenoids from Biscogniauxia sp., which has enriched the structural diversity of this genus secondary metabolites. Furthermore, the bioassays (including short-term memory enhancement against AD, anti-inflammatory, and cytotoxic activities) of 1–2 have been carried out. The anti-Alzheimer’s disease (AD) activities of 1–2 were evaluated by AD fly model with memantine as the positive control. The result showed 1 exhibited short-term memory enhancement activity in AD flies (Figure 6). In addition, the anti-inflammatory assays of 1–2 were evaluated in LPS-stimulated RAW264.7 macrophages with hydrocortisone as the positive control. The results showed that compounds 1–2 showed cytotoxic effect on RAW264.7 cells. Therefore, their anti-inflammatory activities have not been tested. Furthermore, the cytotoxic activities of 1–2 against SW-480, MCF-7, HepG2, HeLa, and PANC-1 human cancer cell lines were evaluated by cell count kit 8 assay (CCK-8), using cisplatin as the positive control. However, none of them exhibited significant activity (IC50 > 40 μM). 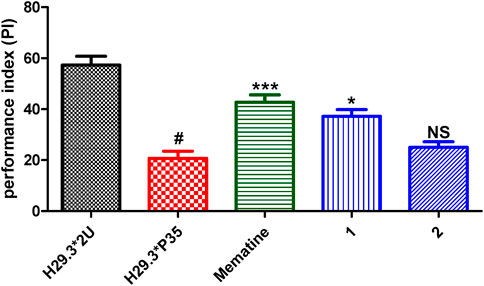 The strain numbered as 71-10-1-1 was isolated from the lichen Usnea mutabilis Stirt. collected from Zixi Mountain, Yunnan province, People’s Republic of China, in November, 2006. The strain was identified as Biscogniauxia sp. on the basis of the gene sequence analysis. The ribosomal internal transcribed spacer (ITS) and the 5.8S rRNA gene sequences (ITS1-5.8S-ITS2) of the strain have been deposited at GenBank as KX977400.

The fungal strain was cultured on slants of potato dextrose agar (PDA) at 25°C for 5 days. Agar plugs were used to inoculate nine Erlenmeyer flasks (250 ml), each containing 100 ml of potato dextrose broth (PDB). Fermentation was carried out in 60 Erlenmeyer flasks (500 ml), each containing 70 g of rice. Distilled H2O (105 ml) was added to each flask, and the rice was soaked overnight before autoclaving at 120°C for 30 min. After cooling to room temperature, each flask was inoculated with 5.0 ml of the spore inoculum and incubated at room temperature for 50 days.

Fly Stock. w1118 (isoCJ1) is an isogenic line used as a control in all of the experiments. In the experiment, we named this stock “2U” for convenience. Expression of Aβ42 (UAS-Aβ42; referred to as H29.3) was driven by a widespread neuronal-expressing Gal4 line, elav-GAL4c155 (P35). A behavioral assay was made from the first generation of the cross between H29.3*P35 (AD flies).

Pavlovian Olfactory Learning. Briefly, in the training period, a group of 100 flies was put into a training tube decorated with copper grids. These flies would be orderly exposed to two odors (octanol or methyl cyclohexanol) for 1 min, who were subsequently surrounded by fresh air for 45 s. These flies would be subjected to electric shock for 1 min when they smell the first odor. In the test period, these trained flies would be immediately transported to the choice point, where the T-maze diverged into two containers containing two odors. The flies were allowed to choose one odor between the two for 2 min. Then the number of flies in two containers would be counted. The parameter of PI (performance index) was used for evaluating flies’ memory behavior. PI = 0 represents these flies cannot memorize the link between electric shock and odors. On the contrary, PI = 100% represents all the flies can avoid electric shock according to odors. Note: The experiment was carried out in a room with 25°C, 70% RH.

Statistical Analysis. Data were analyzed and graphs were also plotted (Figure 6) with the program Graph Pad 5.03.

Cell viability assay. The cytotoxic effect of compounds 1–2 on RAW264.7 cells was evaluated by MTT assay. RAW264.7 cells were dispensed in 96-well plate at a density of 1 × 105 cell per well incubated at 37°C for 24 h incubation, cells were treated with the tested agents for the indicated periods of time. Then, 20 µl aliquot of 0.5% MTT (Sigma, MA, United States) solution was added to each well followed by 4 h incubation. The culture medium was removed, and the formazan precipitates were dissolved with 150 µl of DMSO. The optical densities (OD) at 570 nm were measured with a ELISA reader (Thermo Fisher Scientific, Franklin, MA, United States). Compounds 1–2 showed no cytotoxic effect on RAW264.7 cells at different concentrations (5, 10, 20, 40, 80 µM).

Five human cancer cell lines (SW-480, MCF-7, HepG2, HeLa, and PANC-1) were used in the cytotoxicity assays. All the cells were cultured in DMEM medium (Gibco, Life technologies, United States), supplemented with 10% fetal bovine serum (Gibco, Life technologies, United States), in 5% CO2 at 37 °C. The cytotoxicity assay was performed using the CCK-8 (Dojindo Laboratories, Kumamoto, Japan) assay according to the manufacturer’s protocol. Briefly, 1 × 104 cells were seeded into each well of the 96 well plate and treated with different concentrations (2.5–40 μM) of the compounds with cisplatin (Sigma, MA, United States) as the positive control for 48 h. Then, CCK-8 solution (10 μl) was added to each well and incubated for 2 h at 37°C. The absorbance of the samples at 450 nm was measured using a microtiter plate reader (TriStar LB941, Berthold technologies, Germany). The 50% inhibitory concentration (IC50) of each compound was calculated using a weighted regression of the plot.

The Supplementary Material for this article can be found online at: https://www.frontiersin.org/articles/10.3389/fchem.2021.749272/full#supplementary-material

Copyright © 2021 Zhao, Liu, Zhang, Chen, Hu, Guo, Zhao, Zhi and Gao. This is an open-access article distributed under the terms of the Creative Commons Attribution License (CC BY). The use, distribution or reproduction in other forums is permitted, provided the original author(s) and the copyright owner(s) are credited and that the original publication in this journal is cited, in accordance with accepted academic practice. No use, distribution or reproduction is permitted which does not comply with these terms.