With increasing cost of electricity obtained from conventional sources and effect of global warming it is necessary to shift to renewable energy sources to meet global energy demand. Photovoltaic is one of the most promising of all the renewable technologies. Copper indium diselenide (CIS), and Cu(In1-xGax)Se2 (CIGS), have emerged as promising polycrystalline thin-film semiconductors for solar cell absorber layers. These direct band gap semiconductors have band gap in the range 1.0–1.26 eV. CIGS absorber based hetero-junction solar cell has the large potential for cost reduction with respect to power generation efficiency and recently the efficiencies of a CIGS solar cell exceed 22% (Green et al., 2017) so that the commercial production of CIGS films is growing rapidly. The kesterite quaternary compound, pure sulfide Cu2ZnSnS4 (CZTS) and sulfo-selenide Cu2ZnSnSxSe4-x (CZTSSe) has been also studied by several groups over the past years (Katagiri et al., 2009; Todorov et al., 2010; Jiang et al., 2014) as a non-toxic, cheaper, naturally abundant, suitable band gap energy of 1.4–1.5 eV and high absorption coefficient over 104 cm−1, alternative to other chalcogenides compounds such as CdTe and CIGS. Recently, efficiencies of pure sulfide CZTS and mixed sulfo-selenide CZTSSe based solar cells reached above 9 and 12%, respectively (Green et al., 2017). Several candidate materials like Mo (Abou-Elfotouh et al., 1990; Ashour et al., 1993; Scofield et al., 1995), Pt (AbouElfotouh et al., 1989; Abou-Elfotouh et al., 1990; Ashour et al., 1993), Au (Matson et al., 1984; AbouElfotouh et al., 1989; Moons et al., 1993), Ag (Matson et al., 1984), Cu (Matson et al., 1984), and Ni (Niles et al., 1992; Moons et al., 1993) have been experimented with for ideal back contact material for thin-film solar cells. From them Mo is found to be the most appropriate back contact material because of its inertness, high conductivity, stability at the processing temperature, low contact resistance, etc. The surface of the CZTS absorber layer has excellent contact with the Mo back contact which is helpful for decreasing the minority carrier recombination and providing a current path for minority carriers to reach the n-type material is used in solar cell (Muhunthan et al., 2014). A poor contact between Mo and CZTS which is a cause of reducing the efficiency of solar cell. Sputtering method are widely used in industrial products because of (i) high purity films, (ii) ease of sputtering any metal, alloy or compound, (iii) high density films, (iv) extremely high adhesion and hardness, (v) high deposition rate, etc. (Takedaa et al., 2001), can be obtained at low substrate temperature. From an industrial point of view DC-magnetron sputtering is desirable for the large area uniform coating because it is a more simple technology than RF magnetron sputtering and it gives higher deposit rate. A DC-magnetron sputtering is an attractive process to form Mo thin films because it is easily scalable using commercially available deposition equipments. Therefore, it is necessary to find out the optimal sputtering conditions of Mo thin films to manufacture thin-film solar cells. It is well known that sputtering process parameters such as sputtering power, working gas pressure and target-to-substrate distance affects strongly on the properties of sputter-deposited Mo thin films. The structural, optical, electrical, and morphological properties changes drastically as a function of target-to-substrate distance such as crystal orientation, grain size, resistivity, optical reflection, roughness, and adhesion. For example, films deposited at lower working gas pressures generally have poor adherence to the substrate and higher conductivity, where as those deposited at higher gas pressures tend to have good adherence and high resistivity (Scofield et al., 1995). In present work, an attempt has been made to investigate the influence of target-to-substrate distance on properties of Mo thin films synthesized using DC-magnetron sputtering in view of its use in CZTS solar cells. We found that the structural, optical, morphology, and electrical properties of these films critically depends on target-to-substrate distance of DC-magnetron sputtering.

Molybdenum thin films were deposited by using commercial planar DC-magnetron sputtering unit (Model: 12" MSPT, Hind High Vacuum) with a 99.98% pure Mo target. Substrates were initially cleaned using soap and piranha solution and then by double distilled water using an ultrasonic bath for 30 min. They were subsequently introduced into the vacuum chamber and placed at different distances from the Mo target. The vacuum chamber was initially evacuated to a base pressure of 2 × 10−5 mbar using rotary and diffusion pump. Mo thin films were deposited on to 2 cm × 5 cm ultrasonically cleaned corning glass (#7059) substrate. Argon (Purity-99.99%) was used as a working gas to maintain pressure inside the vacuum chamber. Experiments were carried out by systematically changing the target-to-substrate distance from 30 to 90 mm with the step of 20 mm while keeping all other parameters constant. Other deposition parameters are listed in Table 1. 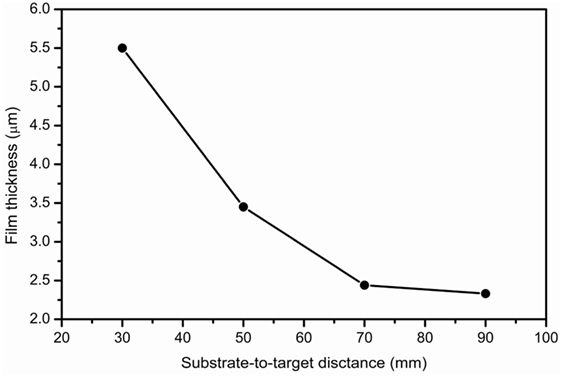 Figure 1. Variation of film thickness as a function of target-to-substrate distance for molybdenum thin films deposited by DC-magnetron sputtering. 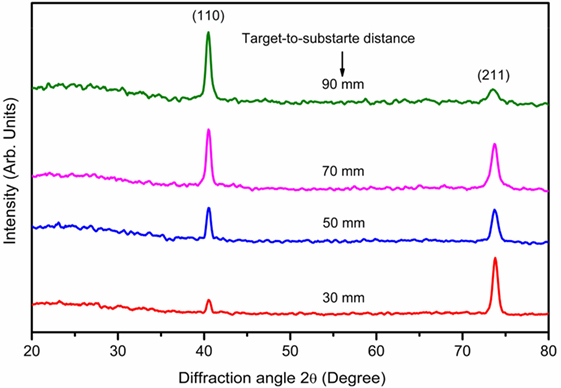 where λ is the wavelength of the X-ray used, β is full-width at half-maximum (FWHM), and θβ is the Bragg diffraction angle. The calculated structural parameters are presented in Table 2. As seen from Table 2, the average crystallite size of Mo films decreases with increasing target-to-substrate distance. 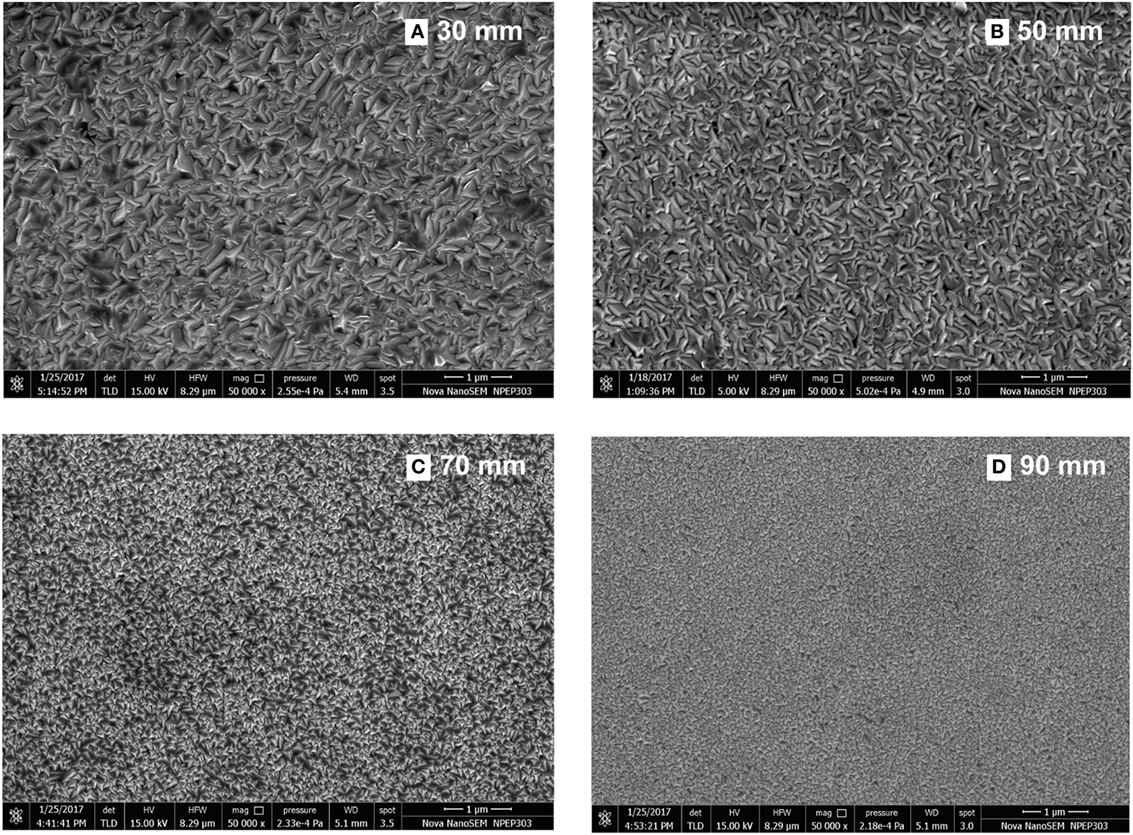 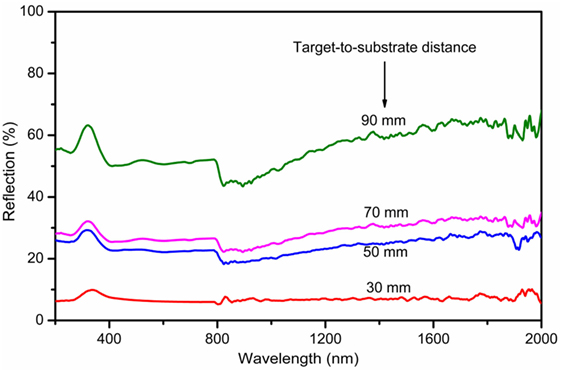 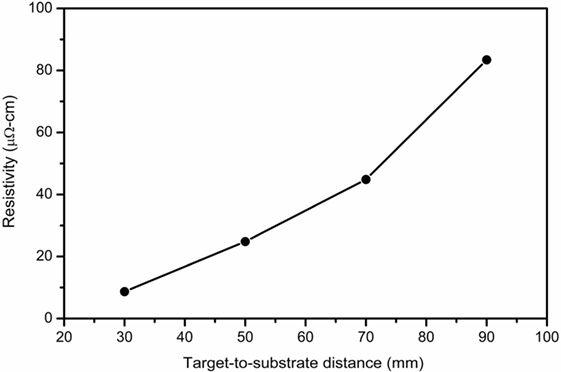 The adhesion of the films was investigated with scotch tape adhesion test by gluing the tape on the surface of Mo films and it by applying manual force. No delamination of Mo films from the substrate was observed suggesting that the as-deposited Mo films deposited on glass substrate have excellent adhesion property.

All authors contributed equally to this work.

Copyright: © 2018 Pandharkar, Rondiya, Rokade, Gabhale, Pathan and Jadkar. This is an open-access article distributed under the terms of the Creative Commons Attribution License (CC BY). The use, distribution or reproduction in other forums is permitted, provided the original author(s) and the copyright owner are credited and that the original publication in this journal is cited, in accordance with accepted academic practice. No use, distribution or reproduction is permitted which does not comply with these terms.