In this work, we propose mesoscopic model to investigate the surface micro structures of magnetorheological elastomers (MREs) under a magnetic field. By comparing the surface roughness changes of MREs, we found that the surface micro-deformation of MREs, not the field-induced hardness, mainly accounts for the controllable friction characteristics of MREs. The results also demonstrate that the field-induced friction of MREs depends on the particle contents as well as the initial surface roughness. The model predicts that the maximum relative roughness change of MREs occurs when the MRE has particle volume fraction of around 9%, which is validated by experimental results.

Polymers are hyperplastic materials that can be subjected to a large recoverable deformation under a relatively small loading. In taking advantage of this natural property, researchers have developed adaptive materials called magnetorheological elastomers (MREs), by embedding magnetic particles (micron size) in the polymer matrix (Jolly et al., 1996; Ginder et al., 1999). The magnetizing particles in the matrix would interact with each other under an external magnetic field, and consequently induce deformation and modulus changes of MREs. With these unique controllable properties, MREs could be possible candidates for a variety of applications, such as in soft actuators (Böse et al., 2012), vibration absorber (Menzel, 2015; Chen et al., 2016), and magnetic sensor (Sutrisno et al., 2015) etc.

Recently, several experimental studies (Lee et al., 2013; Lian et al., 2015, 2016; Li et al., 2018) have shown that the tribological properties of MREs also change with external magnetic fields, which would possibly extend the MRE's application in interfacial friction control. However, the mechanism of field-induced friction behavior of MREs is still unclear. Lee et al. (2013) employed a homemade linear sliding tester to evaluate the friction characteristics of MREs, and found that the friction coefficient of MRE decreased with the external magnetic field. Later, the same group (Lian et al., 2015, 2016) applied a reciprocating friction tester to characterize four MRE samples, which were prepared by embedded particles in different matrix materials, and found the same phenomenon for all test conditions. The authors argued that the friction reduction of MREs under a magnetic field was due to the field-stiffening effect. According to the classic contact theory, the large stiffness of materials will result in less interfacial friction (Popov, 2010). However, in a previous study (Li et al., 2018), we observed that even though the friction coefficient of MREs increases with external magnetic fields in some cases, the MREs are getting stiffer. Accordingly, this phenomenon challenges existing theoretical interpretation.

Although theoretical modeling of the deformation behavior of MREs has been studied by many others, these models originated from either the continuum mechanics (Dorfmann and Ogden, 2004; Kankanala and Triantafyllidis, 2004), or the multiscale theories (Davis, 1999; Cremer et al., 2015) mostly focus on prediction of the magnetic induced properties of MRE in macro conditions. The models from the point of view of continuum mechanics (Allahyarov et al., 2014; Menzel, 2014) hardly take into account the surface morphology of MREs. And almost all of the representative volume unit models (Yin et al., 2002; Ivaneyko et al., 2014) based on multiscale theories ignore the surface micro profile of MREs. Therefore, all the reported theoretical work on modeling of MREs can only predict the average bulk deformation of MREs. In order to fully understand the field-induced friction behavior of MREs, it is essential to develop a new model to analyze the surface micro structures of MRE under external magnetic fields.

To fully understand how the external magnetic field affects the surface roughness of MRE, and how the initial roughness and particle volume fractions impact on the variation of the roughness, a 2 dimension mesoscopic model is proposed in this paper. By employing the Monte-Carlo method (Tsang et al., 2004), our model could incorporate the initial surface irregularities of MRE. Based on this, the changes of MREs surface roughness in magnetic field are analyzed by utilizing magneto-mechanical coupling (FEM) algorithms. Besides, several MRE samples with different particle fractions and initial surface roughness are prepared and their roughness are measured by a white light interferometer to reveal the mechanism of magneto induced roughness changes.

In the proposed model, we assume that the radius of magnetic particle sizes follow normal distribution, and the particles are tightly bonded to the matrix. In addition, the effect of polymer networks on particle interaction is negligible in the theoretical simulation (Davis, 1999; Yin et al., 2002; Ivaneyko et al., 2014). Since the magnetic induced deformation of MRE is usually tiny (Zrínyi et al., 1996; Martin et al., 2006; Danas et al., 2012), both magnetic particles and polymer matrixes are considered as standard incompressible liner elastic materials. The Young's modulus of particles is 200Mpa, and the Young's modulus of matrixes is 1Mpa.

Figure 1A shows the statistic sizes of 175 particles which are uniformly distributed in matrix. Meanwhile, the 2D Gaussian random contour surfaces are generated by employing the Monte-Carlo method (Tsang et al., 2004) representing the initial surface micro profile of the MRE model (Figure 1B). In the model, the surface profiles of MRE can be linear superposed by different sinusoidal curves. The coordinate of the scatter point in the profile curve can be obtained as: 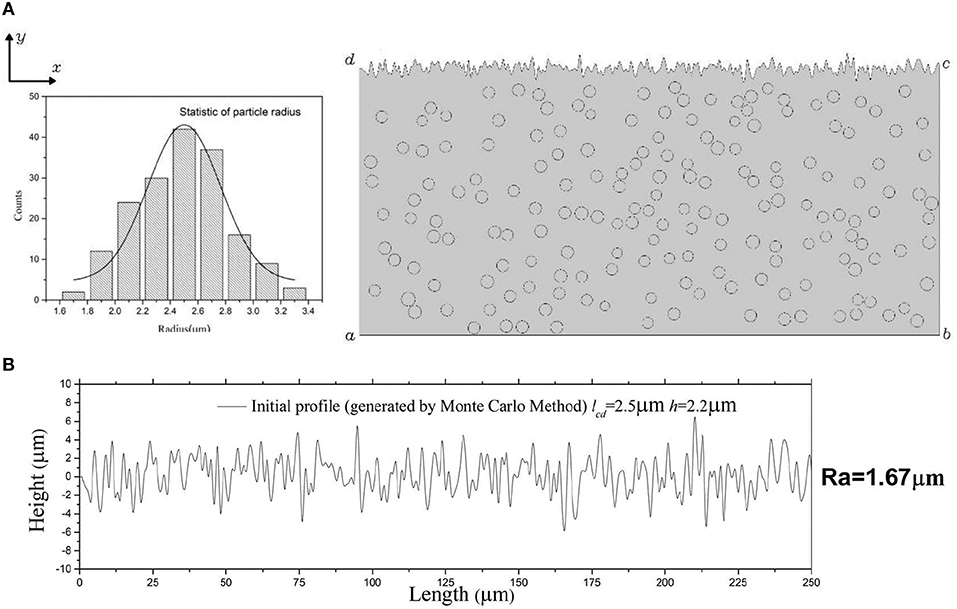 Figure 1. The two dimension mesoscopic model of MRE. (A) Left: statistic distribution of particle sizes, the total number of particles N = 175 and the average of the particle radius is 2.5 μm. Right: the particles are uniform distributed in a (250 × 130 μm) matrix area, and the particles volume fraction of MRE ϕ≈10.5%. (B) The generated initial surface micro profile of the MRE model. The surface roughness of the MRE (Ra) is 1.67 μm.

Where n is the scatter point number, (xn,yn) represents the coordinate of the n-th scatter point in the profile curve, F(ωj) is the Fourier transform pair of f (xn), and can be expressed as:

Where N(0,1) represents a random number of normal distribution with a mean value of 0 and a variance of 1. Δx is the distance between the nearest two scatter points in x-th direction. S(ωj) is the power spectral density of random surface profiles, and obeys gauss distribution function. And it can be expressed as follows:

In this work, we use parameter Ra to describe the roughness of the MREs' surface micro profiles. It can be expressed as follows:

A sequential FEM25 is adopted in this paper to solve the magneto-mechanical coupling problem and obtain the micro deformation of MRE model in Figure 1 by using commercial software COMSOL Multiphysics. Besides, in the mesoscopic scale, the applied magnetic field can be assumed to follow a uniform distribution. Therefore, in the magneto module (MFNC module in COMSOL), the magnetic scalar potential is equal zero on the boundary ab. The magnetic field applied on the MREs is in y-direction, and the particles will be magnetized in the same direction, and their magnetization is set to 1,000 kA/m. in the simulation. The other boundaries are considered as magnetic insulation. Meanwhile, in the structural mechanical module (SOLID module in COMSOL), we use U = (u,v) to describe the displacement field of MRE. The boundary condition is chosen in such a way where u = 0 for boundary ad, and v = 0 for boundary ab, and other boundaries are free to move. Also, the magnetic force Fi on each particle surface ∂Ωi can be calculated from the local field H with the aid of the Maxwell stress tensor σM as follow (Ly et al., 1999):

Where n is the unit normal vector on ∂Ωi, μi, μ0 is the permeability for the particles and matrix, respectively, I is the 2th rank unit tensor. 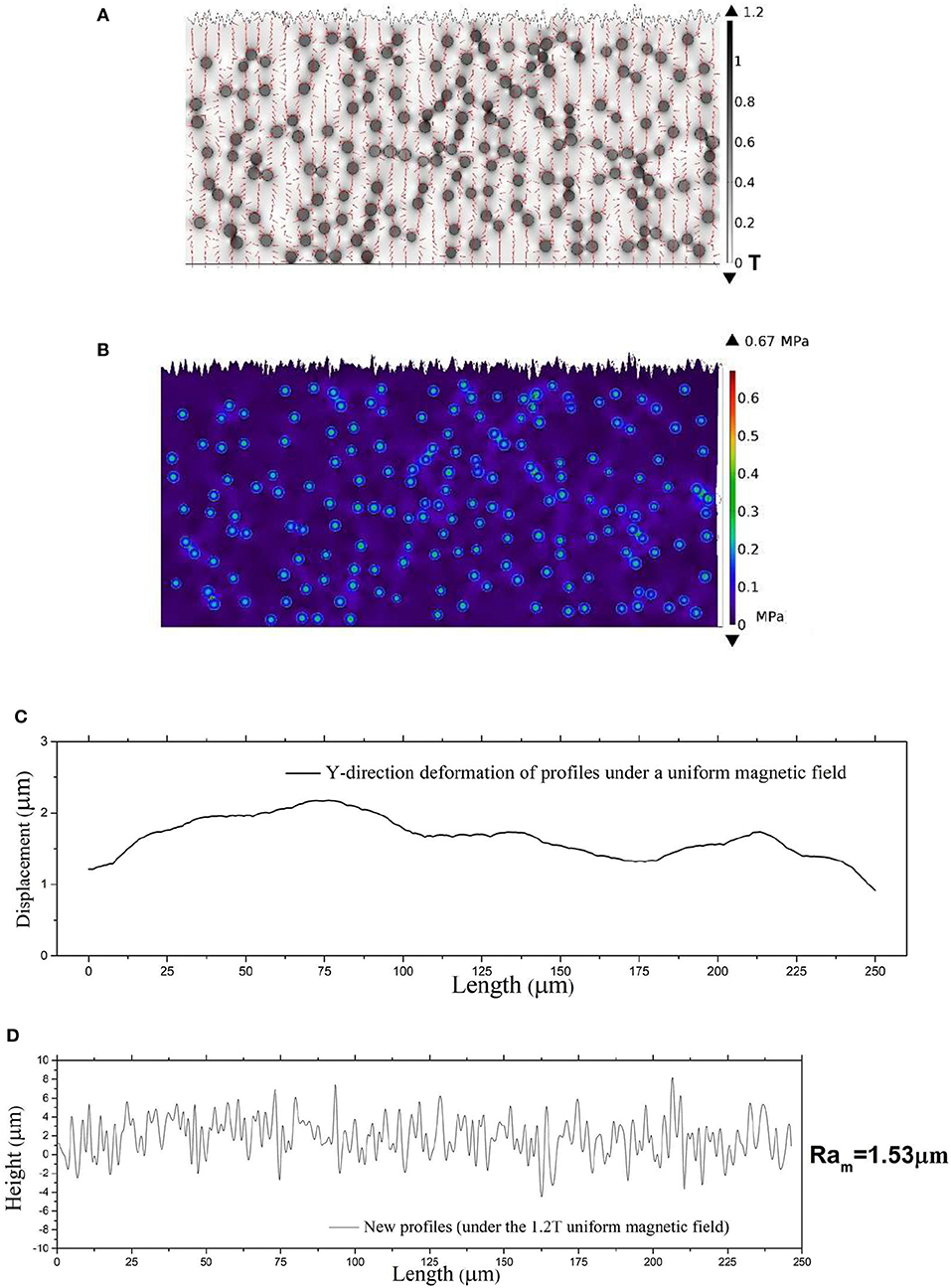 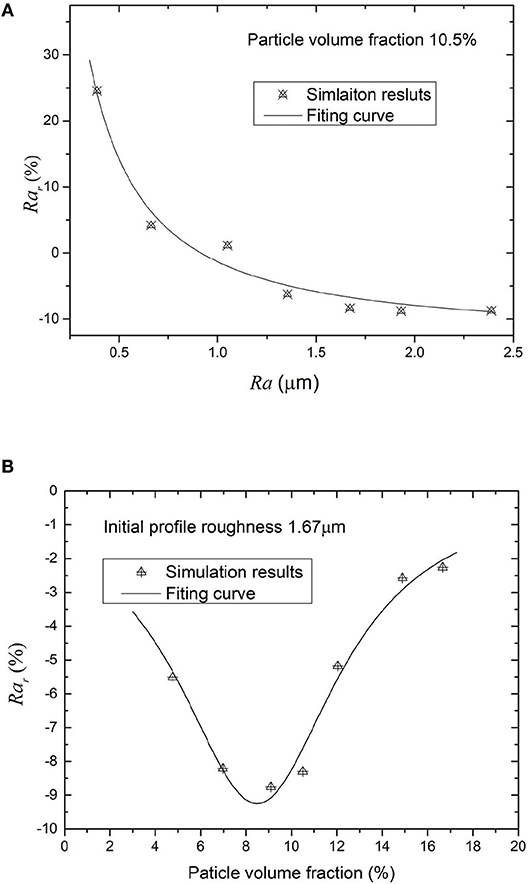 In this section, two kinds of isotropic MREs are manufactured by uniformly embedded magnetic particles into silicon rubber (HT-18; Shanghai Tongshuai Co., Ltd, China). As shown in Figure 4, One kind of MREs is the samples are prepared by using the glass mold, and the other is made by the iron mold. So, the latter has rougher surface than the former. A white light interferometer (ContourGT-K, Germany BRUKER company), of which the vertical resolution can reach 0.01 nm is used to obtain the three-dimensional morphology of all MRE samples. 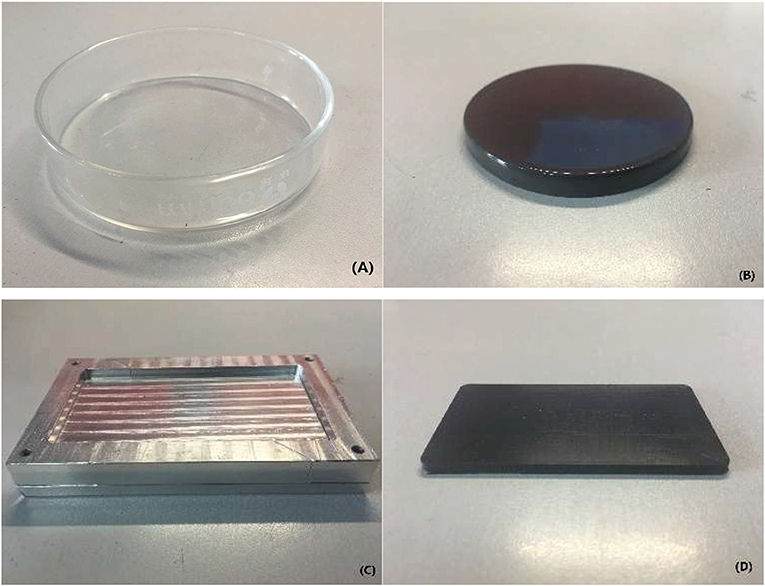 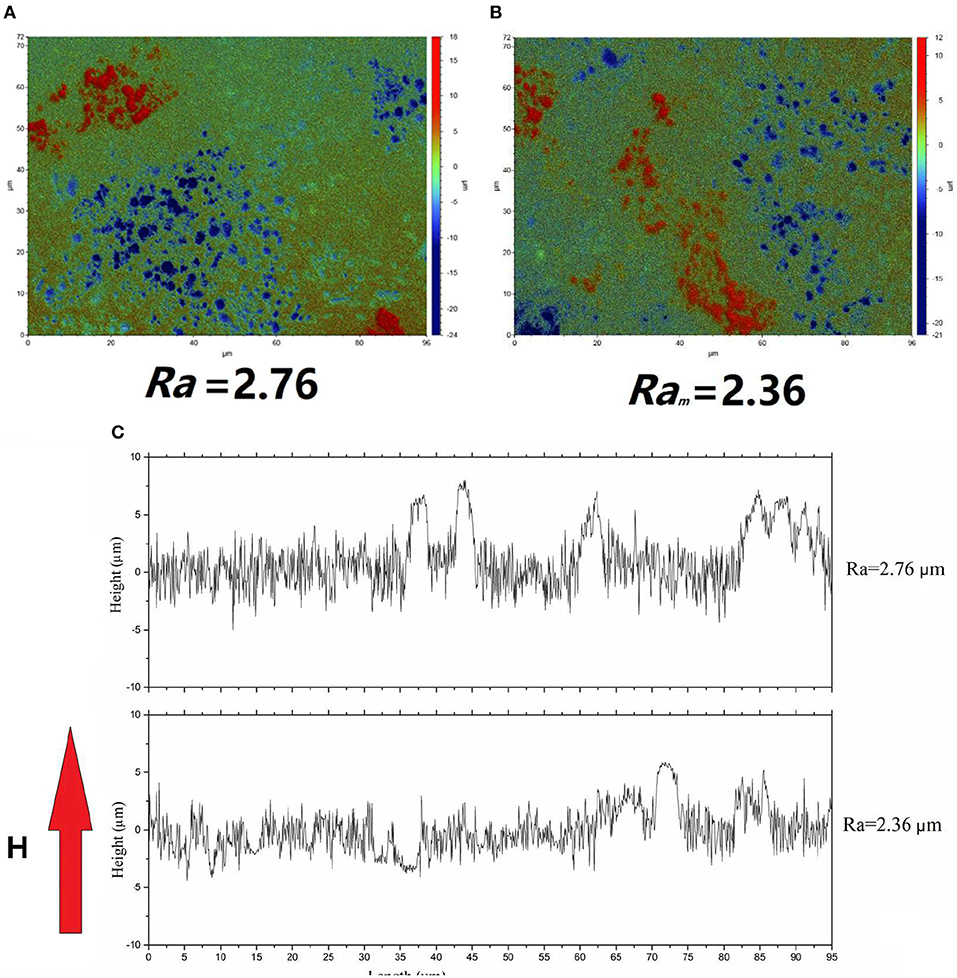 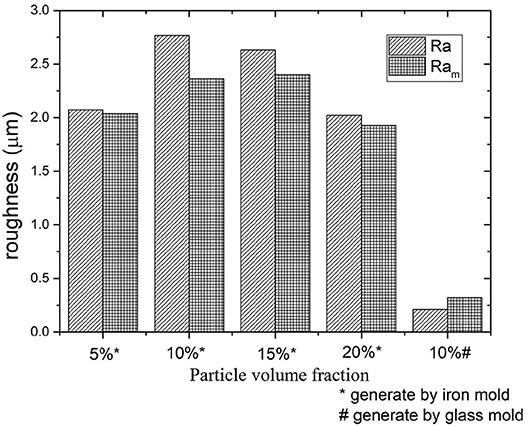 In summary, a mesoscopic model that considers deformation of surface micro-structures of MREs has been established to predict the surface roughness of MREs under magnetic fields. The model can explain how the field-induced friction of MRE changes as a function of particle contents, and how the initial surface roughness affects the changes. In addition, the proposed model has been verified experimentally. These findings may contribute to the area of interfacial friction control, in which controllable friction surfaces or techniques are expected to apply for the design of high efficient smart devices and mechanical systems.

RL and XL contribute the experimental parts of this works. XW gives some advises of this manuiscript and farbricates the MRE. SC writes the paper and establishes the surface model of MRE.

Copyright © 2018 Chen, Li, Li and Wang. This is an open-access article distributed under the terms of the Creative Commons Attribution License (CC BY). The use, distribution or reproduction in other forums is permitted, provided the original author(s) and the copyright owner(s) are credited and that the original publication in this journal is cited, in accordance with accepted academic practice. No use, distribution or reproduction is permitted which does not comply with these terms.