To overcome these problems, lots of efforts have been conducted to use high thermal conductivity fillers, such as graphene, carbon nanotubes (CNTs), and whiskers, to improve the composite properties. Taking silicon carbide whiskers (SiCw) for example, it is an ideal filler that can be used to solve the aforementioned problems due to their high specific strength, thermal stability, and thermal conductivity (Xin et al., 2012; Xia et al., 2013). Hua et al. (2006) prepared SiCw-reinforced SiC ceramic matrix composites (CMCs) using chemical vapor infiltration (CVI), and it was found that the flexural strength was significantly higher than that of CMCs. Feng et al. and Hua et al. introduced SiCw as reinforcements to strengthen SiC ceramics (Hua et al., 2006), and the composite exhibits bending strength of 383 ± 19 MPa (Feng et al., 2015). Xie et al. (2013) found that incorporating SiCw in SiC provides the prepared composites with higher flexural strength, tensile strength, and fracture toughness.

Based on these research results, inserting SiCw can increase the fracture toughness of SiC ceramic composites, where pullout of a rough whisker, crack deflection, and whisker bridging make up for the shortcomings of traditional C/SiC composites (Li et al., 2013; Wang et al., 2013). Regrettably, they are addicted to improve mechanical properties, ignoring the more important functional properties like longitudinal thermal conductivity of composites. Thus, it is necessary to further investigate these material properties for wider application. In recent years, a novel laser-assisted chemical vapor infiltration (LA-CVI) technology was firstly reported by Wang et al. (2018a,b), which is primarily used to improve the density and mechanical properties of the C/SiC composites. It is an excellent method to construct longitudinal through micro-holes which can be used to insert high thermal conductivity fillers such as SiCw.

An SiCw slurry was formed from SiCw (density 3.22 g/cm3, diameter 1.5 μm, length 18 μm) serving as a reinforcing medium with isopropanol and toluene as solvents. Triethyl phosphate was used as a dispersing agent, and the slurry was mixed with a light ball mill (ZrO2) for 7 h. Phenylethyl phthalate and glycerol were used as plasticizers, and polyvinyl butyral (PVB) was used as a binder. These were added to the slurry, and ball mixing was performed for another 7 h. After adding a solvent (distilled water) and dispersing agent (triethyl phosphate), the slurry was placed in a polyurethane ball mill tank for continuous mixing for 24 h. An SiCw slurry was obtained. The modified C/SiC-SiCw composite was prepared in three steps. First, a backfill channel was prepared in a semi-dense C/SiC composite using an ultrashort pulse laser. The composite was sealed with the SiCw slurry via vacuum impregnation at negative pressure. Finally, the SiCw-reinforced C/SiC composite was prepared by compaction through CVI for 100 h, and LA-CVI-C/SiC-SiCw composites were obtained.

The microstructural characteristics and the fracture surface of the LA-CVI-C/SiC-SiCw composites were determined in detail with a scanning electron microscope (SEM, S4700, Hitachi). Three-point bending tests were used to measure the flexural strength with a loading speed of 0.5 mm/min using 3 × 9 × 60 mm3 test bars on a universal material testing machine (Instron-5567). The test was conducted according to ASTM standard C1341. The thermal conductivity (λ) was deduced with a Φ12.7 × 3 mm2 using the equation: λ = α × Cp × ρ, where ρ is the measured density and Cp is the estimated specific heat capacity, which were determined using the laser flash method (LFA 427, NETZSCH, Germany).

Figure 1 shows cross-sectional images of the LA-CVI-C/SiC-SiCw composites. The SiCw sealed inside the mass transfer channel is dense and can be better combined with the SiC coating, but a small number of pores form via high-temperature decomposition and volatilization of the organic additive and the PVB binder. There was a large hole in the middle of the SiCw column along the thickness direction, which is due to the high aspect ratio of SiCw, columnar geometry, and SiCw slurry with high viscosity and poor fluidity. Moreover, SiC slurry with higher viscosity is helpful to increase the content of the SiCw. Nevertheless, it is adverse to the fluidity of SiCw slurry and difficulty to form the SiCw column during vacuum impregnation process. Similar to the deposition of PyC on CNTs (Thostenson et al., 2001), SiCw exhibits a “self-thickening” phenomenon due to densification during CVI. Due to different orientations, SiCw presents typical regular and irregular hexagon, which will be surrounded by SiC matrix during CVI process. SiC molecules formed in the reaction would adhere to the nucleation center of SiCw, and SiC was deposited on the surface of SiCw, and SiCw is wrapped in the SiC matrix. 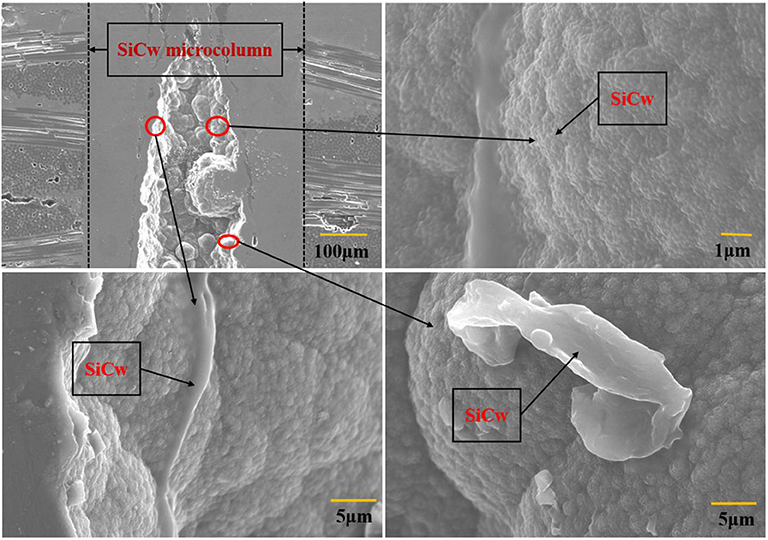 Figure 2 shows the three-point bending strength curve of CVI-C/SiC composite samples and LA-CVI-C/SiC-SiCw composite samples in which the three-point bending strength (600 MPa) of LA-CVI-C/SiC-SiCw composites was 27.6% higher than that of CVI-C/SiC composites (470 MPa). The fracture modes of the two composite materials vary greatly during three-point bending. The force–displacement curve from the LA-CVI-C/SiC-SiCw composite has a larger slope between the linear segment and the near-linear segment before reaching its maximum, indicating that the corresponding material has higher modulus and stiffness. The linear section of the force–displacement curve from the LA-CVI-C/SiC-SiCw composite corresponds to the highest intensity point, suggesting a larger base cracking stress. This is because SiCw has a high modulus of elasticity and tensile strength, which can significantly improve the strength of the material when the whiskers are well-combined with the SiC matrix (Kang et al., 2004). Moreover, the presence of the SiCw-modified column greatly increases the interlayer bonding force, prevents delamination, and significantly improves the flexural strength, and fracture toughness of the SiC composite (Hua et al., 2006). Also, relevant research shows that the SiCw-toughened SiC CMC can be successfully prepared by CVI method, which makes the SiCw maintain its original morphology and mechanical properties, which greatly improves the bending strength and fracture toughness of the composites (Hua et al., 2010). 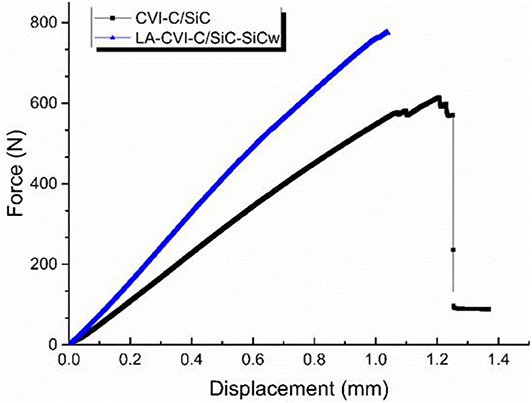 Figure 3 shows a cross-sectional view of the LA-CVI-C/SiC-SiCw composite after failure. One can see that a large number of fibers and fiber bundles were pulled out, and the length of fiber extraction ranged from tens to hundreds of micrometers, which corresponds to ductile fracture behavior. On the other hand, the fracture shows a flat morphology and only a small number of fibers are pulled out due to the high density of the SiC matrix, illustrating the brittle nature of the composite. With the high density and strong bonding, the fiber, and the coating of composites cannot dissociate effectively when the stress concentrates near the fiber. Then, the crack continues to transmit through the fiber, resulting in smooth fracture. Figure 4 shows SEM images of different cross sections of the LA-CVI-C/SiC-SiCw composites. SiCw exhibited different morphologies: wrapped SiC fiber bundle, embedded in the matrix, and wrapped single fiber. Adding with SiCw, the density of the composite can be improved and the bonding force between layers can be increased greatly. When the crack is transmitted to the fiber surface or the matrix, SiCw hinders or deflects continued expansion of the crack. Hence, the crack deflects when it propagates to the end or radial direction of SiCw. Therefore, due to the presence of SiCw, the crack continued to expand with layered fiber debonding rather than expanded to form a penetrating crack directly. The main mechanism of SiCw toughening composites is as follows: whisker bridging, whisker pulling out, and crack deflection (Zhao Y. et al., 2018). 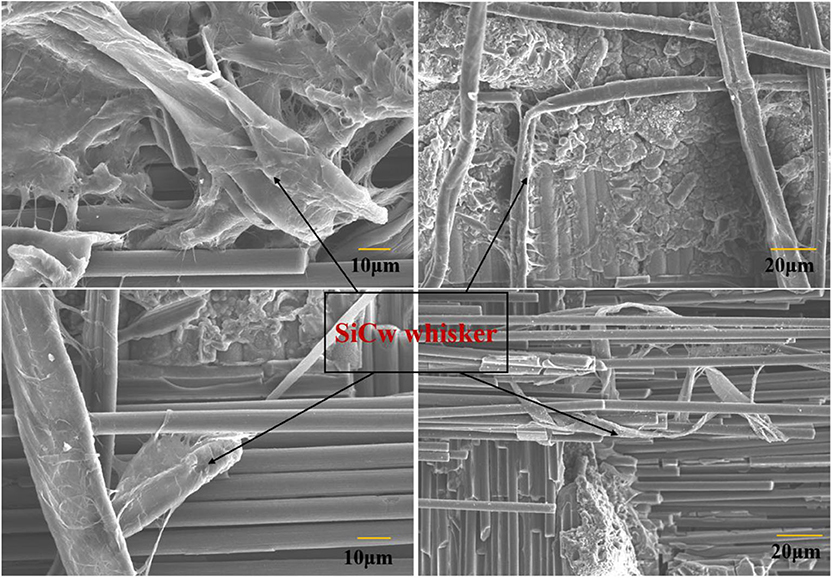 The contribution of SiCw bridging to the toughness can be expressed as:

where ΔJfb is the energy dissipated at the interface; EC and EW are the elastic modulus of the composite and SiCw, respectively; Vfb is the volume fraction of SiCw with bridging effects; is the fracture strength of SiCw; r and τi are the radius of SiCw and friction of the debonding interface, respectively.

ΔJ∞ is the energy consumed by SiCw extraction, and EC is the elastic modulus of composite. A∞ and l∞ are the area percentage and length of pulled out SiCw, respectively.

is the fracture toughness of the matrix.

Figure 5 shows the thermal conductivity of the two composites along the thickness direction and its variation with test temperature between room temperature and 1,200°C, in which the thermal conductivity of both CVI-C/SiC and LA-CVI-C/SiC-SiCw composites decreased as temperature increased. This occurs because phonon scattering increases and the average free path of a phonon decreases when the temperature increases to 800°C. The total emissivity and phonon conduction of LA-CVI-C/SiC-SiCw and CVI-C/SiC show a trend of increasing first and then decreasing with the increase of temperature. 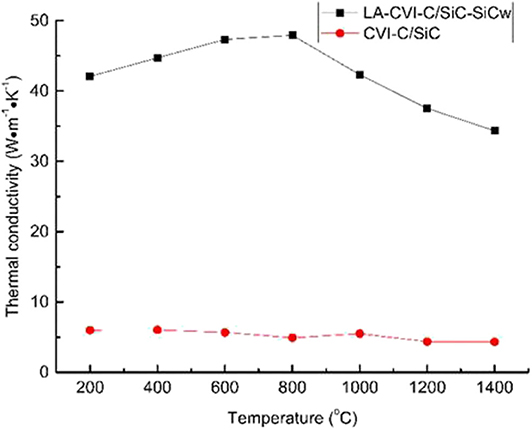 The Cp of LA-CVI-C/SiC-SiCw was about 7.417 J/g/k, which was close to the Cp of CVI-C/SiC (5.461 J/g/k). However, the highest thermal conductivity of LA-CVI-C/SiC-SiCw reached 45.13 Wm−1K−1, which is a factor 4 to 5 larger than that of the CVI-C/SiC composite at room temperature (10 Wm−1K−1). The difference in thermal conductivity is primarily related to the oriented columnar design of SiCw, as well as its interlayer distribution and material density. For one thing, with the increase of LA-CVI-C/SiC-SiCw composite density, not only the change of the morphology of composite but also the reduction of the porosity. Therefore, it improves the heat transfer. For another, in the process of densification of LA-CVI-C/SiC-SiCw composite, the cauliflower-like structure formed on the surface of the SiCw, which increases the absorption and polarization of the electromagnetic wave. For SiCw, the average free path of phonon increases accompanied by the grain growth. It is beneficial to improve the thermal radiation performance of LA-CVI-C/SiC-SiCw.

C/SiC-SiCw composite was developed via LA-CVI technology combined with vacuum impregnation. The inserted SiCw in the C/SiC composite were served as the second phase, which form a unique interlaminar strengthening structure in the C/SiC composite along the thickness direction, yielding a unique three-dimensional network structure. It could be concluded that the bending strength (600 MPa) of the LA-CVI-C/SiC-SiCw composites was 27.6% higher than that of CVI-C/SiC composites (470 MPa). With the fiber debonded, fractured, and pulled out hierarchically, the failure crack propagated expressed Step-extension. Meanwhile, the thermal conductivity (45.13 Wm−1K−1) of LA-CVI-C/CNTs/SiC composites was four to five times larger than that of the CVI-C/SiC composites (10 Wm−1K−1).

The datasets analyzed in this article are not publicly available. Requests to access the datasets should be directed to wangjing1@nwpu.edu.cn.

The authors acknowledge the support from the Chinese National Foundation for Natural Sciences (Nos. 51972269, 51602257, and 51672217), the Fundamental Research Funds for the Central Universities, the Creative Research Foundation of Science and Technology on Thermostructural Composite Materials Laboratory, and the Analytical and Testing Center of Northwestern Polytechnical University.

Copyright © 2020 Wang, Liu, Wang, Zhang, Li and Cheng. This is an open-access article distributed under the terms of the Creative Commons Attribution License (CC BY). The use, distribution or reproduction in other forums is permitted, provided the original author(s) and the copyright owner(s) are credited and that the original publication in this journal is cited, in accordance with accepted academic practice. No use, distribution or reproduction is permitted which does not comply with these terms.