Functionally graded materials are attracting more attentions because of the continuously varying properties in different locations. How to design and fabricate FGMs has become a key and difficult point. In this paper, a magnetic-field-driving method is developed to prepare Ni/epoxy resin FGMs by moving a narrow magnetic field from one end of the sample to the other end with the moving direction perpendicular to the field direction. Ni follows the moving of the magnetic field, and a gradient distribution is obtained. The composition gradients are influenced by Ni content, moving velocity, and also cycle times. The results illustrate that this magnetic-field-driving method is an effective way to prepare FGMs, which is very promising into scientific and technological applications.

By optimizing the magnetic circuit, Ni/epoxy resin FGMs have been fabricated by a magnetic-field-driving method (Li et al., 2018), in which the magnetic field moves perpendicular to the field direction, and the magnetic Ni particles move following the field and forms gradient distribution along the field moving direction. It indicates that the magnetic-field-driving method is an effective way to prepare FGMs. However, it is still unclear how some certain key parameters affect the final structure. In this paper, the influences of Ni content, moving velocity of magnetic field and field cycle time on microstructure and elemental distribution were further investigated.

Epoxy resin with good fluidity before curing was used as matrix materials. Ni has good high temperature stability, low coefficient of thermal expansion and excellent magnetic properties, so Ni particles with an average diameter of 1.2 μm were selected as magnetic components. Diethylene triamine was used as curing agent. Ni and epoxy resin with different proportions were stirred uniformly and then poured into a 30 × 10 × 2 mm3 cuboid mold. A vertical magnetic field with narrow spatial distribution was applied on one end of the mold, then moved horizontally to the other end, and finally moved away. In this procedure, Ni was magnetized and pulled from left to right by the magnetic field. If necessary, the magnetic field was moved back to the original end of the mold along different path, during which the mold was not affected by the field. This is one cycle. Multiple cycles were carried out respectively in our experiments, if necessary. The schematic illustration of the preparation of the magnetic-field-driving method is shown in Figure 1. The magnetic field was provided by a combined magnet with an air gap of 3 × 50 × 10 mm3 and 200 ± 1 mT field in center. 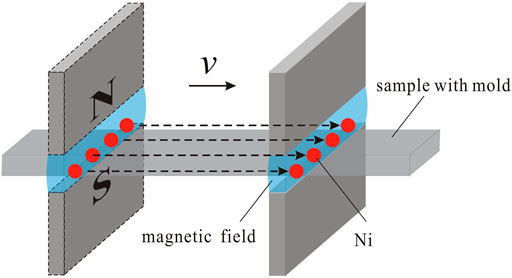 The microstructures of the cured sample were observed by the optical microscopy (MeF-3, Reichert, Austria). The elemental distribution was analyzed using image analysis techniques. The samples were then cut into small pieces to measure magnetic property by a Vibrating Sample Magnetometer (Lakeshore 7407, USA), electrical resistivity by a High Resistance Meter (ZC90, China), light transmittance by a Spectrophotometer (U-4100, Japan).

The cross section of the cured sample was defined by oxy plane parallel to the field moving direction as shown in Figure 2A. Figures 2B–E show the optical micrographs of sample with the Ni content of 5, 10, 15, and 20 wt%, respectively. The magnetic field cycled 5 times with a velocity of 1 mm/s. The gray background is identified to be epoxy resin, and bright dots are Ni. Ni increases gradually from left to right in all samples. It suggests that Ni particles move from left to right following the motion of the magnetic field, and finally composition gradients are formed. Especially for the sample with 5 wt% Ni, all particles are driven away from left end by the applied field, while there is still some Ni left in the left end for the sample with 20 wt%. 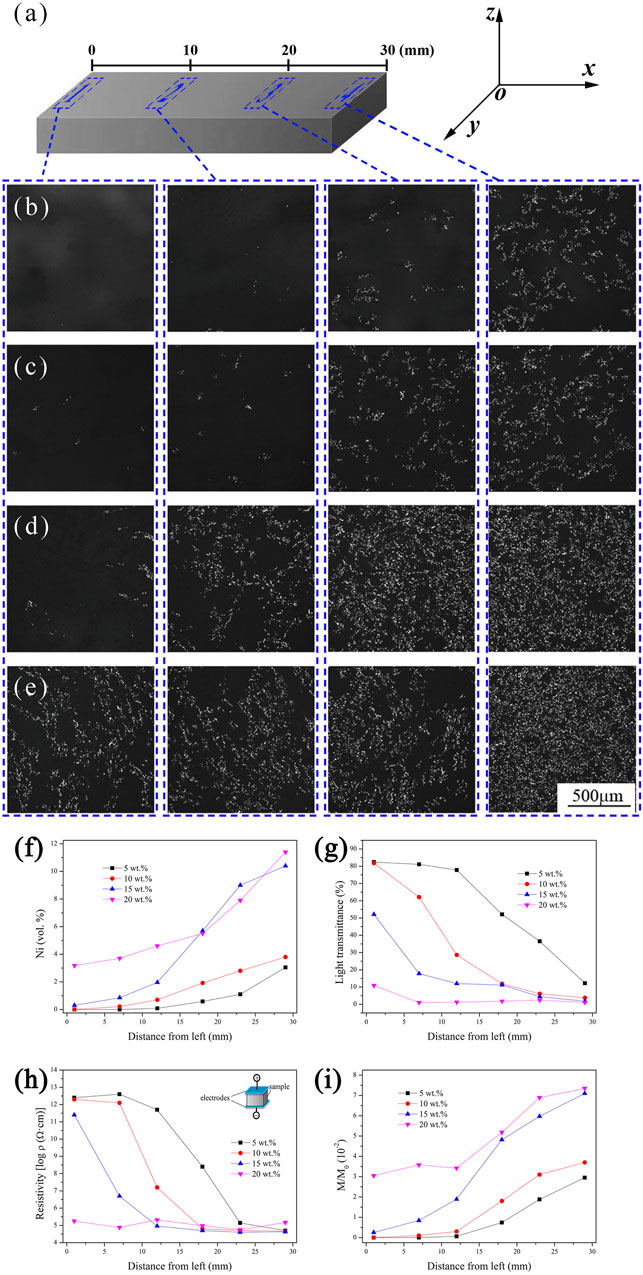 FIGURE 2. Dimensional orientation of experiment: ox is the field moving direction, oy is the transverse direction and oz is the magnetic field direction, and the corresponding regions of each microstructure figure in Ni/epoxy resin samples (A); Optical micrographs of Ni/epoxy resin samples with various Ni contents: (B) 5 wt%; (C) 10 wt%; (D) 15 wt%; (E) 20 wt%. The applied field of 200 mT cycled 5 times at a velocity of 1 mm/s; Variation of Ni concentration (F), light transmittance (G), electrical resistivity (H) and specific saturation magnetization (I) with different Ni contents as a function of the distance from the left side of the samples.

Figure 2F plots Ni distributions at the cross-section of the samples with various Ni content. Composition gradients with Ni increasing from left to right are observed in all samples. Figure 2G shows the distribution of optical property with the distance from left. The light transmittance decreases gradually along the field moving direction, and also decreases with Ni content of from 5 wt% to 20 wt%. Compared to Figure 2F, the light transmittance of polymer composites is inversely proportional to its concentration of fillers from left to right, because the existence of Ni particles in the composites blocked the light propagation in translucent epoxy resin.

The results reveal that the increase of Ni content makes it difficult to achieve composition gradient. With the increase of Ni content, the distance among particles gets small, and the magnetic interaction becomes strong. Chain-like Ni clusters formed along field direction (Yan et al., 2009) under the effects of both the magnetic field and interaction among particles (Peng et al., 2007), which cannot be observed in xoy plane, but in xoz plane (Li et al., 2018). The clusters make Ni move difficultly under magnetic field, which finally results in small composition gradient. Therefore, 10 wt% Ni content was selected for the following study. 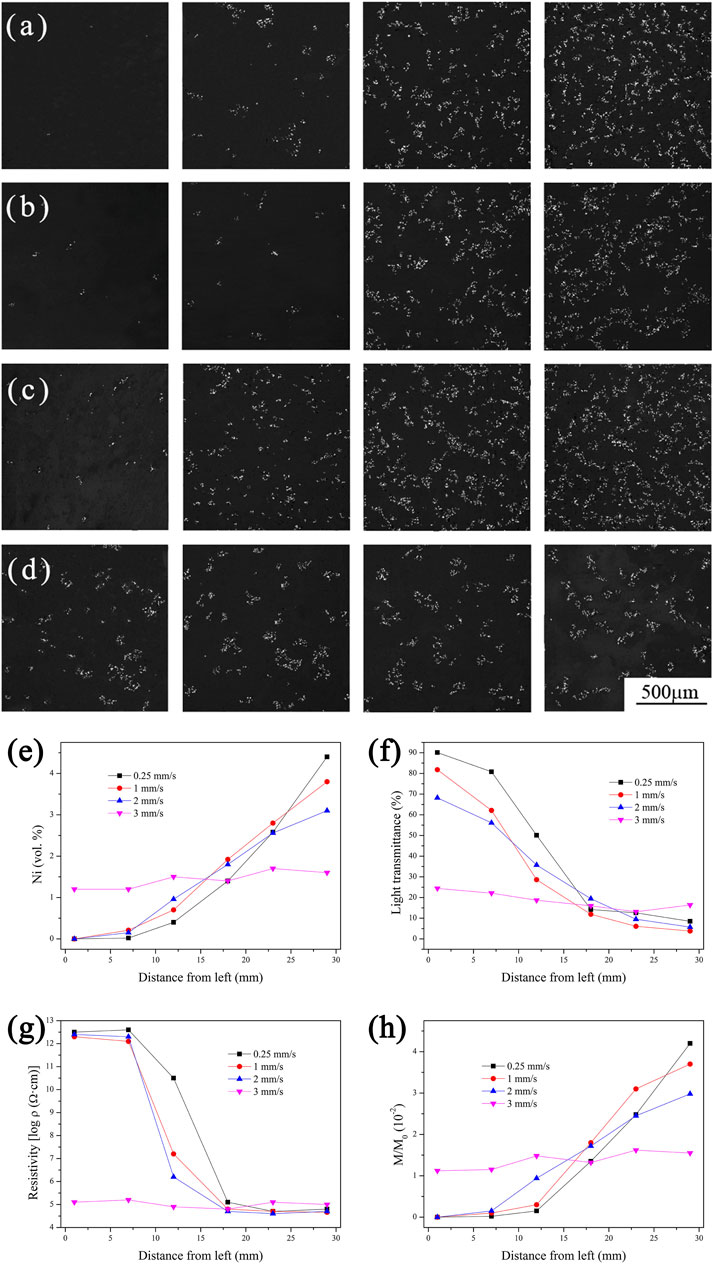 Once Ni particle moves at a velocity through the slurry, which can be regarded as a viscous liquid, it would experience viscous force. The value of viscous force is determined by Stokes’ law (Mánik and Holmedal, 2013), which is proportional to velocity of the Ni particle. The viscous force hinder the free moving of Ni particle, which makes Ni cannot always follow the movement of magnetic field, especially at a relative high velocity. On the contrary, at the low velocity, Ni particle can follow the moving of the field in a high probability, which leads to a steep composition gradient.

Figures 4A–D show the optical micrographs of the cured samples with the cycle time of 1, 3, 5, and 10, respectively. The velocity of the applied filed was 2 mm/s. For one single cycle (Figure 4A), Ni seems to distribute uniformly on the cross-section from left to right. As cycle time increased to 3 (Figure 4B), Ni starts gradually increasing from left to right. The gradient increases with cycle time (Figures 4B–D), and it becomes quite obvious for 10 cycles. 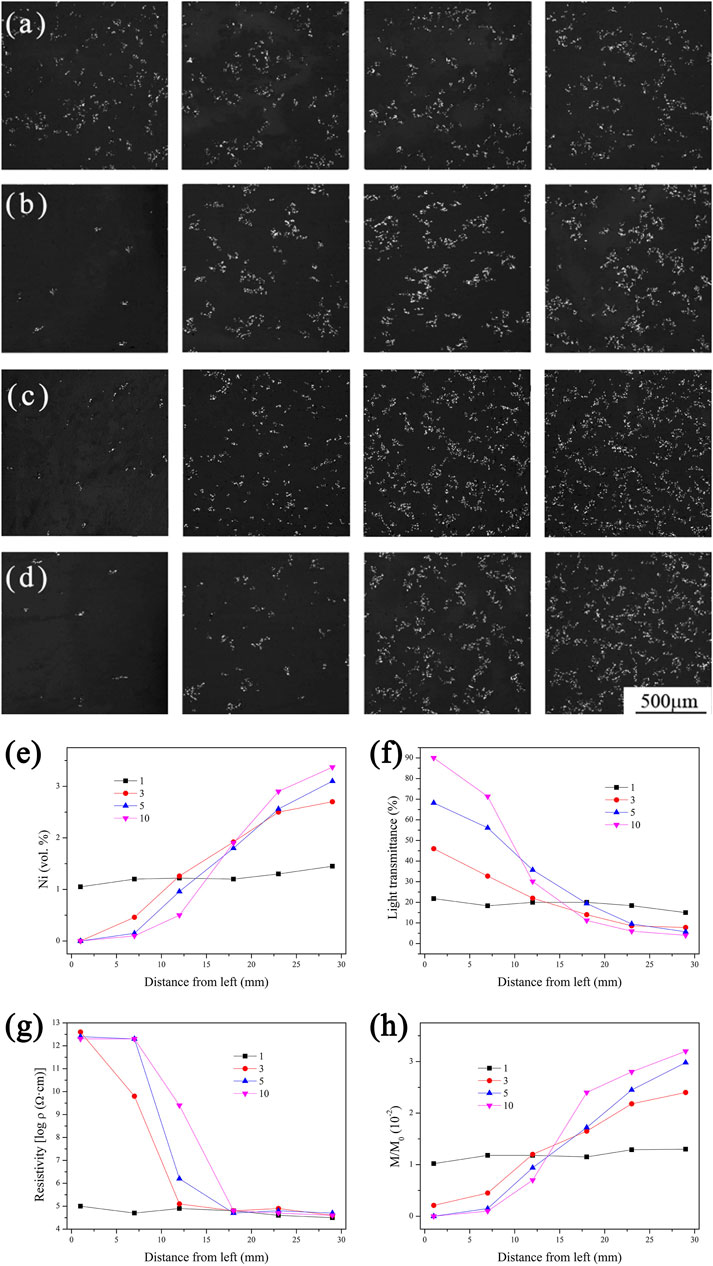 FIGURE 4. Optical micrographs of Ni/epoxy resin samples with various cycle times: (A) 1; (B) 3; (C) 5; (D) 10. The applied field of 200 mT was applied on the sample with 10 wt% Ni at a velocity of 2 mm/s. Variation of Ni concentration (E), light transmittance (F), electrical resistivity (G) and specific saturation magnetization (H) with different cycle times as a function of the distance from the left side of the samples.

In this method, all magnetic particles can be driven by the uniform magnetic field, which makes it easy to prepare FGMs. The ideal FGMs with desired composition gradient can be obtained by adjusting constituent parameters, moving velocity, and also cycle times. Generally, the above results indicate that the magnetic-field-driving method has been proved to be an attractive way to develop different kinds of FGMs suitable for scientific and technological applications.

Ni/epoxy resin FGMs were prepared using a magnetic-field-driving method by moving a narrow magnetic field from one end of the sample to the other end with the moving direction perpendicular to the field direction. Ni follows the moving of the magnetic field, and the gradient distribution is obtained. The composition gradients are affected by Ni content, moving velocity, and also cycle times. Compared to the preparation of FGMs by using gradient magnetic field, this magnetic-field-driving method is more effective, attractive and easier to prepare FGMs, which is very promising into scientific and technological applications.

Copyright © 2021 Zhan, Chang and Li. This is an open-access article distributed under the terms of the Creative Commons Attribution License (CC BY). The use, distribution or reproduction in other forums is permitted, provided the original author(s) and the copyright owner(s) are credited and that the original publication in this journal is cited, in accordance with accepted academic practice. No use, distribution or reproduction is permitted which does not comply with these terms.