The WC powder used in this research was supplied by Xiamen Golden Egret Special Alloy Co. Ltd., Xiamen, China, and the average grain size was 0.2 µm. To remove the surface oxide, WC powder was firstly pretreated with activated liquid consisting of 30 ml L−1 nitric acid (HNO3), 40 ml L−1 hydrofluoric acid (HF) and 3 g L−1 ammonium fluoride (NH4F). Then, the pretreated WC powder was used to prepare Y2O3-doped WC powder with Y2O3 contents of 1, 2, 3 and 4 wt.% by the chemical co-precipitation method. The specific process of activation pretreatment and preparation of Y2O3-doped WC powder were described in our previous study (Wang et al., 2018). The pure WC and Y2O3-doped WC were sintered with an SPS system produced by Sumitomo Coal Mining Co., Ltd. using a sintering temperature of 1600°C, sintering pressure of 45 MPa, a heating rate of 100°C/min and a holding time of 5 min. The YG3 cemented carbide used for comparative test was provided by Zhuzhou cemented carbide cutting tools co., Ltd. The compositions of the WC cemented carbides are shown in Table 1.

The oxidation weight gain test was carried out in a tube furnace. Specimens for the experiment with the dimension of about 10 mm × 10 mm × 5 mm were cut from the sintered samples. The surfaces of the specimens were ground and polished. Before the oxidation experiment, we measured the length and width of each surface of the specimens with a spiral micrometer with an accuracy of 0.01 mm, and then calculated the surface area. The specimens were placed in a tube furnace and were heated to the oxidizing temperature at a heating rate of 10°C/min, and the oxidizing temperature was held for a certain time before cooling off. Oxidizing temperatures of 600°, 700°, 750° and 800°C, and holding times of 30, 60, 90 and 120 min were used. The specimens before and after the oxidation were weighed using an analytical balance with an accuracy of 1 × 10−4g, each sample was measured five times and averaged. The fracture and surface of the oxidation layers were observed by field emission scanning electron microscopy (FE-SEM, Model: S-4800, Hitachi, Japan). The composition and phase of the oxidation products were analyzed by energy dispersive spectrometry (EDS) and X-ray diffraction (XRD, Model: D8-Advance, Germany) analysis. The electron cloud density of binderless tungsten carbide’s oxidation atom ball-and-stick model was simulated by Guassion09W software. 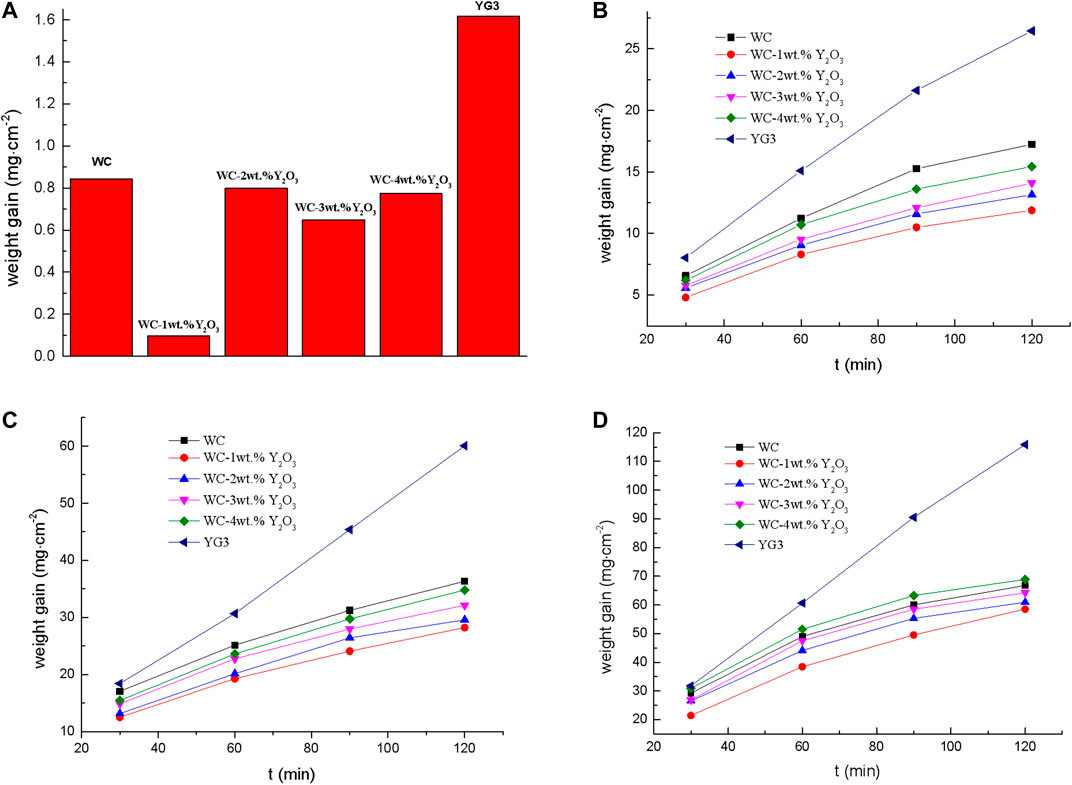 When the high-temperature oxidation kinetics curve of the material conforms to the parabolic law, it can be expressed by the following formula (Tatarko et al., 2013):

where is the mass change per unit surface area, mg cm−2;t is the oxidation time, min; k is the parabolic oxidation rate constant, mg2· cm−4 s−1; C is the constant that accounts for the initial reaction; k0 is a constant; Q is the oxidative activation energy, kJ mol−1; T is the oxidizing temperature, K; and R is the gas constant. 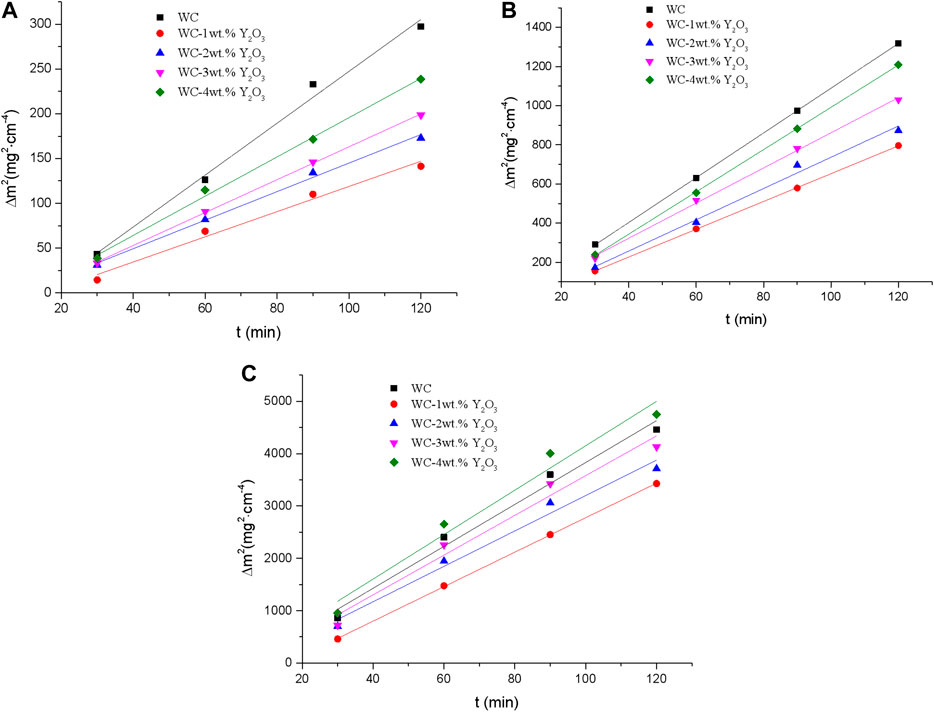 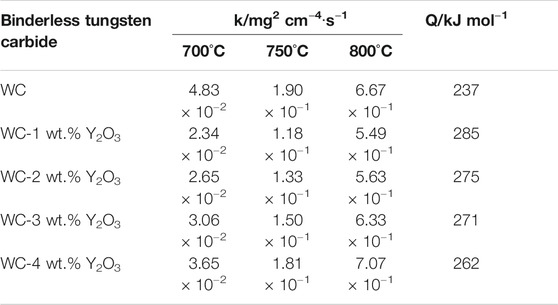 Observation and Analysis of Oxidized Surfaces and Cross-Sections 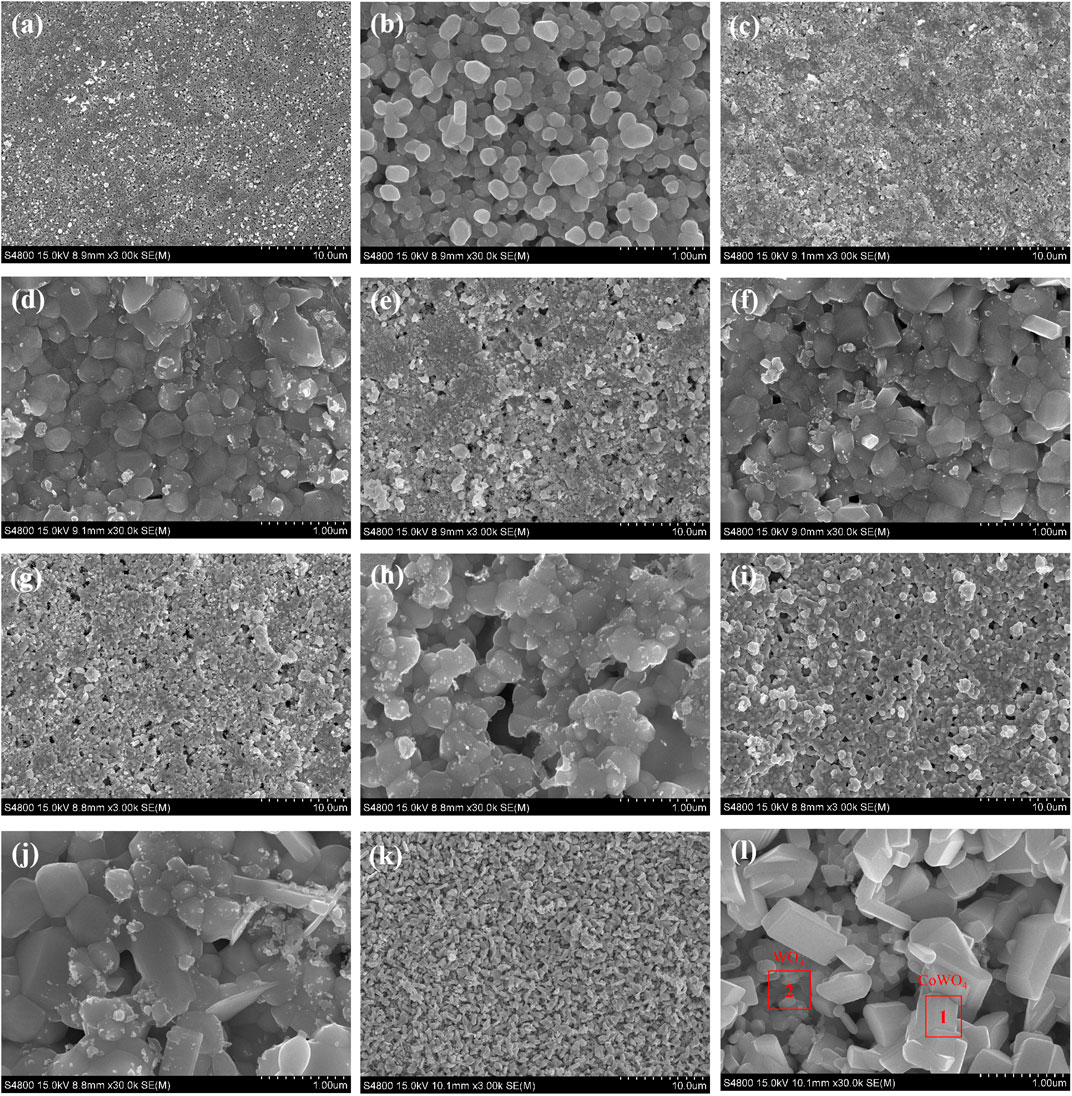 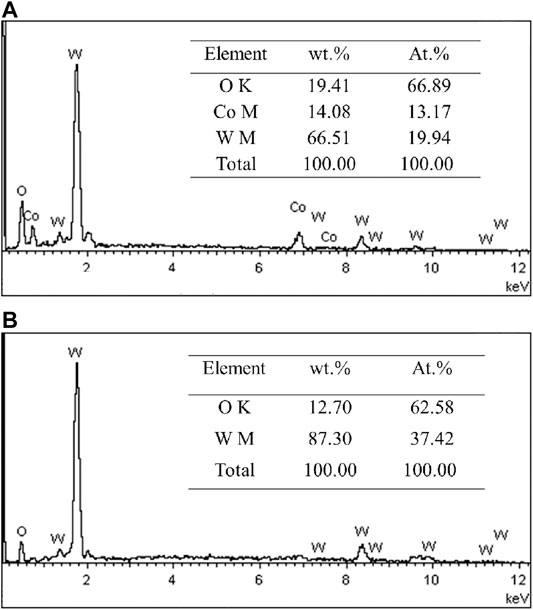 FIGURE 5. XRD patterns of the surface of oxidation layer of YG3 cemented carbide (A) and binderless tungsten carbide with different Y2O3 contents (B). 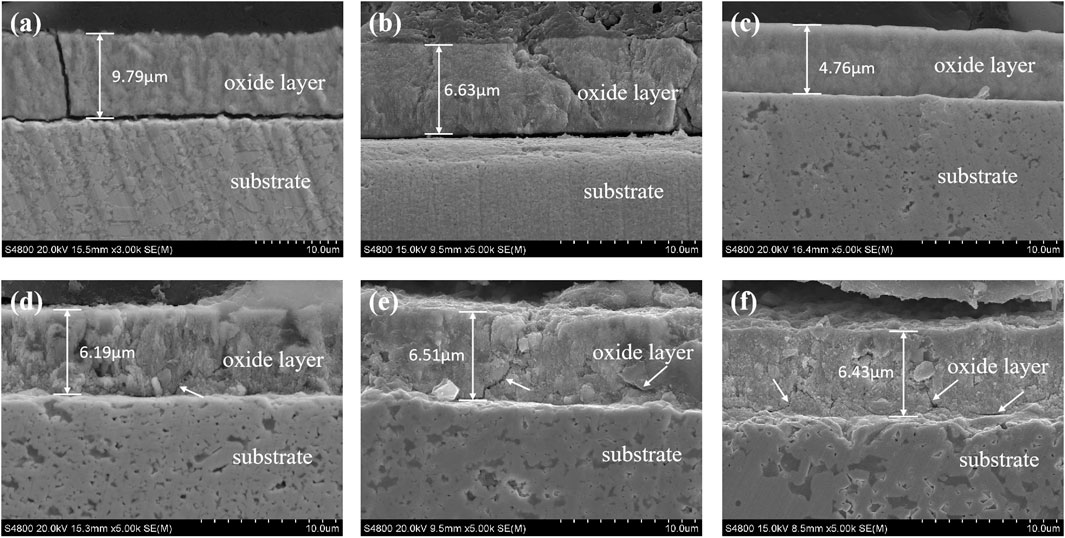 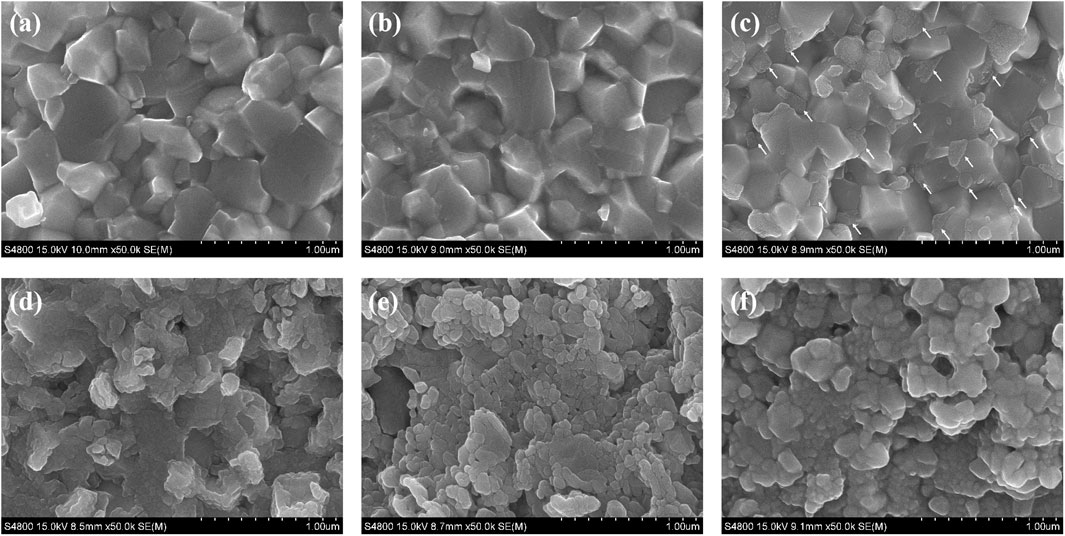 The binderless tungsten carbide doped with Y2O3 has good oxidation resistance, we suggest as follows:

Figure 8 displays the SEM surface morphology (Figure 8A) and elemental analysis (Figures 8B,C) of WC-4wt.% Y2O3. It can be seen that element yttrium is mainly distributed at the WC triangle grain boundaries indicated by the arrows in Figure 8A. Combined with the XRD pattern of WC-4wt.% Y2O3 (Figure 9), the element yttrium exists in the form of Y2O3 phase. The ionic radius of Y3+ (0.090 nm) is much larger than that of W4+ (0.066 nm), and therefore, it is difficult for Y2O3 to form a solid solution with WC, so that Y2O3 is present mainly in the WC grain boundaries, which is consistent with the results in literature (Liu et al., 2015; Jin et al., 2017; He et al., 2018). Oxidation reaction equations and corresponding change of Gibbs free energy (∆G) in WC-Y2O3 cemented carbide are shown in Table 2. Figure 10 shows the ∆G−T relation curves of each reaction according to Table 2. It can be seen from Figure 10 that the Gibbs free energy of WC oxidation reaction with Y2O3 or not increases with the increase of temperature, but greatly reduced while with Y2O3, which means the greater thermodynamic trend. Therefore, in the high temperature oxidation process, WC in the triangle grain boundary was first oxidized to Y2WO6. When the compact WO3 oxidation layer was formed with the bare WC, the growt.h of the oxidation layer is mainly determined by W4+ and O2− diffusion velocities along the grain boundary. The presence of the Y2WO6 with the high ionic radius, the transport of W4+ outward along the grain boundary and the diffusion of O2− inward along the grain boundary were hindered and thus the antioxidant capacity of binderless tungsten carbide was improved by the addition of Y2O3.

(1) The excellent adhesion between the oxidation layer and the substrate surface is enhanced with the “pinning effect” of Y2WO6. 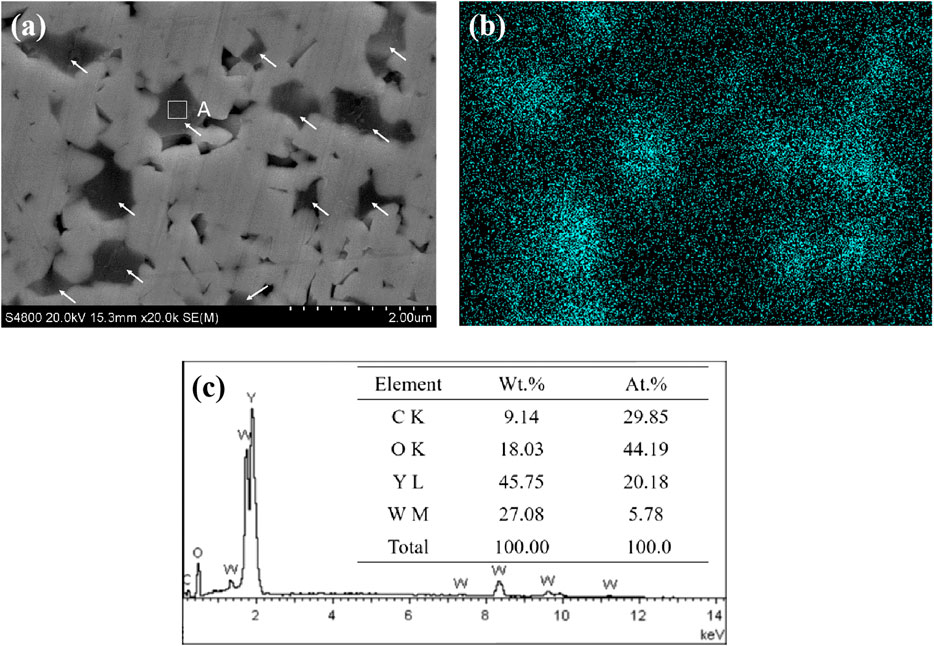 FIGURE 8. SEM surface morphology (A) and elemental analysis of WC-4wt.% Y2O3(B,C). (B) The distribution of yttrium in Panel (A); (C) EDS analysis result of micro zone A in Figure. a. 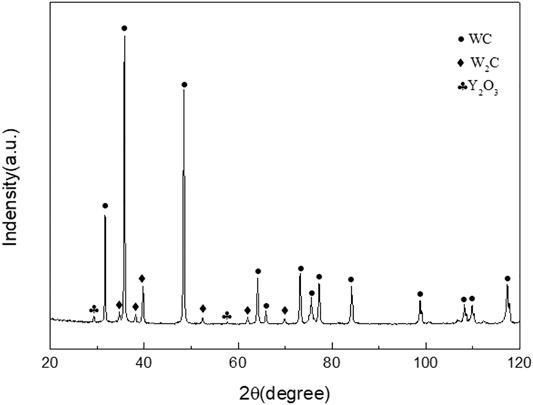 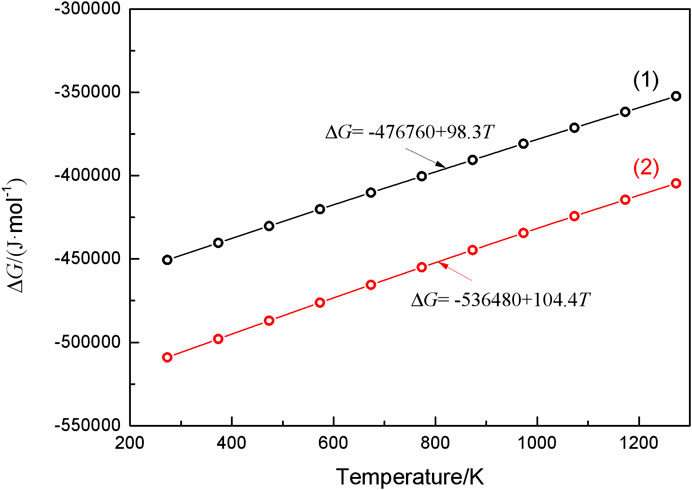 FIGURE 10. The change in Gibbs free energy (∆G) for the oxidation of component in WC-Y2O3 cemented carbide.

Figure 11 shows the oxidation layer/substrate atom ball-and-stick model (Zhong et al., 2015; Zhong et al.,2019) of pure WC and WC-Y2O3 cemented carbide, and the simulation calculation diagram of electron cloud density of frontier molecular orbits (HOMO and LUMO) of the two models calculated based on Guassion09W software. As can be seen from the atomic model in Figure 11A, WO3 oxidation layer is formed after pure WC oxidized. Electron cloud density simulation diagram in Figure 11B shows that there is no enrichment of electron cloud between atoms 4C and 1W in HOMO and LUMO frontier molecular orbits, which proves that the adhesion between WO3 oxidation layer and WC substrate is poor and WO3 oxidation layer is easy to fall off. In the atomic model doped with Y2O3 in Figure 11C, Y2O3 and WO3 are easy to oxidize to form a more stable Y2WO6 phase (seen from Figure 10). Since Y (electronegativity: 1.22) is the least electronegative atom than W (electronegativity: 2.36) and C (electronegativity: 2.55) atoms, part of the charge of Y atom will be transferred to atoms W-C, a certain degree of electron cloud enrichment can be clearly seen between atoms 4C and 1W in HOMO and LUMO frontier molecular orbits in Figure 11D, improving the adhesion between the Y2WO6 oxidation layer and WC substrate. The excellent adhesion between the oxidation layer and the substrate surface is enhanced with the “pinning effect” of Y2WO6 (Pint, 1996; Sun et al., 2016; Yu et al., 2017), which also leads to the improvement of the oxidation resistance. However, with the increase in the Y2O3 content, the local enrichment of Y2O3 results in the local rapid oxidation of tungsten carbide and overflows a large amount of CO and CO2 gases. A large outflow of gases resulted in the presence of defects such as pores or cracks (seen from Figures 3, 6), which promotes oxidation rate and reduces the antioxidant capacity of binderless tungsten carbide. The oxidation resistance of binderless tungsten carbide with 1 wt.%Y2O3 is the best among the samples with different content of Y2O3. 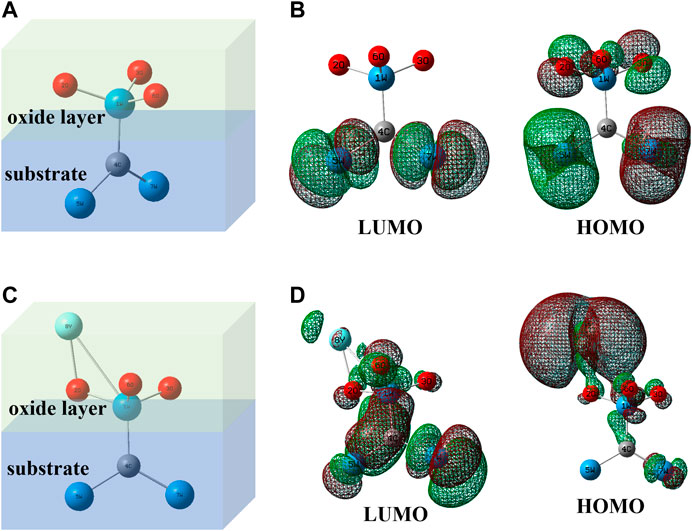 The original contributions presented in the study are included in the article/Supplementary Material, further inquiries can be directed to the corresponding authors

Copyright © 2021 Wang, Zuo, Zhu, Tu, Lin, Wu, Li and Zhang. This is an open-access article distributed under the terms of the Creative Commons Attribution License (CC BY). The use, distribution or reproduction in other forums is permitted, provided the original author(s) and the copyright owner(s) are credited and that the original publication in this journal is cited, in accordance with accepted academic practice. No use, distribution or reproduction is permitted which does not comply with these terms.