The magnesium lithium thermal control oxidation is a commonly used conductive anti-corrosion treatment method for aerospace. The corrosion behaviors of thermal control oxidation films for LA103Z alloys were studied in 3.5% NaCl solution. The corrosion characteristics with different immersion time were characterized by using scanning electron microscopy, energy spectroscopy, and electrochemical methods. The results showed that the corrosion of Mg-Li alloy with chemical oxidation film starts from pitting corrosion, gradually expands in depth in the early stage, forms corrosion holes, and then gradually develops into river-like morphology. In the last stage, the increasing corrosion products slow down the corrosion rate and gradually covers the entire sample surface. The corrosion product mainly consists of MgO, LiF, and MgCl2. Combined with the electrochemical characteristics, the corrosion mechanism was investigated.

As the lightest metallic structural materials (1.30–1.65 g/cm3), Mg-Li alloys have been widely used in space fields (Wu et al., 2020a; Wu et al., 2020b). In order to satisfy the functional requirements and adapt to the space environment, it needs to take out surface treatment such as plating, oxidation, and coatings for Mg-Li alloys (Xia et al., 2019; Zhang et al., 2019; Liu et al., 2021). However, due to the electrochemical activity of Mg and Li, the alloys have great corrosion risks in the service environment (Prando et al., 2019; Sun et al., 2020). Although there are few corrosive factors in space, the coastal launch site can bring severe corrosion for the products. Oxidation methods can form thermal control coatings, anti-corrosion coatings, coating suitable for bonding, etc., which are suitable for the structure applications of satellites (Shi et al., 2015; Guo et al., 2017; Yang et al., 2018; Qiu et al., 2020).

In this paper, the thin film of magnesium lithium LA103Z was fabricated by chemical oxidation, and the corrosion behavior was studied by immersion test in 3.5wt% NaCl solution. The morphologies and corrosion products were characterized, combined with the electrochemical analysis of sample with different corrosion time, and the corrosion evolution mechanism was also studied.

The specimen used for the test is LA103Z magnesium lithium alloy, and the chemical composition is given in Table 1. The material was cut into 40 mm × 40 mm×2 mm for experiment. Moreover, the specimens were polished by sandpaper from 400#, 800#, to 1,000#.

The electrochemical evaluation with different immersion time was performed by using IM6 electrochemical equipment in 3.5wt% NaCl solution at room temperature. The experiment employed a three-electrode system, a saturated calomel (SCE) electrode as reference electrode, a Pt electrode as counter electrode, the magnesium lithium alloy chemical oxidation sample as working electrode, and the sample exposure area was 1 cm2. The open circle potential (OCP) was tested for 600 s. The electrochemical impedance spectroscopy (EIS) was tested with sinusoidal signal disturbance voltage amplitude of 10 mV. The frequency range is 100 kHz–10 mHz. The polarization curve test range is -0.5 V ∼ +0.5 V (vs OCP), scan rate is 5 mV/s, the range of cyclic voltammetry test voltage is -0.25 V ∼ +0.25 V (vs OCP), and the scan rate is 5 mV/s.

The morphology of the film and its element content are shown in Figure 1. The surface of the film contains many micro cracks and holes. The main elements are Mg, O, and Cr.

FIGURE 1. The morphology and element content of the film. 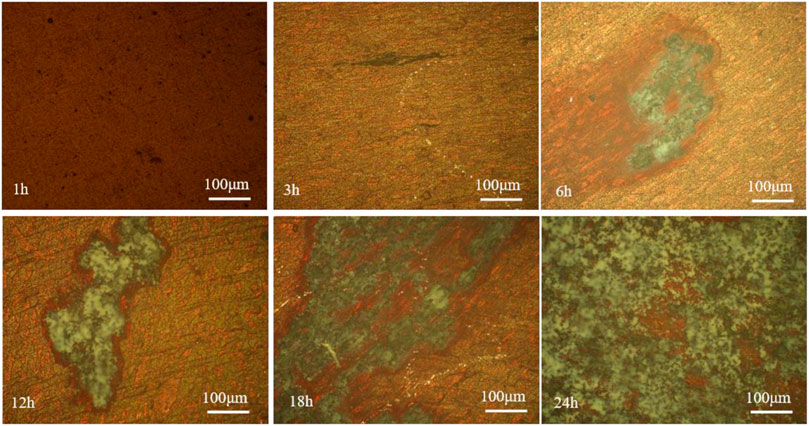 FIGURE 2. Surface morphologies of the specimens in 3.5% NaCl solution. 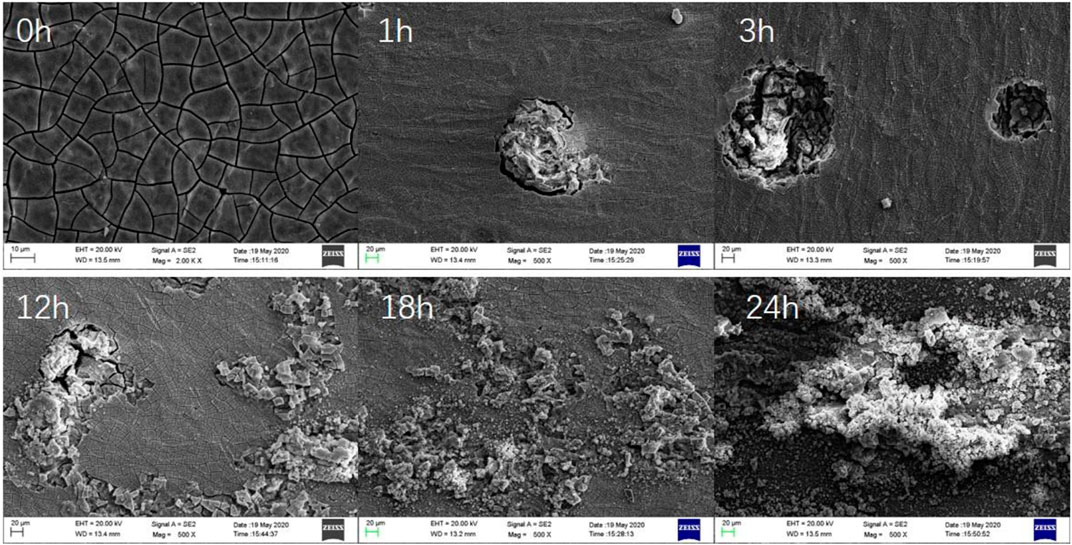 FIGURE 3. SEM morphologies of the specimens in 3.5% NaCl solution. 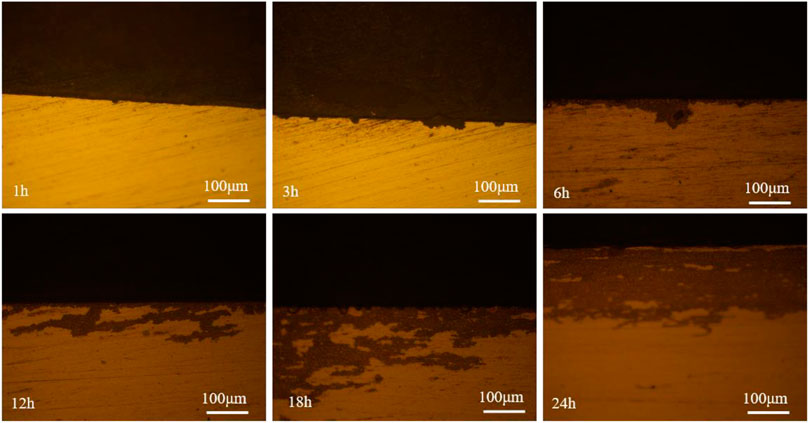 FIGURE 4. Cross-section morphologies of the specimens in 3.5% NaCl solution.

The corrosion products were analyzed by XRD and the results are shown in Figure 5. It can be found that the oxidation film is consisted with MgO, LiF, and MgCl2. As the corrosion happens, the diffraction peak intensity of MgO is much higher than that of Mg, which shows the opposite characters for 0 h, and the corrosion products contains MgCl2, which indicates that Chloride ions participate in the reaction and promote the formation of corrosion products. 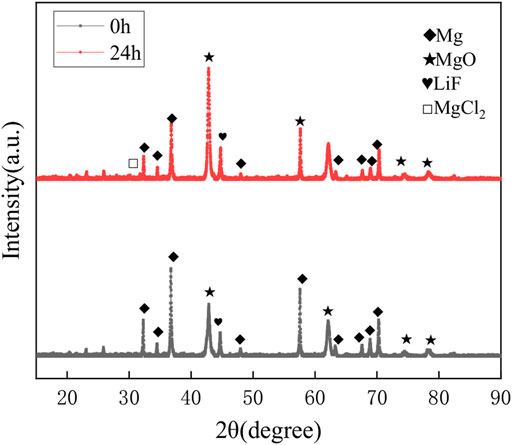 FIGURE 5. XRD results of the specimens in 3.5% NaCl solution. 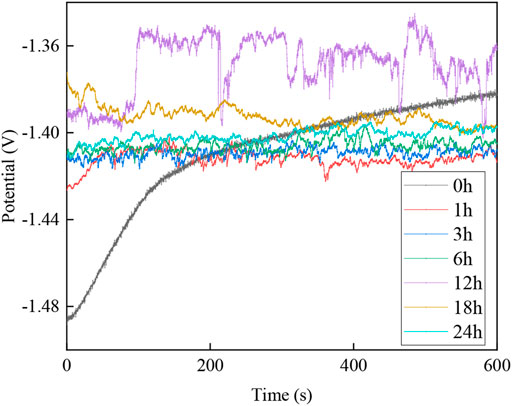 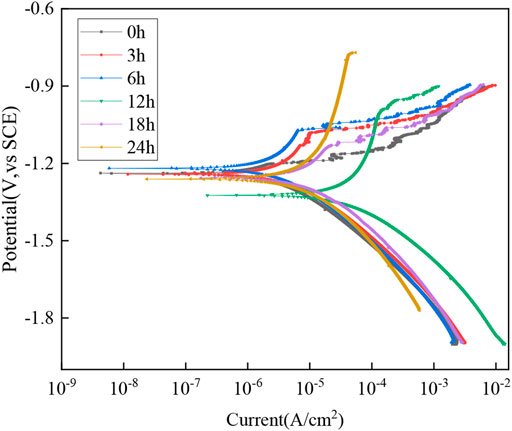 FIGURE 9. The polarization curves of the specimens with different immersion time.

The cyclic voltammetry curves after different immersion time are shown in Figure 10. It can be seen that the current response to voltage change of the specimens without immersion is the smallest and basically presents a reversible process, which indicates that the sample has good corrosion resistance. The corrosion processes are shown in Figure 11. As the reaction time increases from 0 to 12 h, the current response is more obvious and the degree of reversibility gets lower and lower, which demonstrates that the electrochemical reaction is more and more violent. But the irreversible process of the reaction weakens from 12 to 24 h, which is caused by the corrosion products. 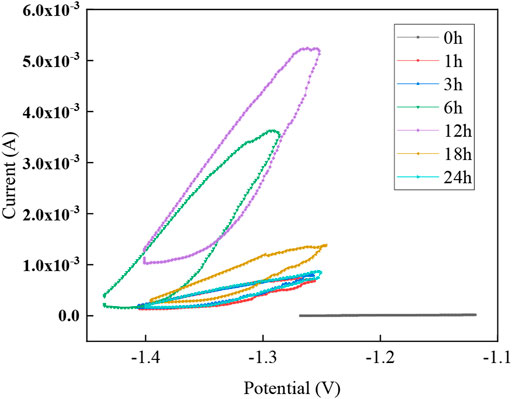 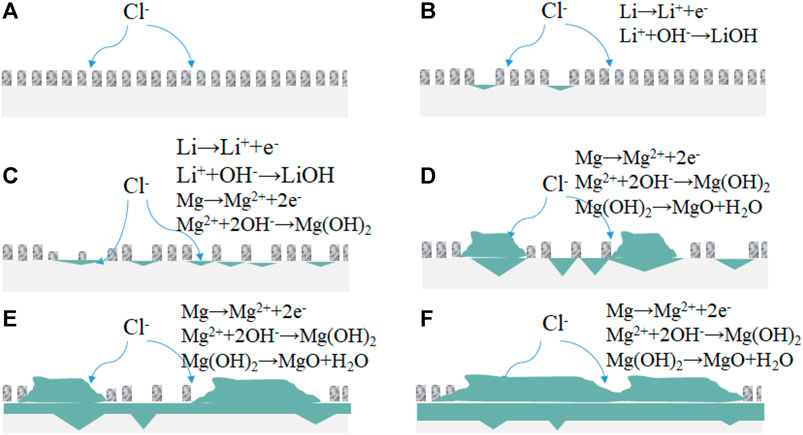 1) The corrosion of Mg-Li alloy with chemical oxidation film starts from pitting corrosion, gradually expands in depth in the early stage, forms corrosion holes, and then gradually develops into river-like morphology. In the last stage, the increasing corrosion products slow down the corrosion rate and gradually cover the entire sample surface.

2) The corrosion product is mainly consisted with MgO, LiF, and MgCl2.

3) The initial stage of corrosion initiation is mainly the formation of pits due to the electrochemical solution of Li. When the immersion continues, the element Mg happens as corrosion, and Li reacts further and dissolves off, leading to the pits expanding to corrosion holes. As the corrosion products accumulate on the surface of the specimen, the micro-electro-battery and dissolution effect are more obvious, and the corrosion is further intensified, and corrosion develops mainly towards horizontal.

Copyright © 2021 Wen, Bai, Zhao, Cui, Jiao, Wang and Zhang. This is an open-access article distributed under the terms of the Creative Commons Attribution License (CC BY). The use, distribution or reproduction in other forums is permitted, provided the original author(s) and the copyright owner(s) are credited and that the original publication in this journal is cited, in accordance with accepted academic practice. No use, distribution or reproduction is permitted which does not comply with these terms.

Corrosion and Protection of Magnesium Alloys