Perceived and actual social discrimination: the case of overweight and social inclusion

More than 1.4 billion adults, 20 and older, were overweight in 2008 (World Health Organization, 2012). Today, overweight and obese individuals face discrimination in almost every domain of living (cf. Puhl and Heuer, 2009; Schupp and Renner, 2011). Specifically, discrimination is pervasive in the social domain (e.g., not being included in social groups, others talking negatively about obese individuals; Sitton and Blanchard, 1995; Hebl and Xu, 2001; Puhl and Brownell, 2006), the economic domain (e.g., having difficulty in getting hired; cf. Carr and Friedman, 2005; Fikkan and Rothblum, 2005), and the physical domain (e.g., receiving less careful treatment from physicians; Hebl and Xu, 2001; Carr and Friedman, 2005). In contrast to widely recognized social stigmata, such as race or gender, there are no legal sanctions in place to protect individuals from obeseism. This fact is of particular concern as the prevalence of perceived obeseism has increased in recent years, and the growth is only partly explained by changes in obesity rates (Andreyeva et al., 2008). Thus, the degree of actual and perceived obeseism is of vital theoretical and practical interest.

In general, one way to investigate discrimination is to focus on the source of discrimination by capturing the perspective of the stigmatizing individual. In the realm of social discrimination, physicians reported that they would spend less interaction time with overweight patients than with normal weight patients (Hebl and Xu, 2001), and Sitton and Blanchard (1995) showed that fewer men responded to ostensible lonely hearts ad when the woman was described as overweight than when the woman had a history of drug addiction. That is, these studies assess the extent of self-reported or actual observed discrimination toward overweight individuals.

The present data were collected within a greater research project examining the antecedents and consequences of network formation and consolidation in a freshmen sample [Social Network Study (SozNet)]. Participants were psychology first-year students at the University of Konstanz, Germany. They were informed about the study and invited both during the introduction week and by email to participate in a study on “Social Networks.” The first measurement took place 1 week after the beginning of the semester. Participants filled in an online questionnaire every 2 weeks throughout their first semester providing information about themselves and their relationship to other first-year students. Data from the second measurement is missing due to technical problems during data collection. Thus, nine measurement points are available. As compensation for their participation participants received a 20 € book voucher, up to 5 h of course credit, and feedback on the study results.

All variables were assessed at all nine points of measurement unless otherwise indicated.

Perceived social inclusion was assessed through five questions (i.e., Williams et al., 2000; Eisenberger et al., 2007). In particular, participants were asked to rate their perceived degree of social inclusion while thinking about their fellow students from the previous week (for instance “Thinking of your fellow students last week, how much did you … … belong?, … feel integrated?”). Ratings were provided on 7-point rating scales (1 not at all–7 very much). On average, participants reported high social inclusion across the nine points of measurements (M = 5.46, SD = 0.95–1.06; α = 0.90).

Social preference. Participants nominated the three fellow students they “like most” (LM) and the three fellow students they “like least” (LL). LM- and LL-scores were computed for each participant by counting the nominations received for LM and LL nominations, respectively. Across all nine points of measurement, each participant was named on average 20 times (SD = 12.60) as most liked and 15 times (SD = 31.22) as least liked. LM- and LL-scores were standardized for each measurement point and used to generate social preference scores by calculating LM–LL (cf. Coie et al., 1982). Thus, the social preference-score reflects the likeability of students (Cillessen and Rose, 2005).

Gossip activity. Gossip is conceptualized as conversation about social and personal topics (Dunbar, 2004). To capture the gossip activity about a particular student, participants nominated those three fellow students about whom they would most likely hear interesting social news (“Über welche Person aus Ihrem Semester würden Sie am ehesten interessante Neuigkeiten erfahren?”; cf. Foster, 2003; McAndrew et al., 2007). Gossip activity scores were computed for each participant by counting the nominations received per point of measurement. On average, each participant was nominated 17 times (SD = 30.81) across the nine measurements. Thus, the gossip activity score reflects how much fellow students talked about a particular student.

Since observations were nested within persons, the data structure is hierarchical. Therefore, we used multilevel modeling (SPSS 20) to allow an assessment of average effects across individuals (fixed effects), taking into account that individuals vary around this average value (random intercept and slopes). Specifically, a two-level hierarchical model was calculated that assessed the fixed effects of social preference, gossip activity, BMI, and the respective interaction terms on perceived social inclusion. To control for time trends time was included as a predictor in the model. As we were interested in individual differences, both level 1 predictors (gossip activity and social preference) and level 2 predictors (BMI) were grand-mean centered. Time was centered at the first measurement point. To control for variability between individuals, the intercept and the slope of time were permitted to be random.

Multilevel modeling procedures of SPSS 20 support MI datasets and pool relevant statistics (e.g., bs and ps). However, with multilevel modeling df are not pooled. Therefore, the range of df for the multiple datasets is reported. To follow-up significant interaction terms and test simple slopes, we used a tool provided by Preacher et al. (2006).

In a first step, bivariate relationships between BMI and the two perspectives of social discrimination were assessed. BMI and mean perceived social inclusion were negatively correlated (r = −0.29, p = 0.01), showing that individuals with a higher BMI perceived themselves as being less socially included. Conversely, BMI and social preference were not significantly correlated (r = 0.10, p = 0.40), indicating that students with a higher BMI were neither less nor more liked by their fellow students. However, BMI and gossip activity (r = −0.29, p = 0.01) were negatively correlated, indicating that fellow students gossiped less about students with a higher BMI. 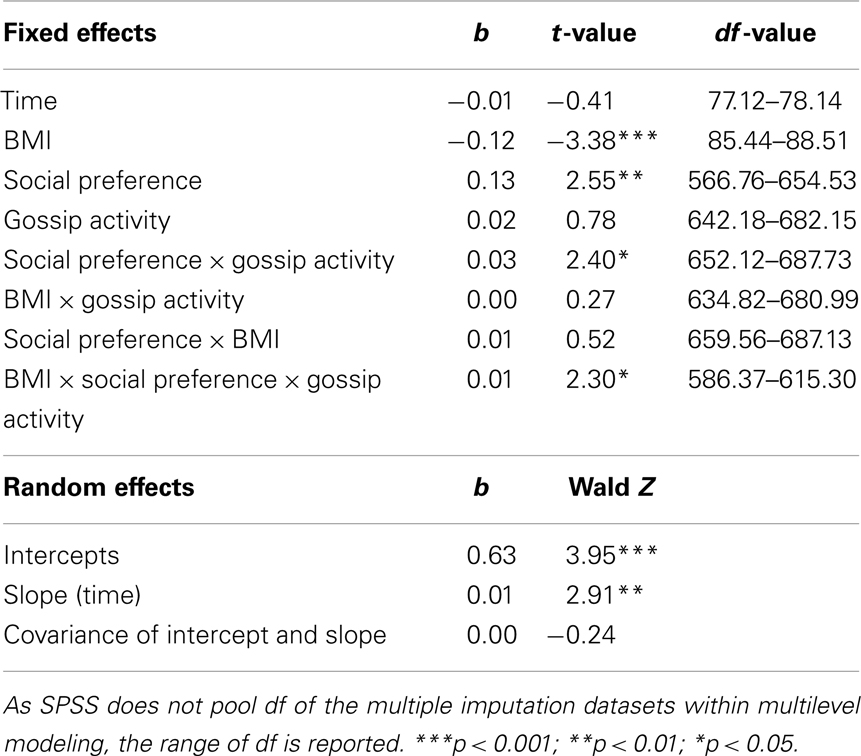 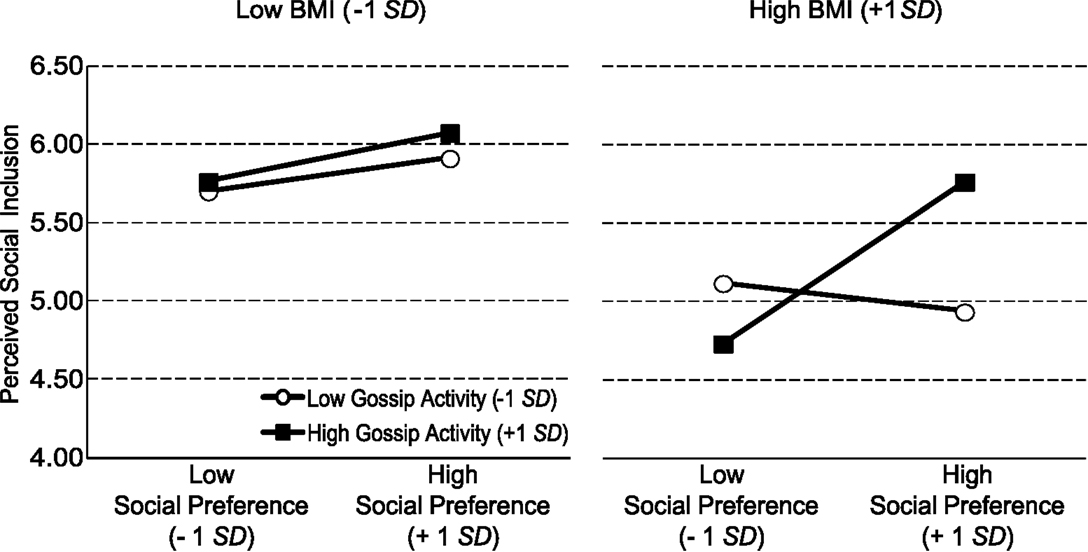 Interestingly, when not part of the social news and thereby deprived of relevant cues about their likeability, overweight individuals felt less socially included than non-overweight individuals. Research suggests that a history of discrimination or even simply knowing that one belongs to a stigmatized group (i.e., obese individuals) might establish a higher readiness to interpret ambiguous cues in the social environment as discriminatory (i.e., “zero-miss-strategy,” Feldman Barrett and Swim, 1998). Thus, in accordance with previous findings, these results suggest that the stigma of being overweight may affect the stigmatized individual even in the absence of actual discrimination (e.g., Steele and Aronson, 1995).

In combination with findings that “positive illusions” about the self have positive effects on psychological well-being (Taylor and Brown, 1988), one might speculate that the reduced psychological well-being of overweight individuals (Puhl and Heuer, 2009) is due on the one hand to more readily interpreting ambiguous situations as discriminatory and, on the other hand, a more accurate perception of their social environment.

Several limitations of the present research need to be acknowledged. Apart from the limitations that arise from the use of self-report measures and a non-representative sample (predominantly female and students), the study has limitations with regard to the generalization of the findings. In contrast to other discriminatory attributes, overweight is highly visible (Crocker et al., 1993), perceived as being at the responsibility of the individual (e.g., Weiner et al., 1988) and, additionally, no federal laws prohibit weight discrimination (e.g., Andreyeva et al., 2008; see also the German General Equal Treatment Law). Therefore, whether the present results can be generalized to invisible and/or uncontrollable discriminatory attributes remains open to further research. Another limitation is that the present study assessed gossip activity without taking the valence of the content into account. Since transmitted and perceived social information might affect actual and perceived social exclusion and discrimination differently, additional information regarding the content of gossip would be a promising avenue for future research.

We would like to thank the participants, Manja Vollmann, Daniela Garten, and Sebastian Nagler for their valuable assistance in conducting this study. This research was supported by the Committee on Research (AFF) of the University of Konstanz (02/11 granted to Freda-Marie Hartung and Britta Renner). Correspondence concerning this article should be addressed to Freda-Marie Hartung (freda-marie.hartung@uni-konstanz.de) or Britta Renner (britta.renner@uni-konstanz.de).

Copyright: © 2013 Hartung and Renner. This is an open-access article distributed under the terms of the Creative Commons Attribution License, which permits use, distribution and reproduction in other forums, provided the original authors and source are credited and subject to any copyright notices concerning any third-party graphics etc.