Acute aerobic exercise: an intervention for the selective visual attention and reading comprehension of low-income adolescents

The disparity in educational attainment between low- and high-income adolescents has widened by more than forty percent in the last 50 years (Reardon, 2013). Low-income adolescents fall behind their high-income peers on standardized tests across a variety of academic domains and on other educational attainment measures, including but not limited to grade point average, college enrollment, and college completion rates (Bailey and Dynarski, 2011; National Assessment of Educational Progress, 2014). In response, cognitive research has begun to focus on identifying cognitive processes that may underlie the income-achievement gap. For example, it has been determined that low-income students exhibit a variety of attention deficits compared to high-income students (e.g., Mezzacappa, 2004; Farah et al., 2005, 2006; Noble et al., 2005, 2007). Selective visual attention (SVA) is one specific attention deficit that has been identified among low-income students; it is the ability to remain focused on a relevant visual input while suppressing other irrelevant inputs (Mezzacappa, 2004; Hackman and Farah, 2009). Not surprisingly, SVA is critical for learning in any academic domain (Kruschke, 2005; Duncan et al., 2007; Rueda et al., 2010; Stevens and Bavelier, 2012). If a student cannot pay attention to information and ignore distractions during class, they will not be able to process the information and eventually retain it (Baddeley and Hitch, 1994; Kruschke, 2005).

It is important to acknowledge that interventions other than an acute session of aerobic exercise have been found to effectively improve the SVA of adolescents, but none have been conducted specifically with low-income adolescents. Moreover, the other interventions were particularly time consuming. For example, playing fast-paced action sports improved the SVA of middle- and high-income athletes; the more years an athlete played these sports, the larger the SVA gain they experienced (Nougier et al., 1996; Houmourtzoglou et al., 1998; Lum et al., 2002). However, a minimum of a year of participation in a fast-paced action sport was necessary to see an improvement. Playing action-based video games also improved middle-income adolescents’ SVA. When they played video games that required them to react to sudden appearances of stimuli among distractors, their performance on separate SVA tasks improved (e.g., Green and Bavelier, 2003; Feng et al., 2007; Hubert-Wallander et al., 2010). Yet, participants had to play the action-based video games every day for weeks at a time to experience the benefits. Participating in sessions of meditation improved SVA of middle-income adolescents, as well, but again participation had to be regular, frequent, and last for months (Jha et al., 2007; Slagter et al., 2007). While the success of these interventions underscores the malleability of SVA, they were time intensive. Time intensive interventions are not practical for practitioners to implement in low-income communities, as they are often limited by severe time and resource constraints. An acute session of aerobic exercise is ideal in that it requires only one session and the session is brief and low-cost.

Yet, the utility of an acute session of aerobic exercise as an intervention is contingent on the benefit lasting beyond the brief exercise session itself. Therefore, the second goal of the current study was to determine if the potential SVA benefits caused by acute aerobic exercise last 45-min after the exercise session ends. It was hypothesized that the SVA benefits would last 45-min for both high- and low-income participants. This hypothesis was based on previous research conducted with high-income participants that found that acute aerobic exercise improved cognitive control until the participants’ heart rates returned to within 10% of baseline, which took on average 48-min (Hillman et al., 2003). Cognitive control and SVA are both domain general executive functions and are positively correlated, making it seem likely that if an improvement in cognitive control lasted approximately 48-min after acute aerobic exercise, an improvement in SVA might also last for a similar duration (e.g., Yantis, 2008).

The materials and methods were approved by and conformed to the regulatory standards of the Committee for the Protection of Human Subjects, which is the Institutional Review Board of the institution where the data was collected.

Age, height, weight. The age (months), weight (lbs.), and height (in.) of each participant was self reported.

Resting heart rate. Participants sat still in a crossed-legged position with their eyes closed for 5-min. Then, their resting heart rate was measured with an Impact Sports Epulse Strapless Heart Rate Monitor.

The d2 Test of Attention was used as the SVA pretest, immediate posttest, and delayed posttest. The d2 Test of Attention is a one-page paper and pencil cancelation task of 14 rows (trials), each with 47 interspersed “p” and “d” characters (Brickenkamp and Zillmer, 1998). The characters have one to four dashes that are configured individually or in pairs above and/or below each letter. The target character is a “d” with two dashes (hence “d2”), regardless of whether the dashes appear both above the “d,” both below the “d,” or one above and one below the “d.” Thus, a “p” with one or two dashes and a “d” with more or less than two dashes are distracter characters. The task was to cross out as many target characters as possible, moving from left to right, with a time limit of 20 s per trial. No pauses were allowed between trials. The internal test-retest reliability of the d2 test has been shown to be very high for all parameters (0.95–0.98) and the criterion, construct, and predictive validity have been documented and shown to be strong and stable (Brickenkamp and Zillmer, 1998; Bates and Lemay, 2004). The test was scored using the following procedures, as suggested by the d2 Administration Manual (Brickenkamp and Zillmer, 1998). The total number of characters processed was calculated by summing the total number of characters that fell before the final (either correctly or incorrectly) crossed out character in each trial. Errors of omission were the total number of target characters (i.e., a “d” with two dashes) that were processed, but not crossed out across all 14 trials. Errors of commission were the total number of distractor characters (i.e., any character other than a “d” with two dashes) that were processed and incorrectly crossed out across all 14 trials. The total number of errors was calculated by summing the errors of omission and commission. Finally, the overall SVA score was calculated by subtracting the total number of errors from the total number of characters processed.

It was important to obtain information on the number and type of stressors in participants’ lives, as research has shown that it is the chronic stress of poverty that impacts cognitive processes (Evans and Schamberg, 2009). Therefore, an adaptation of the Stressful Life Events Schedule Survey (Williamson et al., 2003) was administered to all participants. On the survey, participants indicated if eighty different stressful life events had happened to them over the course of their life and, for each event that had, how much it affected them on a 4-point Likert scale ranging from “not at all” to “a lot.” Example items include: “My parent was fired from his/her job.”, “I was a victim of a crime.”, “A close friend or family member had health problems.”, “My parents divorced or separated.”, and “I had problems being liked by classmates.” A total life stress score was computed for each participant by summing the Likert scale rating for each event they indicated had happened to them.

The Participant Information Survey asked for self-reported data on each participant’s sex, race, ethnicity, and household income of the residence they grew up in for the majority of their childhood. For household income level, participants selected an income range that best reflected the household income level of the residence they grew up in for the majority of the childhood from nine income range choices. The nine income range choices reflected the nine income ranges used as eligibility guidelines set by U.S. Department of Agriculture for social services (U.S. Department of Agriculture, 2012). This survey was administered after all the other data was collected to avoid stereotype threat effects on the SVA measures, as stereotype threat effects have been shown to affect cognitive processing among young adults when primed about their gender, race, and economic circumstance (e.g., Steele and Aronson, 1995; Spencer and Castano, 2007; Good et al., 2008, respectively).

Instead of participating in a 12-min exercise session, participants in the control condition remained seated and viewed a 12-min educational movie clip about the benefits of aerobic exercise. Presenting both conditions with exercise related content was done in an effort to control for the possibility that simply thinking about aerobic exercise may impact one’s cognitive performance.

One minute after the 12-min exercise session or the 12-min film clip, participants completed the SVA immediate posttest. Then, participants in both conditions completed the reading comprehension task. Upon completion of the reading comprehension task, participants read silently to themselves. They had been asked to bring their own reading material with them to the lab and those who did not do so were provided with issues of Current Directions in Psychological Science and Nature. They read until 45-min had passed from the time they had completed the SVA immediate posttest. The primary purpose of the 45-min delay was to determine if a potential SVA benefit lasted at least 45-min. It also served the purpose of determining if any benefit lasted once one’s heart rate has returned to its resting heart rate (as recommended by Hillman et al., 2003 and Hillman et al., 2009). When 45-min had passed, participants were asked to check their heart rate to ensure that their heart rates were all within 10 beats per minute of their previously measured resting heart rate. Participants then completed the SVA delayed posttest. Finally, participants completed the Stress Inventory Survey and Participant Information Survey. They were thanked and compensated for their time. 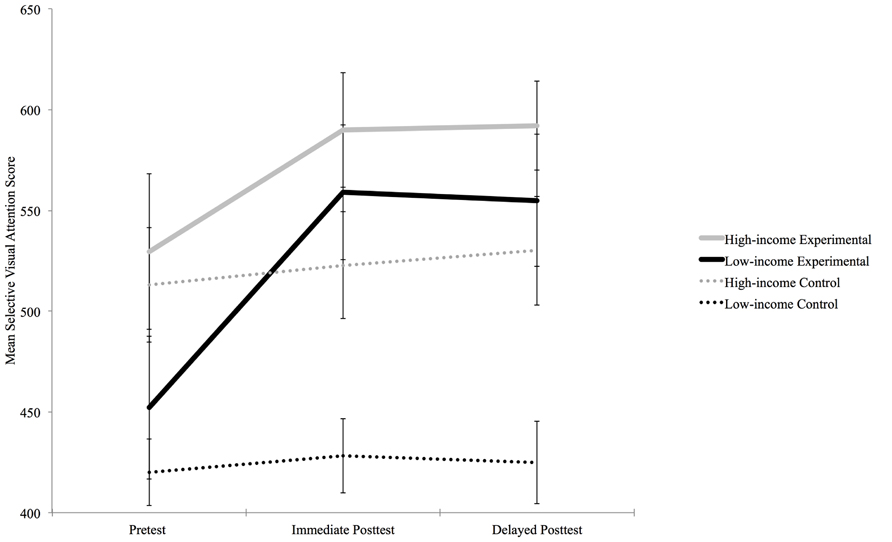 FIGURE 2. Reading comprehension as a function of exercise and income level.

Correlation analyses were also run to determine the relationship between reading comprehension scores and immediate posttest scores for different participant groups. A set of Fisher-X transformation tests determined if the correlations for different participant groups were significantly different from one another. The correlation between reading comprehensions scores and immediate posttest scores was statistically significant for low-income participants in both the experimental and control condition (p < 0.005 in both cases). This was not the case for high-income participants; the correlation between reading comprehension and immediate posttest scores was not statistically significant for high-income participants in the experimental or control condition (p > 0.05 in both cases). See Table 2 for correlation and Fisher’s Z-transformation statistics.

The current study has clear educational implications. In fact, the experimental condition was methodologically designed so that could be easily replicated in schools. For example, the only equipment needed that schools may not already have in inventory is a set of reasonably priced heart rate monitors. Also, a 12-min exercise session is brief enough to be realistically integrated into a typical school day. Physical education (PE) classes could intentionally be scheduled before academic classes. PE classes could also be required to include acute aerobic exercise, thereby allowing students to reap cognitive and academic benefits as well as the intended physical benefits. Unfortunately, instead of capitalizing on PE, there is a current decrease in the number of high schools offering PE and PE is rarely a required college requirement (National Association for Sport and Physical Education, 2010). Further, PE classes are being cut most often from schools in lower-income communities (National Association for Sport and Physical Education, 2010).

Copyright © 2014 Tine. This is an open-access article distributed under the terms of the Creative Commons Attribution License (CC BY). The use, distribution or reproduction in other forums is permitted, provided the original author(s) or licensor are credited and that the original publication in this journal is cited, in accordance with accepted academic practice. No use, distribution or reproduction is permitted which does not comply with these terms.