Although no direct evidence of facial attractiveness modulating temporal attention has emerged thus far, there is much evidence on the ways in which emotional pictures or facial expressions influence temporal attention. To assess the temporal aspects of visual attention, many studies have used a rapid serial visual presentation (RSVP) procedure (Broadbent and Broadbent, 1987; Raymond et al., 1992). In this procedure, a number of visual stimuli are successively presented at identical spatial locations, typically at a rate of about 10 items/s. Participants are asked to identify two specified visual targets that are placed within the stream of distractors. Typically, attention to a second target (T2) that follows within 200–500 ms after a first target (T1) is degraded is a phenomenon known as “attentional blink (AB)” (Raymond et al., 1992; Shapiro et al., 1997). Previously, AB has been demonstrated using face image stimuli (e.g., Landau and Bentin, 2008). As seen in a variety of stimuli (usually words or pictures), attending to a T1 face impairs T2 face detection within 500 ms. Several facial attributes have been shown to influence the AB, such as facial expressions (Fox et al., 2005; Vermeulen et al., 2009; Miyazawa and Iwasaki, 2010), familiarity (Gobbini et al., 2013), gaze direction (Ricciardelli et al., 2012), and facial distinctiveness (Ryu and Chaudhuri, 2007).

A number of studies have demonstrated the effect of emotional expressions on attentional processes, in what was thought to be a form of the emotional AB (EAB; Most et al., 2005). For instance, angry faces presented as T2 tend to be detected better than happy faces (an angry superiority effect; de Jong and Martens, 2007). In some other studies, happy faces are detected better than neutral and angry faces (Miyazawa and Iwasaki, 2010). When emotional faces were presented as T1, those with fearful expressions caused a stronger AB than disgusted faces (Vermeulen et al., 2009). Likewise, happy expressions produced a stronger AB effect relative to that of fear expressions in high-anxiety participants (Fox et al., 2005). These findings suggest that both positive and negative facial expressions modulate attentional processes. Besides facial expressions, personally familiar or distinctive faces attenuate AB when these faces serve as T2 (Ganis and Patnaik, 2009; Gobbini et al., 2013).

Despite these accumulating findings, no direct evidence has thus far been provided to support the hypothesis that facial attractiveness temporally modulates visual attention. Human beings might evolve discrete mechanisms for efficiently detecting attractive faces in evolutionary processes. In our social interactions, attractive faces may be represented as a class of important social signals, which have a strong motivational influence on pervasive social behavior. If attentional mechanisms prioritize cues of an attractive face because of its importance as biological signals, attractive faces are supposed to capture greater temporal attention as facial expressions does. The aim of this study was to investigate how spontaneous appraisal of facial attractiveness modulates temporal attention. To assess the temporal characteristics of visual attention, we used the dual task RSVP (dtRSVP) procedure, in which participants were asked to identify both T1 and T2 faces embedded in a stream of face image stimuli (e.g., Zappalà et al., 2013). Specifically, we manipulated facial attractiveness of T1 faces and examined the effect of attractiveness on AB, as well as the subsequent attentional modulation. According to Ciesielski et al. (2010), an emotionally salient stimulus disturbs a neutral T2 identification from 200 to 600 ms stimulus onset asynchrony (SOA), but facilitates T2 identification performance at 800 ms. This type of late enhancement effect is referred to as emotion-induced hypervision (Bocanegra and Zeelenberg, 2009). Given that attractive faces capture greater attentional resources, we expected that the presentation of an attractive face would hinder a subsequent target (T2) identification compared to a neutral or an unattractive face, when T2 follows within 500 ms. In addition, we predicted that T2 identification performance would be temporally improved following the presentation of an attractive face at a relatively late time point, as reported in previous studies (Bocanegra and Zeelenberg, 2009; Ciesielski et al., 2010). To ascertain that these attentional modulations should only be induced by facial attractiveness, we measured subjective facial distinctiveness which often negatively correlates with facial attractiveness (Langlois et al., 1994). Facial distinctiveness has been used as the index of prototypicality of the face, described in terms of deviation from the population average of all faces (Vokey and Read, 1992). Indeed, distinctive faces are shown to be better detected among distractors during RSVP (Ryu and Chaudhuri, 2007) and remembered better than typical faces (Shepherd et al., 1991). Considering that distinctive faces are associated with greater processing efficiency, it might be that facial distinctiveness affects the magnitude of AB and hypervision. Hence, we assessed both attractiveness and distinctiveness to test the unique effect of attractiveness on attentional processes.

Thirty-four adults (23 females; mean age, 21.2 ± 1.36 years) participated in the experiment. All participants had normal or corrected-to-normal vision and were naïve to the purpose of the study. They were individually tested in a soundproof room and paid 1000 Japanese yen for their participation. The study was approved by the local ethical committee of the Keio University, Japan. Before beginning the experiment, each participant provided informed consent and signed a written consent form.

The visual stimuli were presented on a 21-inch monitor (Trinitron CPD-G420, SONY) with a refresh rate of 100 Hz, and a screen resolution of 1280 × 960 pixels; stimuli were controlled by the MATLAB program (The Math Works, Natick, MA, USA) using a MacBook Pro (MacBook Pro, Apple). Participants sat at a viewing distance of 57 cm from the monitor. Head movement was restrained using a chin rest. In this experiment, 120 white British faces (60 females) were selected from the Glasgow Unfamiliar Face Database (http://homepages.abdn.ac.uk/m.burton/pages/gfmt/; Burton et al., 2010). All faces were viewed front-on, and were emotionally neutral. Face images were adjusted to be of approximately equal size (10.5° × 13.5° in visual angle). Images were converted to grayscale and normalized to have the same mean luminance and contrast; they were presented in the center of the screen against a gray background. In our preliminary experiment, a separate group of 29 participants (21 females) rated facial attractiveness of these 120 faces on a scale of one to six (1 = least attractive, 6 = most attractive). The mean attractiveness rating score was 2.64 ± 0.68 for male faces and 2.84 ± 0.75 for female faces.

(i) In the attractiveness rating task, participants were required to rate the attractiveness of 120 faces (60 female faces) on a visual analog scale (VAS) ranging from 0 (least attractive) to 1 (most attractive). In each trial, participants clicked a mouse button to initiate the presentation of a fixation cross (500 ms), followed by the face image. Participants were able to view the face until their response was made. They were required to keep in mind that the ratings were to be made by subjective but relative judgments, and that they should be able to use the entire range of the scale across all the faces. Participants completed two separate sessions according to the gender of the faces, in which the faces were presented in a random order. The order of the sessions (i.e., gender of the faces) was counter-balanced across participants.

(iii) In the dtRSVP task, participants were required to identify two female targets in a stream of face images presented in rapid succession (Broadbent and Broadbent, 1987). The presentation procedure is illustrated schematically in Figure 1. The dtRSVP stream began with a fixation cross that was presented for 500 ms in the center of the display. The fixation cross was followed by a rapid serial presentation of 16 face images on a gray background. In each trial, there were always two female target faces (namely, T1 for the first target, and T2 for the second target) within 14 male filler faces, each presented for 160 ms. T1 was placed fifth, sixth, or seventh in the 16 face presentation. T2 was placed second, fourth, or eighth after presentation of T1; that is, T2 was presented at lags of 2, 4, or 8 faces for T1. Accordingly, SOAs between T1 and T2 were 320 ms (Lag 2), 640 ms (Lag 4), and 1280 ms (Lag 8). In the dtRSVP task, T1 stimuli consisted of three attractiveness categories: attractive, neutral, and unattractive faces. Six faces were selected for each category, in accordance with scores by each participant in the attractiveness rating task. Mean attractiveness ratings were 0.79 ± 0.13 for attractive faces, 0.42 ± 0.11 for neutral faces, and 0.15 ± 0.11 for unattractive faces. Mean rating scores for attractive faces was significantly higher than for neutral and unattractive faces (p < 0.001 for both), and scores for neutral faces were significantly higher than for unattractive faces (p < 0.001). The T2 face was randomly selected from a pool of 42 female faces that were moderately attractive (M = 0.43 ± 0.10), but not presented as T1. The filler stimuli were randomly selected from a pool of male faces that were rated moderately attractive (M = 0.42 ± 0.11). Within a trial, the same filler stimulus was not repeated. At the end of each trial, participants were asked to identify T1 and T2 from each list containing the target face, and three distractor faces. If unsure, participants were encouraged to make their best guess. Eighteen trials were repeated for each unique lag and attractiveness category combination for an overall total of 162 trials. Trials were presented in random order. To familiarize participants with the experimental task, we started with 15 practice trials using face images never used in the dtRSVP task. 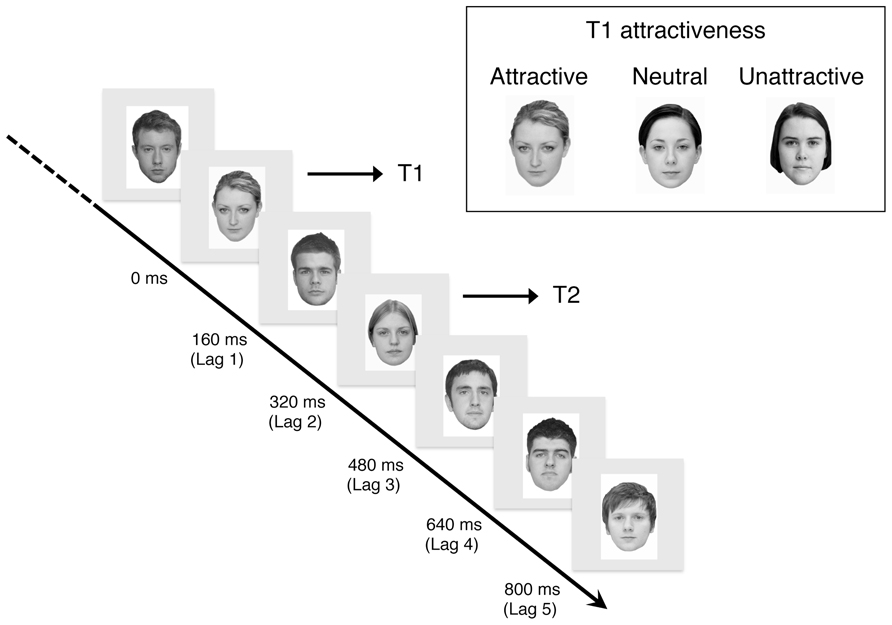 FIGURE 1. Schematic diagram of dtRSVP task. Note that T1 were attractive, neutral, or unattractive faces, while T2 were always neutral at 320, 640, and 800 ms time lags. 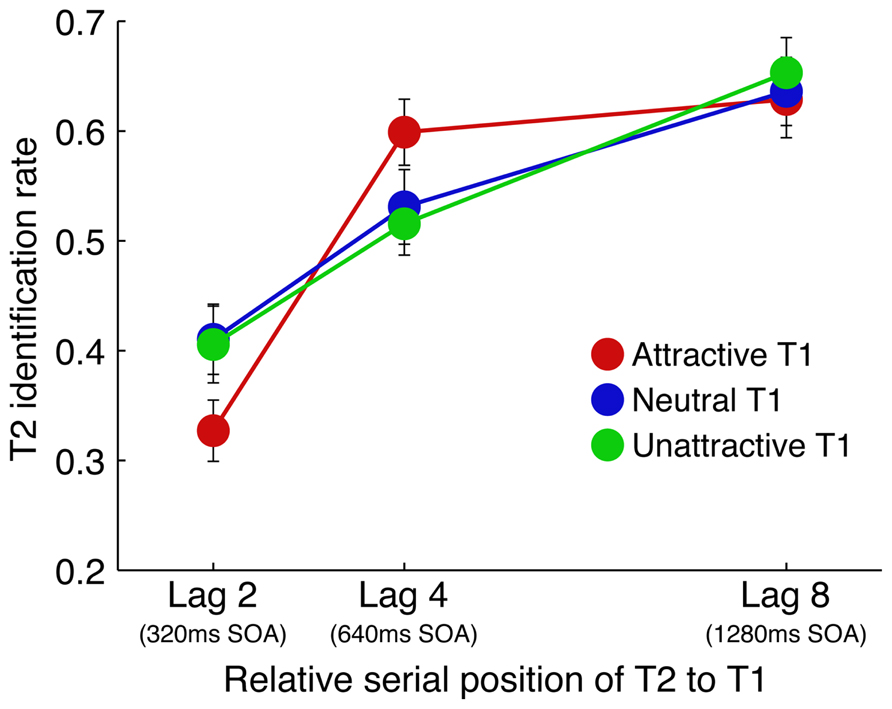 Effects of Attractiveness and Distinctiveness

To examine whether facial distinctiveness of T1 also has an effect on identifying T2, we computed a binary logistic regression equation (e.g., Monin, 2003) at each Lag for each participant, predicting whether T2 was identified or not (coded as 1 or 0) with preceding T1 attractiveness, T1 distinctiveness, and the product of these two variables capturing the interaction term. The coefficients from these binary logistic regressions were then entered as individual scores in a one-sample t-test. All unstandardized partial coefficients are shown in Table 1. As shown in Table 1, the effect of neither T1 attractiveness [t(32) = 1.13, p = 0.26, d = 0.19] nor distinctiveness [t(32) = 1.31, p = 0.20, d = 0.22] was statistically significant at Lag 2. However, the interaction coefficient was significantly lower than zero [t(32) = -4.02, p < 0.05, d = 0.38], suggesting that T2 identification was impaired via an interaction effect of T1 attractiveness and distinctiveness.

At later a time point in T2 (i.e., Lag 4), the identification rate was improved following attractive T1 faces compared to unattractive ones. This shows the enhancement effect on T2 identification performance bestowed by attractive faces in T1. Moreover, we confirmed that facial attractiveness, but not distinctiveness, could contribute to the temporal perceptual facilitation (see Table 1). This pattern is in agreement with previous studies demonstrating emotion-induced hypervision (Bocanegra and Zeelenberg, 2009; Ciesielski et al., 2010). Ciesielski et al. (2010) reported that T2 identification performance in RSVP is moderately improved at around 800 ms SOA, when emotionally salient stimuli were presented as T1 relative to neutral stimuli. Furthermore, attractive faces might have a beneficial effect on T2 identification at a later time point, whereas it has a detrimental effect on T2 identification at the early time point. This kind of beneficial effect should be distinguished from a disengagement of temporal attention. This pattern was not observed at Lag 8 (1280 ms SOA) in this study.

This work was supported by Japan Society for the Promotion Science (KAKENHI 2468029).

Copyright © 2014 Nakamura and Kawabata. This is an open-access article distributed under the terms of the Creative Commons Attribution License (CC BY). The use, distribution or reproduction in other forums is permitted, provided the original author(s) or licensor are credited and that the original publication in this journal is cited, in accordance with accepted academic practice. No use, distribution or reproduction is permitted which does not comply with these terms.