A regulatory focus perspective on eating behavior: how prevention and promotion focus relates to emotional, external, and restrained eating

By applying regulatory focus theory (RFT) to the context of eating behavior, the present research examines the relations between individual differences in the two motivational orientations as conceptualized in RFT, that is, prevention-focused and promotion-focused self-regulation and emotional, external, and restrained eating. Building on a representative study conducted in the Netherlands (N = 4,230), it is documented that individual differences in prevention focus are positively related to emotional eating whereas negligible associations are found in regards to external and restrained eating. Individual differences in promotion focus are positively related to external eating whereas negligible associations are found in regards to emotional and restrained eating. In relating RFT to different eating styles we were able to document significant relations of basic self-regulatory orientations with regard to essential daily behavior associated with health and well-being. The implications for changing eating styles are discussed.

Humans differ substantially in terms of eating behavior. For instance, when having experienced negative events some individuals use eating as a strategy to cope with their negative emotions (Macht, 1999; Macht and Simons, 2000). Humans also differ in terms of how much they feel like eating when confronted with food that smells and looks good (Wardle, 1987). Additionally, some individuals have a strong focus on regulating food intake to control body weight (Van Strien et al., 1986). Basically, humans differ regarding both what they eat and how they eat (Young, 1941; Epstein et al., 2007) according to three central dimensions of eating behavior: (a) eating after experiencing negative emotions (i.e., emotional eating, also termed emotional food craving; Hill et al., 1991; Craeynest et al., 2008), (b) eating in response to positive external stimuli such as the smell, taste, and appearance of food (i.e., external eating), and (c) deliberately regulating food intake to control body weight (i.e., restrained eating; Van Strien et al., 1986).

Given that different eating styles are related to important health-related factors such as weight gain and obesity (e.g., Wilson, 1986; Snoek et al., 2007; Baños et al., 2014) it is essential to know who engages in what kind of eating styles. Prior research has linked different eating styles to personality dimensions (e.g., Heaven et al., 2001). However, different eating styles have not been analyzed from the perspective of individual differences in self-regulation as conceptualized by a prominent motivational approach: regulatory focus theory (RFT; Higgins, 1997, 1998). In the present contribution, we relate emotional, external, and restrained eating to individual differences in prevention- and promotion-focused self-regulation. In fact, with regard to practical interventions it seems important to know who engages in health-related eating styles, for instance whether emotional eating is likely to be executed by prevention-focused individuals. On this basis one can tailor interventions to fit individuals’ basic self-regulatory orientations. We elaborate on this opportunity in the general discussion.

Human beings (consciously and/or unconsciously) modify and adjust their own habits or actual states to bring these into alignment with a positive standard (e.g., a specific goal in life; Vohs and Schmeichel, 2003; Vohs and Baumeister, 2004). RFT (Higgins, 1997, 1998, 2012a; Scholer and Higgins, 2008, 2011) proposes that it is necessary to differentiate between specific standards (i.e., what is perceived as positive standard) as well as between specific preferred strategies in terms of how positively evaluated standards are approached and how negatively evaluated standards are avoided. Here, RFT proposes two distinct regulatory systems: a prevention-focused orientation and a promotion-focused orientation (Higgins, 1997, 1998, 2012a; Scholer and Higgins, 2008, 2011). The two basic motivational orientations of prevention focus and promotion focus represent the systems that include the strategies for how individuals approach pleasure and avoid pain. In other words, how individuals generally self-regulate movements toward goals. Prevention-focused individuals typically prefer avoidance strategies in goal striving whereas promotion-focused individuals typically prefer approach strategies (Scholer and Higgins, 2008, 2011; Higgins, 2012b)1.

In the context of eating behavior, Florack et al. (2013) have shown that prevention-focused (vs. promotion-focused) individuals ensure appropriate eating behavior by following the eating behavior of others2. In another study it was found that prevention-focused individuals consumed more fruits associated with health precautions than associated with benefits (Spiegel et al., 2004). Joireman et al. (2012) documented that the more promotion-focused an individual was the more likely they were to report eating healthily in order to feel good. Recently, Pula et al. (2014) examined the relations of regulatory focus and food choice motives, showing that the prevention focus is associated with emphasizing mood, convenience, and familiarity. However, the relations between specific eating styles and chronic prevention and promotion focus have not been examined before. Therefore, we now outline in detail how different eating styles, in particular emotional, restrained, and external eating, are expected to be related to prevention and promotion focus.

External eating represents eating in response to positive external stimuli such as the smell, taste, and appearance of food. In short, external eating does not reflect a coping strategy for negative emotions (as emotional eating does) but rather an approach to attractive food when it is present that may result in over-eating (Van Strien et al., 2009). Building on the notion that external eating can be conceptualized as an approach strategy to attain positive external stimuli (i.e., favorable food), and promotion-focused individuals are typically sensitive to positive stimuli, and use approach strategies to ensure their wishes (Scholer and Higgins, 2008, 2011; Higgins, 2012b), we assume that promotion-focused individuals are more likely than others to engage in external eating. That is, a positive association between individual differences in promotion focus and external eating is expected.

The study involves a representative study (the LISS panel) conducted in the Netherlands (N = 4,230; Mage = 52.29; 53.4% women). In this study, we took advantage of the panel-character of the LISS panel which allows the merging of several waves of the panel. In February 2011, individual differences in prevention and promotion focus were assessed; in July 2010, The Dutch Eating Behavior Questionnaire (Van Strien et al., 1986) was utilized to measure emotional, external, and restrained eating. Alpha reliabilities, means, and standard deviations are displayed in Table 1.

Chronic self-regulatory orientations were assessed using a Dutch version of the regulatory focus scale (RFS) developed by Lockwood et al. (2002). A sample item of the 9-item prevention focus subscale reads: “In general, I am focused on preventing negative events in my life.” A sample item of the 9-item promotion focus subscale reads: “I frequently imagine how I will achieve my hopes and aspirations.” The scale endpoints of the items were labeled “1” (not at all true) and “7” (completely true).

The LISS panel also includes a self-report of height and weight on the basis of which participants’ BMI was calculated. BMI was included because of its associations with different eating styles (e.g., Baños et al., 2014) and to show relations of regulatory focus and eating styles beyond BMI. 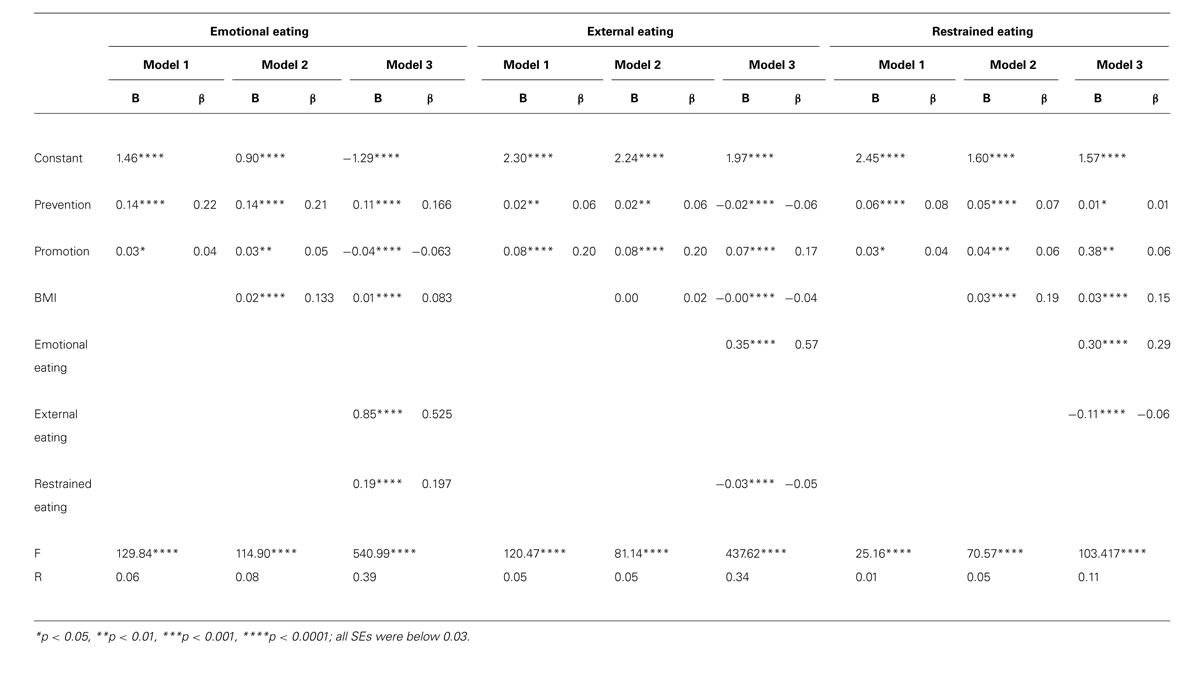 In relating RFT to different eating styles we were able to document significant relations of basic self-regulatory orientations with essential daily behavior associated with health and well-being (Van Strien et al., 1986; Wilson, 1986; Snoek et al., 2007; Alberts et al., 2012; Baños et al., 2014). Specifically, the present work examined the relation between different eating styles, in particular emotional, external eating, and restrained eating and prevention-focused and promotion-focused self-regulation. Analyses revealed that individual differences in prevention focus were positively related to emotional eating. In this regard, a medium effect size was found (Cohen, 1988). That is to say, the more individuals are chronically prevention-focused the more they use emotional eating to cope with negative emotions and events. Moreover, individual differences in promotion focus were positively related to external eating. Here, a medium effect size was found, too (Cohen, 1988). This strengthened the assumption that external eating reflects an approach type of behavior – behavior that is executed in particular by promotion-focused individuals. Regarding restrained eating, negligible associations with prevention and promotion focus are found. In sum, the present research contributes to the field of self-regulation, specifically to research on regulatory focus and extends existing knowledge about how basic motivation orientations as conceptualized in RFT relate to eating behavior (Spiegel et al., 2004; Joireman et al., 2012; Florack et al., 2013).

In critically reflecting upon the present work, we point to the fact that the reported data is of a correlational nature. Consequently, causation should not be assumed. Meanwhile, different directions of the observed correlations could be possible, for instance that prevention focus is the result and not the cause of emotional eating. That is to say, after engaging in emotional eating individuals may use vigilant, prevention-focused strategies to deal with the negative event of emotional eating which may have included over-eating and food cravings for unhealthy food.

Going back to the theoretical approach of RFT, the two modes of self-regulation (prevention and promotion) have been conceptualized as distinct orientations (Higgins, 1997, 2012a). Thus, prevention-focused self-regulation does not represent the opposite of promotion-focused self-regulation. This suggests that one of the two orientations can be associated with a certain construct whereas the other orientation is not, which is precisely what was found. Prevention focus predicted emotional eating whereas no substantial relation was found with promotion focus. Congruently, promotion focus predicted external eating while prevention focus was not substantially related to this eating style. That is to say, the present findings are in line with the distinctness assumption of RFT as documented in other research (e.g., Scholer et al., 2010; Keller and Pfattheicher, 2011).

Another possibility to change eating styles is offered by Evers et al. (2010) and Alberts et al. (2012). Alberts et al. (2012) reduced vigilant avoidance strategies through the use of a mindfulness intervention. Mindfulness fosters the acceptance of a current (negative) state thus reducing vigilance and avoidant goal striving. Results show that being mindful reduces food cravings when experiencing negative emotions, that is, mindfulness leads to less emotional eating (see also Alberts et al., 2010). Other work by Evers et al. (2010) shows that reappraisal rather than maladaptive suppression of negative emotions leads to less emotional eating. In sum, these studies show that reducing the vigilant avoidance system leads to less emotional eating. Building on our research, one could expect that these interventions would be particularly effective for individuals who actually use vigilant avoidance strategies (i.e., prevention-focused individuals). As such, mindfulness training and interventions to reappraise negative emotions can be especially useful for chronically prevention-focused individuals to regulate their food cravings.

To conclude, the present work reflects a fruitful approach for future research examining the impact of self-regulatory orientations on emotional, restrained, and external eating. As such, the present work provides new impulses for the design of effective interventions aiming at reducing maladaptive eating styles.

Copyright © 2014 Pfattheicher and Sassenrath. This is an open-access article distributed under the terms of the Creative Commons Attribution License (CC BY). The use, distribution or reproduction in other forums is permitted, provided the original author(s) or licensor are credited and that the original publication in this journal is cited, in accordance with accepted academic practice. No use, distribution or reproduction is permitted which does not comply with these terms.