Asymmetry in frontal electrical activity has been reported to be associated with positive mood. One form of mindfulness meditation, integrative body-mind training (IBMT) improves positive mood and neuroplasticity. The purpose of this study is to determine whether short-term IBMT improves mood and induces frontal asymmetry. This study showed that 5-days (30-min per day) IBMT significantly enhanced cerebral blood flow (CBF) in subgenual/adjacent ventral anterior cingulate cortex (ACC), medial prefrontal cortex and insula. The results showed that both IBMT and relaxation training increased left laterality of CBF, but only IBMT improved CBF in left ACC and insula, critical brain areas in self-regulation.

Since late 1970s, frontal EEG asymmetry has had widespread use in measuring individual differences in emotional state. In general, it is believed a left-sided frontal activation indicates a positive emotion, although the evidence is not always consistent with this view (Allen and Kline, 2004; Allen et al., 2004; Cacioppo, 2004; Travis and Arenander, 2004, 2006).

A number of EEG studies have examined the relationship between meditation and frontal asymmetry (Davidson et al., 2003; Moyer et al., 2011). For example, 8-weeks mindfulness-based stress reduction, in comparison to a wait-list control, increased left-sided lateralization of alpha power and decreased negative affect (Davidson et al., 2003). Another study suggested 5-weeks of meditation shifts EEG asymmetry toward a pattern associated with positive emotion compared to a waiting-list control although there was no significant difference between the two groups (Moyer et al., 2011).

However, previous studies have used EEG with low spatial resolution and have not involved an active control group. To our knowledge, only one single photon emission computed tomography (SPECT) imaging study reported a marginal significant left frontal asymmetry of cerebral blood flow (CBF) but this study involved a sample of 12 long-term meditators compared to normal controls (Newberg et al., 2010) and was not a randomized test with an active control. Thus, we set out to apply brain imaging to investigate the CBF asymmetry induced by short-term training in a relatively large sample of 40 undergraduates with a random assignment to IBMT or relaxation training groups. We hypothesize that IBMT could improve left frontal CBF at resting state, which may underlie the promotion of positive emotion.

Forty right-handed Chinese undergraduates at Dalian University of Technology without any training experience and a history of psychiatric or neurological conditions were recruited. They were randomly assigned to IBMT or relaxation group (20:20 each group, age = 22.75 ± 2.02), a brief self-report mood scale, similar to short form of Positive and Negative Affect Schedule (PANAS) was used to measure positive (PA) and negative affect (NA; Moyer et al., 2011; Ding et al., 2014). A written informed consent was obtained and local IRB approved the study.

Participants received 30-min of IBMT or relaxation training from Monday through Friday, with a total of 2.5 h training. IBMT involves body relaxation, mental imagery, and mindfulness training, guided by an IBMT coach and compact disk. Cooperation between the body and the mind is emphasized in facilitating and achieving a meditative state. The trainees concentrated on achieving a balanced state of body and mind. The method stresses no effort to control thoughts, but instead a state of restful alertness that allows a high degree of awareness of body, mind, and external instructions (Tang et al., 2007, 2010; Tang, 2011). Relaxation training involves the relaxing of different muscle groups over the face, head, shoulders, arms, legs, chest, back, and abdomen, etc., guided by a tutor and compact disk. With eyes closed and in a sequential pattern, one is forced to concentrate on the sensation of relaxation such as the feelings of warmth and heaviness. This progressive training helps the participant achieve physical and mental relaxation and calmness (Tang et al., 2007, 2010).

Single photon emission computed tomography neuroimaging data were acquired on a double head detector of GE HAWK EYE SPECT system (Millenium VG, GE Healthcare) from all participants before and after a 5-days IBMT or relaxation training. Participants were instructed to stay in a quiet dark room with eyes closed and ears unoccluded for 10 min, and then they were injected with 25 mCi of 99mTc-ECD. Approximately 20 min following the injection, participants were scanned by SPECT system for 30 min (Tang et al., 2009; Newberg et al., 2010). Two different statistical methods were used to estimate CBF before and after training.

Statistical parametric mapping (SPM1) was applied to evaluate whole brain CBF differences between these two groups. All images were normalized to the SPECT template in SPM, and then 8 mm Gaussian kernel was used to smooth these images. Two groups’ data were compared using two sample t-test with ANCOVA for removing global effect. The significance threshold was set at p < 0.001 (Tang et al., 2009; Newberg et al., 2010). The location and peaks of activation was identified by xjview2.

Consistent with our previous studies (Tang et al., 2007; Ding et al., 2014), no significant difference in mood was detected before training between two groups (p > 0.05). After training, the IBMT group showed significantly better scores in positive and negative affect in comparison with the RT group; IBMT group (not RT) also showed significant post vs. pre difference in PN and NA (all p < 0.05). These results suggested that short-term IBMT induced higher positive mood and lower negative mood states than relaxation training. However there was no significant time by group interaction.

There were no significant differences in before vs. after laterality scores in frontal areas between the two groups. Instead, both groups showed significant differences favoring the left hemisphere in tIFG (triangular part of inferior frontal gyrus, p = 0.033) and oSFG (orbital part of superior frontal gyrus, p = 0.045) as shown in Figure 1. The IBMT group revealed larger laterality indexes that implied greater left frontal CBF lateralization, compared to relaxation group after training, but the group × session interaction was not significant. 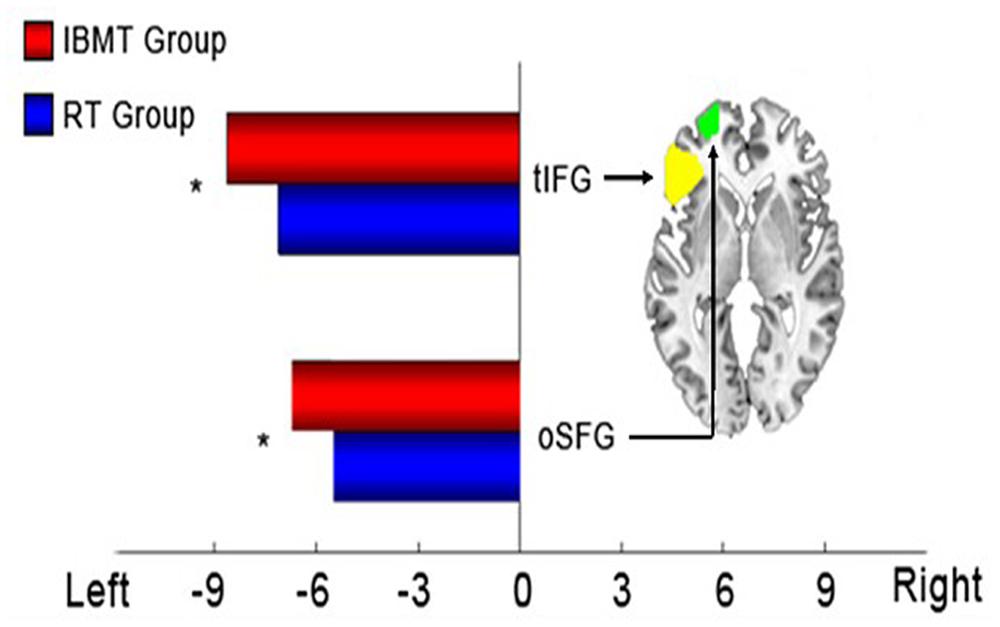 Our study, using the frontal asymmetry analysis, indicated only a few hours of training increases left-sided CBF asymmetry in both groups but IBMT’s increase is greater than that of relaxation training.

In previous studies meditation training promoted positive emotions and degraded negative affect (Kabat-Zinn et al., 1992; Tang et al., 2007; Ding et al., 2014) Studies have found 8-weeks mindfulness meditation produced EEG frontal asymmetry and reduced negative mood state (Davidson et al., 2003). In our previous study of 80 Chinese undergraduates, a few hours of IBMT improved positive moods using a 65-item Profile of Mood States (POMS; Tang et al., 2007, 2009; Newberg et al., 2010; Tang, 2011). The current study did not repeat the POMS measures, instead, a brief self-report positive and negative mood scale was used before and after training (Moyer et al., 2011; Ding et al., 2014). After training a significant between-group differences were observed and IBMT group performed better in mood states than relaxation group. However, we did not find a significant difference in the group by time of testing interaction in mood. It is likely that that the brief measure of mood was not as sensitive as the POMS. These findings could also be due to power considerations and sensitivity of imaging techniques (Gatzke-Kopp et al., 2001), but with 20 participants per group our study has a larger number than most imaging studies.

Although studies have shown mindfulness meditation increased left-sided anterior activation, a pattern previously associated with positive affect (Davidson et al., 2003; Moyer et al., 2011) comparing to a wait-list control group, alternation of EEG frontal asymmetry was not detected during transcendental meditation, but the participants’ emotion states were improved (Travis and Arenander, 2004, 2006). Given the low spatial resolution of EEG, it remains to be elusive whether the brain regions involved in these studies are the same. In our study both meditation and relaxation resulted in increased left lateralization, but only IBMT changed mood and brain activity in ACC and insula associated with self-control, consistent with our series of research (Tang et al., 2007, 2009, 2010). Since we did not detect the significant correlation between frontal asymmetry and mood using EEG, future studies will be needed to demonstrate the mechanisms of changes in frontal asymmetry and mood state using ERP/fMRI fusion approach.

Our study shows that few hours of IBMT increases resting CBF in specific brain areas often shown to be involved in attention and self-regulation (Posner and Rothbart, 2006; Tang et al., 2009, 2010; Hölzel et al., 2011; Tang, 2011). However, both IBMT and relaxation training increase frontal asymmetry significantly, although IBMT has a somewhat larger increase. The IBMT group has better overall mood state following training, but it is not clear if the brain differences found in this study are the cause of the changes in affect and mood.

We thank the staff of the Institute of Neuroinformatics for data collection. This work was supported by the Office of Naval Research.

Copyright © 2015 Tang, Lu, Feng, Tang and Posner. This is an open-access article distributed under the terms of the Creative Commons Attribution License (CC BY). The use, distribution or reproduction in other forums is permitted, provided the original author(s) or licensor are credited and that the original publication in this journal is cited, in accordance with accepted academic practice. No use, distribution or reproduction is permitted which does not comply with these terms.

Neuroimaging and Neuropsychology of Meditation states