The Acute Relationships Between Affect, Physical Feeling States, and Physical Activity in Daily Life: A Review of Current Evidence

Despite the health-promoting effects of physical activity (Penedo and Dahn, 2005), most individuals are physically inactive in their daily lives (Bauman et al., 2011). A large body of research has suggested that physical activity can boost emotional well-being (i.e., the “feel good” effect; Reed and Ones, 2006). Several behavioral theories have suggested that individuals will engage in behaviors that provide pleasure (e.g., Bentham, 1962), or from which they anticipate a positive affective response (e.g., Mellers, 2000). Accordingly, people would be expected to engage in continued physical activity over time if they experienced a boost in positive affect but to exercise less across time if negative affect resulted. Yet, research is lacking on the extent to which these pleasure theories underlie individual motivations to engage in daily physical activity.

Previous studies on this topic usually use a variety of terms such as “affect,” “emotion,” and “mood” to describe people’s psychological experience. While psychologists have distinct definitions for each of these term (e.g., “emotion” is considered to be a more generic term than “affect” since it could include other attributes such as physiological changes; Lazarus, 1991), researchers from other fields (e.g., behavioral science and public health) sometimes use these words interchangeably. In addition, some physical activity researchers use the term “physical feeling states” to capture sensory experiences such as energy and fatigue that may be distinct from positive/negative affective states (Dunton et al., 2014). For this review, all terms used to describe the immediate emotional states that a person feels at any given moment were included, and were hereafter referred to as either “affective states” or “physical feeling states” to reflect their momentary nature.

Literature searches were conducted for articles that were published in English using Medline, PsycINFO, and Google Scholar. Articles published prior to November 2, 2015 were included. The following keyword combinations were used: Physical Activity or Exercise and Mood or Emotion or Affect (see Supplementary Table S1 for sample full search strategy used for OVID Medline). Titles and abstracts identified through the search process were reviewed to identify relevant articles.

The data extraction procedure involved two stages. First, a coding form was developed for general data extraction to identify study characteristics including source, participants, methods, and results. Second, risk of bias assessment for each study was performed based on four domains including selection bias, confounders, data collection methods, and withdrawals and drop-outs, adapted after the Quality Assessment Tool for Quantitative Studies (National Collaborating Centre for Methods and Tools, 2008). Two reviewers performed the data extraction procedure independently. All discrepancies between reviewer’s ratings were resolved through discussions that led to a consensus.

Table 1 summarizes the general characteristics of the 14 included studies. A majority of the studies (N = 12) utilized an experience sampling or Ecological Momentary Assessment (EMA) method (for more details about these two methods, see papers by Scollon et al., 2003; Shiffman et al., 2008, and Ebner-Priemer and Trull, 2009). Among these studies, 9 used electronic devices (e.g., a PDA) to deliver surveys and collect responses, and the other three used paper-pencil surveys with beepers to signal alerts. Only 6 studies used an objective measure (i.e., accelerometer) of physical activity. Seven studies used a self-reported physical activity instrument. One used gym attendance (based on a computerized scan of membership card for gym entry) as a proxy for physical activity and cross-checked with self-reported exercise tracking forms. 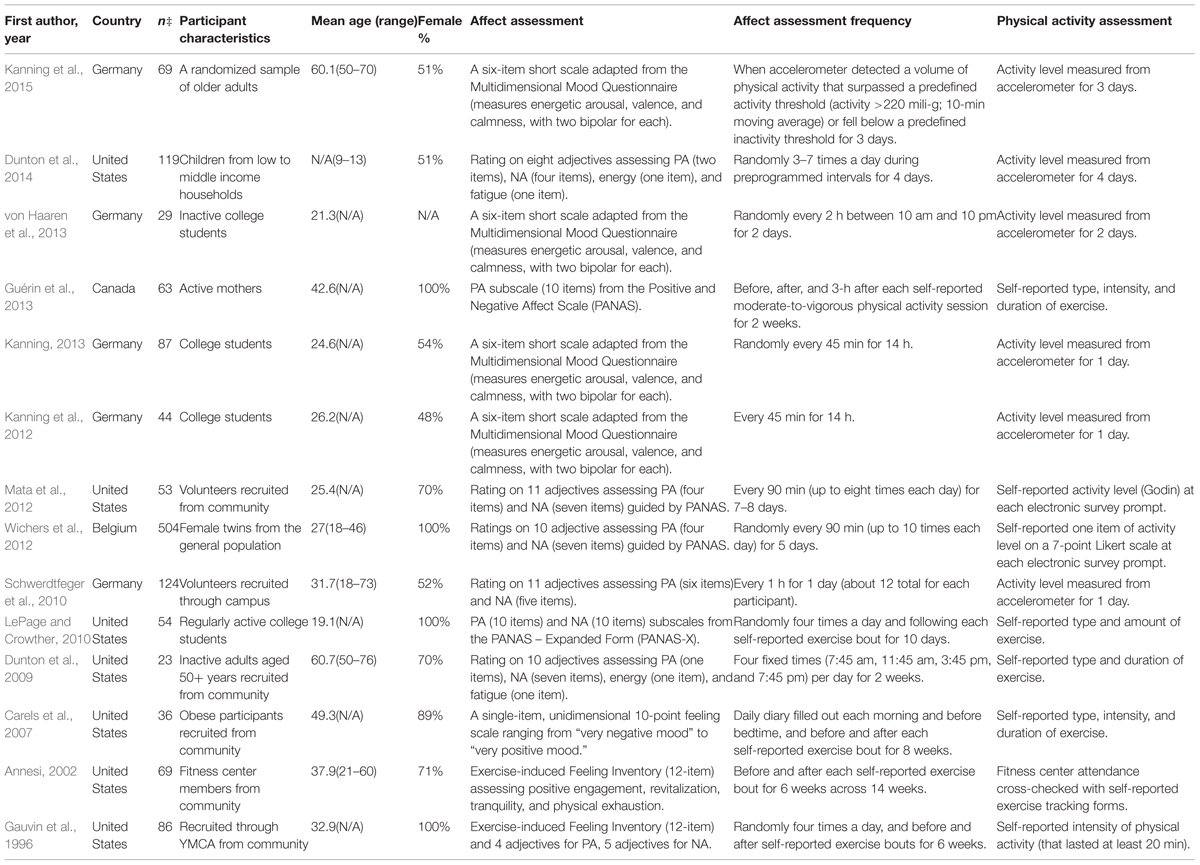 Table 2 shows the results of the quality assessment for each study. Selection bias was generally high (rating of weak) since most studies used convenience samples (e.g., college students) instead of randomly selected participants from the general population (only one study recruited this way). All studies used appropriate statistical methods (e.g., multilevel modeling) to control for clustering within individuals and some studies additionally controlled for other within-person confounding variables. Data collection methods were rated for both affect and physical activity assessment, and one studies received a weak rating due to the use of unestablished assessment tools. Three studies received a weak rating on withdrawals since they did not report any information regarding study drop-outs or missing data. Overall, three studies received a strong global rating and three studies received a weak global rating. The present review used a modified version of Quality Assessment Tool for Quantitative Studies to assess study quality across all included studies, which addressed aspects (e.g., selection bias, data collection methods, withdrawals/missing data) that could be important for future studies to consider when investigating the acute relationships between affective and physical feeling states and physical activity in free-living settings. First, most of the reviewed studies used a convenience sample (e.g., undergraduate students from a Psychology class). Therefore, findings from these studies might not be representative of the general population, or high-risk populations for physical inactivity. Future studies on this topic would be strengthened by recruiting more representative (e.g., diverse age, ethnicity, and socioeconomic background) study participants from community-based samples.

Secondly, only six studies used both an electronic device to deliver and record momentary mood assessment, and an accelerometer to measure physical activity levels; which is considered as the highest methodological standard to use for investigating within-person associations between momentary affective states and physical activity in everyday lives (see the position statement by Kanning et al., 2013). Further, in order to capture a more representative sample of people’s behaviors, the total monitoring period should also be longer (e.g., more than 1 day).

Finally, none of the reviewed studies that used electronic devices provided information regarding level of data loss or missing data. As reported by Dunton et al. (2012), missing data from EMA could be due to non-compliance (i.e., non-response or non-wear) by the participants, or could be due to technical problems with the devices (e.g., device lost/damage, battery drain, app failed to initiate). A better understanding of the reasons for data loss could provide important insights for future studies that may want to adopt technology-based devices (e.g., whether researchers should put more effort into ensuring participant compliance or enhance device reliability). Therefore, when reporting results, researchers should consider providing such information.

Further, intensity and duration of physical activity may influence the affective responses to physical activity (e.g., the dual-mode model; Ekkekakis, 2005). However, research in this area has mainly been performed in controlled laboratory settings. Only two of the reviewed studies examined the role of perceived intensity and both found that higher intensity activities led to a greater increase in positive affect afterwards (Carels et al., 2007; Guérin et al., 2013). In addition, since sedentary behavior is associated with increased risks of metabolic syndrome and cardiovascular disease (Edwardson et al., 2012; Wilmot et al., 2012); and there are studies demonstrating the metabolic-health benefits from breaks in sedentary time (e.g., some light activity in-between sedentary time; Owen et al., 2010). It would be also be a promising direction to examine how reduced sedentary time may affect affective states in future studies.

Lastly, although observational studies carried out in free-living settings have the strengths of demonstrating ecological validity and temporal precedence of the associations between affective states and physical activity, these studies are limited in their ability to draw causal conclusions. Future studies should seek out methods to test these associations using experimentally based approaches such as randomly assigning individuals to affect or activity conditions and measuring subsequent free-living behavior.

The authors would like to thank Dr. Luanne Rohrbach from Department of Preventive Medicine at the University of Southern California for her comments on the preliminary version of this manuscript.

The Supplementary Material for this article can be found online at: https://www.frontiersin.org/article/10.3389/fpsyg.2015.01975

Bentham, J. (1962). The Collected Works of Jeremy Bentham: An Introduction to the Principles of Morals and Legislation. New York, NY: Oxford University Press.

Copyright © 2015 Liao, Shonkoff and Dunton. This is an open-access article distributed under the terms of the Creative Commons Attribution License (CC BY). The use, distribution or reproduction in other forums is permitted, provided the original author(s) or licensor are credited and that the original publication in this journal is cited, in accordance with accepted academic practice. No use, distribution or reproduction is permitted which does not comply with these terms.

How do emotions and feelings regulate physical activity?