We investigated the testing effect in Coursera video-based learning. One hundred and twenty-three participants either (a) studied an instructional video-recorded lecture four times, (b) studied the lecture three times and took one recall test, or (c) studied the lecture once and took three tests. They then took a final recall test, either immediately or a week later, through which their learning was assessed. Whereas repeated studying produced better recall performance than did repeated testing when the final test was administered immediately, testing produced better performance when the final test was delayed until a week after. The testing effect was observed using Coursera lectures. Future directions are documented.

In the last three decades, we witnessed a rapid expansion of testing in the vast majority of countries worldwide. Students are exposed to tests which are, more so than before, standardized and associated with high-stake outcomes. These tests take various formats (comprising of, e.g., multiple-choice or short-answer questions) and are used to assess students' knowledge, understanding, and aptitude, as well as to summarize performance, assign grades, and rank students. Yet, many educators believe that testing is overly emphasized. The view is that testing should be minimized, so that time will not be taken away from, but can be devoted toward, classroom learning and instruction. Moreover, testing can create high anxieties among students (Wittmaier, 1972) or burdens for educators who would have to grade papers (see Roediger and Karpicke, 2006b), thus both parties tend to view tests negatively.

Such views are disheartening because testing, when used judiciously, can actually conduce learning benefits. Intuitively, if teachers were to administer tests on a regular basis, students would have distributed their studying throughout the academic semester, instead of cramming prior to final exams (Bangert-Drowns et al., 1991; Leeming, 2002). In fact, there is a solid body of research which demonstrates that testing promotes effective long-term learning. This phenomenon is known as the testing effect (e.g., Carrier and Pashler, 1992; Wheeler and Roediger, 1992; Chan et al., 2006), which has also been called test-enhanced learning (Roediger and Karpicke, 2006a) or, more recently, retrieval-based learning (Karpicke, 2012).

Traditionally, learning has been associated with the encoding of new knowledge and experiences whilst retrieval serves only as a means for assessing learning. Under this view, increasing opportunities for encoding or study events would promote learning, whereas increasing opportunities for retrieval would not, to the extent that retrieval were regarded merely as an assessment of a person's knowledge. Yet, retrieval processes can impact learning in diverse ways. Specifically, there are indirect and direct effects of retrieval on learning (Roediger and Karpicke, 2006b). An indirect effect of retrieval obtains when retrieval enhances learning by virtue of some secondary mediating process. For example, when one attempts to retrieve knowledge, the outcome of that attempt would constitute feedback for the learner which would, in turn, guide him or her to (re)deploy study time or change encoding strategies (Pyc and Rawson, 2010). Retrieval also produces direct effects on learning, since engaging in the process of retrieval itself produces learning. This is because every time we retrieve knowledge, that knowledge is modified, and the ability to reconstruct that knowledge during future instances is enhanced.

In the standard retrieval-based learning paradigm, learners either studied educational materials repeatedly, or studied and then practiced retrieving the materials, before taking a final test through which their learning was assessed. In Roediger and Karpicke (2006a; Experiment 2), students either studied a prose passage once and took three free recall tests about the material, studied the passage three times and took one test, or basically studied the passage four times. They then took a final retention test either 5 min or a week later. Massed studying has been known to produce short-term knowledge retention benefits (see Balota et al., 1989). Accordingly, Roediger and Karpicke (2006a) found that students who studied the material repeatedly performed better when the retention test was administered immediately. The crucial observation, however, was that students who practiced retrieving performed better than did students who merely studied when the test was administered a week later, demonstrating the benefits of retrieval practice on longer-term retention of educationally relevant knowledge (see, also, Lim et al., 2015).

Online learning platforms, of which video-recorded lectures are a central feature, are becoming popular today. As a result, learners enjoy access to a wide range of learning resources and much flexibility to learn at their own preferred pace. But, the success of video-based learning, more so than does that of traditional classroom learning, hinges heavily on independent learning and, thereby, the learners' sole responsibility to stay on track. To these ends, there is burgeoning interest toward ways of enhancing such video-based learning (see Schacter and Szpunar, 2015, for a discussion).

Our goal was first to provide a conceptual replication (see Bohannon, 2015; Open Science Collaboration, 2015 concerning the importance of replicability of psychological science) of the benefits of testing in, specifically, Coursera video-based learning (see also, Butler and Roediger, 2007; Johnson and Mayer, 2009; Szpunar et al., 2013, 2014). We particularly aimed, in this preliminary study, to provide clear, solid data in support of a larger project in our Lab, via which we hope to eventually assist actual Coursera learners to learn more effectively through the use of tests. The rationale for centering on Coursera, an educational technology company that offers MOOCs (massive open online courses), was motivated by its fast-growing prominence in the world of online learning. Within months following its establishment in January 2012, it reached more than 1.7 million learners, developing—in the words of Coursera's Co-Founder Andrew Ng—“faster than Facebook” (Pappano, 2012).

One hundred and twenty-three students from the National University of Singapore, aged 18–26, participated either voluntarily, to fulfill course requirements, or whilst receiving monetary compensation ($10 for an hour of participation). All participants reported normal or corrected-to-normal vision, with no history of hearing impairment. This research was conducted with the appropriate ethics review board approval by the National University of Singapore, and participants have granted their written informed consent.

The experiment used a 3 × 2 fully between-subjects design. The two independent variables were (1) learning condition: (a) repeated study (SSSS), (b) study with a single free recall test (SSST), and (c) study with repeated testing (STTT), and (2) retention interval: (a) 5-min vs. (b) 1-week retention interval. The dependent variable was the mean proportion of idea units recalled.

Participants' recall responses were scored by awarding 1 point for each correctly recalled idea unit; the maximum score was 30. Twelve sets of recall tests were scored by two independent raters, and the Pearson product-moment correlation (r) between their scores was 0.99. Given the high inter-rater reliability, the remaining test sets were scored by a single rater (this procedure was identical to that implemented by Roediger and Karpicke, 2006a).

A 3 × 2 × 2 between-subjects analysis of variance (ANOVA) was performed, with learning condition (SSSS, SSST, or STTT) and retention interval (5-min or 1-week) as the independent variables of primary interest, and video (“Music History” or “Brain Matter”) as the independent variable for control purposes, i.e., to insure that effects, if any, persisted across video types. A graphical representation of the data appears in Figure 1. The three-way interaction did not reach significance, F < 1. Importantly, a significant learning condition × retention interval interaction obtained, F(2, 111) = 9.88, MSe = 21.26, p < 0.001, η2p = 0.15. 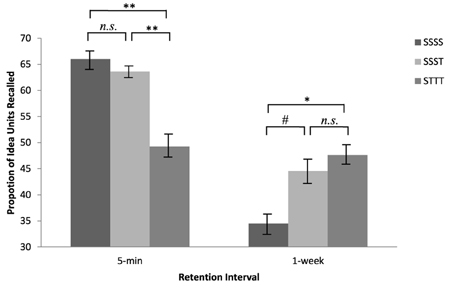 Finally, we measured—in addition to mean proportions of idea units recalled on the final free recall test—mean rates of forgetting over time, using a proportional measure: 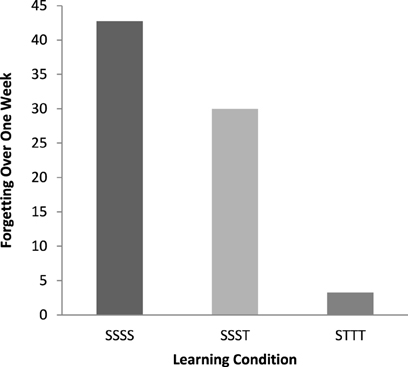 The data supported our predictions. Participants who studied the Coursera video-based materials repeatedly performed better than did those who tested themselves repeatedly, when the final test was administered immediately. In contrast, participants who studied repeatedly were in fact outperformed by participants who tested themselves, when the final test was administered a week later. That testing enhanced longer-term retention of video-based knowledge is compatible with previous findings documented in the testing effect literature. Researchers have now sought to extend research on testing to meaningful learning—the learning of complex educational materials involving inference making and knowledge application (see Karpicke and Grimaldi, 2012, for an excellent review).

Our data are intended to motivate future studies in extending the validity of research from such controlled contexts as ours in this study to naturalistic online learning environments. We have, for instance, begun investigating in our Lab how mnemonic benefits of testing-based learning involving instructional videos can be translated to ecologically relevant educational contexts—designed into easy-to-implement educational interventions—to aid learners who are embarked on actual Coursera courses. We endeavor to delineate the necessary conditions for real-world educational interventions to thrive and, ultimately, help learners discover the strategies they need to support their own educational goals.

The reviewer, Dalya Samur, and handling Editor declared their shared affiliation, and the handling Editor states that the process nevertheless met the standards of a fair and objective review.

This article is based on an Honors Thesis submitted by PY to the National University of Singapore (NUS). The research was supported in part by two NUS Faculty of Arts and Social Sciences Heads and Deanery Research Support Scheme grants (R-581-000-150-133 and R-581-000-174-101) awarded to SL.

The Supplementary Material for this article can be found online at: https://www.frontiersin.org/article/10.3389/fpsyg.2015.02064

Pappano, L. (2012, November 2). The Year of the MOOC. The New York Times. Available online at: http://www.nytimes.com/2012/11/04/education/edlife/massive-open-online-courses-are-multiplying-at-a-rapid-pace.html.

Copyright © 2016 Yong and Lim. This is an open-access article distributed under the terms of the Creative Commons Attribution License (CC BY). The use, distribution or reproduction in other forums is permitted, provided the original author(s) or licensor are credited and that the original publication in this journal is cited, in accordance with accepted academic practice. No use, distribution or reproduction is permitted which does not comply with these terms.