Based on Gross’s process model of emotion regulation (Gross, 2001), cognitive reappraisal is a strategy aimed at changing emotional reactions by re-interpreting emotional events or changing the way one thinks about events. Individuals might achieve this by re-evaluating emotional events in an objective, detached, and unemotional manner (e.g., Gross, 1998) or in a more positive light (e.g., Wrosch et al., 2000). Individual differences in reappraisal ability (i.e., trait reappraisal) were shown to modestly predict spontaneous use of reappraisal to cope with stressors. Specifically, individuals high in trait reappraisal also reported spontaneously using this strategy to a greater extent in stressful situations—such as giving a public speech or visiting the dentist (Egloff et al., 2006).

A few studies have examined the link between trait reappraisal and affective reactivity to laboratory stressors (Mauss et al., 2007; Memedovic et al., 2010; see also Ong et al., 2006). For example, in one study, individuals high (vs. low) in trait reappraisal reported experiencing less anger after receiving insulting feedback in the laboratory (Memedovic et al., 2010). Similarly, spontaneous use of a reappraisal strategy was also shown to be associated with reduced negative affect during a public speaking task (Egloff et al., 2006). Only a few recent studies have investigated the role of reappraisal in coping with day-to-day stressors. In an experience sampling study, Heiy and Cheavens (2014) asked individuals to report at random times throughout the day which strategies they used to regulate affective reactions and found that individuals who reported using reappraisal to regulate negative affect reported better current mood. However, this study focused on participants’ introspections about emotion regulation strategies rather than the extent to which participants used reappraisal to regulate emotional reactions on a regular basis. Other research using similar methodology that controlled for the use of other emotion regulation strategies (e.g., reflection, distraction) failed to find a significant relationship between daily use of reappraisal and negative affect (Brans et al., 2013). However, this research focused on the predictive role of emotion regulation strategies in negative affect rather than in negative affective reactivity to stressors. Another study experimentally manipulated the daily use of reappraisal in response to the most negative event of the day over the course of a week (Ng and Diener, 2013). Results showed that participants who were instructed to reappraise the daily negative event reported lower negative affect about the event compared with participants who were instructed to focus on the event or those who did not try to regulate their emotions. However, this research focused on the instructed use of a reappraisal strategy rather than individual differences in reappraisal. Thus, although research in this area is growing, the paucity of current evidence necessitates continued investigations into the role of trait reappraisal in affective reactivity to daily negative events.

Research evidence linking trait reappraisal to reactions to positive events is even much more scant. Although one study found that individuals who reported using a reappraisal strategy to regulate positive affect did not experience significant changes in mood (Heiy and Cheavens, 2014), this study assessed spontaneous use of reappraisal rather than trait reappraisal. Moreover, unlike regulation of negative affect, it is unclear whether emotional reactions would be spontaneously up- or down-regulated in response to pleasant experiences. On the one hand, high reappraisers might re-interpret a daily positive event as even more pleasant, in which case they would experience greater positive affect (and less negative affect), which is considered an indicator of greater hedonic well-being (Lucas et al., 1996). On the other hand, there is evidence showing that greater positive affective reactivity (Peeters et al., 2003) and lower negative affective reactivity (Bylsma et al., 2011) to positive events are associated with greater depression. Moreover, recent research demonstrates that thinking about an emotional event from the perspective of an outside observer (vs. through one’s own eyes), which is an emotion regulation strategy conducive to reappraisal, reduces the duration of affective experiences while reflecting on both negative and positive events (Verduyn et al., 2012). This work suggests that trait reappraisal might reduce reactivity not only to stressors but also to pleasant events. Therefore, further research is needed to understand how individuals high in trait reappraisal would respond to positive daily experiences.

Data collection was reviewed and approved by the Education and Social/Behavioral Sciences and the Health Sciences Institutional Review Boards (IRBs) at the University of Wisconsin–Madison. All participants provided verbal consent. The consent procedure assured participants that their participation was voluntary and that their data would be kept confidential. The IRBs approved the waiver of written consent. Data and documentation for MIDUS II are publicly available at the Inter-university Consortium for Political and Social Research website (ICPSR1).

Trait reappraisal was measured using the 4-item Positive Reappraisal Scale (Wrosch et al., 2000). Participants indicated the extent to which they used reappraisal strategies to cope with difficult situations (e.g., “When I am faced with a bad situation, it helps to find a different way of looking at things”). Participants responded to the items on a 4-point Likert scale (1 = A lot to 4 = Not at all). Items were reverse scored so that greater scores reflected higher trait reappraisal. A trait reappraisal score was calculated by averaging across the items (M = 3.096, SD = 0.604, α = 0.78).

On each of the 8 days during the NSDE II, participants completed a measure of common daily positive and negative events. Occurrence of daily negative events was measured using the Daily Inventory of Stressful Events (Almeida et al., 2002). This measure asks participants to indicate whether they had experienced any of the following common daily stressors: an interpersonal conflict, a situation that could end in an argument but they decided to avoid, a problem at work, a problem at home, something bad happening to a close other, perceived discrimination, and any other stressful experiences not covered by the previous categories. Participants also completed a measure of occurrence of daily positive events asking whether they had experienced any of the following events each day: a positive interaction with someone, a positive event at work, a positive event at home, something good happening to a close other, and any other pleasant events not covered by the previous categories. Mean number of stressors and positive events experienced per day was 0.53 (SD = 0.46) and 1.13 (SD = 0.67), respectively.

Participants also indicated the frequency with which they had experienced several affective states each day (0 = None of the time to 4 = All of the time). The items were adapted from the Non-Specific Psychological Distress and Positive Emotions Scale (Kessler et al., 2002). The items of the negative affect subscale included “restless or fidgety,” “nervous,” “worthless,” “so sad nothing cheer you up,” “everything was an effort,” “hopeless,” “lonely,” “afraid,” “jittery,” “irritable,” “ashamed,” “upset,” “angry,” and “frustrated.” (average α across days = 0.84). The items of the positive affect subscale included “in good spirits,” “cheerful,” “extremely happy,” “calm and peaceful,” “satisfied,” “full of life,” “close to others,” “like you belong,” “enthusiastic,” “attentive,” “proud,” “active,” and “confident.” (average α across days = 0.94). Because affect was measured at the day level, mean levels of positive and negative affect were estimated in a two-level null model. Mean daily negative affect was 0.191 (SE = 0.006) and mean daily positive affect was 2.727 (SE = 0.017).

Neuroticism was measured using the Midlife Development Inventory Personality Scales (Lachman and Weaver, 1997), which were specifically developed for the MIDUS project. The scales were constructed using items from existing well-validated personality inventories, e.g., the Big Five Inventory (John, 1990). Participants were asked to indicate how much each item described them (1 = A lot to 4 = Not at all). The neuroticism subscale consisted of four items (moody, worrying, nervous, and calm). The item “nervous” overlaps with an item in the daily negative affect scale and the item “calm” overlaps with an item in the daily positive affect scale used in present research. To make sure that any relationship between neuroticism and daily affect was not due to item overlap, these two items were not used when calculating neuroticism scores (see Cacioppo et al., 2010 for a similar approach in estimating the association between loneliness and depression). Responses to the items “moody” and “worrying” were recoded and averaged so that higher scores reflected greater neuroticism (M = 2.086, SD = 0.715, α = 0.61).

Participants reported their age and gender at the MIDUS II phone interview.

In the above model, β11 and β21 corresponded to change in affective reactivity to negative events and positive events, respectively, associated with one unit increase in trait reappraisal. 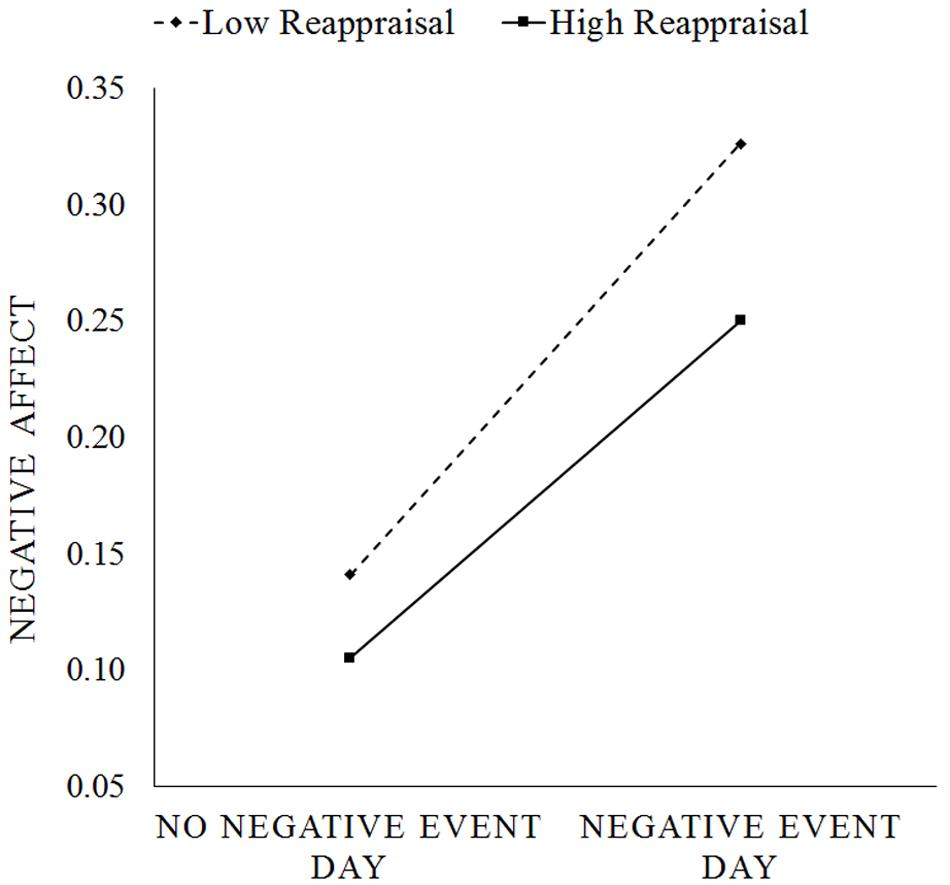 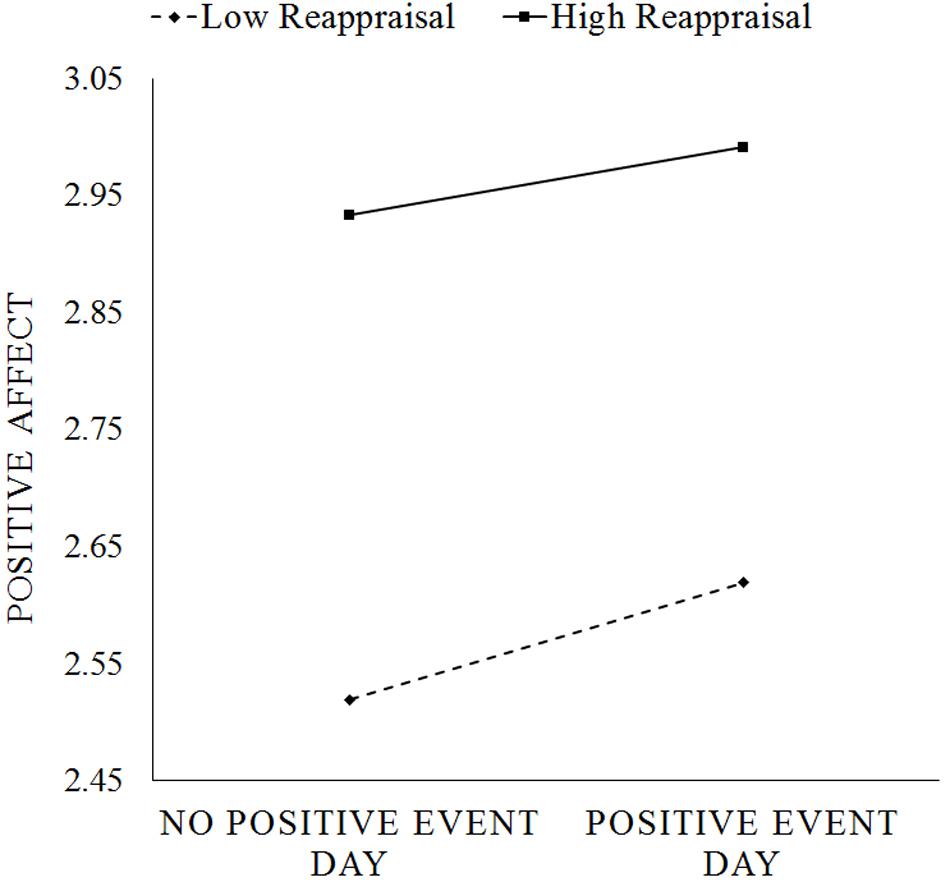 Another important implication of the present research is for understanding potential mechanisms explaining the well-established link between trait reappraisal and psychological adjustment. Specifically, trait reappraisal has been shown to predict lower depression (Garnefski and Kraaij, 2006; Aldao et al., 2010), higher self-esteem (Nezlek and Kuppens, 2008), greater life satisfaction, and better interpersonal relationships (Gross and John, 2003). However, mechanisms explaining these associations have not received much research attention. Our findings suggest that daily affective reactivity might be one of the potential mechanisms explaining the link between higher reappraisal ability and psychological adjustment.

To understand whether the use of affect regulation strategies—including reappraisal—might alter individual differences in daily affective reactivity one important question is: how stable are these individual differences? On the one hand, there is reason to expect stability. Research showed that affective reactivity is linked with relatively stable characteristics—such as activation in frontal regions of the brain (Davidson, 1992) and recollections of childhood experiences (Mallers et al., 2010). On the other hand, there is evidence that contextual factors—such as how overwhelming and uncontrollable individuals view current life demands (Sliwinski et al., 2009) or how responsive they see close relationship partners (Selcuk et al., 2016)—predict affective reactivity. This work suggests that individuals’ affective reactivity might change if their personal circumstances change. Indeed, research using the MIDUS sample showed modest stability (r = 0.37) in negative affective reactivity over 10 years (Sliwinski et al., 2009). In other words, although affective reactivity demonstrates some stability over time, there is also room for change. Therefore, it might be possible to alter one’s affective reactivity by repeatedly using adaptive emotion regulation strategies such as reappraising or re-interpreting events (e.g., Gross, 2001), viewing them from a distanced perspective (e.g., Ayduk and Kross, 2010), activating mental representations of significant others (e.g., Selcuk et al., 2012), exercising mindfulness (e.g., Grossman et al., 2004), or writing about one’s deepest thoughts and feelings about emotional events (e.g., Pennebaker, 1997). These are undoubtedly important questions for future research.

In sum, the present research is the first to document the link between trait reappraisal and affective reactivity to both positive and negative experiences in everyday life. Notably, the large sample spanning from middle to late adulthood increases the confidence in the generalizability of the findings. This work advances our understanding of the role of reappraisal in emotion regulation by showing how individual differences in the use of this strategy relate to emotional reactions to both stressors and pleasant events outside the laboratory and by offering a potential mechanism that may explain why trait reappraisal is associated with better psychological adjustment.

The MIDUS II research was supported by a grant from the National Institute on Aging (P01-AG020166) to conduct a longitudinal follow-up of the MIDUS I investigation.

Copyright © 2016 Gunaydin, Selcuk and Ong. This is an open-access article distributed under the terms of the Creative Commons Attribution License (CC BY). The use, distribution or reproduction in other forums is permitted, provided the original author(s) or licensor are credited and that the original publication in this journal is cited, in accordance with accepted academic practice. No use, distribution or reproduction is permitted which does not comply with these terms.