Methods: A total of 138 kindergarten students (65 males, 73 females; Mage = 44 months, SD = 3.5; age range = 37–53 months) were administered a delayed gratification task, a 1-back test, a Day/night Stroop test and a Go/no-go test. The outcome measures of these tests were then analyzed between groups using a Multivariate Analysis of Variance, and subsequently a Multivariate Analysis of Covariance incorporating age as a covariate.

Results: Children who were successful in delaying gratification were significantly older and had significantly better outcomes in the 1-back test and go/no-go test. With the exception of the number of hits in the go/no-go test, all other group differences remained significant after controlling for age.

Conclusion: Children who were successful in delaying gratification showed better working memory and motor inhibition relative to those who failed the delayed gratification task. The implications of these findings are discussed.

Delayed gratification refers to the process of forgoing immediate or short-term rewards to achieve to larger-valued goals in the longer term. Delayed gratification ability was traditionally assessed in young children with the “Marshmallow Test” wherein participants were presented with a marshmallow and were given a choice to eat it or wait for a certain period of time without eating it, such that they could have two marshmallows eventually (Mischel et al., 2011). It has been used as a measure of effortful control and executive function in many studies (Zhou et al., 2012). The latter refers to a set of “higher level” cognitive functions that regulate and controls the “lower level” cognitive processes and goal-directed behaviors (Alvarez and Emory, 2006). In the developmental psychology literature, delayed gratification is often characterized as a “hot” executive function involve in regulating one's emotion in order to accomplish an emotionally arousing task, in contrast to a “cool” executive function that is involved in accomplishing an emotionally-neutral task (Hongwanishkul et al., 2005). The “hot” aspect of delayed gratification is consistent with experimental evidence that suggests being in a bad mood increases one's desire to seek immediate gratification to make themselves feel better (Tice et al., 2001). It is not simply the regulation of negative emotions that affects delayed gratification outcomes, as children who were induced to experienced pride had significantly poorer delay gratification outcomes relative to a control group (Shimoni et al., 2016). This ability to delay gratification in young children have been shown to predict many positive outcomes. For instance, pre-schoolers who were able to delay gratification for a longer period of time had higher levels of resilience, better academic, and social competency, and planning ability in their adolescence (Mischel et al., 1988). Recent research have linked poor delayed gratification in young children to poor eating self regulation, specifically in eating in absence of hunger (Hughes et al., 2015) and behavioral problems (Willoughby et al., 2011; Kim et al., 2012).

Delayed gratification has been theorized to be a complex self-regulatory process involving different cognitive components (Mischel et al., 1989). Early studies supported such a conception by demonstrating the effects of various cognitive manipulations such as distractions and cognitive appraisals on the outcome of delayed gratification tasks (Mischel et al., 1972; Rodriguez et al., 1989). However, the specific cognitive processes that contribute to the delay of gratification remain unclear (Mischel et al., 2011). Specifically, Mischel et al. (2011) proposed a few cognitive processes relating to delayed gratification that need further clarification. These included cognitive inhibition which involves blocking the entry of irrelevant information or suppressing irrelevant thoughts, motor inhibition which involves suppressing a dominant response in favor of an alternative response, and working memory which keeps relevant information active such as the task demands and the knowledge of a larger but delayed reward. Furthermore, working memory has been linked to delayed discounting, a cognitive process that is implicated in delayed gratification(Wesley and Bickel, 2014). Delayed discounting describes the down-valuing of a reward with delay to its receipt and lower working memory capacity is related to steeper delay discounting rates(Hinson et al., 2003). Hence, a low working memory ability might explain the inability to delay gratification as the child may excessively discount the value of the delayed reward.

Ethics approval for the parent study was granted by a University's research ethics committee. Written informed consent was obtained from the participants' parents. The above tests were administered to the participants in their kindergarten classrooms by trained research assistants. In addition, demographic information was collected from the participants' parents via face-to-face interviews in these classrooms. These data collection took place during the baseline period of the longitudinal study. Participants were given a gift upon completion of the tests. Additionally, the parents were remunerated with HK$400 when their children have participated in all four rounds of data collection in the longitudinal study.

The delayed gratification test used in this study was adapted from Hongwanishkul et al. (2005). During the test, participants were shown three to four treats on the table, and they were told if they waited for some time, they would get all treats. After that, the participant was asked to rate each snack on how desirable they were. They were told that at any point in time, if they decided not to wait they could ring a bell to summon the experimenter. If this happened, the participant would only receive their least desirable treat. Furthermore, if at any point they were found to have consumed the treat before the end of the waiting period, they were not allowed to take the rest of the treats on the table. By the end of 3 min, if the participant did not ring the bell or consume the treat, they would be rewarded with all the treats on the table. Participants were then classified categorically based upon whether they have waited for at least 3 min to be rewarded with all the treats or have failed to do so. Their delay time (in seconds) or amount of time the participant waited before consuming the treat is recorded. Participants who did not consume the treat by the end of 3 min are recorded with a delay time of 180 s. Participants who did not show any interest or desire in consuming any of the treats (N = 8; counted among the 35 participants with missing/invalid data) were excluded from the study.

A continuous visual spatial 1-back task was modified with fewer spatial locations to suit the age group of our participants (Jaeggi et al., 2011). During each trial, children were presented with a sequence of stimuli appearing at one of four spatial locations (four grid quadrants) on a computer screen, and the positions of the stimuli were randomly determined. Each stimulus would appear for 1500 ms and the interstimulus intervals were controlled by the experimenter with a key press after a verbal response was made by the participant to indicate whether the current stimulus is located at the “same” or “different” location as the previous stimulus. There were six practice trials and 24 test trials. The test consisted of 8 “same” and 16 “different” location trials. The participants were then scored based on the number of correct trials they have completed. Higher scores corresponded to better working memory.

Differences in Demographic Characteristics between Groups

A total of 35 participants successfully waited for at least 3 min, while 103 other participants failed to do so. The demographics characteristics of these two groups of participants are shown in Table 1. Participants who waited were slightly, though significantly older than those who did not wait (p = 0.012). There were no significant differences in the number of siblings, distribution of genders as well as income groups between these two groups. 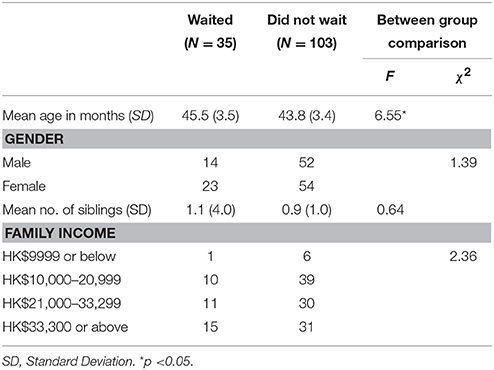 The MANOVA on the executive functions measures revealed significant group differences in the 1-back test and all four outcome measures of the go/no-go test (ps ≤ 0.034). These differences were associated with small to moderate effect sizes (0.03 ≤ Partial η2 ≤ 0.09). Specifically, participants who waited, significantly outperformed those who did not wait in these outcome measures. Given that age was significantly different between groups, a MANCOVA incorporating age as a covariate was carried out. With the exception of the number of hits in the go/no-go test, all other existing group differences remained significant. The MANOVA and MANCOVA did not reveal significant group differences in any of the Stroop test outcomes. The descriptive statistics and results of the MANOVA and MANCOVA are presented in Table 2. Delay time was positively correlated with 1-back test and, Go/no-go accuracy and sensitivity, and negatively correlated with Go/no-go false alarm. The correlation matrix of delay time and the other outcome measures is shown in Table 3.

The findings of the current report are subjected to a few limitations. Firstly, the cross-sectional nature of this study does not allow causal inferences relating to the relationship between executive functions and delayed gratification. Secondly, the relatively small sample of children who were successful at delaying gratification in this study may limit the generalization of its findings to the general population.

The current report is the first to describe the executive function profiles of children with respect to their performance on a delayed gratification task. As our results indicated, children who were unsuccessful in passing the task had underperformed their successful counterparts in measures of working memory and motor inhibition. We speculate that these children who were weak in delaying their gratification may benefit from interventions that specifically target their working memory and motor inhibition abilities. Evidence from intervention studies has been consistent this speculation. For instance, children who took part in an intervention consisting of small group game activities that specifically targeted executive functioning, such as working memory and inhibitory control, were found have significantly better post-intervention outcomes in a delayed gratification task, compared to their counterparts in the control group (Traverso et al., 2015). This, taken together with those of the current report, highlight the possibility to enhance, or if not support or compensate for certain executive function in children who are weak in delaying their gratifications. The importance of improving their delayed gratification cannot be understated, considering the long-term implications of delayed gratification in academic, psychosocial (Mischel et al., 1988) and health-related outcomes (Schlam et al., 2013).

TL and CK designed the study. CK collected the data. JY analyzed the data and wrote the manuscript. CK and TL contributed to the writing and critically reviewed the draft of the manuscript by JY.

Copyright © 2016 Yu, Kam and Lee. This is an open-access article distributed under the terms of the Creative Commons Attribution License (CC BY). The use, distribution or reproduction in other forums is permitted, provided the original author(s) or licensor are credited and that the original publication in this journal is cited, in accordance with accepted academic practice. No use, distribution or reproduction is permitted which does not comply with these terms.