Understanding Why Children Commit Scale Errors: Scale Error and Its Relation to Action Planning and Inhibitory Control, and the Concept of Size

Young children sometimes attempt to perform inappropriate actions without considering the size of an object. They deliberately try to fit their bodies onto/into extremely tiny objects, such as trying to ride on a miniature car or chair. This phenomenon is called a scale error (DeLoache et al., 2004). In the original study by DeLoache et al. (2004) about half of 18- to 30-month-old children committed at least one scale error. Scale errors were most often seen in children at around 2 years of age and characterized by showing the inverted U-shape function of age. Recent studies have shown that the scale error is a robust phenomenon that can be observed in daily life. Indeed, children commit scale errors in experimental situations, in preschool classrooms, and at home when playing with miniature objects, such as a doll or tool (DeLoache et al., 2004, 2013; Ware et al., 2006, 2010; Brownell et al., 2007; Rosengren et al., 2009; Casler et al., 2011).

Although the previous studies demonstrate that children commit scale errors (DeLoache et al., 2004, 2013), few experimental research thus far has examined potential factors that involved in the production of scale errors. The present study aimed to experimentally examine what factors contribute to the occurrence of a scale error. We focused on two hypotheses that point to the factors of action planning and inhibitory control, and the concept of size, respectively. The goal was to identify which hypothesis provides the most plausible explanation for children’s scale errors.

According to the second hypothesis, another possible factor that may affect children’s scale errors is the concept of size. There might be two possible effects of this concept on scale errors. On the one hand, conceptual development at around 2 years of age may lead to the incidence of scale errors. DeLoache and Uttal (2011) suggested that children’s immature conceptual representation is not strong enough to activate the relevant category of the miniature object. Infants’ conceptual representations become more sophisticated at around 2 years of age, and the associated motor routines become well-integrated. This integration may induce the overriding of the perception of the object’s actual size, leading to a scale error. Conversely, it is equally possible that conceptual development may suppress the occurrence of scale errors. As mentioned above, scale errors may arise from the identification of the object that does not include information about the specific miniature in sight, such as its tiny size (DeLoache and Uttal, 2011). Some studies have investigated that children fail to perform fit in an appropriate spatial relations, indicating children may fail to understand the size relations between object and other objects (Shutts et al., 2009). In other words, the conceptual development may facilitate the distinction between the miniature and general sizes of the object, which may lead to the suppression of scale errors. Thus, children who are better at understanding size concepts may be less likely to exhibit scale errors.

To test each of the two hypotheses, we employed an appropriate task. For the action planning and inhibitory control hypothesis, we used a bar task, posting task and an A-not-B task. The bar task requires planning to select the most efficient plan in accordance with the direction of an object (Jovanovic and Schwarzer, 2011). Jovanovic and Schwarzer (2011) reported that it is not until the age of 3 that children were able to integrate the different step into an action plan. The posting task requires children to use planning ability to match an object with an appropriately sized hole in advance (Street et al., 2011). Street et al. (2011) reported that 18-month-olds failed to match the objects properly, but 24-month-olds succeeded in the task, suggesting a dramatic change in planning ability between 18 and 24 months. The A-not-B task has been used to index inhibition process for infants and young children (Diamond and Goldman-Rakic, 1989; Espy et al., 1999; but see also Munakata, 1998; Smith et al., 1999). In this task, the children need to search a new location to find a desired object instead of searching a previously successful location. Although the original version of the task was for infants around 1 year of age, Espy et al. (1999) used a modified version of the A-not-B tasks and found that children’s performance on the A-not-B task improved between 23 and 66 months of age.

We also examined the relation between the concept of size and scale error. We assessed the children’s concepts using a parent questionnaire, the Kinder Infant Development Scale (KIDS). KIDS is widely used to assess children’s cognitive development from 0 to 6 years old (Miyake et al., 1989; Cheng et al., 2009; Negayama et al., 2010; Hashimoto et al., 2013). We used “language concepts” to examine whether children understood the concept. These items included measures of children’s concept of size, such as understanding big and small (i.e., “Can your child understand big and small”, “Can your child understand wide and narrow”).

We examined the age difference between children who were given the inhibitory control task and were not. Independent samples t-tests revealed that there was no significant difference in age between both groups [t(52) = 0.306, p > 0.10, d = 0.090].

The participants were recruited from a registry of families maintained in the Child Development Lab at Joetsu University of Education. The parents provided written informed consent for the children to participate and were verbally informed about the purpose of the study. The experiment was approved by the ethics committee at Joetsu University of Education.

We used the bar task developed by Jovanovic and Schwarzer (2011). The materials were a bar and box, both were composed of cardboard. The box had a plastic cylinder attached. The bar was 26 cm long, with one broad end (6.5 cm diameter) and one narrow end (4 cm diameter). The plastic cylinder was 6.5 cm in diameter and 8.5 cm in height, and it was attached in the upper right corner of the box (21 cm × 27 cm × 5 cm). The broad side of the bar had the same diameter as the plastic cylinder; therefore, it did not fit into the cylinder. Thus, the size of the cylinder was fitted with only the narrow side of the bar. Two miniature bulbs were made to protrude out by inserting the bar into the cylinder. The bar task is shown in Figure 1. 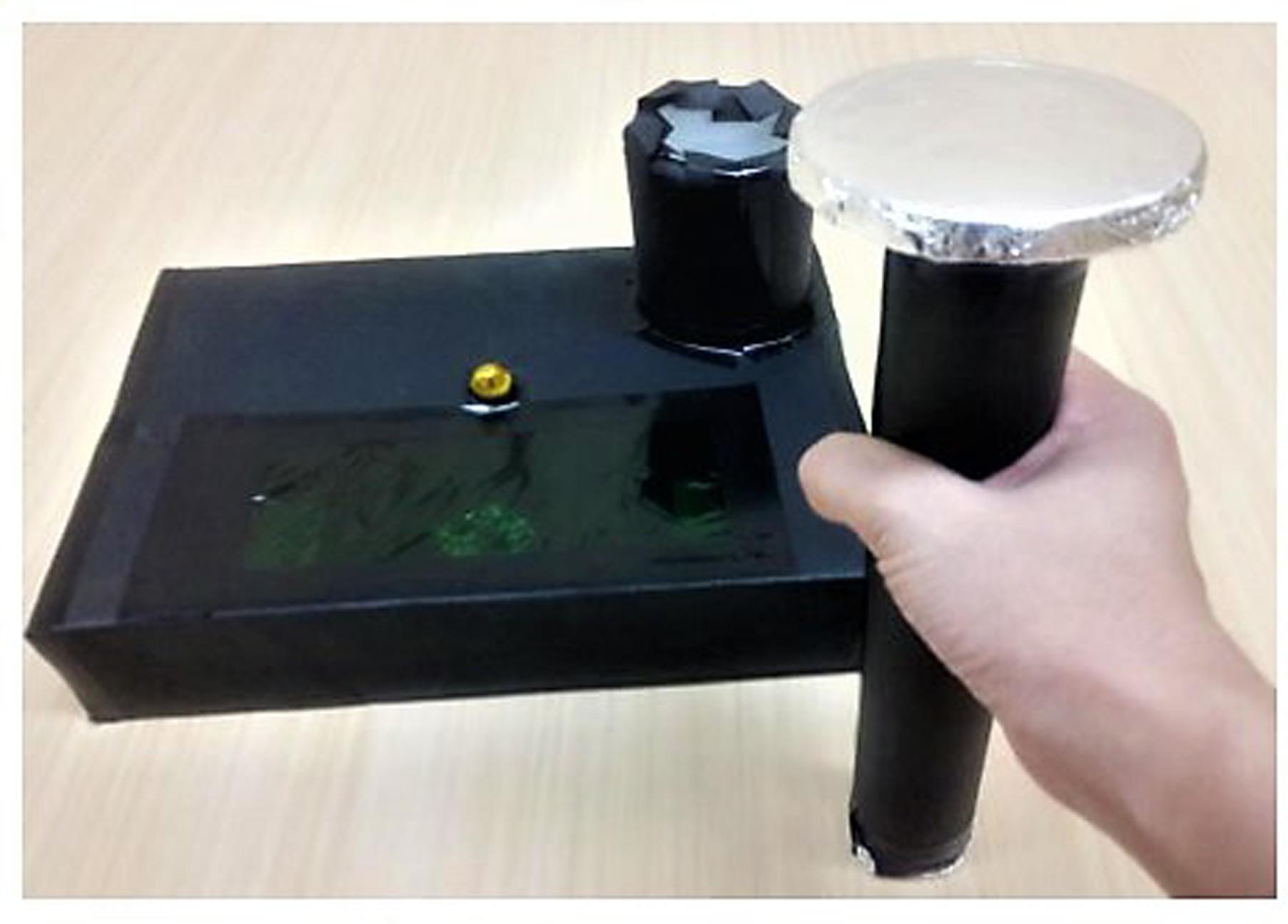 The slide, desk set, and car were placed in the play room. In the task, the children freely played with them for approximately 5 min. If he or she showed little interest in an object, the experimenter drew attention to it. The child was encouraged to interact with each toy at least twice. After that, the child and his or her parent left the play room. Meanwhile, the experimenter replaced the toys with their miniature versions and added the miniature shoes. Then, the child and his or her parent entered the room again. We observed the child’s behavior for approximately 5 min.

The materials for the inhibitory control task were two green cups, a tray, and a toy airplane. Each cup was 8 cm in diameter and 8 cm in height. The dimensions of the tray were 20 cm × 28.5 cm × 6 cm. The dimensions of the toy airplane were 6 cm × 6 cm × 3 cm. These materials were modeled on a task that had previously been used by Espy et al. (1999).

We adopted the coding criteria used by DeLoache et al. (2013): (a) The child attempted to perform part or all of the action as if he or she were using the child-sized object. (b) The child touched an appropriate body part(s) to the appropriate part(s) of the miniature object, for example, the child’s foot touched the slide’s stairs. (c) The child’s effort (facial expression) was serious, not pretending. (d) The child continued the action relatively persistent. Children were regarded as committing a scale error if the children met the four criteria.

In regards to (c), we coded the seriousness of the children’s attempts using a 5-point scale: 1 (definitely serious), 2 (probably serious), 3 (not clear), 4 (probably pretending), and 5 (definitely pretending). We regarded the children’s attempts that were coded 1 or 2 as scale errors. Multiple actions toward a target object were counted as a single scale error. For example, if the children stepped on the stairs of the slide and then sat on the slide, we counted the behavior as one scale error. If the children committed a scale error toward the slide, sat in the chair, and then committed a scale error on the slide again, we counted two scale errors toward the slide. Twenty-five percent of the sample was recorded by the secondary coder, and interrater reliability was measured using Cohen’s kappa (κ = 0.91).

A score of 1 was given when the child selected the correct cup, and a score of 0 was given for incorrect responses. We computed the overall accuracy by averaging the six trials. Twenty-five percent of the sample was recorded by the secondary coder, and the interrater reliability was measured using Cohen’s kappa (κ = 0.88).

First, we report the descriptive results for all the variables in this study. Then, the contact time of each object during the scale error task are shown. Finally, the relation among variables are reported.

TABLE 1. Partial correlation among tasks and language concepts for KIDS.

Hierarchical regression analyses were conducted to examine the relation between the number of scale errors and the language concepts. We entered age at Step 1, and then entered the posting task, bar task, and language concepts at Step 2 as potential predictors of the number of scale errors (see Table 2). We excluded the performances of an inhibitory control task from the analysis because about half of the children did not participate in the inhibitory control task.

We found a significant relation between the occurrence of scale errors and the concept of size. We assumed two possible explanations regarding the concept of size. One possibility was that the development of the object concept might lead to a scale error. The other was that the lack of an object concept may lead to a scale error. Our results supported the latter possibility. Thus, the scale error may be due to the failure to identify a miniature object as miniature (DeLoache and Uttal, 2011). However, one limitation of this finding was its reliance on a single informant measurement (the language concepts of KIDS) of the concepts of size. This issue should be examined by using multiple tasks to assess the concepts.

We found no significant main effect of age in the number of scale errors among the groups. Some previous studies showed that the incidence of scale errors showed the inverted U-shape function of age (DeLoache et al., 2004). Although we did not replicate the results, our results showed the similar developmental pattern.

In conclusion, this study suggested that scale errors stemmed from the failure of concepts of size, and not from poor action planning and inhibitory control. Despite the above limitations, this study contributes to our understanding of the mechanism of scale errors. Future studies should examine the extent to which these results are robust across different participant samples and measures.

YM and MI: Substantial contributions to the conception or design of the work; or the acquisition, analysis, or interpretation of data for the work. YM and MI: Drafting the work or revising it critically for important intellectual content. YM and MI: Final approval of the version to be published. YM and MI: Agreement to be accountable for all aspects of the work in ensuring that questions related to the accuracy or integrity of any part of the work are appropriately investigated and resolved.

Copyright © 2017 Ishibashi and Moriguchi. This is an open-access article distributed under the terms of the Creative Commons Attribution License (CC BY). The use, distribution or reproduction in other forums is permitted, provided the original author(s) or licensor are credited and that the original publication in this journal is cited, in accordance with accepted academic practice. No use, distribution or reproduction is permitted which does not comply with these terms.