Previous research documents that men and women can accurately assess male physical strength from men’s faces, bodies, and voices (Sell et al., 2009, 2010), and that women prefer the dance movements of physically strong men to those of physically weak men (Hugill et al., 2009; Weege et al., 2015b). A biomechanical analysis showed that stronger men who displayed larger, more variable, and faster movements with their arms were judged as better dancers by both sexes (McCarty et al., 2013). More recently, Fink et al. (2016) reported in a German sample that both sexes judged the gait of strong men higher in strength, dominance, and attractiveness than the gait of weak men. Fink et al. (2016) documented a sex difference in attractiveness assessments of strong and weak male walkers such that women but not men judged strong walkers as more attractive than weak walkers. Thus, both sexes may use physical strength information from gait cues in assessments of male quality and competiveness.

In the present study, we expand on these findings by considering men’s and women’s perceptions of male gait in Chile, Germany, and Russia – three countries that differ in social and cultural norms (among other measures), and along indices of development (United Nations Development Programme1). There is little information available about how gait is perceived in different countries, and most investigations of gait are clinical or sports science studies. In a preliminary study on Brazilian and German women’s attractiveness perceptions of (British) men’s dance movements, Fink et al. (2014) reported a positive correlation of Brazilian with German women’s assessments of men’s dance attractiveness, suggesting cross-cultural similarity in dance attractiveness perceptions. Additional analysis revealed a significant difference between Brazilian and German women’s ratings of men’s dance movements, which were attributable to personality of the dancer. Thus, although there is some cross-cultural consensus in women’s perceptions of men’s dance movements, part of the variation in dance movement perception is attributable to culture-dependent personality cues derived from dance movements.

Here, we consider gait of healthy young men and investigate men’s and women’s strength and attractiveness assessments of strong and weak male walkers. In addition to strength variation in male walkers, we manipulate walking speed. Schmitt and Atzwanger (1995) reported a positive correlation of walking speed with socioeconomic status in men. Whether an effect of walking speed on perception exists, especially in a sample that is relatively homogeneous in socioeconomic status, is yet unclear. There is mixed opinion about the possible effect of gait speed on perception. If Schmitt and Atzwanger (1995) are correct, manipulating gait speed should have an effect on perception, with more positive assessments provided to fast walkers and less positive assessments provided to slow walkers. However, it is also plausible that faster movements are associated with less positive assessments, as has been reported for dance (Weege et al., 2015a), and that slow movements indicate self-composure and security, for example.

We hypothesized differences in strength perceptions of strong and weak male walkers, for both men and women, and independent of country. If such differences are observed across cultures, this would suggest a universal capacity to derive perceptions of physical strength from male gait. Following previous reports (Fink et al., 2016), we expected to detect a sex difference in attractiveness perceptions of male gait, with women providing more positive assessments to strong walkers and less positive assessments to weak male walkers, compared to men’s assessments. With regard to an effect of speed, the study was exploratory, given the lack of evidence from previous studies.

Walk movements were recorded with an optical motion-capture system (Vicon, Oxford, United Kingdom) running Vicon Nexus software. Thirty-nine reflective markers were attached to each participant’s major joints and body parts (Plug-in-gait marker set). Participants did not receive instructions on how to walk, but were told to remain within a certain area (marked with adhesive tape on the floor) in a room dedicated to motion-capturing. A male and a female investigator was present during recordings. Gait recordings were applied to size- and shape-standardized, sex-neutral humanoid characters using Motionbuilder software (Autodesk Inc., San Rafael, CA, United States) and rendered as 773 pixel × 632 pixel video clips. A sequence of 3 s (4–5 strides) was digitally isolated from the middle of each walk sequence.

For presentation in the main experiment, three repetitions of each participant’s walk sequence (in slow, normal, and fast condition, respectively) were used to construct a new video showing walk movements in a loop.

In Germany, video ratings were collected on laptop computers running Medialab v2012 (Empirisoft Corp., New York, NY, United States) software. In Chile and Russia, videos were presented on PC monitors using SurveyMonkey2. The videos were embedded in the presentation via a (private) YouTube account with advertisements removed and could be replayed. Judgments of attributes were made in blocks and the order of clips was randomized within each block, with blocks randomized across participants.

Figure 1 presents descriptive statistics for men’s and women’s strength and attractiveness perceptions of strong and weak male walkers in Chile, Germany, and Russia. A mixed-design ANOVA was performed on perception measures with walker strength as a within-subjects factor and country and observer’s sex as between-subjects factors (Table 1). For this analysis, we considered only judgments of walkers in the “normal speed” condition. There were main effects of walker strength on perceptions of strength and attractiveness. Strong walkers were rated higher on both attributes (Figure 1). The interaction effect of walker strength × country was significant for perceptions of attractiveness but not strength. Gait attractiveness ratings of strong walkers were highest in Germany, followed by Russia and Chile; for weak walkers, Russian attractiveness ratings were highest, followed by German and Chilean assessments (Figure 1). However, post hoc multiple tests did not reveal significant differences for these comparisons (Tukey’s HSD test, all p > 0.06). 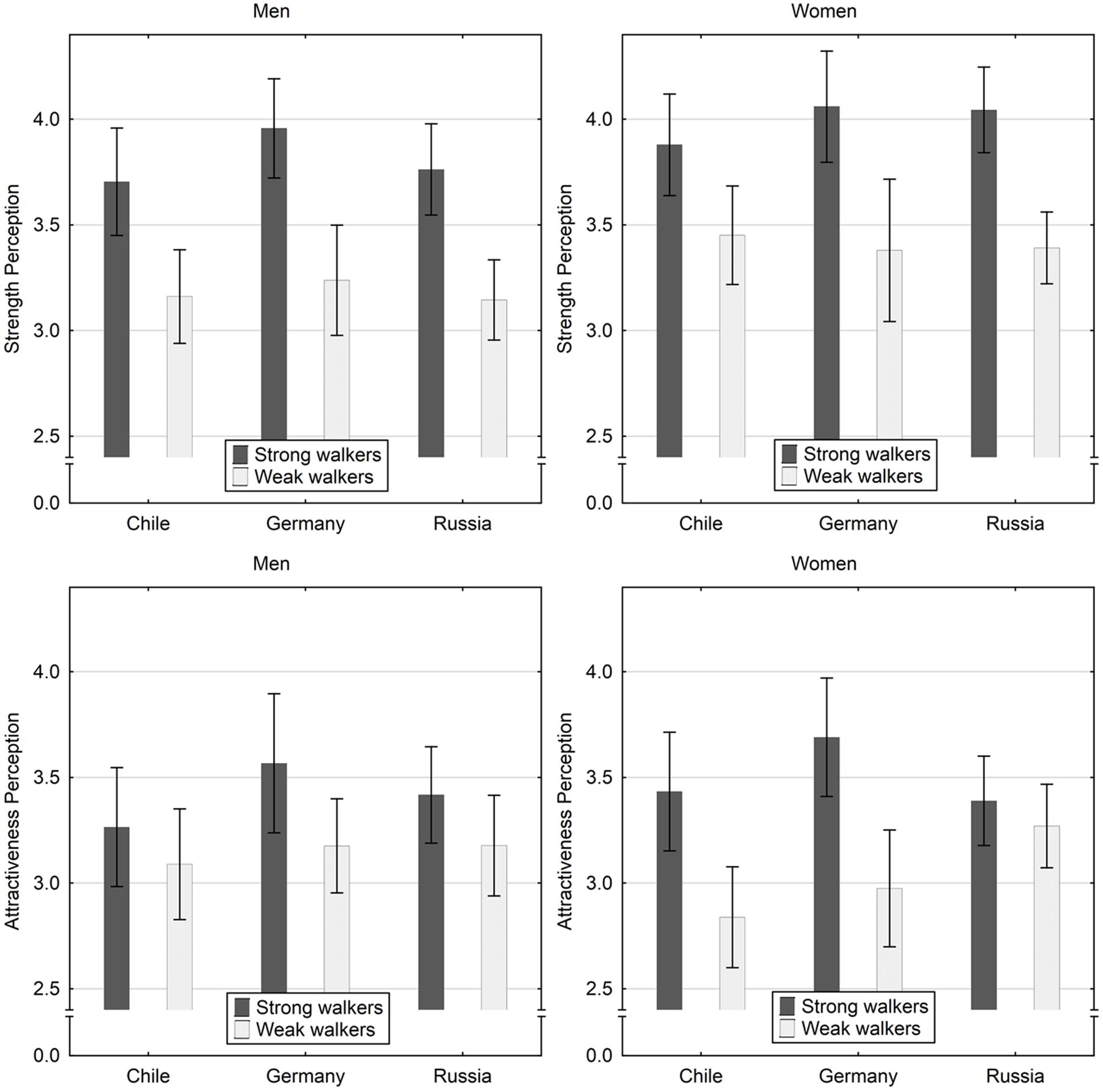 FIGURE 1. Strength and attractiveness perception (M and 95% CI) of strong and weak male walkers at normal speed across countries. 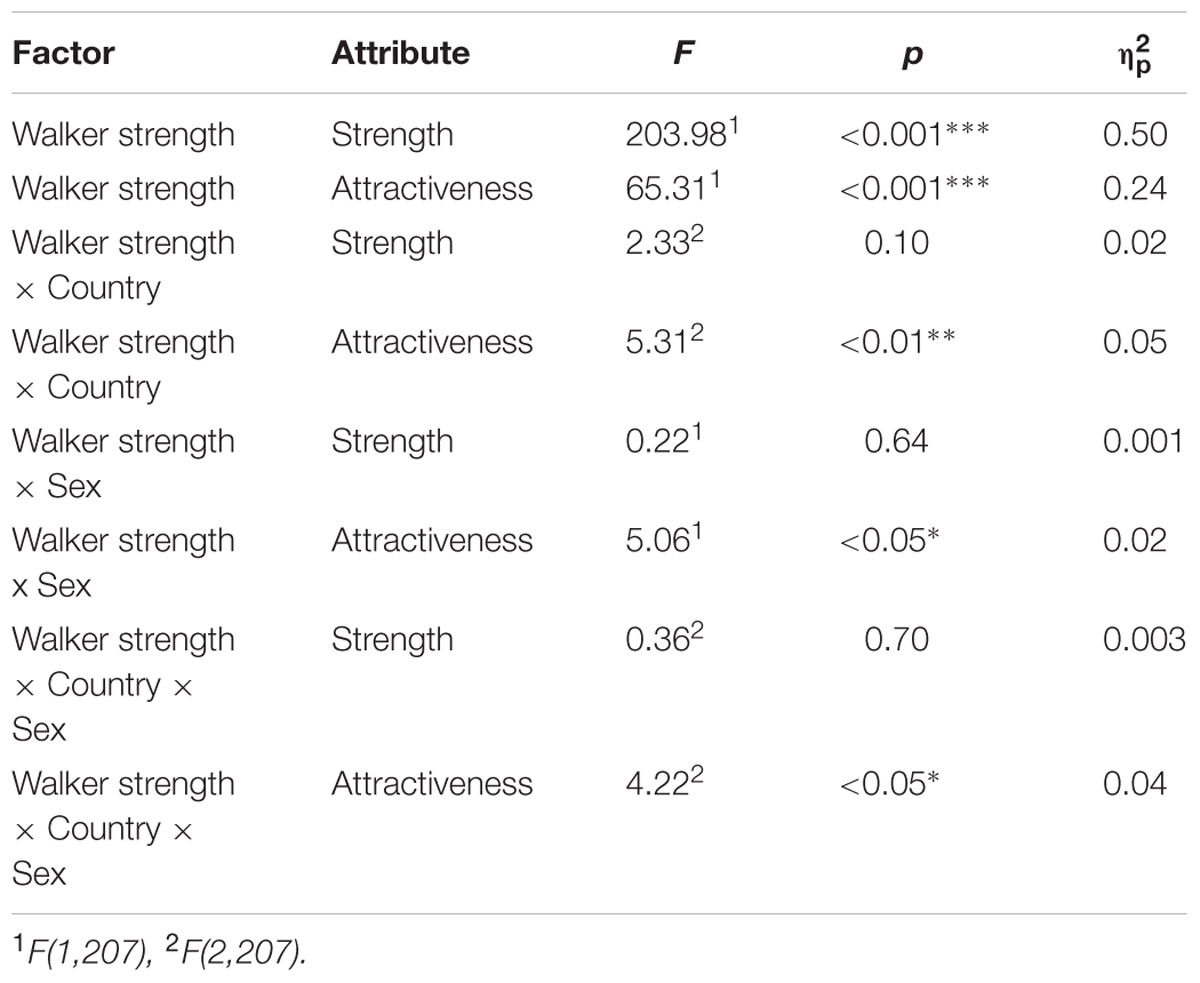 TABLE 1. Statistical comparisons of strength and attractiveness perceptions of strong vs. weak male walkers at normal speed in Chile, Germany, and Russia.

TABLE 2. Descriptive statistics (M ± SD) of strength and attractiveness assessments of strong and weak male walkers at slow, normal, and fast speed in Germany and Russia. 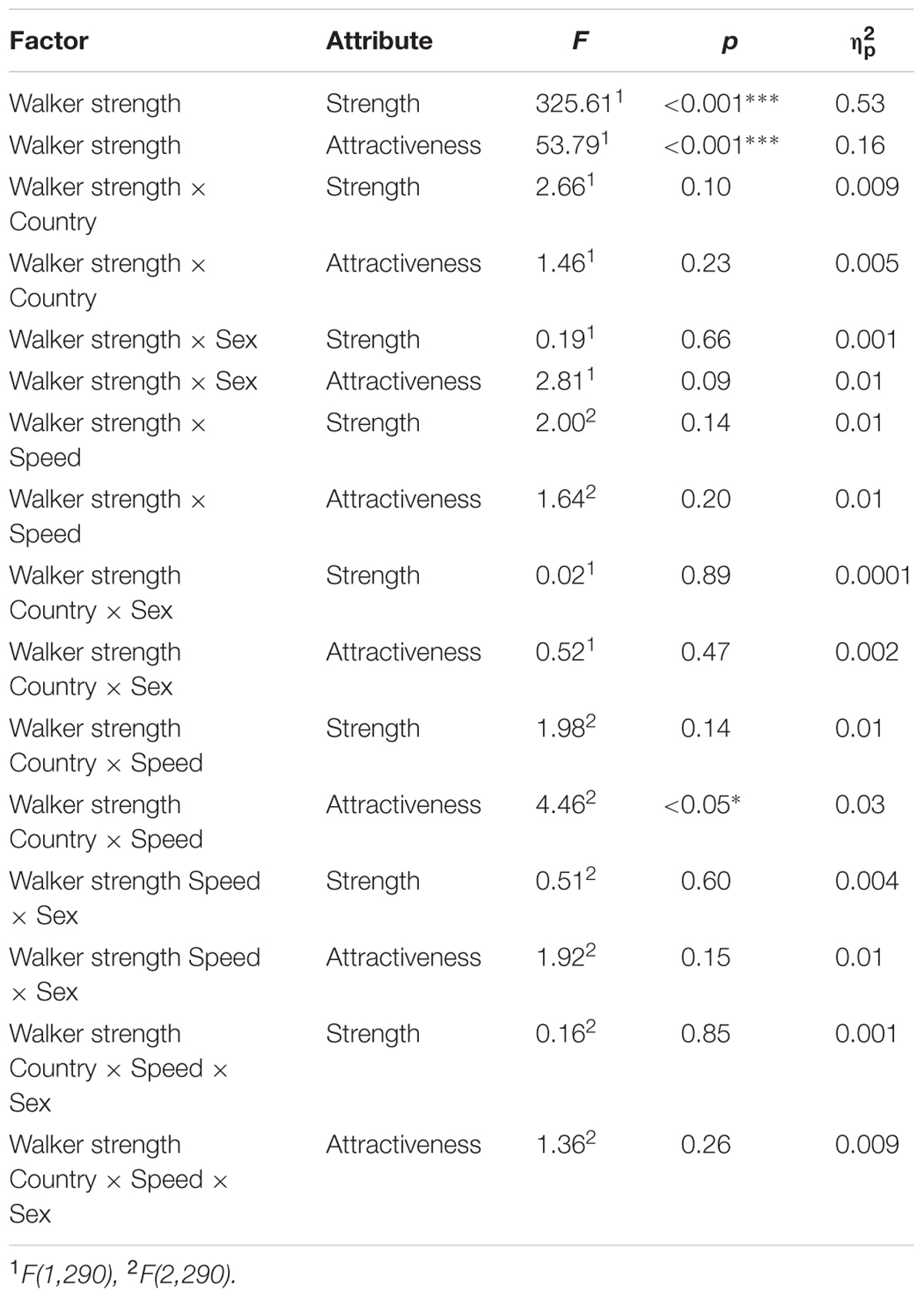 TABLE 3. Statistical comparisons of strength and attractiveness perceptions of strong vs. weak male walkers at slow speed, normal speed, and fast speed in Germany and Russia.

The results of the present study confirm the previously reported effect of male physical strength on perceptions of strength and attractiveness from gait (Fink et al., 2016) in three countries – Chile, Germany, and Russia. Moreover, and in accord with Fink et al. (2016) we identified an interaction of walker strength with sex of perceiver for attractiveness perceptions, but not for assessments of strength, such that women tended to provide higher judgments than men to strong walkers, and men tended to provide higher judgments than women to weak walkers. These results suggest that humans are sensitive to gait cues in order to infer male physical strength independent of perceiver’s sex and country. Further, women more than men seem to discriminate between strong and weak walkers when assessing attractiveness. These results are consistent with greater variability in women’s assessments of male attractiveness compared to men’s assessments of female attractiveness—especially when women consider a man’s status (e.g., Townsend and Wasserman, 1997). Physically stronger men may signal competitiveness in intrasexual conflict, in addition to security, self-confidence, and status, thus providing information that women across countries – at least in samples of industrialized societies – are sensitive to, and show a preference for.

Perceptions of strength distinguished between strong and weak male walkers in all three countries. Perceptions of attractiveness varied between countries and sex, although effect sizes for these interactions were small. Thus, interpretations of country- and sex-specific assessments of male gait attractiveness must be made with caution. In Chile and Germany, women judge strong male walkers to be more attractive than weak male walkers, whereas in Russia there was no such difference. In the current study, we focused on comparisons of men’s and women’s perceptions of strength from gait across countries. Thus, we did not include specific measures of, for example, social dominance orientation (SDO; Pratto et al., 1994) and other measures of individual differences in personality, which may explain further sex- and country-specific effects of strength attributions, as it was reported to be the case for women’s perceptions of men’s dances (Fink et al., 2014).

Manipulations of playback speed of gait did not affect strength perceptions of men or women in either country in which they were investigated (Germany and Russia). Thus, the assessment of physical strength from gait cues appears to be independent of gait speed. German and Russian participants judged strong walkers as more attractive when viewed at slow and fast speed. Germans tended to judge strong walkers higher on attractiveness than Russians when viewed at normal speed and Russian attractiveness judgments of weak walkers were higher than those of Germans. Again, because of the small effect sizes, these results should be interpreted with caution. The manipulation of playback speed of gait videos should be regarded as approximation to “ideal” stimuli, thus providing only preliminary information about perceptions of gait speed. Walking faster or slower is associated with changes in movement biomechanics, and such changes were not considered in our manipulations. Future research may profitably investigate whether it is, in fact, gait speed changes that influence women’s attractiveness perceptions of male walkers (as suggested by the current study), or if altering gait speed is linked to other gait characteristics that affect perception.

We demonstrate an effect of male gait on perceived strength in three countries, suggesting that the capacity to derive physical strength information from male gait is not culture-specific. Women more than men seem to discriminate between strong and weak walkers when assessing attractiveness of male gait. Attractiveness assessments of male gait show some local variation, and may be influenced by society-specific emphasis of male physical strength. Future studies investigating the effect of strength from gait cues on perception should test whether the reported effects extend to pre-industrialized societies. If this is the case, it would support the suggestion that specific biomechanical characteristics of male gait are linked to physical strength, and that humans may be adapted to use these cues in social perception.

This study was carried out in accordance with the recommendations of the German Psychological Society. All subjects gave written informed consent in accordance with the Declaration of Helsinki. In case of minors, consent was additionally obtained from their legal guardians or teachers. The protocol was approved by the ethics committees of the University of Göttingen and Northumbria University.

BF, MW, and JO conceived the study. MW, MB, AM, and JM-R collected data. BF and MW analyzed the data. BF, JO, MB, YS, and TS wrote the manuscript. All authors edited the manuscript for intellectual content, provided critical comments on the manuscript, and agreed to be accountable for the content of the work.

This research was supported by a grant from the German Research Foundation (FI1450/7-2) awarded to BF and by the Open Access Publication Funds of the University of Göttingen.

We thank Bettina Weege, Nick Neave and Kristofor McCarty for assistance with gait recordings at Northumbria University and creation of stimuli.

Copyright © 2017 Fink, Wübker, Ostner, Butovskaya, Mezentseva, Muñoz-Reyes, Sela and Shackelford. This is an open-access article distributed under the terms of the Creative Commons Attribution License (CC BY). The use, distribution or reproduction in other forums is permitted, provided the original author(s) or licensor are credited and that the original publication in this journal is cited, in accordance with accepted academic practice. No use, distribution or reproduction is permitted which does not comply with these terms.