Department of Developmental and Social Psychology, Faculty of Medicine and Psychology, Sapienza University of Rome, Italy

The Indirect Effect of Emotion Regulation on Minority Stress and Problematic Substance Use in Lesbian, Gay, and Bisexual Individuals

Several studies have examined the effect of discrimination specifically on alcohol and substance use. Researchers have identified LGB-specific family rejection and victimization as specific types of minority stress that are linked to problematic alcohol and substance use (Ryan et al., 2009; Willoughby et al., 2010). Family rejection, defined as a family member’s rejection of an LGB individual’s sexual orientation status (Harter, 1999), may explain why some LGB individuals suffer from elevated rates of psychopathology such as depression and substance use (Ryan et al., 2009; Willoughby et al., 2010; Bregman et al., 2013). Critically, in a study assessing rates of family rejection in LGB adolescents, 36% of respondents indicated experiencing at least one negative reaction from a family member following sexual orientation disclosure (Pilkington and D’Augelli, 1995). Additionally, LGB-specific victimization events, defined as verbal harassment and physical assault due to sexual orientation, affect up to 80% of LGB individuals ages 15–21 (Pilkington and D’Augelli, 1995). This victimization is linked to higher rates of mental health problems in general (e.g., depression, post-traumatic stress disorder; Lee et al., 2016), and problematic alcohol and substance use specifically (Willoughby et al., 2010; Bariola et al., 2016). It is possible that increased negative affect due to elevated rates of discrimination experiences account for the differences in problematic alcohol and substance use between bisexual individuals and lesbian and gay individuals.

Despite evidence linking LGB-specific instances of discrimination with problematic alcohol and substance use, not everyone who experiences discrimination, reports problematic alcohol and substance use. A promising mechanism for this relationship may be regulatory capacity, as a recent study found that LGB individuals who were better able to adaptively cope with LGB-related discrimination showed better overall mental health outcomes (Nadal et al., 2011; Kaysen et al., 2014). In line with this notion, minority stress theory implicates coping mechanisms as a crucial link between experiences of LGB-specific discrimination and negative mental health outcomes (Meyer, 2003). Hatzenbuehler et al. (2009) extended Meyer’s framework by suggesting that coping strategies that regulate affect [emotion regulation (ER)] serve as mediators between experiences of discrimination and psychopathology for LGB individuals (Hatzenbuehler et al., 2009).

Emotion regulation, defined as the process by which individuals alter how they experience and express emotions (Gross, 1998), has been implicated in the onset and maintenance of many psychiatric disorders, including problematic alcohol and substance use (Aldao et al., 2010). Adaptive ER, such as acceptance of emotions, is negatively associated with symptoms of psychopathology (Aldao et al., 2010), whereas maladaptive ER, such as avoidance and rumination, is positively associated with symptoms of anxiety, depression, eating disorders, and alcohol and substance use disorders (Aldao et al., 2010; Shadur and Lejuez, 2015).

A considerable amount of research has linked poor ER to symptoms of psychopathology, particularly problematic alcohol and substance use, yet there is a paucity of work examining these relationships in LGB individuals. Of the available work, ER is related to experiences of minority stress, anxiety, and depression in LGB individuals, with ER difficulties partially explained the relationship between minority status, anxiety, and depression in LGB adolescents (Hatzenbuehler et al., 2008, 2009). Furthermore, previous work has found that LGB individuals often use substances to cope with victimization (Feinstein and Newcomb, 2016). Thus, it is important to further examine ER as a possible explanatory link between experiences of discrimination to problematic alcohol and substance use. 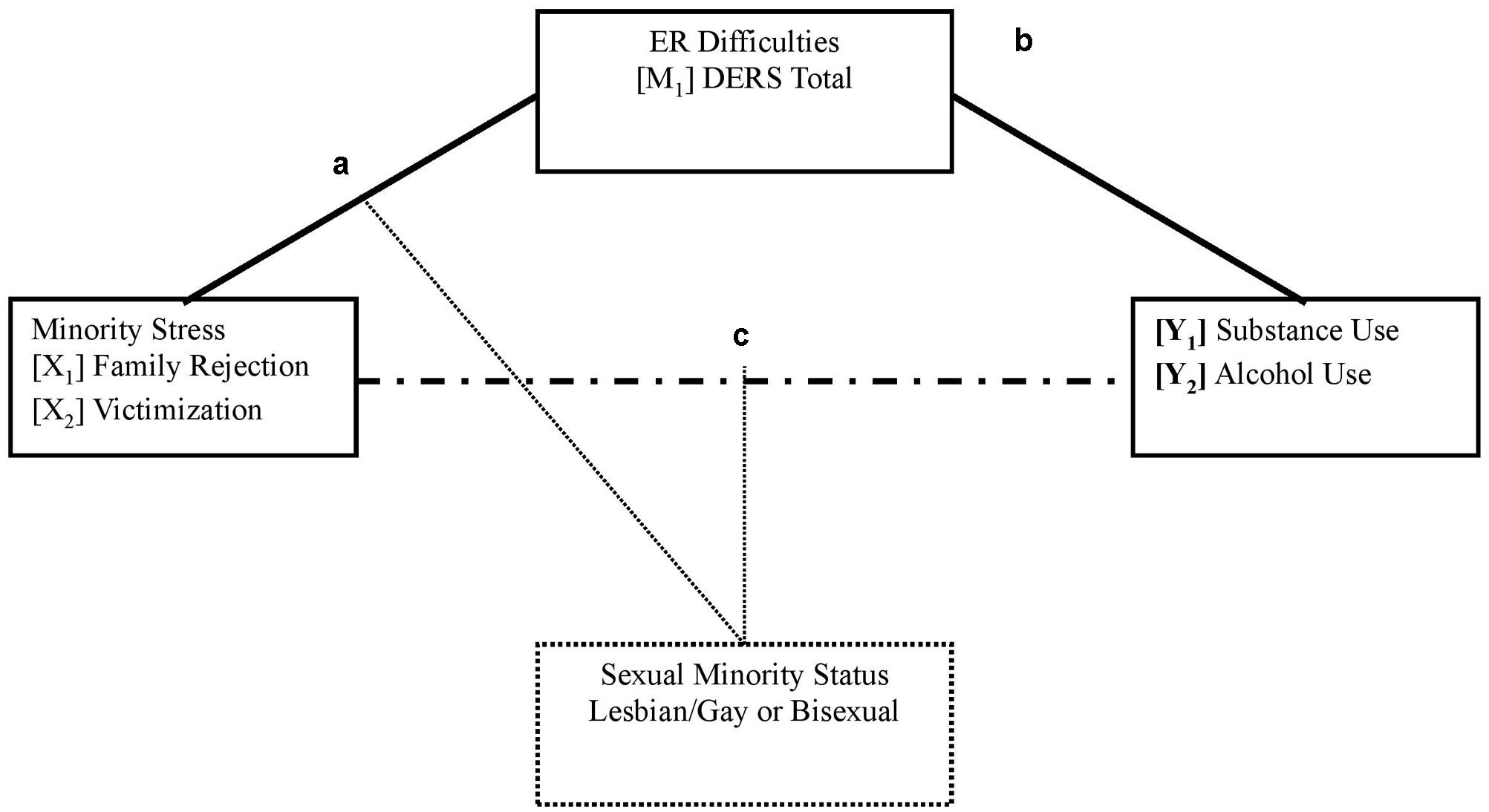 Four hundred and ninety two participants were drawn from two online studies (both with identical procedures) examining LGB discrimination and sexual orientation self-disclosure. Recruitment occurred through Facebook advertisements, Craigslist posts, and emails to LGB organizations and listservs recruiting “gay,” “bi,” and “queer” participants for a study on sexual orientation and emotions. Eligible participants needed to: (1) be over the age of 18 years, (2) self-identify as lesbian, gay, or bisexual, and (3) currently reside in the United States. Given the reduced control online data collection affords, we took several measures to ensure maximal data integrity. First, if participants did not meet the three criteria above, the survey automatically closed out preventing the collection of any data. We then kept track of IP addresses in order to ensure that individuals were not answering those questions multiple times until they “met” the inclusion criteria. Second, we excluded participants who provided incomplete surveys (e.g., did not complete any questionnaires), who completed the study multiple times, and who failed more than four “attention questions” designed to catch automated bot programs and disengaged participants (e.g., Oppenheimer et al., 2009; Hauser and Schwarz, 2016). Gender minority (e.g., transgender, gender non-conforming) participants were excluded from the present analyses (N = 101) due to sexual orientation-specific stressors likely impacting these participants differently than cisgender participants (Hendricks and Testa, 2012). Additionally, 86 participants were removed due to incomplete survey data, leaving the final study sample with 305 participants (Mage = 28.68, SD = 12.08).

After providing informed consent, participants completed a battery of self-report questionnaires. All study participation was completed online via Qualtrics, a web-based survey program that meets high standards for data security1. Participation in the entire study took approximately 90 min. Following study completion, participants were debriefed and given a $15 Amazon.com electronic gift card for their participation. This protocol was approved by the Institutional Review Board at the institution where the research was conducted.

Alcohol and Substance Use

The Daily Heterosexist Experiences Questionnaire (DHEQ; Balsam et al., 2013), is a self-report 50-item measure that assesses emotional distress in response to heterosexist events experienced by lesbian, gay, bisexual, and transgender individuals on a Likert scale from 0 (Did not happen/not applicable to me) to 5 (It happened, and it bothered me extremely). The present investigation focused primarily on two of the nine subscales that assess family rejection (Family of Origin; e.g., “Being rejected by your mother for being LGBT”) and victimization (e.g., “Being punched, hit, kicked, or beaten because you are LGBT”). Both DHEQ subscales demonstrated strong internal consistency in the present study [α = 0.79 (Family of Origin), α = 0.83 (Victimization)]. Subscales were computed as means of the items for each factor, where the Family of Origin included six items and the Victimization subscale included five items (Balsam et al., 2013).

The Difficulties with Emotion Regulation Scales (DERS; Gratz and Roemer, 2004), is a self-report 36-item self-report measure that assesses habitual difficulties regulating emotions in a number of dimensions assessed on a 5-point Likert scale from 1 (Almost never) to 5 (Almost always). The present investigation focused on the DERS total score, which was entered as the mediator in the statistical model sample. The DERS total score was a sum total of all items, and showed excellent internal consistency (α = 0.96).

Data analysis was conducted using SPSS. Differences in demographic variables were assessed. Moderated mediation analyses were conducted using the PROCESS macro to determine the conditional effect of sexual orientation status (lesbian/gay vs. bisexual) on the relationship between discrimination and problematic alcohol and substance use, through ER difficulties (Model 8; Hayes, 2013). Bootstrapping with 10,000 data re-sampling was conducted to detect the indirect effects. This method is a non-parametric method used to best estimate the sampling distribution from which the data was collected, which is based on re-sampling the data with replacement (Hayes and Preacher, 2013). A bootstrapped confidence interval that does not include zero is considered statistically significant (Preacher and Hayes, 2008). All mediation analyses controlled for age and gender. Examining missing values using Little’s Missing Completely at Random test indicated that the data were missing at random (p > 0.05), and analyses were conducted using listwise deletion, where only those with non-missing data were included in the analyses. 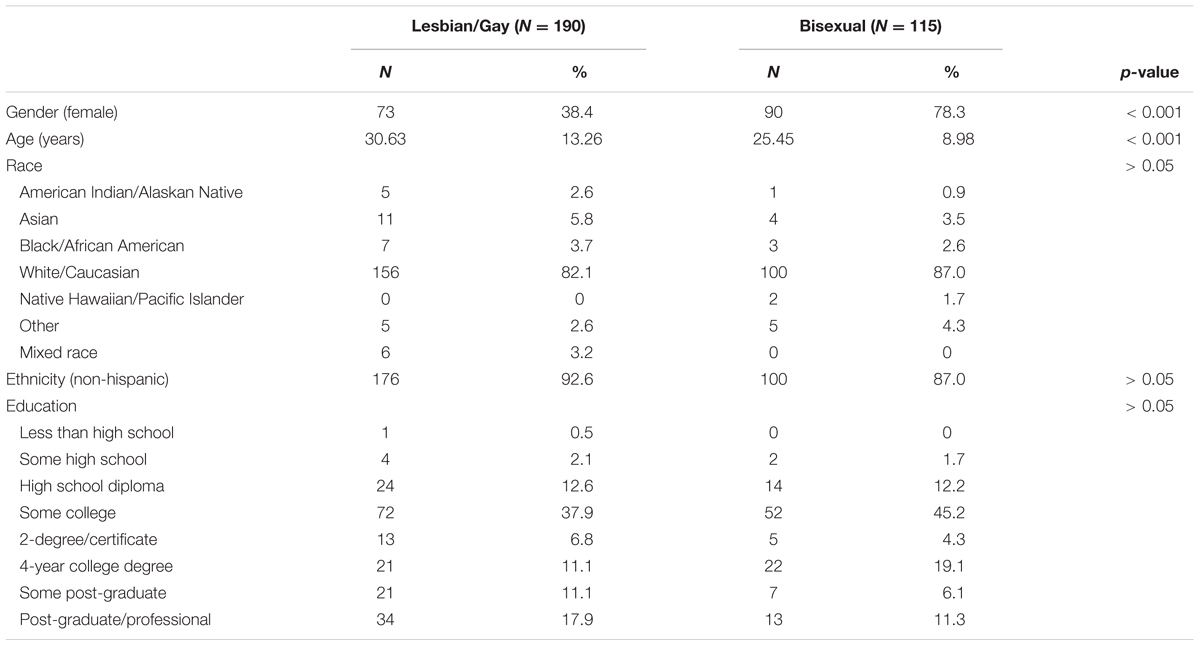 Family Rejection and Problematic Alcohol Use

Family Rejection and Problematic Substance Use

Victimization and Problematic Alcohol Use

Victimization and Problematic Substance Use 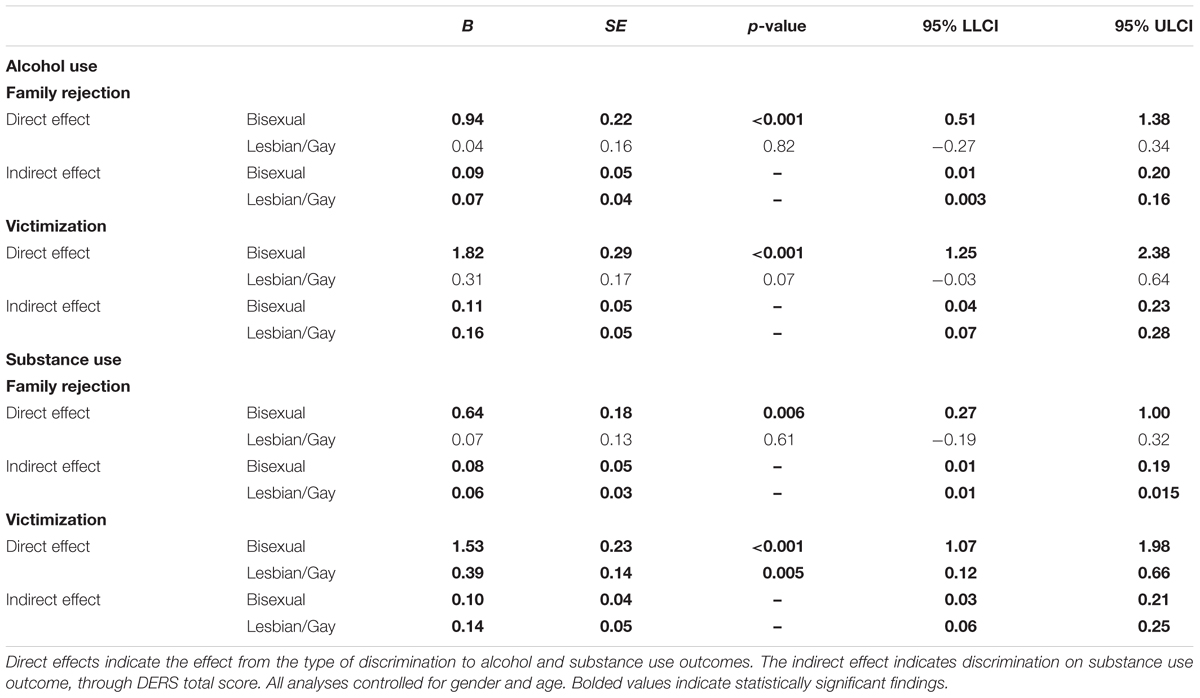 TABLE 3. Direct and indirect mediation results for alcohol and substance use outcomes for bisexual and lesbian/gay individuals.

Increases in negative affect are largely associated with poor ER (Aldao et al., 2010). Instances of discrimination, as sources of increased negative affect, are experienced to a greater degree by bisexual individuals (Pilkington and D’Augelli, 1995; Bostwick et al., 2010). It is therefore possible that individuals may use substances as a coping mechanism to decrease their negative affect (Feinstein and Newcomb, 2016), regardless of their ability to regulate negative emotions. ER deficits have been shown to both increase vulnerability for using substances and alcohol to cope as well as developing a substance and/or alcohol use disorder (Shadur and Lejuez, 2015). More research in this area should elucidate the temporal order of discrimination and ER as it related to sexual orientation, as well as the function of alcohol and substance use in the context of minority stress.

Additionally, the present study provided evidence to support ER as an important mechanism explaining alcohol and substance use in response to instances of discrimination. As hypothesized, in the context of family rejection and victimization, overall ER difficulties served a critical role in the pathway between instance of discrimination and problematic alcohol and substance use for LGB individuals. However, contrary to previous research, as well as hypotheses, (Koh and Ross, 2006; Bostwick et al., 2010; Pakula et al., 2016), there no were differences between LGB individuals on the indirect effect of overall ER difficulties. Since victimization (e.g., physical violence, hate crimes, etc.) and family rejection are associated with increases in negative affect (Hatzenbuehler et al., 2009), it makes sense that these instances of discrimination are associated with greater ER difficulties, which in turn is associated with more severe psychopathology for all LGB individuals in the study. Given the emotional intensity of these situations, as well as the strong impetus to find safety, it is possible that ER strategies serve an equally critical role for all LGB individuals.

This study benefits from a number of strengths, including the large sample size as well as providing initial evidence for ER as a potential mechanism explaining links between LGB-specific discrimination and problematic alcohol and substance use. However, there are limitations that must be noted. First, the data collected is cross-sectional, prohibiting causal and temporal claims to be made regarding the relationships. Additionally, since the study did not explicitly recruit substance and alcohol users, there was limited variability in the scales assessing alcohol and substance misuse. Further, due to the make-up of the sample (primarily white with experiences in higher education), the generalizability of the findings may be limited. Finally, although numerous steps were conducted to minimize lack of control for an online study, it is still possible that participants answered the questionnaires without spending the time to understand the question asked.

Harter, S. (1999). The Construction of the Self: A Developmental Perspective. New York City, NY: Guilford Press.

Copyright © 2017 Rogers, Seager, Haines, Hahn, Aldao and Ahn. This is an open-access article distributed under the terms of the Creative Commons Attribution License (CC BY). The use, distribution or reproduction in other forums is permitted, provided the original author(s) or licensor are credited and that the original publication in this journal is cited, in accordance with accepted academic practice. No use, distribution or reproduction is permitted which does not comply with these terms.