The Multi-dimensional Scale of Perceived Social Support (MSPSS) is one of the most extensively used instruments to assess social support. The purpose of this research was to test the reliability, factorial validity, concurrent validity and measurement invariance across gender groups of the MSPSS in Chinese parents of children with cerebral palsy. A total of 487 participants aged 21–55 years were recruited to complete the Chinese MSPSS and Parenting Stress Index-Short Form (PSI-SF). Composite reliability was calculated as the internal consistency of the Chinese MSPSS and a (multi-group) confirmatory factor analysis (CFA) was conducted to test the factorial validity and measurement invariance across gender. And Pearson correlations were calculated to test the relationships between MSPSS and PSI-SF. The Chinese MSPSS had satisfactory internal reliability with composite reliability values of more than 0.7. The CFA indicated that the original three-factor model was replicated in this specific population. Importantly, the results of the multi-group CFA demonstrated that configural, metric, and scalar invariance across gender groups was supported. In addition, all the three subscales of MSPSS were significant related with PSI-SF. These findings suggest that the Chinese MSPSS is a reliable and valid tool for assessing social support and can generally be utilized across sex in the parents of children with cerebral palsy.

Cerebral palsy (CP), as a common cause of disability in children, is a serious threat to parents’ psychological and physical health (Cheshire et al., 2010; Whittingham et al., 2013). Social support is an important resource to cope with various stressors (Campbell et al., 2011), and can mediate the influence of parenting stress on psychological and physical health in parents of children with CP (Jeong et al., 2013). In this study, we sought to validate a social support scale in a sample of Chinese parents of children with CP, because specific population groups may have different social support expectations, social networks, and cultural backgrounds than the normal adolescents, verification of the reliability and validity of assessment scales in different special groups is very necessary and useful (Kim et al., 2008).

Over the years, the MSPSS has been translated into many other languages such as Thai, Malaysian, Swedish, Polish, and demonstrated good reliability and validity (Duru, 2007; Ng et al., 2010; Wongpakaran and Wongpakaran, 2012; Adamczyk, 2013; Ekbäck et al., 2013). In addition, adequate psychometric properties of the MSPSS are also found in some special groups such as psychiatric patients, implantable cardioverter defibrillator patients, patients with heart failure (Cecil et al., 1995; Pedersen et al., 2009; Shumaker et al., 2017). All these results suggested that the MSPSS possessed good psychometric properties.

Another critical question when using the MSPSS is the measurement invariance across different gender groups. Prior studies have explored the difference in the MSPSS scores between fathers and mothers. For example, Ghorbani et al. (2014) found that the MSPSS scores of mothers of children with disabilities were lower than that of fathers. However, Simons et al. (2007) showed that there was no significant gender difference in the MSPSS scores. There may be a number of factors contributing to these differences, but before we discuss gender differences, we must first ensure that the MSPSS can measure the same latent factors across gender groups. Thus, another purpose of this research was to determine if the measurement structure underlying social support is equivalent across gender.

To address these issues, we firstly performed a CFA to test if the three-factor structure of the MSPSS can be replicated in Chinese parents of children with CP (N = 487). Secondly, we tested measurement invariance of MSPSS across gender groups by a multi-group CFA. Finally, we tested the concurrent validity of the Chinese version of the MSPSS in relation to parenting stress, which was selected due to their reliable negative relationship with social support (Jeong et al., 2013). We expected that perceived support from family, friends, and significant others will be inversely related to parenting stress.

We used the MSPSS and PSI-SF to measure social support and parenting stress respectively. The questionnaires were mailed to directors of medical institutes, children’s rehabilitation centers, and special education schools in mainland China. The directors were responsible for sending to the parents, and the inclusion criteria were as follows: (1) the child’s age was between 1 and 12 years and has been diagnosed with CP; (2) the parents were Chinese-speaking and could independently complete the questionnaires. All participants signed a written informed consent and were asked to complete a set of questionnaires anonymously and voluntarily. Only one parent in a same family was asked to fill in the questionnaires. In total, we distributed 520 questionnaires and received 487 (mother = 366, father = 121) valid questionnaires for a recovery rate of 93.7%. The mean age of the participated parents is 33.69 (standard deviation = 6.12), age range is 21–55 years. The current study was approved by the Research Ethics Board of the local university.

To measure social support, we used the Chinese version of the MSPSS. There are four items for each subscale of the Chinese MSPSS. A seven-point Likert scale is used (1 = very strongly disagree; 7 = very strongly agree). The complete scale ranges from 12 to 84. A higher score equates with higher social support. In this study, the Cronbach’s alpha coefficients of the family support (Items 3, 4, 8, 11), friend support (Items 6, 7, 9, 12), and significant-other support (Items 1, 2, 5, 10) subscales were 0.88, 0.89, and 0.87, respectively.

To test if the three-factor structure of the MSPSS can be replicated in Chinese parents of children with CP, a CFA was firstly performed using Amos 23.0. Because the Chi-Square is considered very sensitive to the sample size, the following indices were used to evaluate model fit: comparative fit index (CFI), non-normal fit index (NNFI, also known as Tucker–Lewis Index), root mean square error of approximation (RMSEA), and standardized root mean square residual (SRMR) (Hu and Bentler, 1999). Accordingly, an acceptable model fit is indicated by a CFI of >0.90, a NNFI of >0.90, a RMSEA of <0.08, and a SRMR of <0.08. Values of CFI and NNFI above 0.95 (Hoyle, 1995), RMSEA and SRMR < 0.06 (Maccallum et al., 1996) represent an excellent model fit.

Then, the configural, metric, and scalar invariance were selected to examine the measurement invariance of Chinese MSPSS across gender groups by a multi-group CFA. The difference for CFI and RMSEA (ΔCF and ΔRMSEA) were used as indices for tests of invariance. ΔCF and ΔRMSEA of equal to or <0.01 were considered strong invariance (Cheung and Rensvold, 2002; Kong, 2017).

In addition, the relationships among perceived social support from family, friends, and significant others with parenting stress were examined by Pearson correlations. And p < 0.05 was considered statistically significant. 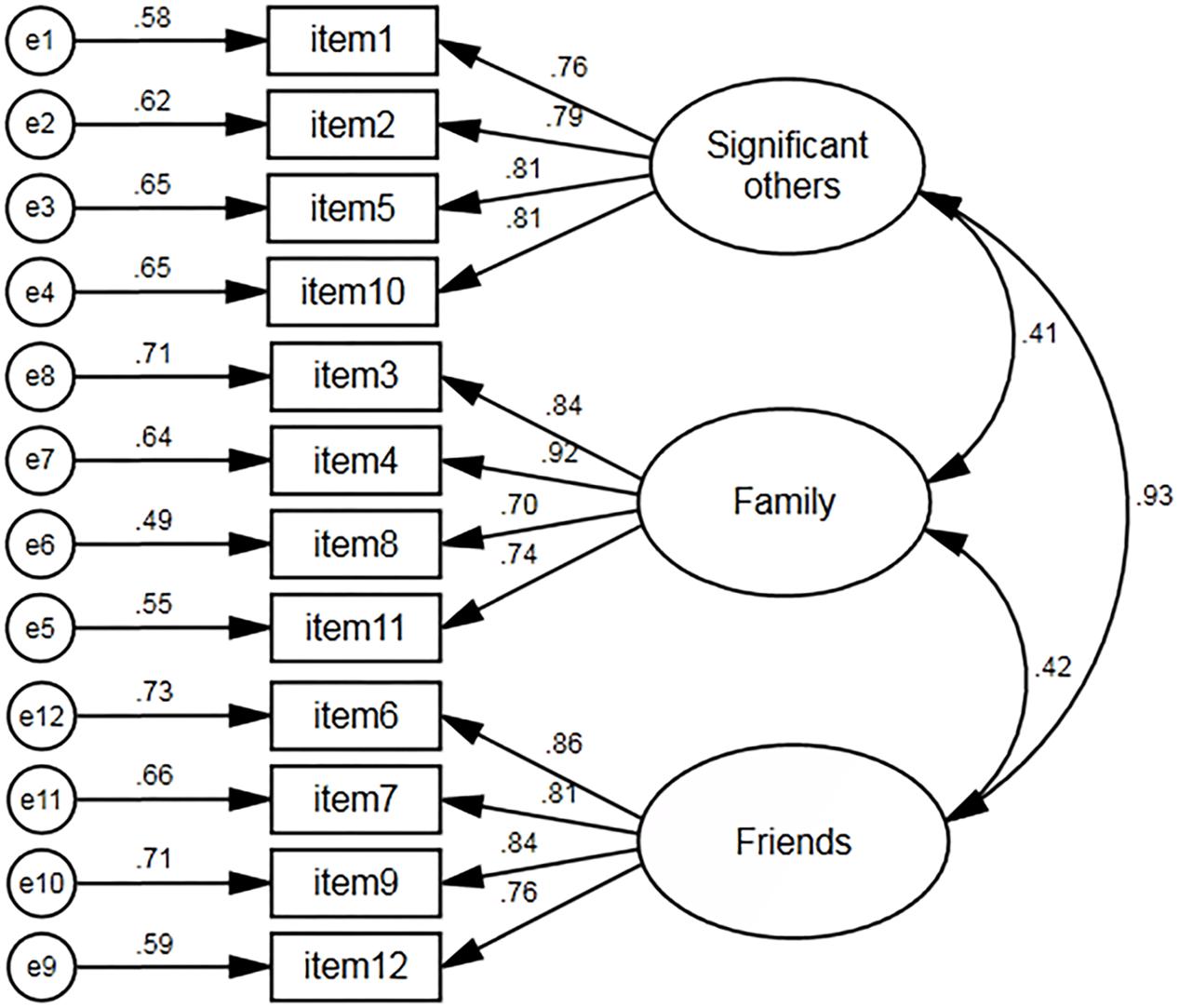 Configural invariance was first conducted to assess if the Chinese MSPSS has a three-factor structure for the gender groups. The result showed that the configural invariance model (M1) fitted the data very well, CFI = 0.967, RMSEA = 0.051 (Table 1), and all factor loading were significant (p < 0.05).

Scalar invariance implies invariance of item intercepts across groups. Finally, scalar invariance model (M3) was established to test the intercepts and factor loadings were constrained to be equal across the fathers and mothers, and the residual variances were freely estimated. The results showed the model fitted well, CFI = 0.962, RMSEA = 0.049 (Table 1). And no significant changes occurred when compared to the M2, ΔCFI = 0.003, ΔRMSEA = 0.001.

Taking these results together, it is suggested that configural, metric, and scalar invariance hold across gender groups.

Concurrent validity is a supporting piece of evidence for construct validity. Pearson correlations were conducted with the total sample to test the relationship among perceived social support from family, friends, and significant others with parenting stress to assess the concurrent validity between the Chinese version of MSPSS and PSI-SF subscales. The result showed that MSPSS was significant related with PSI-SF. The mean and standardized deviations of variables were presented in Table 2.

TABLE 2. Mean, SD, and correlation between the variables.

Besides, the Pearson’s correlation analysis revealed that the total MSPSS was significantly related to the total PSI-SF (r = –0.313, p < 0.01). This is consistent with the previous study on the relationship of MSPSS and PSI-SF for caregivers of children with developmental disabilities (r = –0.390, p < 0.01) (Peer, 2011). In addition, the three subscales of MSPSS were all significantly related to the three subscales of PSI-SF. The strong correlation between parenting stress and social support confirms that the Chinese version of the MSPSS has good concurrent validity.

In summary, the present findings suggest that the Chinese MSPSS displays adequate psychometric properties in terms of internal consistency, factor structure validity, and measurement invariance across gender in parents of children with CP, so it can be applied to these particular populations to measure perceived social support. The availability of the MSPSS might facilitate the examination of the relationship and causal mechanism involved in the link between perceived social support and mental health among Chinese parents of children with CP. Although the present study yielded the expected results, there were still some limitations that should be noted. Firstly, the samples used in the current study are all Chinese, so we cannot be sure that the factor structure and measurement invariance of MSPSS can be obtained in other language versions. Secondly, the study used only cross-sectional data, so we can’t confirm whether our results hold across different time periods.

We thank all the participants. This study was sponsored by Peak Discipline Construction Project of Education at East China Normal University; and the National Social Science Foundation Project in China (grant number 13AZD097) and the Fundamental Research Funds for the Central Universities (GK20170.090).

Copyright © 2017 Wang, Wan, Huang, Huang and Kong. This is an open-access article distributed under the terms of the Creative Commons Attribution License (CC BY). The use, distribution or reproduction in other forums is permitted, provided the original author(s) or licensor are credited and that the original publication in this journal is cited, in accordance with accepted academic practice. No use, distribution or reproduction is permitted which does not comply with these terms.