Gender effects will also be explored. Teenage girls are more likely to be concerned about their weight than boys (Sweeting and West, 2002) and young girls have a greater desire to be thin compared to boys (Lowes and Tiggemann, 2003). They might also be more realistic, and thus accurate in their perception of body size. This is supported by studies showing boys are more likely to underestimate their weight status than girls (Brug et al., 2006; Zhao et al., 2012; Cattelino et al., 2015; Veldhuis et al., 2017). However, findings are inconsistent with one study reporting that girls underestimate their body size to a higher degree than boys (2002), while others found no gender differences (Gardner et al., 1997; Kornilaki, 2015).

A letter of invitation together with the Strengths and Difficulties Questionnaire (SDQ), a brief behavioral screening questionnaire, 4–16 version (Goodman et al., 2000) was sent to parents of two cohorts of children (born in 2003 or 2004) (n = 3456) living in Trondheim, Norway. Parents who consented to participate brought the completed SDQ to the ordinary community health checkup for 4-year-olds, where the health-care nurse informed the parents about the study using procedures approved by the Regional Committee for Medical and Health Research Ethics. Parents with insufficient proficiency in Norwegian to fill out the SDQ screening were excluded (n = 176). 82.1% of all the eligible parents agreed to participate and gave written informed consent (Figure 1). To increase variability and statistical power, children with high SDQ scores were oversampled, whereas those with low scores were undersampled. The SDQ was used because the primary aim of the Trondheim Early Secure Study (TESS), which the current inquiry is embedded in, was to assess mental health. We divided the SDQ scores into four strata (cut-offs: 0–4, 5–8, 9–11, and 12–40) and selected defined proportions of parents in each stratum to participate using a random-number generator. The probability of selection increased with increasing SDQ scores (0.37, 0.48, 0.70, and 0.89 in the four strata, respectively). As seen in Figure 1, based on this procedure 1250 participant were drawn to participate and 997 of these presented at the university clinic with their child for further testing (2007–2009) and thus constitute the sample at baseline. At follow-up 2 years later (T2) (2009–2011), 795 children participated (mean age = 6.7 years, SD = 0.17), whereas 699 children took part in the study at age 8 (T3) (2011–2013) (mean age = 8.8 years, SD = 0.24) and 702 at age 10 (T4) (2013–2015) (mean age = 10.51 years, SD = 0.17). The sample was comparable with the Norwegian parent population with regard to the parents’ level of education (Statistics Norway, 2012) and children’s BMI (Juliusson et al., 2013). Because body size estimations were included from T2 onward, the current inquiry uses data from T2 (6 years), T3 (8 years), and T4 (10 years) only. At T2, 50.3% of the participants were girls, mean BMI for the whole sample was 15.63 (95% CI = 15.43–15.69); 3.8% were categorized as overweight and 0.2% were obese according to the International Obesity Task Force cutoffs (IOTF) (International Obesity Task Force, 2011). Attrition analyses revealed that drop out was not predicted by gender, BMI, or estimation of body size. 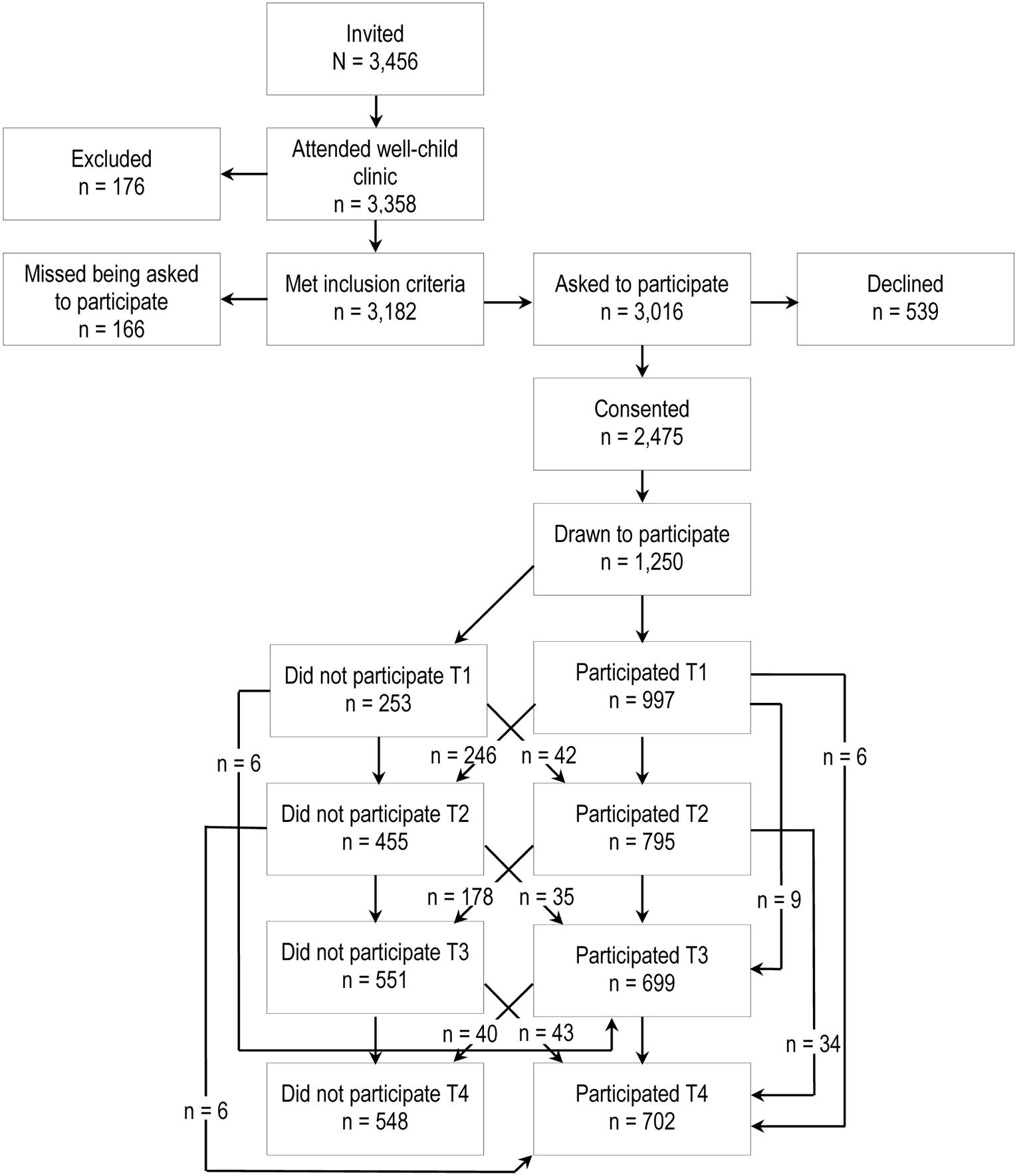 Body size estimation was measured at all three time points using the Children’s Body Image Scale (CBIS), a figure rating scale validated for both genders (Truby and Paxton, 2002). The children were tested without the parents present. The measure was administrated by trained personnel with at least a bachelor’s degree in a relevant field and substantial practice in working with children and families. CBIS was developed for use in children aged 7 to 12, but has been successfully used with children as young as 5 years old (O’Connor et al., 2015). The scale, one for each gender, includes seven photographs of different body sizes. Every figure represents a defined BMI range, from picture one, the lowest BMI category (BMI = 14.0–14.6 for boys, 13.0–13.5 for girls) to picture seven, the highest BMI category (BMI = 28.5–29.0 for boys, 24.7–28.5 for girls). The child is asked to “select the photograph most similar to your own body size.” The discrepancy between actual body size and perceived body size is calculated by subtracting the number of the selected picture (e.g., 1) from the picture matching the child’s actual BMI (e.g., 7), thus the outcome have a possible range from -6 to +6. Based on this range, we categorized the scores from -2 to -6 as underestimation and from 2 to 6 as overestimation. Although the CBIS has good test–retest reliability (Truby and Paxton, 2008), a certain level of imprecision in children’s estimations is expected (Truby and Paxton, 2002). More specifically, if a child’s BMI falls close to the border of a pictorial category it would be of low relevance whether they chose the correct picture or the picture representing the bordering category. We therefore set the criteria for correct body size estimation to include one picture above or below the correct picture, i.e., -1 to 1.

Digital scales were used to measure weight (Tanita BC420MA) and height (Heightronic digital stadiometer: QuickMedical, Model 235A) at all measurement points. Correction for light indoor clothing (0.5 kg for children) was applied. BMI was calculated (Cole et al., 1995). According to Cole et al. (2005), BMI is preferable in longitudinal designs, whereas BMI-z-score is optimal for cross-sectional assessments.

TABLE 1. Prevalence of boys and girls who underestimate, correctly estimate, or overestimate their body size at ages 6, 8, and 10.

Analyses were performed in Mplus 7.4 (Muthèn and Muthèn, 1998–2010) using a robust maximum likelihood. Missing data were handled according to a full information maximum likelihood (FIML) procedure, which is considered to be state of the art and produces more correct estimates than complete case analysis (Schafer and Graham, 2002). FIML implies that analyses are performed on all available data, provided that cases have at least some values for the dependent variables (i.e., body size estimation at ages 6, 8, and 10). The analysis sample was therefore n = 793. Because we used a screen-stratified sample weighting according to a factor proportional to the number of children in the stratum divided by the number of children in that stratum was applied (i.e., undersampled children – those with low SDQ scores – were weighted up, whereas oversampled children – those with high SDQ scores – were weighted down) to provide accurate population estimates.

BMI as a Predictor of Stability in Underestimation

Individual stability in underestimation was significant, but modest from ages 6 to 8 and 8 to 10, although the stability significantly increased with age. Our findings accord with those of Gardner et al., 1999a, who reported low test–retest consistency of body size estimation using a video-adjustment technique in a sample of children aged 6–12, followed up annually for 3 years. The rate of over and underestimation at age 6 and the low test–retest concur with a view that body size estimation is not yet firmly established during the first school years. Hence, reliability is expected to be low and it is therefore not surprising that stability is modest, especially over longer periods, i.e., in our case 2 years. Increasing awareness with age, and thus increasing reliability, however, should be reflected in increasing stability; also concurring with our results.

Our study adds to earlier cross-sectional research (Maximova et al., 2008; Bodde et al., 2014) and one prospective study with a 1-year follow-up (Allen et al., 2008) by showing that higher BMI predicts future underestimation. Underestimation could be seen as an adaptive mechanism. Not acknowledging your own overweight may help protect against psychosocial consequences of obesity (Armstrong et al., 2014). In support of this view, research shows that overweight or obese youth who accurately perceive their weight are more likely to be depressed (Gray et al., 2012) and report more psychological distress (Xie et al., 2011) compared to those who not see themselves as overweight.

Our study is the first to demonstrate that underestimation does not constitute a risk factor for weight gain in middle childhood, as has previously been shown in adolescents and adults (Liechty and Lee, 2015; Robinson et al., 2015). Overall, our findings extend earlier cross-sectional research by suggesting that the association between underestimation and weight status is due to the effect of weight on underestimation, not the other way around. Thus, although underestimation of body-size is considered a potential barrier to obtain a healthy weight, our findings indicate that it is not so in normally developing children. A potential implication of these findings is that there may be no reason to promote a more correct perception of body size in healthy children who underestimate, at least not in order to prevent future excessive weight gain. However, it is not known whether this also applies to children with overweight or obesity.

At ages 6 and 8, about two thirds of both boys and girls correctly estimated their body size; comparable proportions to those found in earlier research (Gardner et al., 1999b; Saxton et al., 2009). However, at 10 years of age only 41% of boys accurately estimated their body size, compared with 68% of girls. Others also report boys to be less accurate than girls (2008), although some studies report no gender difference in the accuracy of body size estimation (Gardner et al., 1997; Kornilaki, 2015). We found more boys than girls underestimated their body size at ages 8 and 10. In a sample consisting of 199 children under the age of 10, Truby and Paxton (2002) report boys to be less likely to underestimate their body size compared to girls, but studies of weight perception applying larger samples do report that boys are more likely to underestimate than girls (Zhao et al., 2012). Nevertheless, further research is needed before firm conclusions can be drawn regarding gender differences in body size estimation.

Although more boys than girls were found to underestimate as they age, the individual stability in underestimation did not differ between the genders. Moreover, there was no gender difference in the effect of BMI on underestimation. These results suggest the mechanisms of underestimation are not gender specific.

The longitudinal design, the large, population-representative sample, and objectively measured height and weight are strengths of the current study. Notably however, several individual and environmental factors not examined in our study may also affect children’s underestimation of body size. For example, research shows greater schoolmate BMI to be significantly associated with underestimation of weight status among children and adolescent (Maximova et al., 2008), and common genetics cannot be ruled out. Further, because the present sample consists of Caucasian children, as do earlier studies applying CBIS (Truby and Paxton, 2008), caution should be applied in generalizing the findings to other ethnic groups and cultures for whom body ideals may vary (Gordon et al., 2010). Future studies should aim to replicate the findings in divergent samples of school aged children, also among overweight and obese.

SS and LW were responsible for the study concept and design. SS carried out initial analysis and drafted the manuscript based on input from PK, SLR and AF. SS, LW, and CK conducted the statistical analysis, whereas LW obtained funding. All authors contributed to the interpretation of data, critically revised the manuscript for important intellectual content, approved the final manuscript as submitted and agreed to be accountable for all aspects of the work.

This work was supported by the Research Council of Norway, grant number 213793.

Copyright © 2017 Steinsbekk, Klöckner, Fildes, Kristoffersen, Rognsås and Wichstrøm. This is an open-access article distributed under the terms of the Creative Commons Attribution License (CC BY). The use, distribution or reproduction in other forums is permitted, provided the original author(s) or licensor are credited and that the original publication in this journal is cited, in accordance with accepted academic practice. No use, distribution or reproduction is permitted which does not comply with these terms.