Many elderly people with cognitive dysfunction may observe a decrease in their health levels and quality of life (QOL). The basic concept of QOL consists of several categories including physical functions and mental health. The QOL domain that is most important for elderly people is physical health and, to a lesser extent, psychological health, social relationships, and/ or the environment. Our aim was to explore the relationships between the subjective measure of QOL, an abbreviated version of the World Health Organization Quality of Life (WHOQOL-BREF) scale, and the objective measure of impairment, Clinical Dementia Rating (CDR), among elderly people in a community. Totally, 178 community dwellers aged 75 years and above agreed to participate and completed the WHOQOL-BREF; 66 (32 males, 34 females) scored a CDR of 0 (healthy), 86 (33, 53) scored a CDR of 0.5 (questionable dementia or very mild dementia), and 26 (12, 14) scored a CDR of 1 and above (dementia). According to Pearson’s correlation coefficient analysis (significance level, p < 0.05), the physical domain of the WHOQOL-BREF had significant statistical negative correlations with all CDR subscales. The CDR subscale of memory impairment had a significant statistical negative correlation with the WHOQOL-BREF subscales of the physical (r = -0.151, p = 0.044) and psychological (r = -0.232, p < 0.002) domains. The CDR subscale of home and hobbies impairment had significant statistical negative correlations with all WHOQOL-BREF subscales including the physical (r = -0.226, p = 0.002), psychological (r = -0.226, p = 0.002), social (r = -0.167, p = 0.026), and environmental (r = -0.204, p = 0.006) domains. Patients with very mild dementia may confuse cognitive impairment and physical disabilities. In the future, we need to systematically combine memory clinics and all departments related to the elderly for the successful early detection and rehabilitation of, and long-term care for, dementia.

Many elderly people who have cognitive dysfunction may notice a decrease in their health levels and quality of life (QOL). The World Health Organization (WHO) (2017a) defines health as “a state of complete physical, mental, and social well-being and not merely the absence of disease or infirmity.” In addition, it defines QOL as “an individual’s perception of their position in life in the context of the culture and value systems in which they live and in relation to their goals, expectations, standards and concerns” (The World Health Organization [WHO], 2017b). The basic concept of QOL consists of several categories including physical functions and mental health. However, actual health-related QOL among the elderly is a complex problem since most elderly people have several complicated chronic diseases and suffer from decreased physical functions as a result of aging.

In elderly people, cognitive impairments may affect their poor QOL in everyday life. We need to study the relationship between cognitive impairments and QOL in the daily activities of the elderly. To assess the severity of clinical dementia in the daily activities of the elderly, the Clinical Dementia Rating (CDR) scale is widely used. It is a semi-structured interview scale with six domains and five impairment levels (Hughes et al., 1982; Morris, 1993). The CDR scoring includes an interview by a physician and a clinical examination, as well as observations by family members. In this study, public health nurses visited subjects’ homes to evaluate their daily activities. A CDR of 0.5 (Hughes et al., 1982; Morris, 1993) or mild cognitive impairment (MCI) (Petersen et al., 1999; Petersen, 2004) is the boundary and transitional state between normality and dementia. A CDR of 0.5 is comparable to questionable dementia (Hughes et al., 1982; Morris, 1993). People with a CDR of 0.5 have some neuropsychological impairments, such as loss of memory, decline in executive function (Hashimoto et al., 2004; Nakata et al., 2009; Kasai et al., 2012), and apathy (Nakamura et al., 2013). In older adults with very mild Alzheimer’s disease, subjective complaints of dementia are not always amnesia. According to previous studies, older adults with MCI expressed subjective complaints of disturbed social activity (Meguro et al., 2004). Another objective observation study’s findings revealed impaired instrumental activities of daily living (IADL) in females (Ouchi et al., 2012, 2016). Such disturbed social activities were suspected of being associated with impaired QOL.

The abbreviated version of the World Health Organization Quality of Life (WHOQOL-BREF) scale is a brief questionnaire used to assess international cross-culturally-comparable QOL among young and elderly people, consisting of physical health, psychological health, social relationships, and environment domains (The WHOQOL Group, 1998; Saxena et al., 2001; Tazaki and Nakane, 2007). Lucas-Carrasco et al. (2011) reported that the WHOQOL-BREF had good reliability and validity for dementia. In a previous study of QOL in subjects with MCI, using the WHOQOL-BREF, Muangpaisan et al. (2008) reported that MCI patients had significantly lower psychological QOL than normal subjects. The QOL domain that is most important for elderly people is physical health followed by, to a lesser extent, psychological health, social relationships, and/or the environment.

Both CDR and WHOQOL-BREF are standardized scales to assess the everyday life of elderly people with dementia (Hughes et al., 1982; Morris, 1993; Lucas-Carrasco et al., 2011). CDR is a scale of objective cognitive impairments such as memory and home and hobbies impairments in daily living (Hughes et al., 1982; Morris, 1993), while the WHOQOL-BREF is an assessment of subjective QOL such as the physical and psychological domains of everyday life (The WHOQOL Group, 1998; Saxena et al., 2001; Tazaki and Nakane, 2007).

However, the relationship between objective cognitive impairments and subjective QOL, which includes physical, psychological, social, and environmental domains, has so far not been investigated in cases of very mild dementia. Our aim was to explore the relationships between the subjective measure (WHOQOL-BREF) and the objective measure (CDR) among elderly people in a community to contribute to the early detection of dementia and to identify the most important QOL domain among elderly people in Japan.

A clinical team comprised of skilled physicians (three neurologists and a psychiatrist) and skilled public health nurses determined the CDR for each participant (Hughes et al., 1982; Morris, 1993) and were blinded to the cognitive test results. They used the Japanese version of the questionnaire of the CDR scoring sheet (Meguro, 2008). The CDR contains six subscales: memory, orientation, judgment and problem solving, community affairs, home and hobbies, and personal care. Before the interviews with the physicians, the public health nurses visited the participants’ homes to evaluate their daily activities. Observations by family members regarding the participants’ lives were described in a semi-structured questionnaire. Participants who lived alone were visited frequently by public health nurses to evaluate their daily lives. The physicians then interviewed the participants to assess their episodic memory, orientation, and judgment. Finally, with reference to the information provided by the family members, the CDR for each of the participants was determined at a joint meeting of the physicians and public health nurses. One author (KM) was certified as a CDR rater by the Knight Alzheimer’s Disease Research Center’s Memory and Aging Project at the Washington University School of Medicine.

We analyzed the relationships between the six CDR subscales and the four WHOQOL-BREF subscales using Pearson’s correlation coefficient, which was two-tailed, with differences reported as significant if p < 0.05. We used the IBM SPSS statistics version 22 software (IBM, Corp., Armonk, NY, United States) for all statistical analyses in this study.

Written informed consent was obtained from each of the participants and their families. The study was approved by the ethical committees of the Tome City government and Tohoku University Graduate School of Medicine.

TABLE 2. The relationships between the WHOQOL-BREF subscales and the CDR subscales.

These results can be interpreted in two ways. The first is that Japanese elderly people may confuse objective cognitive impairments with subjective physical health. The second is that the objective home and hobbies impairment affects all categories of QOL in the elderly. Age may be a factor that may affect these correlations. Since our study population was limited to one age cohort aged 75 years or above, we did not choose age as a factor in this study. 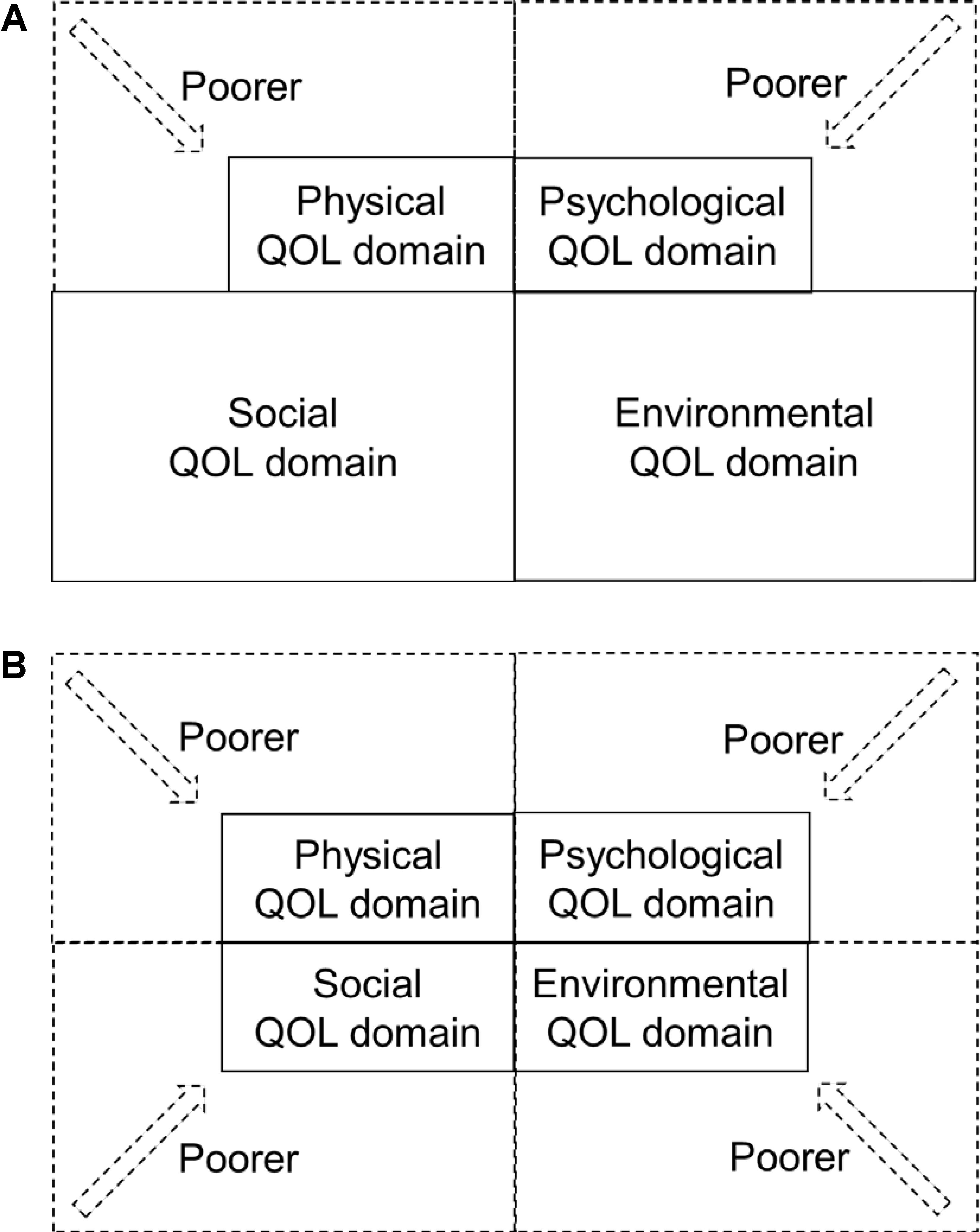 An additional hypothesis is that people with very mild or mild dementia may have “anosognosia” or an “over or under estimation of true cognitive impairment” with an imbalance between subjective and objective cognitive complaints, especially in patients with vascular dementia (Tezuka et al., 2013). Elderly people with dementia may misunderstand matters concerning their cognitive and physical impairments. This may be related to the Dunning–Kruger effect. The Dunning–Kruger effect is a term used in connection with an imperfect self-assessment based on the metacognitive deficits (Kruger and Dunning, 1999). People with cognitive impairments may not be aware of their disabilities, therefore self-awareness is required to recognize impairments. Another studies need to investigate the neural basis of the mechanism underlying disabilities of behavior and the subjective and objective awareness of cognitive impairment.

In the future, another studies need to develop and systematically combine memory clinics and all departments related to the elderly, including orthopedics, for the successful early detection and rehabilitation of, and long-term care for, dementia. We also need international comparison studies on people with dementia in terms of their objective and subjective cognitive impairments.

This work was supported by Commissioned research fund by the city of Tome.

We are grateful to all the staff at Tome City, especially to the public health nurses, and the staff at the Division of Geriatric Behavioral Neurology, Cyclotron and Radioisotope Center, Tohoku University. In particular, we thank Drs. Kyoko Akanuma, Kei Nakamura, Masanori Chiba, Sergio Ramón Gutiérrez Ubeda, Masahiro Nakatsuka, and Takashi Seki; Mrs. Keiichi Kumai and Jiro Oonuma; and Mses. Yuka Kato, Keiko Chida, Yuriko Kato, and Konomi Takahashi. We would like to thank Editage (www.editage.jp) for English language editing.

Copyright © 2018 Kasai and Meguro. This is an open-access article distributed under the terms of the Creative Commons Attribution License (CC BY). The use, distribution or reproduction in other forums is permitted, provided the original author(s) and the copyright owner are credited and that the original publication in this journal is cited, in accordance with accepted academic practice. No use, distribution or reproduction is permitted which does not comply with these terms.