Nicewander and Thomasson (1999) applied Arithmetic, Harmonic, and Jensen's inequality methods to marginalize test information for estimating IRT reliability estimates in computerized adaptive testing (CAT). However, the items were drawn from item banks containing an average of 80 items per test, which were longer than practical CAT set up. In addition, many practical assessment programs often used interchangeably three IRT reliabilities (Arithmetic, Harmonic, and Jensen's inequality) in CAT. Therefore, the purpose of this brief report was to compare three methods of calculating marginalizing observed standard error (OSE) that can be expressed by the inverse of the test information function to estimate CAT reliabilities under varied test lengths. True reliability in classical test theory (CTT) is defined as the consistency or reproducibility of test score results, which is equivalent to the squared correlation between the true score (T) and the observed score (X), and the squared correlation between observed scores from two parallel-forms (X and X′), (Crocker and Algina, 1986). Likewise, from the IRT perspective, θs are considered as true scores and s are considered as observed scores. Therefore, true reliability in IRT can be defined as the squared correlation between θs and , . The mathematical form of the three-parameter logistic model (3PLM; Bock and Lieberman, 1970) is written as:

where is the variance of for all examinees and is the mean of squared OSE for .

OSE can be computed by taking inverse of squared root of second derivative of likelihood function whenθ is estimated by MLE or MAP. The OSE is described as

Based on Equation (5), this report applied three methods of marginalizing the variance of OSE () for each examinee to estimate CAT reliability.

(1) arithmetic mean: was used to approximate CAT reliability as below:

Note that, if is the maximum likelihood estimate for each θ, then will have a normal distribution with mean θ and asymptotical variance, 1/I(θ), where I(θ) is the test information function for each examinee based on IRT model (Samejima, 1994). In CAT, each examinee's θ has been estimated by different item pools so that is described for each examinee as below

and remind that we assume E(e) = 0, and then mean of can be expressed by the mean of 1/ as follows:

As a result, the mean of is actually approximated (Samejima, 1994). As

(2) harmonic mean: was used to approximate the mean variance of OSE, the second type of reliability can be approximated as below:

, where is the OSE with , was used to marginalize . As a result, the third type of reliability can be approximated as below:

The item pool was created from the Emergency Medical Technician (EMT) exams administrated from 1/1/2013 to 9/1/2014. Based on the EMT practice analysis, 17~21% items of the test were assigned to Airway, Respiration, and Ventilation (ARV),16~20% items were assigned to Cardiology & Resuscitation (CR), 19~23% items were assigned to Trauma (TRA), 27~31% were assigned to Obstetrics and Gynecology (MOG) content, and 12%~16% were assigned to EMS operations (OPS) contents. The EMT operational item pool was composed of items that were previously calibrated using data from the paper-and-pencil tests and new items that were filed as tested in a previous CAT. The item pool has 1,136 items. The mean of item difficulty parameters for the item pool was 0.969. The item selection algorithm and content-balanced procedure proposed by Kingsbury and Zara (1989) was applied to this study. The CAT algorithm randomly selects the content area during the first 5 items and then content area that is most divergent from targeted percentage is selected next to meet the test plan (Kingsbury and Zara, 1989).

The dichotomous IRT model (Bock and Lieberman, 1970) was applied to generate item responses with three examinee populations [N(0,1), N(1,1), and N(2,1)]. The a-parameters were generated from the mean of 1.0 and SD of 0.2 with D = 1.7, and b-parameter was from the item pool in 2PLM conditions, and c-parameter was set to 0.25 to evaluate the 3PLM conditions. To generate responses for each test, IRT model-based probabilities were compared to random numbers from a uniform distribution to obtain the item responses for each examinee. If the model-based probability was greater than the random number, the response to that item was recorded as correct (1). Otherwise, the item response was recorded as incorrect (0). This process was repeated for each item and examinee to obtain the full item response matrix for each item pool. A total of 1,000 examinees for each pool were generated with true θs following N(0,1), N(1,1), and N(2,1) using D = 1.7. In Figure 1A condition describes 2PL model with θs following N(0,1), (Figure 1B) condition describes 2PL model with θs following N(1,1), (Figure 1C) condition represents 2PL model with θs following N(2,1), and (Figure 1D) condition is designed for 3PL model with θs following N(0,1). For CAT termination, the fixed test length termination criteria were varied from 10 to 60 items within 1,136 item pool. To estimate stable CAT reliability estimates, each pool was replicated 100 times and average empirical reliabilities were calculated for each condition. Then average reliability was plotted as the fixed test length termination criteria were increased from 10 to 60 items. s and OSE of 1,000 examinees were estimated using MLE method. The “true” IRT reliabilities were computed as the squared correlation between the θ sand s(). The three empirical CAT reliabilities were obtained using arithmetic mean, harmonic mean, and Jensen's inequality respectively. Ability estimates were calculated using a Bayesian procedure until at least one item was answered correctly and one item was answered incorrectly. At that point, the ability estimates were calculated using MLE method. The Newton-Raphson procedure identified the maximum of the likelihood using an iterative procedure to estimate θ for MLE method. The Newton-Raphson iterations continued until the incremental change in became less than the criterion of 0.001. Maximum Fisher information(MFI) was used as an item selection method in this study. MFI selects the next item that provides the maximum Fisher information at . All CAT algorithms for this study were implemented by a “catR” package (Magis and Raiche, 2012) in the R program (R Development Core Team, 2008). 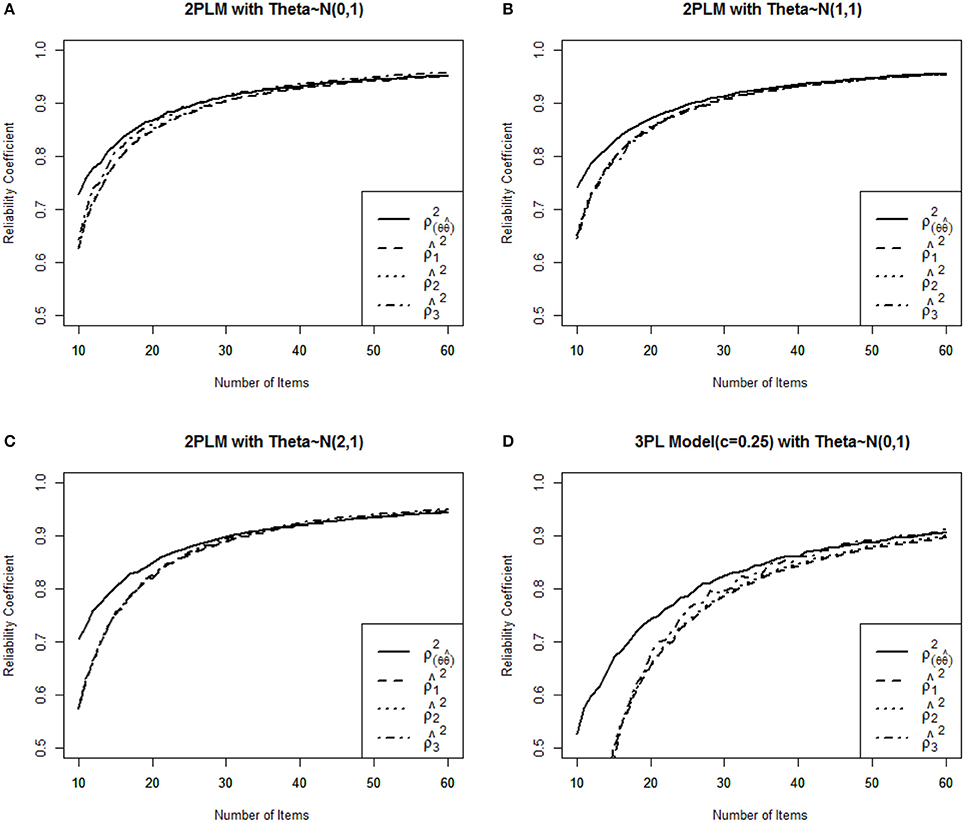 In summary, although reporting all three reliability estimates would be suggested regardless of any ability population distribution, is recommended for computing CAT reliability when mean of ability population distribution is 0 because was closer to true reliability even if small number of items was administered and it can be computed easily by using a single test information value at θ = 0 in this study. In usual, a CAT was known as efficient and compared to a fixed-form test. However, a small fixed number of items was not suggested as a CAT termination criterion for 2PLM, specifically for 3PLM, in order to maintain high reliability estimates.

As with any research, this study has some limitations. This study examined the accuracy of CAT reliabilities under specific conditions for a medical licensing examination. Thus, there is a limitation to generalize this result to other testing conditions. Future studies would be needed to investigate the accuracy of CAT reliabilities under various conditions such as different ability distributions and item banks with different item parameter conditions.

DS is the first author who conceptualize and write this brief research report and SJ is the corresponding author who manages this research project.

Copyright © 2018 Seo and Jung. This is an open-access article distributed under the terms of the Creative Commons Attribution License (CC BY). The use, distribution or reproduction in other forums is permitted, provided the original author(s) and the copyright owner are credited and that the original publication in this journal is cited, in accordance with accepted academic practice. No use, distribution or reproduction is permitted which does not comply with these terms.