General and Life-Domain Procrastination in Highly Educated Adults in Israel

Procrastination is a common behavior in contemporary societies (Ferrari, 2010). It is believed to be a personality characteristic or a behavioral tendency that is associated with a variety of personal and situational determinants. Procrastination is often conceptualized as the voluntary delay of important and necessary tasks, despite knowing that one will be worse off for doing so (Steel and Klingsieck, 2016). This behavior was found to be associated with many personal, cognitive, emotional, and motivational factors that often lead to a somewhat fragmented representation of this behavior (Rebetez et al., 2015). However, possible outcomes of these delays have been associated with many negative consequences, including mental and physical health problems, ability to achieve academic and career goals and financial well-being (Steel, 2007). Over the years, procrastination was studied mostly in young college students attending academic settings, and was suggested to be strongly associated with a self-regulation failure in face of temptations (Steel, 2007). Further, it was suggested to be a mechanism to avoid difficult tasks, academic failure, anxiety provoking situations as well as a short-term mood-regulation strategy, the inability to delay gratification, a time management problem or a “last-minute” thrill experience (Rice et al., 2012; Grunschel et al., 2013, 2016; Sirois and Pychyl, 2013; Dunn, 2014; Malatincová, 2015; Lowinger et al., 2016).

The nature of procrastination in older adults was studied from different angels (Ferrari et al., 2007; Tibbett and Ferrari, 2015). Epidemiological studies in English speaking countries, in Germany, Turkey, and six Spanish talking countries indicated that people procrastinate less as they age, when they are educated, married, have a job and reside in countries with higher levels of self-discipline (Ferrari et al., 2005b, 2007, 2009b; Gröpel and Steel, 2008; Steel and Ferrari, 2013; Beutel et al., 2016). Further, it was revealed that procrastination in older adults is associated with emotional variables such as life regrets (Ferrari et al., 2009a), perceived stress, distress (depression, anxiety, fatigue), and reduced life satisfaction across a broad set of life-domains (Beutel et al., 2016). Health related variables such as: lack of energy (Gröpel and Steel, 2008), hypertension and Cardiovascular disease (Sirois, 2015), and low social well-being (Steel, 2010) were indicated as well.

As timely performance is a requirement of most jobs, procrastination may be particularly problematic in the workplace (van Eerde, 2016). (Malachowski 2005) estimated that the average employee loses 2 h of each work day to such time-wasting activities as surfing the Internet for personal use and socializing with colleagues, resulting in a salary loss of $759 billion per year in the American workforce alone. Studies that explored the antecedents of procrastination in the workplace observed procrastination to be partially related to occupational stressors, including psychological detachment and fatigue (DeArmond et al., 2014), negatively associated with future time orientation, and positively associated with present-fatalistic time orientation (Gupta et al., 2012). Other studies explored job characteristics related to procrastination and suggested that people tend to procrastinate on tasks that are not stimulating or unpleasant or difficult or tasks that are imposed upon them (Blunt and Pychyl, 2005).

3. In how many life-domains did the respondents state that they experience high procrastination?

4. What are the relationship between life-domain procrastination and the general tendency to procrastinate?

5. In which life-domains do respondents perceive their procrastination as the most influential on their lives?

The sample consisted of 430 Israeli adults in the age range from 26 to 70 (M = 43.41, SD = 11.13). Seventy percent of the sample was female; approximately 82% stated that they are married and 58% are secular. All participants reported that they are employed and 75% of them are full-time workers. In an attempt to explore life-domain procrastination in highly educated adults, the inclusion criterion required that participants have some college degree. The sample included participants from free professions (such as school teachers, psychologists, engineers, computer programmers, medical doctors and nurses, mean years of education = 18, SD = 3), 80% of the sample were residents of urban areas.

Recruitment of participants was conducted by an Israeli online data collection company, which employs a panel of over 100,000 participants representing the total Israeli Jewish population (www.ipanel.co.il). The questionnaire was distributed online using Qualtrics software (www.qualtrics.com). The recipients who received the link to the survey were first directed to a page containing an informed consent letter; they were required to provide their informed consent before proceeding to the survey itself.

In addition, we measured the general tendency to procrastinate, using the Adult Inventory of Procrastination (AIP; McCown and Johnson, 1989), which is a 15-item, 5-point Likert scale (from 1 = false for me to 5 = true for me) that included items such as “I do not get things done on time” and “I am not good at meeting deadlines.” Previous studies reported that the AIP was a valid and reliable measure of behavioral procrastination with a Cronbach's alpha reliability of 0.79–0.83 and a test-retest reliability score of 0.71 (Ferrari, 1994; Ferrari et al., 1995). For the current study, we calculated a mean score of the AIP items (α = 0.88). 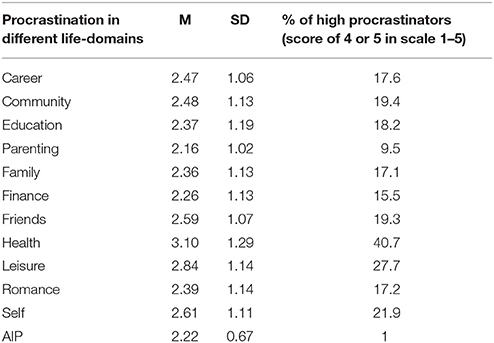 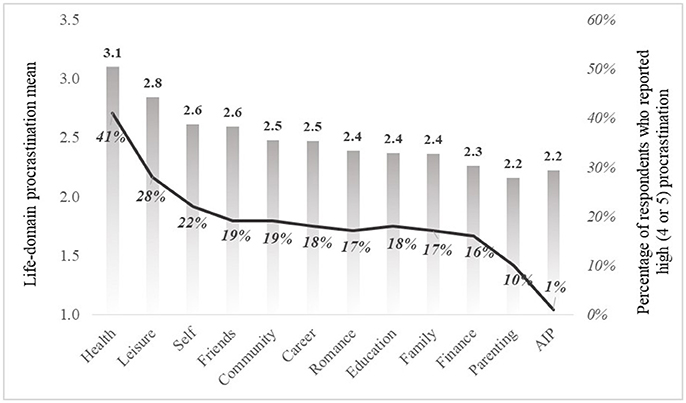 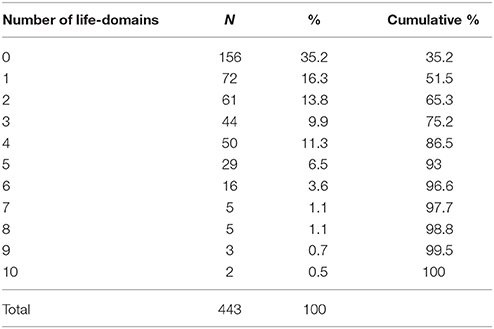 Table 2. Distribution of number of life-domains (out of 11) reported as highly procrastinated (4 or 5 on the scale of 1–5). 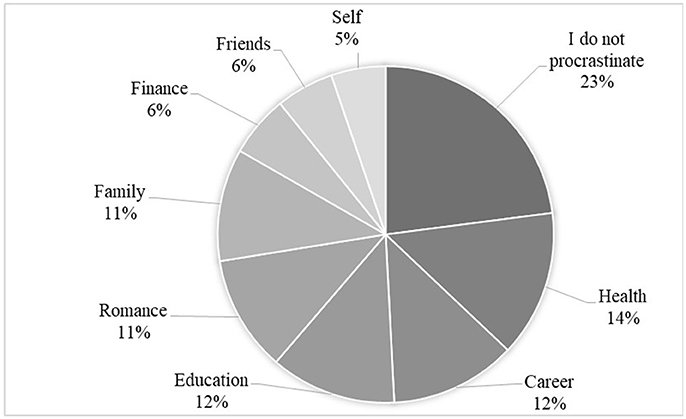 Figure 2. Distribution of life-domains that respondents chosen as most influencing on their lives (open-ended question).

Our results further indicated that about 25% of our respondents reported high procrastination in 4 and more life-domains. This finding may to some degree reflect or support other findings that suggest the existence of chronic procrastination in about 20–25% adults in Western cultures (Harriott and Ferrari, 1996). We did not specifically measure chronic procrastination, but from interpreting the literature, it seems that people, who highly procrastinate in four and more life domains, may present a chronic pattern (Díaz-Morales et al., 2008). In addition our results show that the general tendency to procrastinate was moderately associated with three life-domains: Career, Education, and Finance, that seem to reflect the achievement oriented life-domains, and maybe suggest that the general tendency to procrastinate is a behavioral tendency that mostly reflects the ability to socially or timely perform (Steel, 2010). Therefore, in those life-domains that highly educated adults are not required to socially perform, their life-domain procrastination pattern seems to be is somewhat different.

As with any study, the present study may present with potential limitations that are worth acknowledging. First, the use of self-report questionnaires may be accompanied by possible associated biases (e.g., social desirability biases, short-term recall biases, etc.). Second, we used a single-item to represent each life domain. Although some authors suggest that single-item measures may suffice (Wanous et al., 1997; Drolet and Morrison, 2001; Bergkvist and Rossiter, 2007), others argue that constructs with at least two items are considered as reliable and valid (Yong and Pearce, 2013). Therefore, future studies are advised to measure life-domain procrastination using instruments where each life-domain would be represented by several items. Third, we applied a non-probability sampling strategy for this study, resulting by several biases, such as over-representation of female population and of some professions in the sample. In order to examine the generalizability of the results, it would be helpful for future research to utilize larger random samples drawn from different populations and different countries. Fourth, while we were interested in procrastination patterns from the life-span perspective, we did not test them over time and used a cross-sectional design that does not allow examining the results in a time perspective. In order to better understand procrastination patterns and whether and how they change, future research should apply a longitudinal design. Despite these limitations, the findings of this study support the life-domain specificity of procrastination in adults. By that, they encourage the differentiation between procrastination in different life-domains in the terms of theoretical approaches, diagnostic tools, and intervention programs. Our findings clearly indicate that further research to differentiate adult procrastination's specific characteristics in various life-domains needs to be the goal of future studies.

This study was carried out in accordance with the recommendations of Tel-Hai Academic College Ethics committee with written informed consent from all subjects. All subjects gave written informed consent in accordance with the Declaration of Helsinki. The protocol was approved by the Tel-Hai Academic College Ethics committee.

Ferrari, J. R., O'Callahan, J., and Newbegin, I. (2005b). Prevelance of procrastination in the United States, United Kingdom, and Australia: arousal and avoidance delays in adults. North Am. J. Psychol. 7, 2–6. 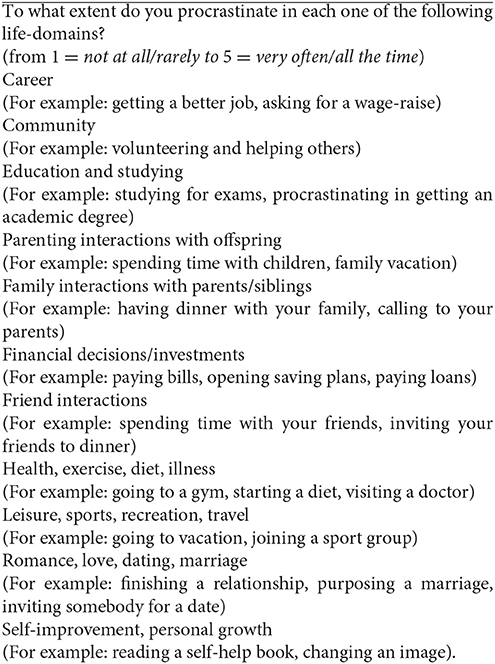 Copyright © 2018 Hen and Goroshit. This is an open-access article distributed under the terms of the Creative Commons Attribution License (CC BY). The use, distribution or reproduction in other forums is permitted, provided the original author(s) and the copyright owner(s) are credited and that the original publication in this journal is cited, in accordance with accepted academic practice. No use, distribution or reproduction is permitted which does not comply with these terms.