Decision-Making Based on Social Conventional Rules by Elderly People

Japan is confronting a rapidly-aging society. In 2015, the aging rate of the population (the ratio of people that are 65 years or older compared to the total population) was 26.8%. This figure is estimated to reach approximately 30% and 40% in 2025 and 2060 respectively (National Institute of Population and Social Security Research, 2012). Criminal activities targeting the elderly have increased with the increase in the aging rate of the population. This is especially true of bank transfer frauds in which an estimated 86.1% of the victims are at least 65 years old (Cabinet Office, Government of Japan, 2014).

Moreover, older adults are more likely to make inferences based on conventional social rules when reading moral stories than younger adults (Haidt, 2003). It is unclear whether the characteristics of a protagonist, such as “Yoko-san is kind to her mother,” or behavioral information, such as “She tasted the sweet azuki (sweet red-bean) soup and gave it to her mother,” are used by older adults in their interpersonal decision-making processes of narrative comprehension. Therefore, this study focused on “good” and “bad” judgments regarding narrative story protagonists.

People tend to invent post-hoc reasons for conflicting intuitions that arise in their daily experience (Nisbett and Wilson, 1977; Haidt, 2003). Therefore, the present study examined the effect of the congruency or incongruence between traits (as a characteristic) and behaviors on decision making, as well as the separate effects of traits and behavioral inferences, by creating discrepancies in information that resembled situations of social conflict. We developed novel stories based on stories for typically and atypically developing adolescents (Komeda et al., 2016), in which the protagonist’s characteristics and behaviors, as well as outcomes, were manipulated. There have been numerous studies examining the influence of aging on situation model construction (Johnson-Laird, 1983; van Dijk and Kintsch, 1983; Zwaan and Radvansky, 1998), which is a reader’s mental representation of a fictional story based on textual representations as well as previous knowledge or experience. These studies have suggested that older adults show a decline in certain levels of processing, such as surface form and text-based levels. However, situation model level processing is relatively well preserved (Radvansky, 1999; Radvansky et al., 2003; Stine-Morrow et al., 2004; Radvansky and Dijkstra, 2007). Therefore, we selected story materials to construct situation model in order to assess interpersonal decision-making processes in aging.

The aim of this study was to examine the interpersonal social decision-making information used by older adults when judging a story protagonist as good or bad. Social decision making is defined as decision making about social interactions in complex situations (Rilling and Sanfey, 2011). In Experiment 1, we assessed participants’ rapid decision-making processes when making good-bad judgments after reading consecutive sentences without reviewing previously read sentences. In Experiment 2, two protagonists engaging in a deliberate decision-making process were visually presented and participants were asked to judge the better and the worse protagonist. We predicted that older adults would judge protagonists using behavioral information during the social decision-making processes because they would be more likely than younger adults to make appropriate inferences about the behavior of others (Happé et al., 1998). More specifically, older adults were expected to make stereotypical decisions during rapid decision making (Radvansky et al., 2009, 2010) Therefore, we predicted that older adults would make appropriate decisions in the deliberate decision processes.

It is difficult to collect a large sample of older adults comprising several age ranges from a single community. Therefore, we used Cross Marketing, an online survey company. Participants registered with this company respond to research surveys for compensation. We recruited 100 older adults (50 women and 50 men, mean age = 63.6 years, range: 60–69 years old) and 100 younger adults (50 women and 50 men, mean age = 25.7 years, range: 22–29 years of age). All 200 participants were selected to have exactly 16 years of education leading to a university degree to ensure no differences in years of schooling between older and younger groups. Therefore, the differences between younger and older adults in the current study could not be explained by the years of schooling.

As shown in Table 1, a story consisted of three sentences (first sentence: characteristics; second sentence: behavior; and third sentence: outcomes). The number of letters in the third sentences was identical across all stories. The stories were presented on a screen, one sentence at a time. Each sentence remained on the screen until the participant pressed a key, when the next sentence appeared. Participants could not refer back to previous sentences but could read each presented sentence at their own pace. They completed the survey at home or in a quiet place through the internet. 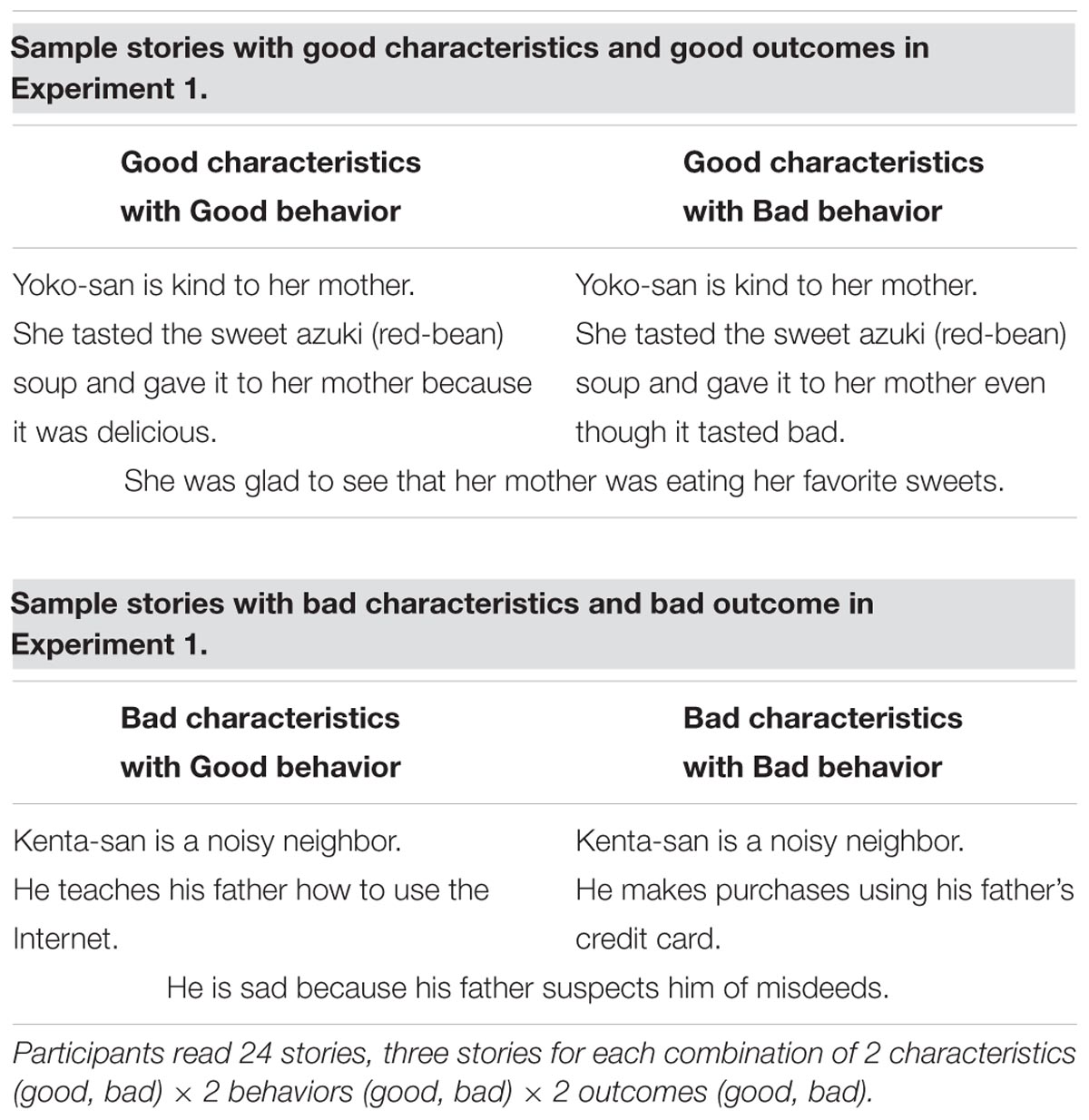 After reading each story, participants judged its protagonists as either good or bad. They read 24 stories, three stories for each combination of two characteristics (good, bad) × 2 behaviors (good, bad) × 2 outcomes (good, bad). The participants responded to two practice trials before the experimental trials to familiarize themselves with the reading procedure that was based on our previous study (Komeda et al., 2016). 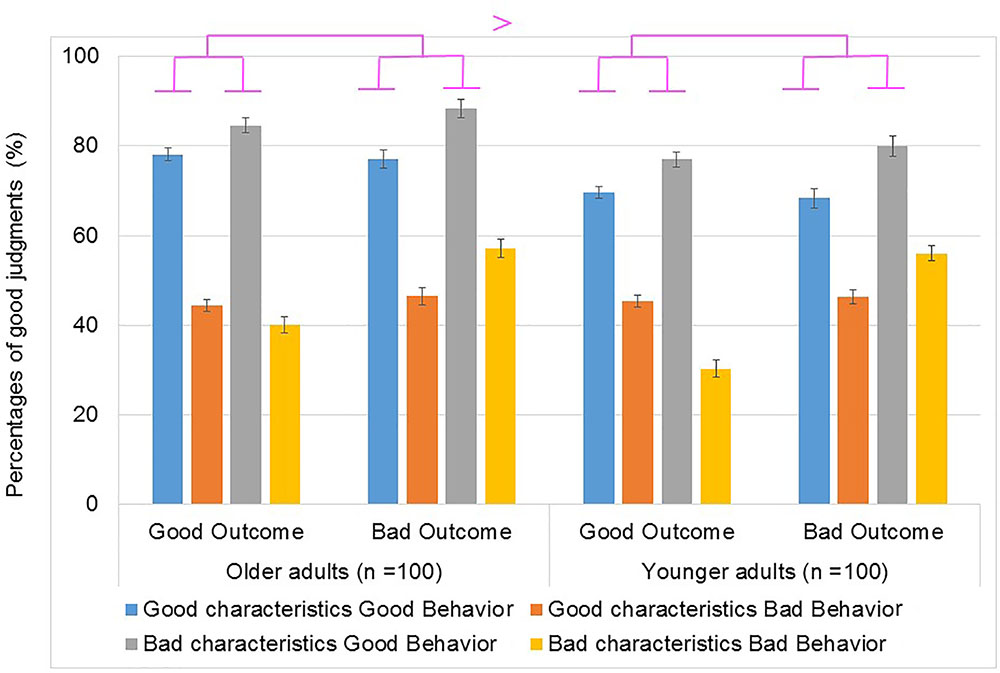 In Experiment 1, we assessed participants’ rapid decision-making processes when making good–bad judgments after reading consecutive sentences without reviewing previously read sentences. This paradigm was useful for investigating the processes of integration when making ongoing judgments. However, the accessibility to previous information was not controlled in Experiment 1: the second sentence describing behavioral information was closer to the outcome than the first sentence describing characteristics of the protagonists (Komeda et al., 2016). Additionally, this paradigm may have disadvantaged the older group, because they were required to remember three sentences when making their judgments.

In Experiment 2, all the sentences (in the two stories) were presented simultaneously to control for the accessibility of information. This enabled participants to compare different types of stories when both characteristics and behaviors of a protagonist were simultaneously available. As a result, we could identify the information that participants used for decision-making.

After completing the comparison task (Figures 2A,B), all the participants completed the Trust Scale (Yamagishi and Yamagishi, 1994): This is a 5-point scale designed to assesses general trust (6 items, Range = 5–30, high score means high trust) and caution (7 items, Range = 7–35, high score means high cautious). In this scale, items of general trust are statements concerning honesty and trustworthiness of people in general, such as “Most people are basically honest,” “Most people are basically good and kind,” “Most people will respond in kind when they are trusted by others.” On the other hand, items on caution are statements that point out risks in social life and advise caution in dealing with others, such as “One can avoid falling into trouble by assuming that all people have a vicious streak,” “There are many hypocrites in this society,” “No matter what they say, most people inwardly dislike putting themselves out to help others” (Yamagishi and Yamagishi, 1994). 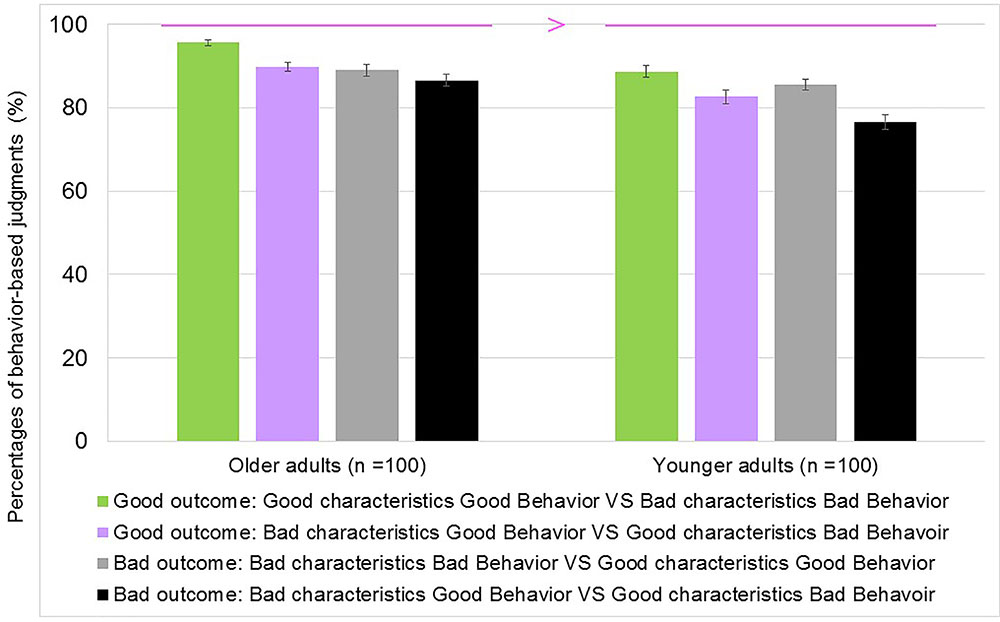 Analyses of Behavioral-Based Judgments in the Comparison Task

TABLE 2. Correlations and means (SD) of variables in Experiment 2.

TABLE 3. Standardized regression coefficients (beta weights) and R2 from the regression analyses based on behavior-based judgments in Experiment 2.

Results of Experiment 2 indicated that older people made behavior-based judgments more than younger people. Behavioral information is more explicit and observable than information on the characteristics of a protagonist (Komeda et al., 2016). We predicted that older adults would judge the protagonists based on behavioral information, which was supported by the results of the deliberate decision processes examined in Experiment 2.

Furthermore, people with more general trust engaged more in making behavior-based judgments, whereas people with more caution engaged less in making such judgments. It is known that general trust is a solution to the problems caused by social uncertainty (Rotter, 1980; Yamagishi and Yamagishi, 1994) and reduce complexity in the environment (Luhmann, 1979, 1988). Thus, people who have a high degree of “general trust” might focus on observable human behavior using a simple perspective rather than focus on changeable characteristics of the situation. On the other hand, the caution scale assesses the extent to which people feel that caution is required for dealing with others. Therefore, people with a high “caution” score might focus on changeable characteristics in more complex situations than merely focusing on observable behaviors.

These results suggest that when rapidly processing information during the social decision making, older adults display biases in deciding that a person is good. These results are consistent with other findings indicating that the age related positivity effect is the result of a top-down motivational shift, promoting emotionally gratifying experiences (Reed and Carstensen, 2012; Neta and Tong, 2016). Additionally, older adults might have judged people based on behavioral information by using a more deliberate decision-making process. Older adults tend to make stereotypical decisions in situations when sufficient time for careful consideration is unavailable (Radvansky et al., 2009, 2010). However, when sufficient time is available for deliberate decision-making, older adults do take behavioral information into account, rather than merely taking information about the protagonist based on stereotypes (von Hippel et al., 2000).

This study has the following limitations requiring careful interpretation of the results. Firstly, these experiments were conducted using a web-based sample to facilitate collecting data from a sufficient number of older participants. However, experimental research on reading and response times when performing cognitive tasks is necessary. Secondly, no cognitive tasks were examined for assessing the brain function of older people (which is a point that is also related the web-based survey). It is suggested that cognitive assessments should be considered essential in future studies investigating the relationship between the social decision making and aging. Thirdly, stories we created were culture-dependent. It might be difficult for people in other cultures to understand these stories as good or bad. It is suggested that culturally independent material need to be developed to demonstrate the generality of the findings of this study.

The present study focused on the social decision-making processes to clarify why older adults are more likely to become fraud victims. At least, in Japanese society, older people could become victims of fraud even if they do not have dementia (Watanabe et al., 2014). This could be explained by the significant differences in social decision-making between older and younger adults suggested by this study: older people judged others to be good more than younger people, and older people relied on behavioral-based information rather than information on a person’s characteristics, which is surprising, given that both groups were matched for education (as the years of schooling).

In spite of these limitations, however, this is the first study to have investigated social decision making during narrative comprehension using a large sample of older and younger adults. These results are expected to help in the development of programs to prevent older people becoming fraud victims. We hope that our findings would help decrease fraud around the globe.

Electronic informed consent was obtained from all the participants. This study was approved by the Ethics Committees of the Kyoto Prefectural University of Medicine and Keio University School of Medicine. The study was conducted in accordance with the declaration of Helsinki.

This research was funded, in part, by Grant-in-Aid for Scientific Research from the Japan Society for the Promotion of Science (15K13116, 16H01507, 16H02837, 18K03034) and partially supported by the Center of Innovation Program from Japan Science and Technology Agency, JST.

Copyright © 2018 Komeda, Eguchi, Kusumi, Kato, Narumoto and Mimura. This is an open-access article distributed under the terms of the Creative Commons Attribution License (CC BY). The use, distribution or reproduction in other forums is permitted, provided the original author(s) and the copyright owner(s) are credited and that the original publication in this journal is cited, in accordance with accepted academic practice. No use, distribution or reproduction is permitted which does not comply with these terms.