Evidence That the Hormonal Contraceptive Pill Is Associated With Cosmetic Habits

The hormonal contraceptive pill is used by approximately 100 million women worldwide (Christin-Maitre, 2013). Its main function is to change the hormonal state of the menstrual cycle in order to mimic, and thus prevent, pregnancy (Alvergne and Lummaa, 2010). While the majority of women take the contraceptive pill to prevent pregnancy, approximately 14% of women use it for other reasons, such as for lessening menstrual pain and migraines (Cooper and Adigun, 2017).

Thirty six women (M age = 19.58 years, SD = 2.14) completed the study. The participants were recruited at the University of Grenoble using advertisements and obtained financial compensation to participate in the study. The research was performed in accordance with the Declaration of Helsinki: it was conducted with the understanding and the written consent of each participant (who were instructed that their photographs would be taken) and was approved by local ethics boards (CNRS and the University of Grenoble). 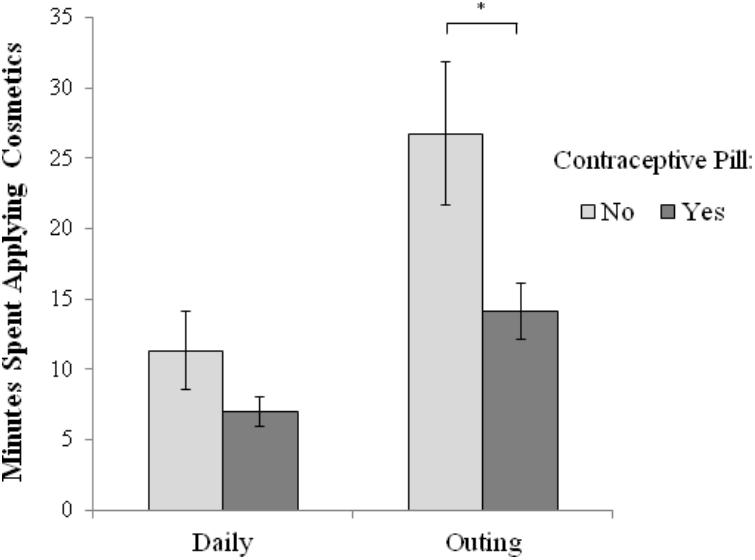 FIGURE 1. In minutes, reported amount of time spent applying daily cosmetics in the morning and reported amount of time spent making up for an outing, for both naturally cycling women (i.e., those not using the contraceptive pill) and women using the hormonal contraceptive pill. The asterisk indicates a significant difference (∗p < 0.05). Error bars indicate the standard error of the mean.

One hundred and forty three Gettysburg College students participated in Study 2 (M age = 18.53 years, SD = 0.87, 56 male, 87 female) as part of a course requirement. Ethical approval was received from the Gettysburg College Institutional Review Board. Participants were instructed that they would be viewing and rating face images on a computer. Participants were asked to rate each face on the question: “How much makeup does this face have?,” where 1 = Very little makeup and 7 = A lot of makeup. The faces presented were those of the women from Study 1. To examine the association between pill use and perceived amount of cosmetics, we performed a linear mixed model.

This is consistent with previous research suggesting that naturally cycling women are found more attractive than women using the hormonal contraceptive pill (Miller et al., 2007). Our study, however, proposes that part of such difference in attractiveness may be due to cosmetics. In other words, naturally cycling women may, in part, be found more attractive than women using the contraceptive pill because they wear more cosmetics, which greatly increases attractiveness (Graham and Jouhar, 1981; Batres et al., 2018). For instance, Miller et al.’s (2007) study found that naturally cycling lap dancers had higher tip earnings than those using the contraceptive pill, but part of that difference may be explained by a change in the amount of cosmetics worn by the dancers. Indeed, research has observed that waitresses receive higher tips when they are wearing cosmetics compared to when they are not (Jacob et al., 2009). This suggests it is likely that different makeup use explains part of the differences in attractiveness found between naturally cycling women and women using hormonal contraception.

Our results may also point to a larger issue: that the contraceptive pill may be associated with behavioral changes that affect women’s grooming practices more generally, of which cosmetics is just one part. In other words, the contraceptive pill may suppress how women adorn themselves, otherwise referred to as the extended phenotype (Etcoff et al., 2011). Some studies have examined how the extended phenotype changes throughout the menstrual cycle. For instance, one study found that self-grooming and ornamentation through attractive choice of dress increased during high fertility periods (Haselton et al., 2007). However, a recent longitudinal study did not find evidence for fertility-linked changes in women’s clothing choices (Arslan et al., 2017). Similar studies are needed to compare the extended phenotype of women who are using the contraceptive pill and those that are not. Such research would shed light on whether cosmetic habits are the only form of ornamentation influenced by the contraceptive pill or whether it is just one facet of a greater behavioral shift in how women present themselves (e.g., grooming, jewelry, clothing).

Our study did not control the phase of the menstrual cycle in which women were photographed nor asked how long the women had been using or not using the contraceptive pill and therefore future research should control for this. We also did not define what was meant by an outing and the interpretation of this could have had some impact on self-reported time spent applying cosmetics. For example, women may have reported less time if an outing was interpreted as going out for dinner versus if it was interpreted as going out to a club. Future studies would therefore benefit from being more specific when asking about time spent applying cosmetics for an outing. Similarly, while we asked the women how much time they spend on their daily makeup in the morning, it would have been helpful to ask how much time they spent making up that exact morning in order to better link cosmetics application time with perceptual differences. Moreover, adding other measures of cosmetics use would also be beneficial in future studies (e.g., “How natural does the makeup on this face look?”). Women who are skilled at perfecting the “natural” look are likely to spend more time applying cosmetics but may appear to be wearing less makeup.

In conclusion, we found that, compared to women using the contraceptive pill, naturally cycling women self-reported spending more time applying cosmetics for an outing, and their faces were rated as having higher levels of cosmetics. These results provide initial evidence that the contraceptive pill is associated with cosmetic habits. Moreover, this association may be part of a broader relationship between contraceptive pill use and other grooming behaviors, stemming from hormone-mediated changes in motivations.

The experiments were undertaken with the understanding and written consent of each subject, with the approval of the appropriate local ethics committees, and in compliance with national legislation and the Code of Ethical Principles for Medical Research Involving Human Subjects of the World Medical Association (Declaration of Helsinki).

The research was funded in part by CHANEL Fragrance & Beauty Research & Innovation.

We thank Lucille Brunero for help with collecting data for this manuscript.

Copyright © 2018 Batres, Porcheron, Kaminski, Courrèges, Morizot and Russell. This is an open-access article distributed under the terms of the Creative Commons Attribution License (CC BY). The use, distribution or reproduction in other forums is permitted, provided the original author(s) and the copyright owner(s) are credited and that the original publication in this journal is cited, in accordance with accepted academic practice. No use, distribution or reproduction is permitted which does not comply with these terms.

Perceptions of People: Cues to underlying Physiology and Psychology