5-MeO-DMT is a psychoactive substance found in high concentrations in the bufotoxin of the Colorado River Toad (Bufo alvarius). Emerging evidence suggests that vaporized 5-MeO-DMT may occasion mystical experiences of comparable intensity to those occasioned by more widely studied psychedelics such as psilocybin, but no empirical study has tested this hypothesis. Data was obtained from 20 individuals (Mage = 38.9, ± 10.7; male = 55%, Caucasian = 85%) who were administered 5-MeO-DMT as part of a psychospiritual retreat program in Mexico. All participants received 50 mg of inhaled vaporized toad bufotoxin which contains 5-MeO-DMT and completed the Mystical Experience Questionnaire (MEQ30) approximately 4–6 h after their session. Administration of 5-MeO-DMT occasioned strong mystical experiences (MEQ30 Overall Mintensity = 4.17, ± 0.64, range 0–5) and the majority (n = 15, 75%) had “a complete mystical experience” (≥60% on all MEQ30 subscales). Compared to a prior laboratory-based psilocybin study, there were no differences in the intensity of mystical effects between 5-MeO-DMT and a high dose (30 mg/70 kg) of psilocybin, but the intensity of mystical effects was significantly higher in the 5-MeO-DMT sample compared to moderate/high dose (20 mg/70 kg) of psilocybin (MEQ30 Total Score: p = 0.02, d = 0.81). Administration of vaporized 5-MeO-DMT reliably occasioned complete mystical experiences in 75% of individuals and was similar in intensity to high dose psilocybin administered in a laboratory setting. The short duration of action may be advantageous for clinical interventions and for studying mystical-type experiences.

5-Methoxy-N,N-dimethyltryptamine (5-MeO-DMT) is a psychoactive indolealkylamine (Yu, 2008; Szabo et al., 2014) that is present in the bufotoxin of the Colorado River toad (Bufo alvarius) (Weil and Davis, 1994; Lyttle et al., 1996), numerous plant species (Smith, 1977; Ott, 2001; Shulgin and Shulgin, 2002), and can be synthetically produced (Hoshino and Shimodaira, 1936). Preliminary evidence shows that 5-MeO-DMT occasions mystical experiences (Davis et al., in press) similar in intensity to those occasioned by psilocybin (Griffiths et al., 2011), with a much shorter duration of action (half-life 12–19 min; Shen et al., 2010). Mystical experiences occasioned by psilocybin are a primary predictor of therapeutic outcomes in patients with substance use disorders (Garcia-Romeu et al., 2014; Bogenschutz et al., 2015) and depression/anxiety (Cowen, 2016; Griffiths et al., 2016). Such experiences are reported as profoundly meaningful, spiritual and transformative peak life events, and are associated with adaptive outcomes across a range of psychological domains (Griffiths et al., 2018; Roseman et al., 2018). However, the lack of laboratory-based studies examining the dose-related effects of 5-MeO-DMT in humans limits our understanding of this substance. Furthermore, no published studies have directly compared the intensity of mystical experiences occasioned by 5-MeO-DMT to psilocybin administered in the laboratory.

All 20 participants (11 males) were residents of a psychospiritual retreat at a center in Baja California, Mexico, between August 2015 and May 2017. They were medically healthy as determined by medical examination and history, electrocardiography, and urine drug testing. Participants had an average age of 38 years (range, 21–57 years). Eight participants (40% of the sample) had a college degree, five (25%) had a graduate degree, and three (15%) had a high school diploma. Seventeen participants (85%) reported their ethnicity as White/Caucasian; one (5%) Asian; one (5%) Latino or Hispanic; and one (5%) other. Sixteen of the participants (80%) were from the United States; two (10%) from Canada; and two (10%) from Australia and New Zealand. Nine participants (45%) reported having a religious affiliation that included three (15%) affiliated with Christianity, two (10%) with inter/non-denominational faith, two (10%) with Hinduism, one (5%) with Judaism, and one (5%) with Buddhism.

At the center, all residents were accepted into the four-day retreat program on a fee-for-service basis that included administration of vaporized 5-MeO-DMT and therapeutic preparation, education, and integration. Each resident received 50 mg of vaporized bufotoxin, estimated to contain 5–7 mg of 5-MeO-DMT (5-MeO-DMT content of 10–15%, considered a “light” to “common” dose) (Weil and Davis, 1994; Metzner, 2013; Erowid, 2017). The bufotoxin was obtained from wild toads in the Sonoran Desert, Mexico. The bufotoxin was kept in a glass vial attachment of an Eclipse (Herbal, 2016) handheld vaporizer and heated with a torch lighter to the point of vaporization of all contents. As soon as vapors began to be emitted, residents were instructed to fully exhale and then slowly fill their lungs to capacity and hold the full inhalation for a minimum of 10s. At the end of 10s, the facilitator guided residents to exhale and lay down. A medical doctor and facilitator/guide were present during the session. Within 4–6 h following their experience, residents were given the option to complete the Mystical Experience Questionnaire (described below) as part of a brief anonymous exit program evaluation and satisfaction survey on an online survey platform1. Of the 76 residents who completed the exit survey, 20 opted to complete the questionnaire (26.3% completion rate). No identifiable data was collected and the survey was stored in a secured database separate from clinic records.

The manuscript is based on a secondary analysis of previously collected data and the authors were only given access to anonymous and de-identified data. This retrospective analysis of archival data was determined exempt from review (IntegReview IRB, Austin TX) and informed consent was not required. The source of the original data was anonymous survey responses and was provided by Crossroads Treatment Center for analysis.

We used the 30 items of the Mystical Experience Questionnaire (MEQ30; Barrett et al., 2015) to measure acute mystical effects of 5-MeO-DMT. The MEQ30 was rescored from the 100-item States of Consciousness Questionnaire (SOCQ) (Griffiths et al., 2006). Participants rated the intensity with which they experienced each item on a 6-point scale [from “0 = none; not at all” to “5 = extreme (more than ever before in my life and stronger than 4)”] (Griffiths et al., 2006). MEQ30 total scores range from 0 to 150. The MEQ30 has four factors (mystical [which includes unitive experiences, noetic quality, and sacredness], positive mood, transcendence of time/space, and ineffability) described in Barrett et al. (2015). A participant was scored as having had a “complete mystical experience” when ≥60% of the maximum possible score was endorsed on all four MEQ subscales. The MEQ30 has demonstrated sensitivity in assessing the effects of a range of psychedelic compounds, including LSD (Schmid and Liechti, 2017), MDMA (Lyvers and Meester, 2012), psilocybin (Barrett et al., 2015), ayahuasca (Schenberg et al., 2017), and 5-MeO-DMT (Davis et al., 2018).

Demographic data were analyzed using frequency counts. Correlational analyses were used to determine significant associations between demographic values and MEQ30 scores. Independent sample t-tests were performed to compare the MEQ30 ratings for the current sample with those from a laboratory psilocybin study (Griffiths et al., 2011; Barrett et al., 2015; Appendix 3). Because of the limitations associated with using significance tests as a primary statistical procedure and the limitations of using a corrected alpha in exploratory studies, a standard alpha of 0.05 was used to determine the significance of statistical tests and effect sizes (Cohen’s d) were calculated for each test to assist with interpretation of meaningful effects.

There were no significant correlations between MEQ30 scores and any demographic variables (data not presented but available upon request). Overall, 75% of the participants met the criteria for “a complete mystical experience” (scoring ≥60% of the maximum possible scores on all four MEQ subscales). Mean scores across the MEQ30 subscales ranged from 79% to 89% of the maximum possible score (See Table 1). Item means for each subscale were consistent with the rating of a “strong” mystical experience: mystical, 3.96 ± 0.92; positive mood, 4.43 ± 0.58; transcendence of time and space, 4.28 ± 0.69; ineffability, 4.43 ± 0.63; and the MEQ30 total score, 4.17 ± 0.64.

Table 1. MEQ30 data after 5-MeO-DMT administration in a psychospiritual sample compared to the findings obtained with moderate and high doses of psilocybin in a previously published study by Griffiths et al. (2011) (scores from Barrett et al., 2015).

Comparison of MEQ30 Scores With Ratings From a Prior Psilocybin Study 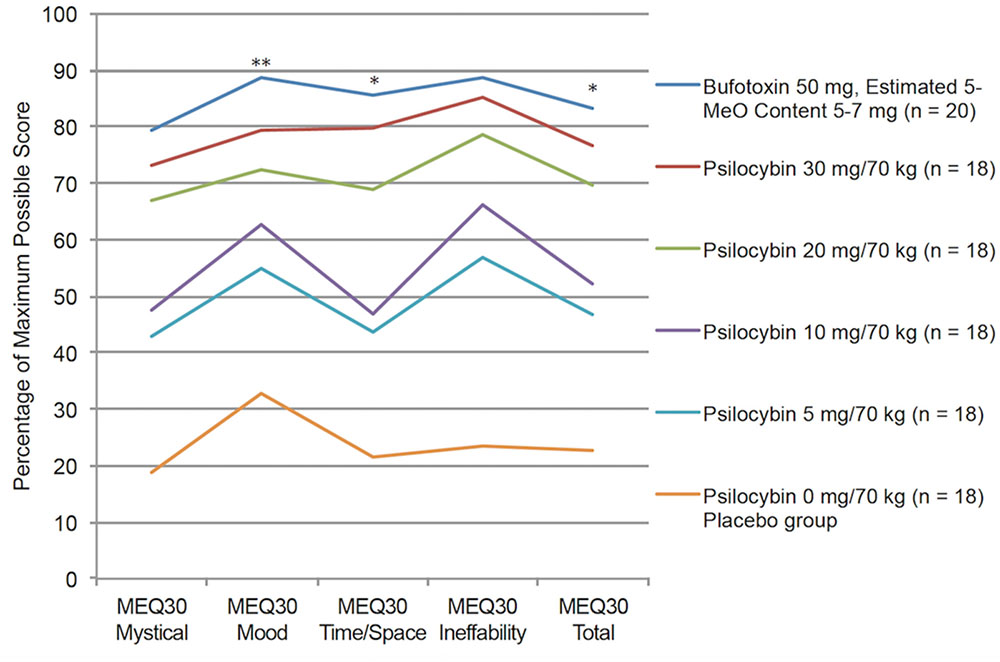 Nevertheless, the current study had several limitations. First, this study was neither prospective nor placebo-controlled. Additionally, each dose of bufotoxin likely had slightly varying potencies across participants because 5-MeO-DMT concentrations vary across toad samples, and because bufotoxin contains relatively smaller concentrations of other tryptamines (Erspamer et al., 1967; Weil and Davis, 1994; Qi et al., 2018), which may alter the subjective experience in comparison to synthetically produced 5-MeO-DMT. Furthermore, participants received 5-MeO-DMT in a four-day program that included ibogaine administration 48 h before 5-MeO-DMT. The active metabolite of ibogaine, noribogaine, has a half-life of 28–49 h (Glue et al., 2015), and may potentiate 5-MeO-DMT experiences. The study is also limited by a lack of diverse representation, most of the samples were educated Caucasian individuals from the United States, limiting the generalizability of the findings. Moreover, extensive psychiatric history of the residents was not obtained; thus, we cannot rule out the possibility that some participants may not have been “healthy volunteers,” unlike the individuals in the psilocybin study.

5-MeO-DMT appears to have a relatively safe profile for use in naturalistic settings (Davis et al., in press) and in the general population (Davis et al., 2018) as evidenced by reports of low addiction liability (i.e., craving, legal, medical, psychiatric problems associated with consumption), which requires further investigation in a phase 1 trial. Initial evidence suggests 5-MeO-DMT shows possible psychotherapeutic effects, as individuals from a survey study (Davis et al., 2018; Davis et al., in press) who reported being diagnosed with depression, anxiety, post-traumatic stress disorder, and substance addictions reported improvement in their symptoms following 5-MeO-DMT use. The results of the present study extend the previous findings by demonstrating that the subjective mystical effects of 5-MeO-DMT administered in a retreat setting are similar to those reported in prior 5-MeO-DMT studies, and that the intensity of these effects is statistically equivalent to that of high-dose psilocybin administered in a laboratory setting. Since a light to common dose of 5-MeO-DMT appears to occasion mystical experiences of a comparatively similar intensity to high-dose psilocybin but with a much shorter duration of action, 5-MeO-DMT may have psychotherapeutic applications and could be relatively easier to use in mental health treatment systems. It is also a compound of interest for characterizing mystical-type experiences and their consequences. Since the intensity of mystical experiences occasioned by psychedelics may predict their therapeutic efficacy (Roseman et al., 2018), further research is warranted on the use of 5-MeO-DMT as a potential therapeutic agent in the treatment of multiple mental health issues.

JB was employed by Crossroads Treatment Center (Crossroads) as a Director of Assessment and Research at the time of data collection. JB received grant funding from The Mission Within through a private donation by David Seligman and Lisa Fulton Burke. AD was supported by a National Institute on Drug Abuse T32 institutional postdoctoral training grant (#DA007209). Crossroads provided $660 for IRB application. RL was supported by Source Research Foundation for administrative work during this study. MP was the owner of Crossroads during this study, although he authorized financial resources for conducting this study, he had no involvement with data analyses or interpretation of results.

RRG is a member of the Board of Directors of the Heffter Research Institute.

We would like to thank the participants and staff at Crossroads Treatment Center for sharing their time, experience, and insights. We also thank the Bufo Alvarius toads for providing the venom that was given to participants in this study. We encourage anyone who reads this article to be thoughtful about the ecological stability of this species and to consider other sources of 5-MeO-DMT.

Metzner, R. (2013). The Toad and the Jaguar: a Field Report of Underground Research on a Visionary Medicine: Bufo alvarius and 5-Methoxy-dimethyltryptamine. Berkeley, CA: Regent Press.

Copyright © 2018 Barsuglia, Davis, Palmer, Lancelotta, Windham-Herman, Peterson, Polanco, Grant and Griffiths. This is an open-access article distributed under the terms of the Creative Commons Attribution License (CC BY). The use, distribution or reproduction in other forums is permitted, provided the original author(s) and the copyright owner(s) are credited and that the original publication in this journal is cited, in accordance with accepted academic practice. No use, distribution or reproduction is permitted which does not comply with these terms.