Peterson and Seligman (2004) define courage as a character strength that promotes the exercise of will to achieve goals, even when faced with opposition. A courageous decision contains an element of risk, the freedom to act, and a purposeful outcome (Shelp, 1984; Woodard, 2004; Rate, 2007; Rate et al., 2007).

Entrepreneurs often deal with plenty of risks and uncertainties. Courage can be a critical psychological resource for entrepreneurs. Naughton and Cornwall (2006) consider courage to be the most important quality for successful entrepreneurs. Without courage, an individual may never follow through with an entrepreneurial idea or leave the perks and certainties of typical employment to pursue entrepreneurship.

PsyCap is a higher-order construct defined as “an individual’s positive psychological state of development and is characterized by: (1) having confidence (self-efficacy) to take on and put in the necessary effort to succeed at challenging tasks; (2) making a positive attribution (optimism) about succeeding now and in the future; (3) persevering toward goals and, when necessary, redirecting paths to goals (hope) in order to succeed; and (4) when beset by problems and adversity, sustaining and bouncing back and even beyond (resiliency) to attain success” (Luthans et al., 2015, p. 2). Hope, efficacy, resilience, and optimism work together to produce results greater than each of the individual resources. The underlying mechanism or common thread linking PsyCap’s resources is that they all share a “positive appraisal of circumstances and probability for success based on motivated effort and perseverance” (Luthans et al., 2007, p. 550).

Entrepreneurs’ PsyCap is positively related to venture performance (Hmieleski and Carr, 2008), authentic leadership (Jensen and Luthans, 2006) and wellbeing (Hmieleski and Carr, 2007; Roche et al., 2014). Interestingly, entrepreneurs with higher PsyCap have been found to experience lower, rather than higher levels of stress and anxiety than the average population. This highlights the importance of PsyCap in attracting and sustaining entrepreneurship efforts (Baron et al., 2016).

Life satisfaction is defined as “a global assessment of a person’s quality of life according to his chosen criteria” (Shin and Johnson, 1978, p. 478). Life satisfaction occurs when an individual cognitively assesses his or her current life against a preconceived subjective standard and believes to have met or exceeded that standard (Pavot and Diener, 1993). An individual may choose money, prestige, family, or work, as important life domains for determining life satisfaction (Diener et al., 1985). Kim-Prieto et al. (2005) posit that subjective wellbeing is determined by positive appraisals and memories. Since venture success is subjective to each entrepreneur (Naughton and Cornwall, 2006), life satisfaction is an important and meaningful entrepreneurship outcome.

Courage can enhance entrepreneurs’ PsyCap in several ways. One of the most effective ways to build PsyCap efficacy is through mastery experiences (Bandura, 1997). Courageous entrepreneurs are likely to be more confident than their less courageous counterparts who never dare to try, take risks, and embrace uncertainty to build those valuable experiences. Courage can also promote PsyCap hope and optimism. A courageous entrepreneur may perceive a risky but feasible path around a setback as a possibility with a “can do” and “will do” attitude. Finally, entrepreneurs will most likely face adversities and setbacks. Resilient individuals function well under environmental stress and uncertainty (Rutter, 1987; Klohnen, 1996). Thus, courage can promote the PsyCap resources of hope, efficacy, resilience, and optimism, and the following is hypothesized.

Hypothesis 1: Entrepreneurs’ Courage Is Positively Related to Their PsyCap

Hypothesis 2: Entrepreneurs’ PsyCap Is Positively Related to Their Life Satisfaction

Hypothesis 3: Entrepreneurs’ Courage Is Positively Related to Their Life Satisfaction

Courage can help an individual face the risk and take the leap to make the dream a reality. A courageous entrepreneur will determine the level of risk associated with the goals for the business and possible outcomes. In turn, this courage to start and pursue an entrepreneurial venture can help the entrepreneur build confidence, find a different path if the initial one is no longer viable (hope), persevere and bounce back from setbacks (resilience), and maintain a positive outlook (optimism). In turn, PsyCap’s positive appraisals and agentic, intentional approach can promote satisfaction with the entrepreneurial experience and lifestyle in general. In contrast, without PsyCap, the entrepreneur may just give up and attribute failure to individual shortcomings, which can lead to dissatisfaction. Thus courage can contribute to entrepreneurs’ life satisfaction, both directly and indirectly through leveraging PsyCap, and the following is hypothesized.

Hypothesis 4: Entrepreneurs’ PsyCap Mediates the Relationship Between Their Courage and Life Satisfaction

A survey was sent to all entrepreneurs who filed a new registration with the Secretary of State in a Midwestern state 2 years prior to the study (N = 3540). Carland et al. (1984) defined a successful entrepreneurial venture as one that has survived for 2 years. Thus, the 2-year mark was used as an indicator of venture survival. 152 entrepreneurs completed the survey.

Descriptive statistics, correlations, and Cronbach’s alphas are represented in Table 1. Correlations between courage, PsyCap, and life satisfaction were all significant, supporting hypotheses 1–3. 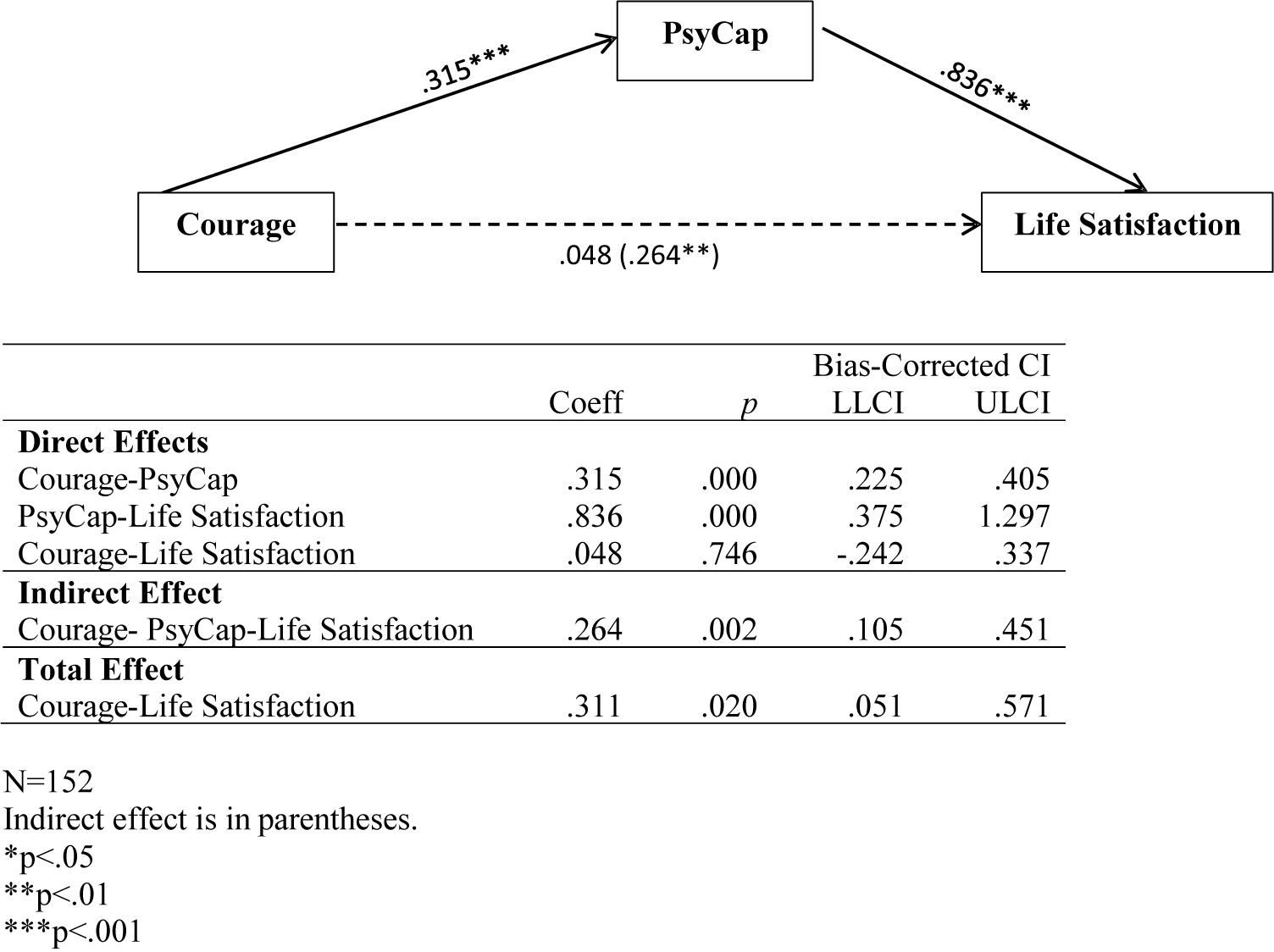 Cross-sectional studies also run the risk of reverse causality. Thus, we ran five additional models (all the possible causal sequences among the three study variables) using both AMOS and PROCESS. With the exception of the hypothesized model and one alternative model (life satisfaction-PsyCap-courage), all of the other models showed poor fit. These two models also had the lowest AIC values (which can be used to compare non-nested models), representing the best fit (detailed results of these analyses are available from the authors).

This is the first study to explore courage in the context of entrepreneurship, and one of a few studies that examine entrepreneurs’ PsyCap. Entrepreneurs face extraordinary risks, challenges, and uncertainties. Positive psychological resources such as courage and PsyCap are necessary to start and sustain an entrepreneurial venture while maintaining life satisfaction and wellbeing.

A key finding is that PsyCap fully mediates the relationship between courage and life satisfaction in entrepreneurs. Thus, PsyCap may be an explanatory mechanism of this relationship. Contrary to anecdotes of fearless entrepreneurs who pursue entrepreneurship for the “thrill” or “rush” of taking extreme risks, courage seems to promote a more calculated approach to entrepreneurship. Specifically, Courage promotes hope, efficacy, resilience, and optimism, which share positive cognitive appraisals of success prospects based on motivation, effort, and perseverance (Luthans et al., 2007). Thus, courage does not promote reckless risk taking, or lead to unjustified satisfaction with an entrepreneurial lifestyle regardless of outcomes. Rather, courage promotes a positive and thoughtful approach to entrepreneurship that leads to life satisfaction based on intentional goal pursuit and achievement, effective deployment of effort and resources, and motivated persistence through obstacles and setbacks.

Limitations of this study include the small and homogenous sample, which limits external validity. Self-selection bias was also a concern, especially since most venture were still operating. However, venture survival was included as a control variable and was not significant. Common-method and single-source biases, as well as reverse-causality, are also potential validity threats as discussed earlier.

This study has several implications. Courage and PsyCap are malleable psychological resources that can be developed (Luthans et al., 2015; also see Youssef-Morgan and Petersen, 2019, for a comprehensive review of PsyCap development interventions). Furthermore, researchers, entrepreneurs and policymakers should adopt a more global perspective on entrepreneurial success. Financial measures are important, but they do not tell the full story. Many entrepreneurs are not “in it for the money,” but for a lifestyle of autonomy and intrinsic fulfillment. Societies that seek to promote entrepreneurship due to its economic benefits should not overlook its personal and subjective drivers and outcomes.

For future research, additional antecedents can be considered, including traits such as intelligence and personality, as well as more transient states such as moods and emotions. Contextual and environmental factors are also important and can represent boundary conditions in entrepreneurial contexts (Hmieleski and Baron, 2008, 2009; Hmieleski et al., 2013, 2015). Importantly, longitudinal and experimental research is necessary to further examine the causal relationships among the study variables. This study could also be replicated in other countries to examine cross-cultural consistencies and boundary conditions.

The datasets for this study will not be made publicly available because this data set is the property of the authors.

KB was responsible for data collection. Both authors contributed equally to formulating the conceptual framework, analyzing the data, and writing the manuscript.

Copyright © 2019 Bockorny and Youssef-Morgan. This is an open-access article distributed under the terms of the Creative Commons Attribution License (CC BY). The use, distribution or reproduction in other forums is permitted, provided the original author(s) and the copyright owner(s) are credited and that the original publication in this journal is cited, in accordance with accepted academic practice. No use, distribution or reproduction is permitted which does not comply with these terms.

The Role of Psychological Capital in Entrepreneurial Contexts