This brief report examines the within–network construct validity of the UWES–9S in a convenience sample of 1502 Chilean students (52% were female) ranging between 18 and 25 years old. The results of confirmatory factor analysis supported a solution with three related factors that fit significantly better than a one-factor solution. The three subscales (i.e., vigor, dedication, and absorption) and the overall UWES–9S showed satisfactory internal consistency. The results of multiple–group confirmatory factor analysis supported gender invariance. Overall, the UWES–9S was found to be a reliable and valid scale to assess academic engagement in Chilean undergraduate university students.

The concept of work engagement –a positive, fulfilling, work related state of mind characterized by vigor, dedication, and absorption (Schaufeli et al., 2002b) – refers to the work activities employees perform. However, this construct has also been applied to the activities students perform, referred to as academic engagement (Schaufeli et al., 2002a). The reasoning is that, psychologically speaking, the activities students perform can also be considered as “work,” in the sense of goal–directed and structured activities, which are compulsory in nature. More specifically, vigor refers to high levels of energy and mental resilience while studying, the willingness to invest effort in studying, and persistence even when encountering difficulties; dedication refers to being strongly involved in one’s studies and experiencing a sense of significance, enthusiasm, inspiration, pride, and challenge; and absorption refers to being fully concentrated and happily engrossed in what one is studying, where time passes quickly and one finds it difficult to detaching him/herself from studying (Schaufeli, 2017).

The research on academic engagement carried out so far is at pre-professional levels (i.e., undergraduate university students) and uses the Utrecht Work Engagement Scale for students (UWES–S; Schaufeli et al., 2002a). The UWES–S is the student version of the most widely used instrument to assess work engagement, the Utrecht Work Engagement Scale (UWES; Schaufeli et al., 2002b). Originally, the UWES included 17 items and three dimensions (i.e., vigor, dedication, and absorption). Later, for pragmatic reasons, the UWES was reduced, resulting in a 9–item version (UWES–9) that showed adequate psychometric properties as well (Schaufeli et al., 2006).

The UWES–9S is also popular in Spanish–speaking South American countries, where no rigorous psychometric evaluation has been carried out so far. Thus, aim of the present brief report is to fill this gap by examining the factorial validity, reliability, and gender invariance of the UWES–9S in a sample of undergraduate Chilean university students. Providing empirical evidence about the UWES–9S makes it possible to examine the continuum from academic to working life, which has hardly been addressed (Upadyaya and Salmela–Aro, 2013).

Based on the arguments presented, we hypothesize the following: The UWES–9S will demonstrate acceptable psychometric properties in a Chilean sample of undergraduate university students.

The data were collected in the context of a research project about the role of students’ well–being in academic achievement. The project was approved by the research ethics committee of the host university. The participants voluntarily filled out an online questionnaire during their usual class schedule.

The UWES–9S (Schaufeli et al., 2006) is a nine–item self–report scale grouped into three subscales with three items each (see Table 1): vigor (VI), dedication (DE), and absorption (AB). All items are scored on a seven–point frequency rating scale ranging from 0 (never) to 6 (always). For the purposes of this study, the Spanish version of the UWES–9S1 was adapted slightly –following the guidelines of the International Test Commission for adapting tests across cultures (Muñiz et al., 2013)– in order to improve its comprehension by undergraduate Chilean students. Furthermore, before the data collection, the nine items were piloted in a small group of participants to verify their clarity (n = 10). None of the participants expressed problems with understanding the items or the answering format of the UWES–9S. 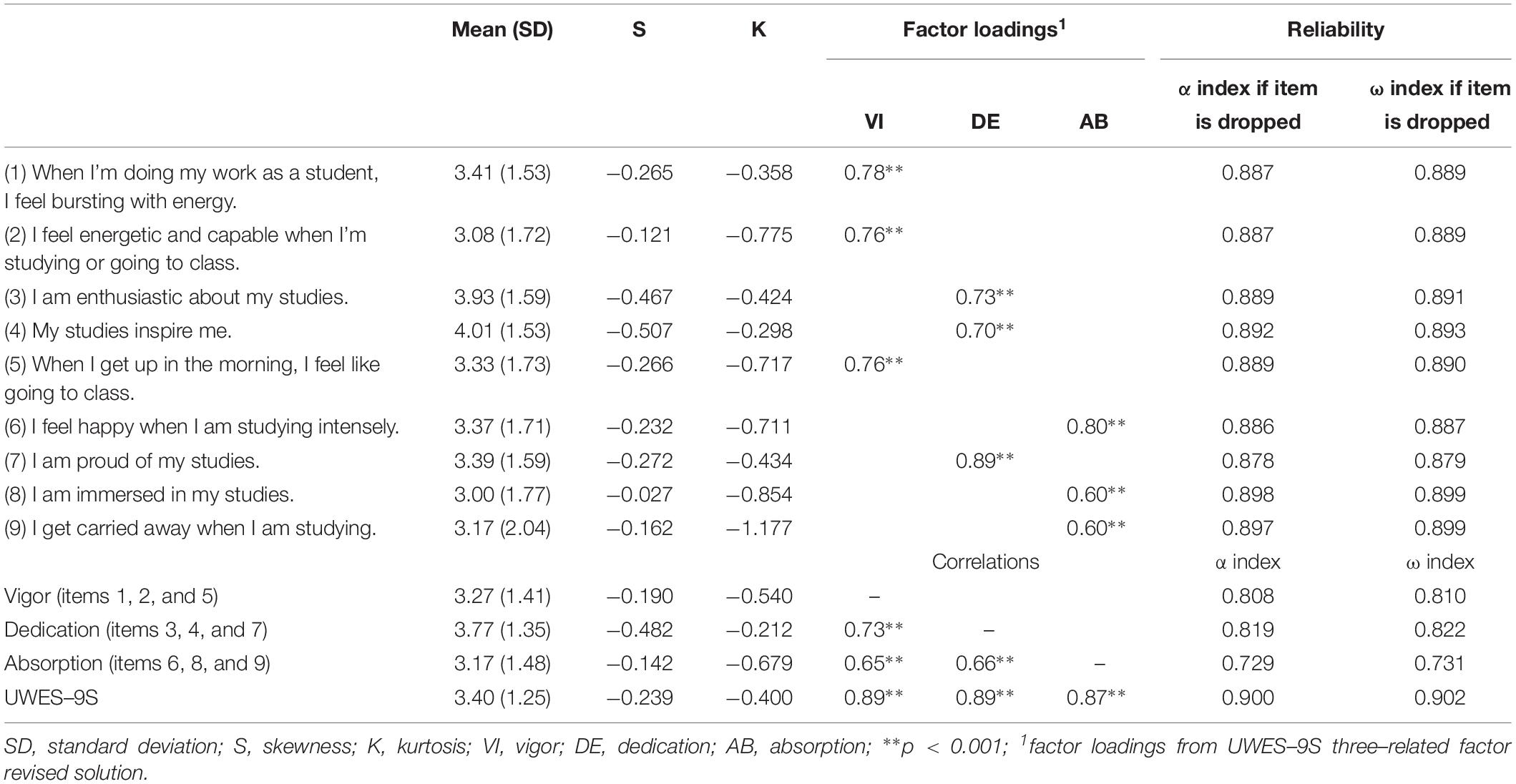 Table 1. Descriptive information of the UWES–9S and factor loadings resulting from CFA.

All analyses were conducted using SPSS AMOS 23.0 (IBM Corp, 2015) and JASP computer software (Jasp Team, 2018). First, we examined the descriptive statistic values, the internal consistency –using Cronbach’s alpha and McDonald’s omega indexes– and gender differences. To examine the factor structure, we performed confirmatory factor analysis (CFA) through the maximum likelihood estimation approach. To evaluate its goodness of fit, we computed the chi–square (χ2) and normed χ2, root–mean–squared error of approximation (RMSEA) with a confidence interval (90% CI), comparative fit index (CFI), and standardized root mean residual (SRMR). To help evaluate the cut–off and determine model fit, we followed the guidelines published by the European Journal of Psychological Assessment (Schweizer, 2010). To explore gender invariance –following Chen (2008)– we tested for configural (i.e., same structure across groups), metric (i.e., same factor loadings across groups), and scalar invariance (i.e., same intercepts across groups) through multiple–group CFA. To evaluate the magnitude of the change in the fit index, we followed the recommendations of Cheung and Rensvold (2002), who suggested that an absolute difference in CFI (i.e., ΔCFI) or SRMR (i.e., ΔSRMR) of less than 0.01 would indicate that the models are equivalent in terms of fit. In addition, although the chi–squared difference test may overstate non-substantive discrepancies –because it is sensitive to sample size– we also report this value.

Preliminary Analysis and Reliably of the Scores

Based on previous research on the validity of the UWES (e.g., Schaufeli et al., 2006, 2017), we tested two models: one that assumes that all the engagement items load in one single factor (M1), and one that proposes three related factors (M2). The results of the CFAs show that the data fit of both models to the data is good, except that the RMSEA value exceeds the criterion of 0.08 (see M1 and M2 in Table 2). To decide whether the model needed re–specification, we inspected the modification indexes, which indicated that allowing the errors for two items from the absorption subscale to correlate could increase the model fit (items 8 and 9, r = 0.30, p < 0.005). The two resulting models (see M3 and M4 in Table 2) fitted the data significantly better (see Table 2, M1–M3 for the one–factor solution and M2–M4 for the three–factor solution). In addition, the comparison of the re–specified models shows that the three–factor model (M4) fits significantly better than the re–specified model with one factor (M3). Hence, M4 was used as the baseline model in the multiple–group CFA.

Limited attention has been paid to examining the psychometric properties of the UWES–9S, particular in Spanish–speaking Latin American countries. Therefore, this brief report provides empirical evidence about the factor validity, reliability, and measurement invariance across male and female Chilean students.

Our results coincide with international research on the factor structure of the UWES–9 (Schaufeli et al., 2002a, b, 2006; Balducci et al., 2010; Sánchez–Cardona et al., 2016; Loscalzo and Giannini, 2018; Tayama et al., 2018). In other words, vigor, dedication, and absorption are satisfactorily explained by a solution with three related factors. In addition, reliability analysis –based on Cronbach’s alpha and McDonald’s omega indexes– of the subscales and the overall UWES–9S indicated high internal consistency. Gender invariance was also demonstrated, revealing its capacity to evaluate academic engagement in a similar way and with the same precision in male and female undergraduate university students. Together, these results lead us to conclude that the UWES–9S produces scores that could be of value, in terms of reliability and validity, in measuring academic engagement in Chilean undergraduate university students.

The main strength of the present study is the large sample used. However, there are also some limitations that should be mentioned. First, we used a convenience sample that does not represent all Chilean undergraduate university students adequately, or all academic fields. Thus, a more representative and diversified sample is needed to compare our results. Second, we only focused on a within–network validity approach. Hence, a nomological network approach is needed to explore significant relationships between the UWES–9S and other study–related variables, such as academic burnout, psychological capital, or academic performance, to test convergent and predictive validity. Third, modification indices have been used to allow two errors to correlate in order to improve the fit of the UWES–9S. This strategy is coherent with previous UWES research (e.g., Schaufeli, 2017; Loscalzo and Giannini, 2018), and it is justified by overlapping meaning or item content (MacCallum et al., 1992): “I am immersed in my studies” and “I get carried away when I am studying.”

In order to expand the future research on academic engagement, it would be interesting to examine the applicability of the UWES–9S at levels that have not yet been explored (e.g., class–level academic engagement). In addition, examining the predictive role of the UWES–9S –as an external report (e.g., peer rated by teachers and parents)– in students’ academic outcomes could be considered a fruitful future line of research. Finally, we want to mention two challenges that would help to increase the knowledge about the UWES in academic contexts. The first would be to examine the equivalence (i.e., measurement invariance) of the UWES–9S across countries, and the second to establish cut–off scores for high and low levels of academic engagement.

All authors contributed equally to the research design and wrote the manuscript.

Copyright © 2019 Carmona-Halty, Schaufeli and Salanova. This is an open-access article distributed under the terms of the Creative Commons Attribution License (CC BY). The use, distribution or reproduction in other forums is permitted, provided the original author(s) and the copyright owner(s) are credited and that the original publication in this journal is cited, in accordance with accepted academic practice. No use, distribution or reproduction is permitted which does not comply with these terms.