Internalized weight bias (IWB), the belief that negative stereotypes about weight apply to the self, is a significant concern in women, as it has been linked with a range of physical and psychological issues, including disordered eating (Durso et al., 2012, 2016). For example, IWB is associated with binge eating among treatment-seeking adults (Carels et al., 2010) and with dietary restraint among college women (Sienko et al., 2016). Over the course of treatment, IWB may moderate the efficacy of existing health interventions for women who are overweight, as participants with high IWB do not experience improvements in disordered eating (Mensinger et al., 2016).

Existing literature has demonstrated associations between IWB, disordered eating, drive for thinness, and body image avoidance. CBT models suggest that drive for thinness and body image avoidance are underlying mechanisms of eating disorder pathology that are activated in the context of IWB, which in turn results in greater disordered eating. Although researchers have examined associations among variables of present interest partially, the proposed multiple mediation model has not been fully investigated. The present cross-sectional study was designed to directly investigate the proposed multiple mediation model.

Female students were recruited from a public university in Hawaii through an online research recruitment pool managed by the Department of Psychology. To be included in this study, participants had to identify as female, be 18 or older, and speak English.

The present research was approved by and was carried out in accordance with the recommendations of the University of Hawaii Institutional Review Board. All subjects gave written informed consent prior to participation in this study. Participants who enrolled in the study were asked to complete an anonymous online survey, including survey measures and demographic information. The following measures were used to assess internalized weight bias, disordered eating, drive for thinness, and body image avoidance.

The Weight Bias Internalization Scale – Modified (WBIS-M; Pearl and Puhl, 2014) is an 11-item self-report measure of IWB. This measure is a revised version of the original Weight Bias Internalization Scale (WBIS) by Durso and Latner (2008). Responses were rated on a 7-point Likert scale ranging from “Strongly Disagree” to “Strongly Agree”. The IWBS-M demonstrated high internal consistency (α = 0.90) and was positively correlated with BMI in a validation study (Pearl and Puhl, 2014). Similarly, the WBIS-M demonstrated high internal consistency (α = 0.95) and was significantly correlated with BMI (r = 0.47, p < 0.001) in the present study.

The Eating Attitudes Test (EAT-26; Garner et al., 1982) is a 26-item self-report measure used to detect symptoms and concerns related to disordered eating. Responses were rated on a 6-point Likert scale ranging from “Always” to “Never”. The EAT-26 demonstrated high reliability in a study of its psychometric properties among females with (α = 0.90) and without (α = 0.83) anorexia nervosa (AN; Garner et al., 1982). Additionally, the EAT-26 was highly correlated with the original 40-item scale, EAT-40 (Garner et al., 1982). In the present study, the EAT-26 had high internal consistency (α = 0.88).

The Eating Disorders Inventory - Drive for Thinness Subscale (EDI- Drive for Thinness; Garner et al., 1983) is a 7-item self-report scale that measures fear of weight gain and desire to lose weight. Responses were rated on a 6-point Likert scale ranging from “Always” to “Never”. The scale demonstrated high internal consistency among those who met criteria for AN (α = 0.85) and a female control sample (α = 0.85; Garner et al., 1983). Internal consistency of the EDI-Drive for thinness Subscale was high in the present sample (α = 0.92).

Descriptive statistics were run on demographic information to summarize the age, ethnicity, relationship status, and weight history of participants in our sample. We calculated the mean and standard deviation for all scales, and then examined the nature of the associations among the variables using bivariate correlations.

In order to examine the indirect effect of internalized weight bias on disordered eating through drive for thinness and body image avoidance, separately, a mediation analysis was conducted using a bootstrapping procedure based on the recommendation of A. F. Hayes (2013) and MacKinnon et al. (2007). The parallel mediation analysis was computed using the PROCESS macro for SPSS, version 3.4 (A. F. Hayes, 2013). The bootstrapping procedure constructed bias-corrected confidence intervals based on 5,000 random samples with replacement from the full sample (see: Preacher and Hayes, 2004, 2008). Direct effects, indirect effects, standard errors, and confidence intervals were estimated based on the distribution obtained using the bootstrapping procedure. A significant indirect effect indicates that the effect of IWB on the outcome variable disordered eating is accounted for by a mediating variable (e.g., drive for thinness), while controlling for the other mediator (e.g., body image avoidance). 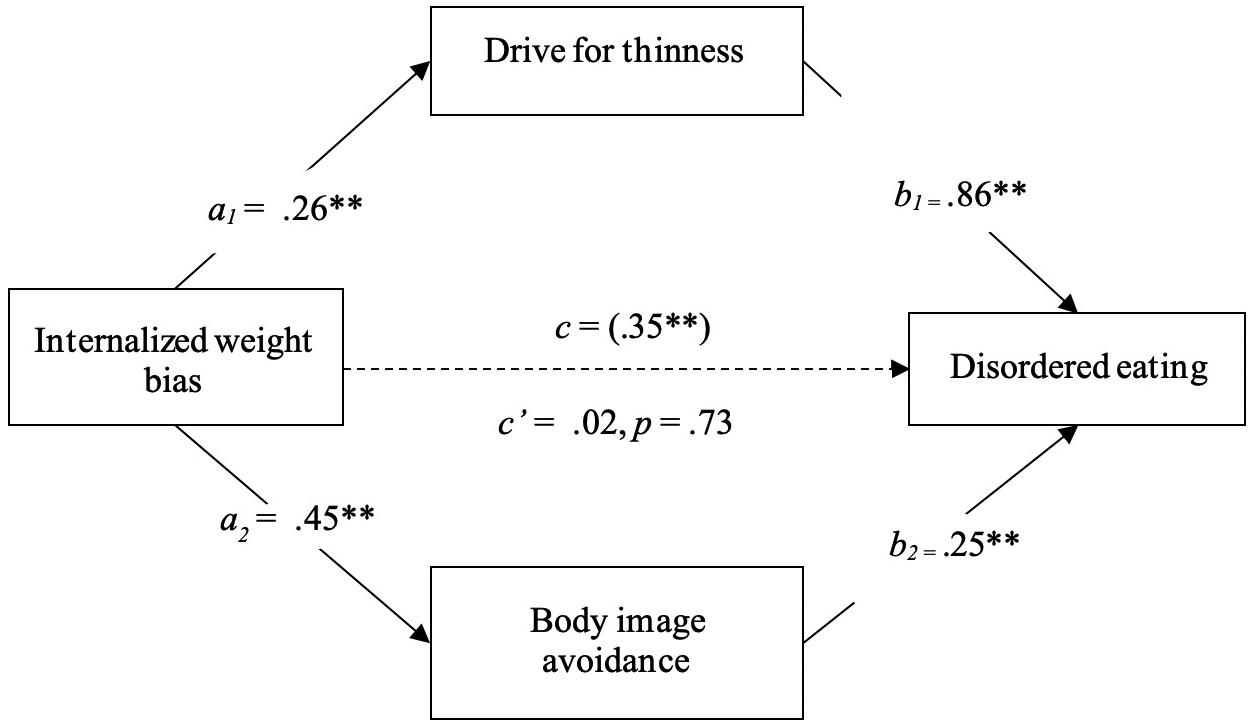 Figure 1. Mediation of the relationship between internalized weight bias and disordered eating by drive for thinness and body image avoidance. N = 225. The a-, b-, and c- paths indicate regression coefficients. c = total effect c’ = direct effect (when a and b are accounted for). Coefficients marked with an asterisk indicate significance, ∗∗p < 0.001, in terms of 95% bias-corrected confidence intervals that do not contain zero using 5,000 bootstrapped samples. Both mediator variables were considered simultaneously while controlling for the effect of one another.

Internalized weight bias is cause for concern due to its association with numerous undesirable psychological and physical health issues, such as low self-esteem and disordered eating. Disordered eating is one health outcome of present interest, given the prevalence and persistence of eating disturbances among college women (Eisenberg et al., 2011). Little is known about mechanisms of change in interventions that attempt to reduce IWB and associated disordered eating. Guided by CBT models of eating disorders and eating disorder treatment, the present study was designed to determine whether drive for thinness and body image avoidance mediated the relationship between IWB and disordered eating. IWB, disordered eating, drive for thinness, body image avoidance, and BMI were positively associated with each other. Results support previous findings indicating positive association between IWB and disordered eating (e.g., binge eating) among samples of community and college adults (Puhl et al., 2007; Durso et al., 2016; Mehak et al., 2018). Findings also suggest the potential generalizability of such associations to subgroups of ethnically diverse women who are often not included in studies of body image and eating concerns.

The current research lends itself to suggestions for future research. The present study included an ethnically diverse sample, including Asian, Caucasian, Native Hawaiian/Pacific Islander, Hispanic/Latina, and multiracial participants, but multiple groups were too small to permit conducting analyses by individual ethnic group. Examining the present mediation model across ethnic groups would allow researchers who work with diverse populations to confidently conceptualize relationships between variables of interest among those individuals. Future research would do well to recruit larger numbers of ethnically diverse individuals in order to facilitate greater generalizability of findings.

Findings from the current study have clinical implications for future prevention and intervention efforts targeting IWB and its association with eating disorder pathology. One might consider how the four variables of interest are experienced by a patient. A woman who attributes negative stereotypes (e.g., lazy, undisciplined) to herself due to her size or shape will likely avoid stimuli that trigger her body dissatisfaction while simultaneously making efforts to pursue a thinner body. In order to lose weight, the woman may avoid eating calorically dense foods with low nutritional value prior to experiencing unwanted binge eating episodes. This entire experience will reinforce the woman’s belief that she is undisciplined. Since drive for thinness and body image avoidance fully explain the association between IWB and disordered eating, interventions designed to prevent and/or reduce disordered eating among patients may be strengthened by explicitly targeting the mediators in addition to IWB. Such a multifaceted treatment would be closely aligned with cognitive-behavioral and acceptance-based intervention models, such as CBT, CBT-Enhanced (CBT-E; Byrne et al., 2011) and acceptance and commitment therapy (ACT; S. C. Hayes et al., 2006). CBT and ACT target IWB and disordered eating by undermining the negative impact of body image avoidance and drive for thinness. In light of current findings, use of interventions that challenge negative weight-based stereotypes (Carels et al., 2014), encourage body acceptance (Pearl et al., 2018), and facilitate cognitive defusion (i.e., identifying thoughts as products of the mind and not necessarily the truth; Lillis et al., 2009; Palmeira et al., 2017) may be beneficial for reducing IWB and associated negative outcomes.

Interventions for IWB often focus on individuals struggling with overweight or obesity (Berman et al., 2016; Levin et al., 2018; Pearl et al., 2018). Results from the present study show that while greater IWB is associated higher BMI scores, IWB also exists among females who are not overweight. This result is in line with other recent findings (Essayli et al., 2017), and indicates that females of varying sizes struggle with self-judgment based on their weight and shape. Women across the weight spectrum may be suffering from the deleterious psychological and physical impacts of IWB, including disordered eating. Future clinical interventions would do well to address IWB among individuals across the body weight spectrum.

Our findings should be interpreted in light of several notable limitations. First, the research explored a non-clinical sample. It is unknown if variables in the present study function similarly among those with clinical levels of eating disturbances. Additionally, an all-female sample was used because the variables of interest are thought to function differently between women and men (Smith et al., 2017; Puhl et al., 2018; Purton et al., 2019). The generalizability of the present findings to men is unknown. Future research that examines the relationship between IWB and disordered eating in men is encouraged. Additionally, the present study included a wider range of ages than is found in many college samples; however, the generalizability of the present findings to females under 18 or over 50 remains unclear. Another limitation includes the use of self-report measures. Participants may have been impacted by the social desirability bias, underreporting symptoms in order to present themselves favorably. The present study was correlational in nature, and for this reason, causal inferences cannot be made. Longitudinal and experimental research is needed to establish causation and determine the long-term effects of change in a particular variable (e.g., IWB).

The studies involving human participants were reviewed and approved by the University of Hawai‘i at Mānoa Institutional Review Board. The participants provided their written informed consent to participate in this study.

The authors received funding from the University of Hawai‘i at Mānoa, Department of Psychology for open access publication fees. The funders had no role in study design, data collection and analysis, decision to publish, or preparation of the manuscript.

Copyright © 2020 Marshall, Latner and Masuda. This is an open-access article distributed under the terms of the Creative Commons Attribution License (CC BY). The use, distribution or reproduction in other forums is permitted, provided the original author(s) and the copyright owner(s) are credited and that the original publication in this journal is cited, in accordance with accepted academic practice. No use, distribution or reproduction is permitted which does not comply with these terms.