The Influence of Sports Participation on Body Image, Self-Efficacy, and Self-Esteem in College Students

Objectives: This study aimed to explore the relationship between body image, self-efficacy, self-esteem, and sports participation by gender, grade, and specialty and then to provide a reference for promoting participation in sports and physical activities in college students.

Methods: Using stratified random sampling, undergraduate students in western China were selected as participants. The data obtained in this study were processed by SPSS 19.0 and AMOS 21.0 statistical software.

Body image refers to the image formed by the individual to one’s own body, which is the objective cognition, and subjective assessment of one’s own body characteristics. It is composed of appearance, body shape, physical strength, health, and other dimensions, and the degree of self-awareness will affect emotion and health behavior, such as weight control, personal social adaptation, psychological stress, self-development, and interpersonal relationship (Wang et al., 2017). In today’s highly developed network media, people tend to focus on their own body shape and appearance but ignore health. Overexposure of good body shape will lead to low body satisfaction, thus increasing the risk of suffering from chronic disease and mental disorders and inhibiting exercise participation (Yu et al., 2012; Gillen, 2015; Andrew et al., 2016; Sun et al., 2017). Relevant research found (Ricciardelli and McCabe, 2004; Hu, 2017) that the level of personal satisfaction with body image has a strong correlation with the degree of sports participation. The more positive the body image is, the higher the degree of sports participation is; on the contrary, those who are dissatisfied with their body images or hold negative body images have an inhibitory effect on exercise behavior. As the generation of exercise behavior comes from exercise motivation and intention, the generation of both derives from people’s cognition, assessment, and attitude. The better body perception and movement perception can make college students fully show themselves (Bandura et al., 1980), so the students’ self-efficacy will have an impact on their exercise participation behavior. The higher the self-efficacy is, the higher the exercise participation degree is; otherwise, the lower the exercise participation degree is (Sun, 2010; Koring et al., 2012; Parschau et al., 2013).

A total of 1,000 participants voluntarily participated in this study. This was sample randomized according to a stratified method by specialty and grade from a comprehensive university in Western China. With the help of physical education teachers and college psychological counselors, the survey was conducted anonymously after being approved by the ethics committee of Southwest University (approval no. 20190601C1). Of 1,000 questionnaires obtained, 887 were valid, with a return rate of 88.7%. For details, see Table 1. 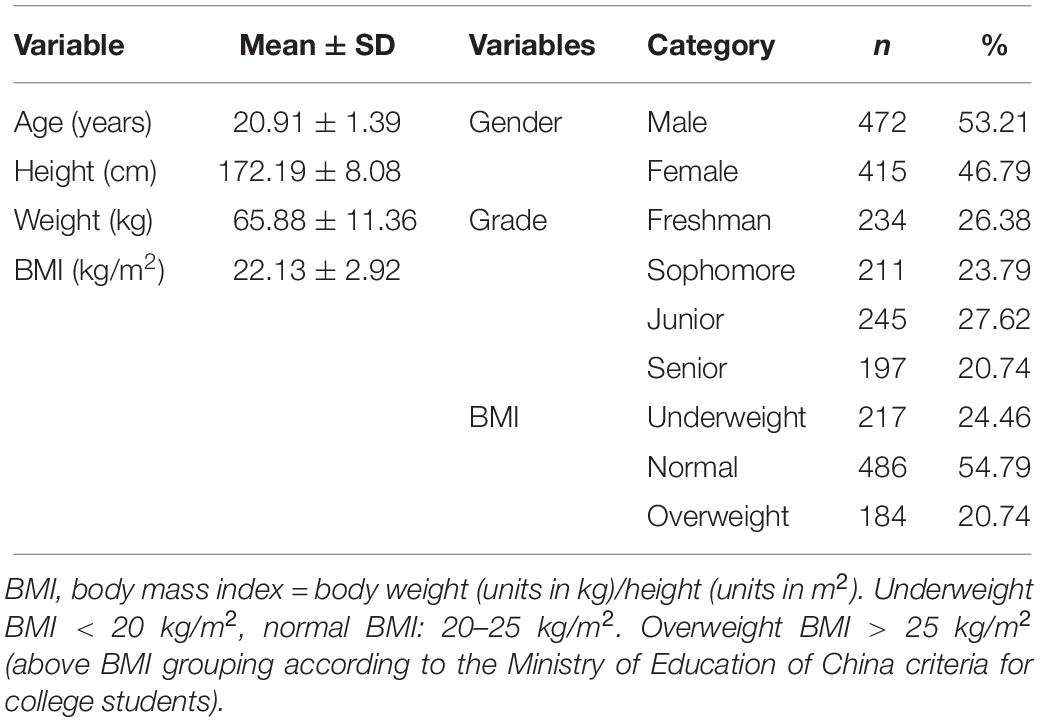 (2) The degree of sports participation scale

This scale has been developed by Wang et al. (2001), consisting of 10 questions. Each question had four options: “completely incorrect,” “somewhat correct,” “fairly correct,” and “completely correct.” The corresponding scores were 1–4 points, and the higher the total score, the stronger the self-efficacy.

Reliability and Validity of the Questionnaire

After four rounds of expert consultation, the expert scoring method was adopted, that is, whether the design of each question reflects the research subject to be explored and experts being asked to make an evaluation. Exploratory factor analysis and structural equation model were used to explore the potential structure of variables (Table 2). The structural validity and reliability of the three scales were explored separately.

Table 2. Reliability and structural validity statistics of the three scales.

It is not difficult to find the following from Table 2:

(2) Two common factors can be extracted from the self-esteem scale, and its cumulative contribution rate can explain 52.11% of the total variation. The internal consistency Cronbach alpha coefficients were 0.78, 0.74, and 0.80, respectively. The verification results of the measurement model were X2/DF = 1.639, and the values of the adjusted goodness-of-fit index (AGFI), comparative fit index (CFI), Tucker–Lewis index (TLI), incremental fit index (IFI), goodness-of-fit index (GFI), and root mean square error of approximation (RMSEA) were 0.943, 0.991, 0.980, 0.991, 0.979, and 0.051, respectively. The data indicated that the measurement model fitted well with the survey data. It showed that the scale structure had good validity.

(4) One common factor was selected from the self-efficacy scale, and the cumulative contribution rate could explain 53.21% of the total variance. The internal consistency Cronbach alpha coefficient was 0.82. The verification results of the measurement modeled showed that the values of X2/DF = 1.609 and that AGFI, CFI, TLI, IFI, GFI, and RMSEA were 0.931, 0.928, 0.962, 0.954, 0.946, and 0.036, respectively. The data indicated that the model and the data obtained by the survey fitted well, which revealed that the scale structure was better.

In order to examine the relationship of body image with self-esteem, self-efficacy, and sports participation and to test the mediating role of self-esteem and self-efficacy, according to the mediating effect test procedure of Wen and Ye (2014), this study analyzes the relationship of body image, self-efficacy, and sports participation using the structural equation model by AMOS software. The model was modified to obtain the final model (Figure 1). The model fitting indexes were X2/DF = 1.576 < 2.000, CFI = 0.996, GFI = 0.993, AGFI = 0.981, TLI = 0.991, IFI = 0.996, and RMSEA = 0.027, which indicated that the model can be established well.

Table 6. Decomposition table of path and its effects of body image acting on sports participation.

Impact of Personal Background on Body Image in College Students

This study found that female college students pay more attention to weight control and appearance adaptation, while male students care more about physical fitness and appearance evaluation, and it indicated that the females focused on their body and appearance more than the males, which was consistent with Zhang and Wang (2013) and other scholars, and it also was confirmed by Renée’s (2003) research. That is, the males emphasized masculine spirit, thereby by strengthening muscle and body training to present a physical image. In this study, it was found that the appearance adaptation score of freshmen was significantly lower than that of the senior.

Relationship of Personal Background With Self-Efficacy, Self-Esteem, and Sports Participation in College Students

The study found that males were more likely to have self-affirmation, self-efficacy, and sports participation than females. The reason for this may be that the males were better than the females in physical and motor skills, so they often participated in sports. At the same time, they can fully demonstrate themselves in their joy of sports and thus enhance their self-affirmation. This study found that freshmen had stronger self-denial, while seniors had a higher degree of exercise participation, and it also found that other grade students had less self-denial than freshmen. The reason may be that the freshmen’s incompatibility with the university model and their lack of maturity in their cognitive ability make them more likely to be in self-denial relative to other grades. The lower grades may be because the seniors had a lighter academic task and had more time for leisure, and the pressure of employment forced them to participate in sports to regulate their body–mind status. The study also found that BMI was significantly different in self-efficacy and sports participation. Students with normal weight were more active in self-efficacy and sports participation than other two groups; it indicated that those with normal weight were more attentive in self-efficacy and sports participation than those with underweight and overweight.

The shortcomings of this study were as follows: First, this study is cross-sectional, so we hope that future research can consider using the method of a follow-up study to further support the results of this study. Second, this study applies a holistic approach to explore the relationships among body image, self-efficacy, self-esteem, and sports participation. It is hoped that the successors can further explore and prove their relationships by gender, grade, BMI, and other background information. Finally, the research subjects of this study were composed entirely of university students in Western China; thus, future research could select a wider group of subjects to test the external validity of the results of this study.

The studies involving human participants were reviewed and approved by the Hospital Ethics Committee of Southwest University in China. The patients/participants provided their written informed consent to participate in this study.

All authors designed this study, and contributed to and approved the final manuscript. YO and JL carried out the protocol and questionnaire survey. KW recruited the individuals with drug addicts. TZ and LP undertook the statistical analysis and graphical representation of the data. GS revised the draft.

This study was supported by major projects funded by the Central University Fund (Grant No. SWU1909105).

Copyright © 2020 Ouyang, Wang, Zhang, Peng, Song and Luo. This is an open-access article distributed under the terms of the Creative Commons Attribution License (CC BY). The use, distribution or reproduction in other forums is permitted, provided the original author(s) and the copyright owner(s) are credited and that the original publication in this journal is cited, in accordance with accepted academic practice. No use, distribution or reproduction is permitted which does not comply with these terms.