Editorial on the Research Topic
Neurotransmitters and Emotions

Despite the central importance of emotions for human existence (LeDoux, 1995, 2000), many debates are still had over the definition of emotion, the number of discrete basic emotions that exists, and whether different emotions have different physiological signatures (Gu et al., 2015). Although there has been no shortage of psychological research on these matters involving emotions, many core issues remain unaddressed (Gu et al., 2016). However, discoveries on representations of emotions in the brain may shed light on the nature of the complex emotional processes. In the efforts of elucidating the neural basis of emotions, the majority of the work focused on identifying neural structures responsible for the experience of particular emotions, which culminated in the limbic system theory of emotion in the mid-twentieth century. This approach to emotions has outlined the neural anatomical basis of emotions, and located important structures involved in basic emotion (LeDoux, 2000). This is consistent with the proposal of Basic Emotion Theory, which suggests that every basic emotion has a specific brain locus. This work was demonstrated by fMRI studies. However, many recent studies revealed that multiple neural structures could be implicated in one particular basic emotion, while a specific area could attribute to a number of basic emotions. For example, the amygdala has been recognized as the central site for all negative emotions, including fear and anger (Gu et al., 2019). In all, inconsistent findings have invoked numerous disputations on the neural basis approach to the study of basic emotions (Lindquist et al., 2012, 2013; Gu et al., 2019).

Here, we introduce an alternative approach—neuromodulators—to the study of emotions. Instead of isolated small brain areas, we hypothesize that basic emotions derive from the widely projected neuromodulators, such as dopamine (DA), serotonin (5-HT), and norepinephrine (NE). Darwin proposed that phylogenetically lower animals, such as insects, also have basic emotions, but they have distinctly different brain structures with similar monoamine neuromodulators. Ever since its discovery, monoamine has been deemed as the substrate for emotions. Antidepressants affecting monoamine neuromodulators have been used for almost all affective disorders (Lovheim, 2012; Lohoff et al., 2014). Even decades later, monoamine-targeted drugs are still the first-line of pharmacological treatment for affective disorders, such as anxiety, phobia, and depression (Gu et al., 2018b). Human eyes are able to perceive all colors thanks to the three types of cone cells, with each type sensitive to one of the three primary colors. Similar to the perception of color, we herein propose a new theory of emotion—“three primary color model” of basic emotions (Figure 1) (Gu et al., 2018a, 2019)”—that emotion is a product from the mixture of the three monoamines (Lovheim, 2012; Gu et al., 2018a). This theory of emotion states that central DA is a hedonic signal for salient stimuli, such as food, sex, and other needs; central 5-HT is related to disgust or punishment; and central NE is the substrate for emotions that trigger “fight or flight” response, such as fear and anger (Gu et al., 2019). Many recent emotion experimental and theoretical studies surging up recently support this emotion theory based on the three monoamines (Lovheim, 2012). 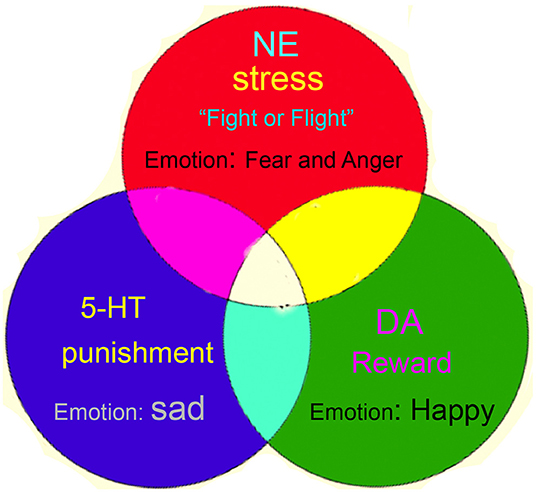 In addition to these monoamines, other hormones and neuromodulators may also be involved in a secondary pathway. For example, corticotropin-releasing hormone (CRH)—the stress hormone—might be involved in a pathway of central norepinephrine (NE) release (Simeon et al., 2007). The CRH induces the release of ACTH (adrenocorticotropic hormone), which can, in turn, alters physiological processes and behaviors (Chauhan et al., 2017). Ketamine, once known as a blocker to a particular glutamate receptor, has recently been used as an antidepressant (Yang et al., 2018). Oxytocin is believed to be related with love and attachment (Aguilar-Raab et al., 2019). Recent studies have proven that many neurotransmitters may play a pivotal role in emotions as substrates for emotions. Simply put, emotions are nothing but neuromodulators. We have solicited the most advanced studies evaluating the emotional functions of neurotransmitters, and accepted 11 peer-reviewed papers in this special collection.

Liu et al. introduced a literature review that probed into the relationship between the dysfunction of serotoninergic, noradrenergic, and dopaminergic systems with major depression disorders in multiple ways, such as animal studies and human imaging studies. They found that the altered monoamine neurotransmitter functions play a critical role in the mechanism of emotional disorders.

Gu et al. introduced three core affects: happiness, sadness, and stress, which are subsided respectively by three neuromodulators: dopamine, serotonin, and norepinephrine. Complex emotions are analogous to colors in the way that they are results of a proportional mix of the three core affects.

Ye et al. tried to relate the emotional neurotransmitters to the mechanism of Traditional Chinese Medicine.

Langenecker et al. presented genetic analysis with the serotonin transporter and monoamine oxidase A genes. Interestingly, they found that higher serotonin1A binding potentials were related to a substantial memory bias toward negative emotions.

Wei J. et al. reported their studies about the brain network involved in the development of blepharospasm, with a particular focus on inferior frontal gyrus, posterior cingulate cortex, and temporal gyrus.

Collectively, these studies strengthen the association between neurotransmitters and basic emotions. Owing to the intricate nature of emotions, studies aiming at its connection with neurotransmitters are necessarily complex and multifocal. We sincerely hope that you will enjoy reading all the papers in this special edition.

FW, JY, FP, RH, and JH all helped in writing the editorial.

This work was partially supported by a grant from Foundation of Humanities and Social Science in Ministry of Education in China (FW, 19YJAZH083).

Copyright © 2020 Wang, Yang, Pan, Ho and Huang. This is an open-access article distributed under the terms of the Creative Commons Attribution License (CC BY). The use, distribution or reproduction in other forums is permitted, provided the original author(s) and the copyright owner(s) are credited and that the original publication in this journal is cited, in accordance with accepted academic practice. No use, distribution or reproduction is permitted which does not comply with these terms.