Investigating the Relationship Between Creativity and Entrepreneurial Intention: The Moderating Role of Creativity in the Theory of Planned Behavior

As a conscious, planned, risky, and complex decision-making behavior, entrepreneurship is influenced by many factors in the process, among which creativity is a primary condition and entrepreneurial intention is an important driving factor for entrepreneurial behavior and action.

The paper is structured as follows. The section entitled, “Literature Review and Hypothesis Development” briefly reviews previous studies that touch on the relationship between creativity and entrepreneurial intention. The following section, “Aims and Hypotheses” introduces our hypotheses. The methodology and data are then presented in the section, “Materials and Methods.” The “Results” section then presents the relationships among the targeted variables. The paper concludes with a discussion of the contributions and limitations of this study in the final “Discussion and Conclusion” section.

The Theory of Planned Behavior Model

Creativity is an important component of individual cognitive processing, and has the ability to generate new and valuable ideas by recombining and matching information and knowledge (Zhang and Zhang, 2018). The divergence in the academic circle on the definition of creativity is wide. There are more than 100 definitions of creativity in various literatures (Meusburger, 2009). Creativity theory defined the leading factors affecting creativity as “four P’s,” namely process, product, person and place (Rhodes, 1961). In the cognitive method, researchers paid special attention to the process of creativity and tried to describe the mechanism and technology of creative thinking. For example, Torrance (1966) defined creativity as a process, that is, first, a person is aware of problems, defects, and disagreements which are difficult to identify, and then it is necessary to find solutions and put forward hypotheses, and finally to test and modify these hypotheses to deliver a successful outcome. With the emergence of the psychological measurement method of creativity initiated by Guilford et al. (1952), many studies also showed that creativity actually involved more abilities, such as the ability of openness, hierarchical thinking, autonomy, exploratory behavior, etc. If environmental factors are taken into account, creativity will be associated with factors such as autonomy and resource access. The characteristics of a creative lifestyle are unqualified attitude, behavior, and flexibility (Sternberg et al., 2012).

In the field of economic production, many scholars pay more attention to the relationship between creativity and products. For example, Mumford (2003) thought that creativity involved the production of novel and useful products, while Sternberg et al. (2012) suggested that creativity meant the production of “original and valuable things.” Some economists regard creativity as an important element of recombining elements to generate new technologies and products, to promote economic growth (Bloom et al., 2013). Therefore, the impact of creativity on the economy should not be ignored.

H3: Subjective norms have a positive effect on entrepreneurial intention.

H4: Creativity has a positive effect on entrepreneurial intention. 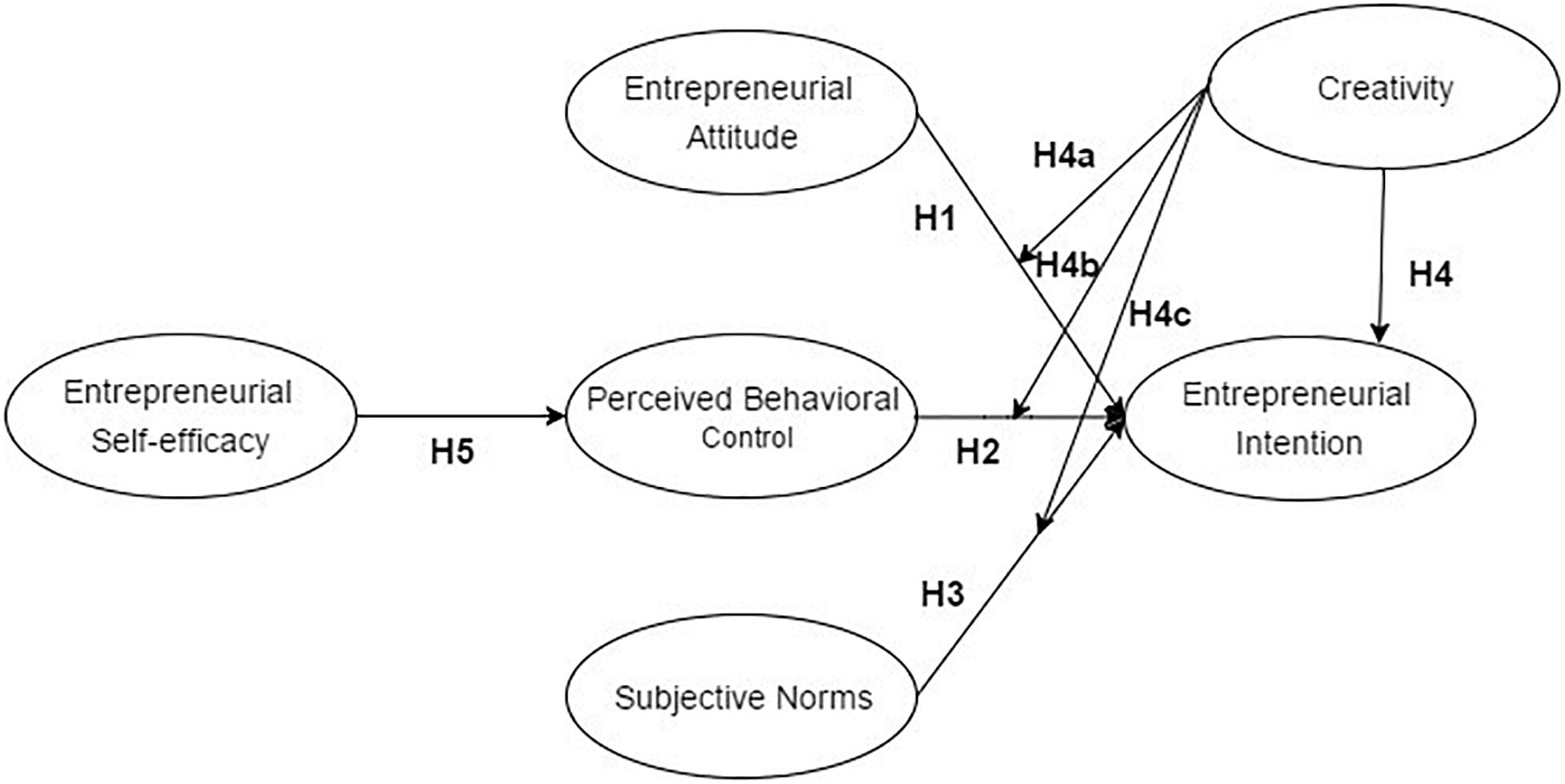 Figure 1. The proposed structural relationships between creativity and entrepreneurial intention based on the theory of planned behavior model.

The survey was conducted in Zhejiang province, which has the most developed private economy and Internet economy in China. As one of the more developed provinces of China, Zhejiang province, also considered as China’s answer to Silicon Valley, is home to e-commerce giants like Alibaba Group Holding and NetEase. The technological start-ups in Zhejiang have contributed largely to its rising “new economy” where the provincial government has also capitalized on the role of entrepreneurship as its model for development (Zhang, 2018). The researchers first undertook a pilot study by distributing 100 questionnaires to students at Zhejiang University. Eighty two effective questionnaires were received, an effective questionnaire recovery rate of 82%. After testing and analysis, the CITC method was used to remove three questions with a correlation coefficient of less than 0.5. The final questionnaire was composed of 45 questions.

To reduce the sample selection bias, the survey was carried out in various locations with different cohorts and the questionnaires were administered randomly. To meet the research needs, from January 4, 2019 to February 28, 2019, the formal survey selected university students in Zhejiang as the sample selection range, controlled the respondents from the major, grade, gender and other aspects, and strived to meet the normal distribution of data. The coordinator contacted different universities in Zhejiang with an invitation to take part in the survey. If the universities agreed, they completed a registration form that indicated how many students would take part. The purpose of the research was outlined to the participants and a small incentive was provided to the respondents to compensate them for their time for completing the questionnaire. Six hundred and six questionnaires were distributed, and after excluding 83 invalid questionnaires, 523 valid questionnaires were obtained, a recovery rate of 86.45%. 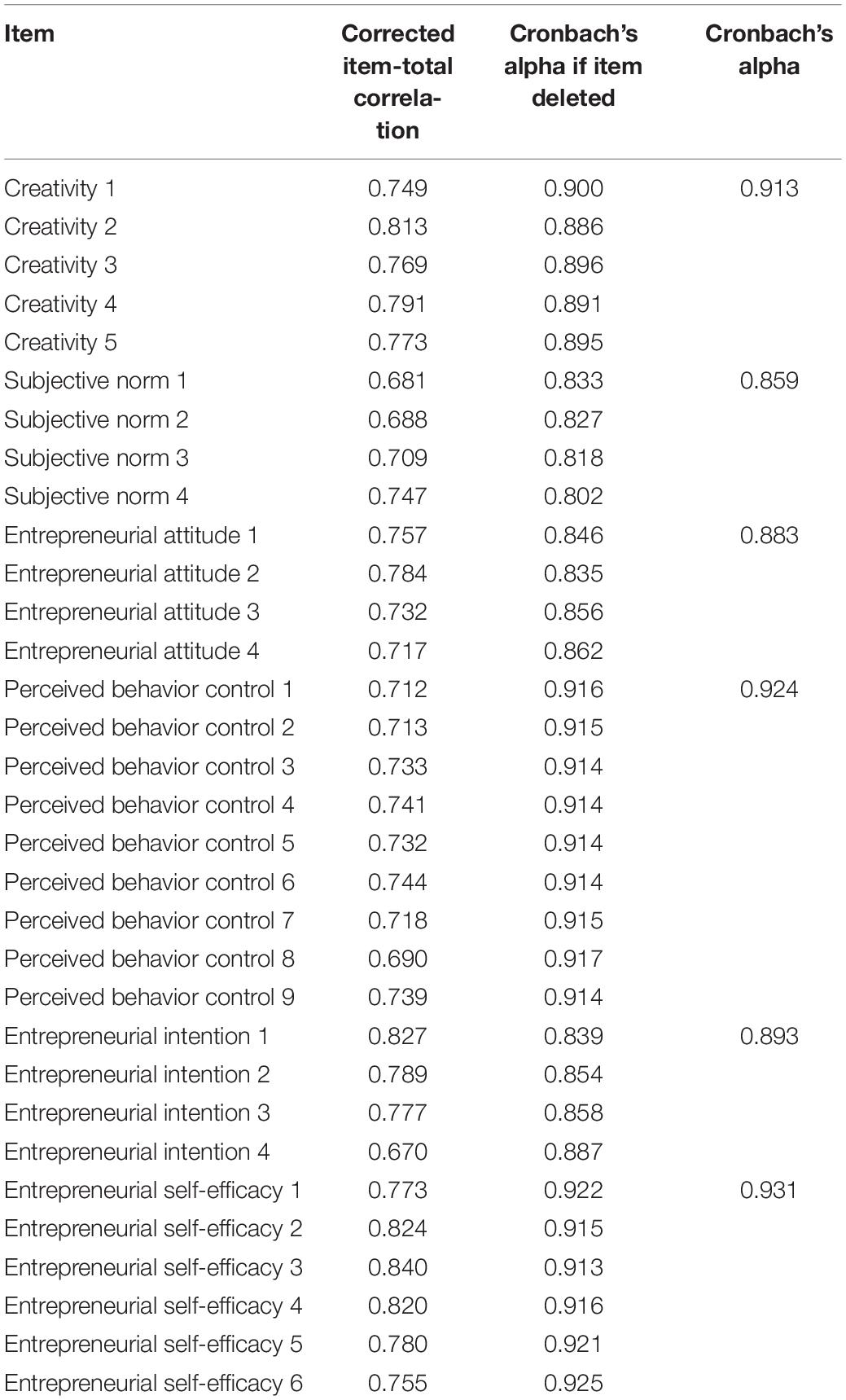 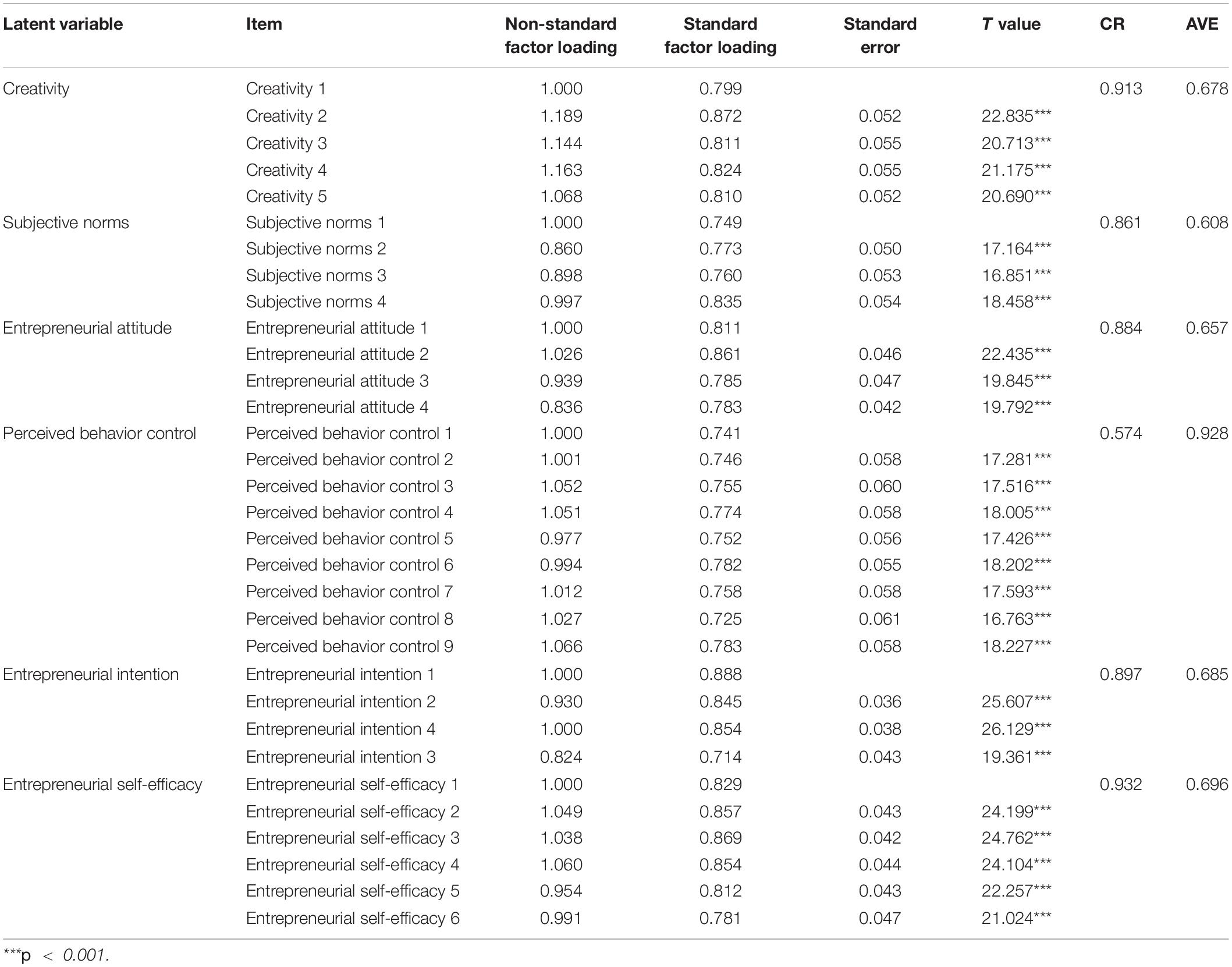 From the discriminant validity in Table 3 it can be seen that there is a positive correlation among the variables. The largest correlation coefficient between the studied constructs is 0.741 (between perceived behavior control and creativity). The figures also demonstrate that the square root of AVE value above the diagonal is greater than the correlative coefficient between the dimensions below the diagonal, indicating that the scale has a good discrimination validity.

According to Table 4, exploratory factor analysis of all the questions of the questionnaire shows that the KMO is equal to 0.960, greater than 0.7, and the significance of Bartlett’s test is less than 0.001, less than 0.05 indicating that the scale is suitable for factor analysis. In addition, the analysis results show that the cumulative variance explanation percentage of the first factor extracted is 35.434%, less than 40%, and also less than half of the total variance of 73.249%, indicating that there was no common method difference bias.

From Table 5’s exploratory factor analysis of the rotated component matrix, it can be seen that the maximum factor load of each question of the six dimensions is on the common factor, and the factor structure is coincided with the dimension structure of the questionnaire, indicating that the scale has a good result validity. 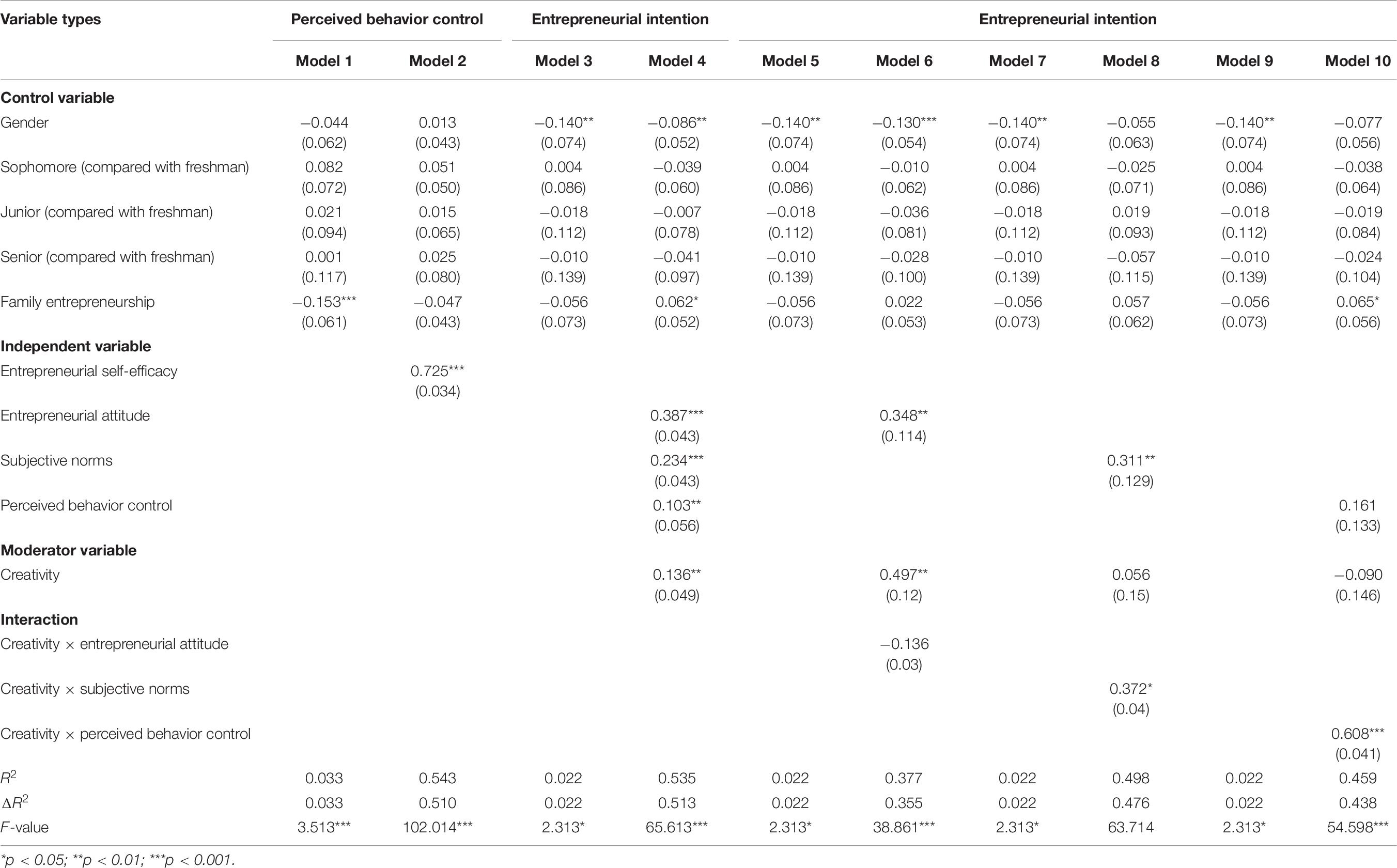 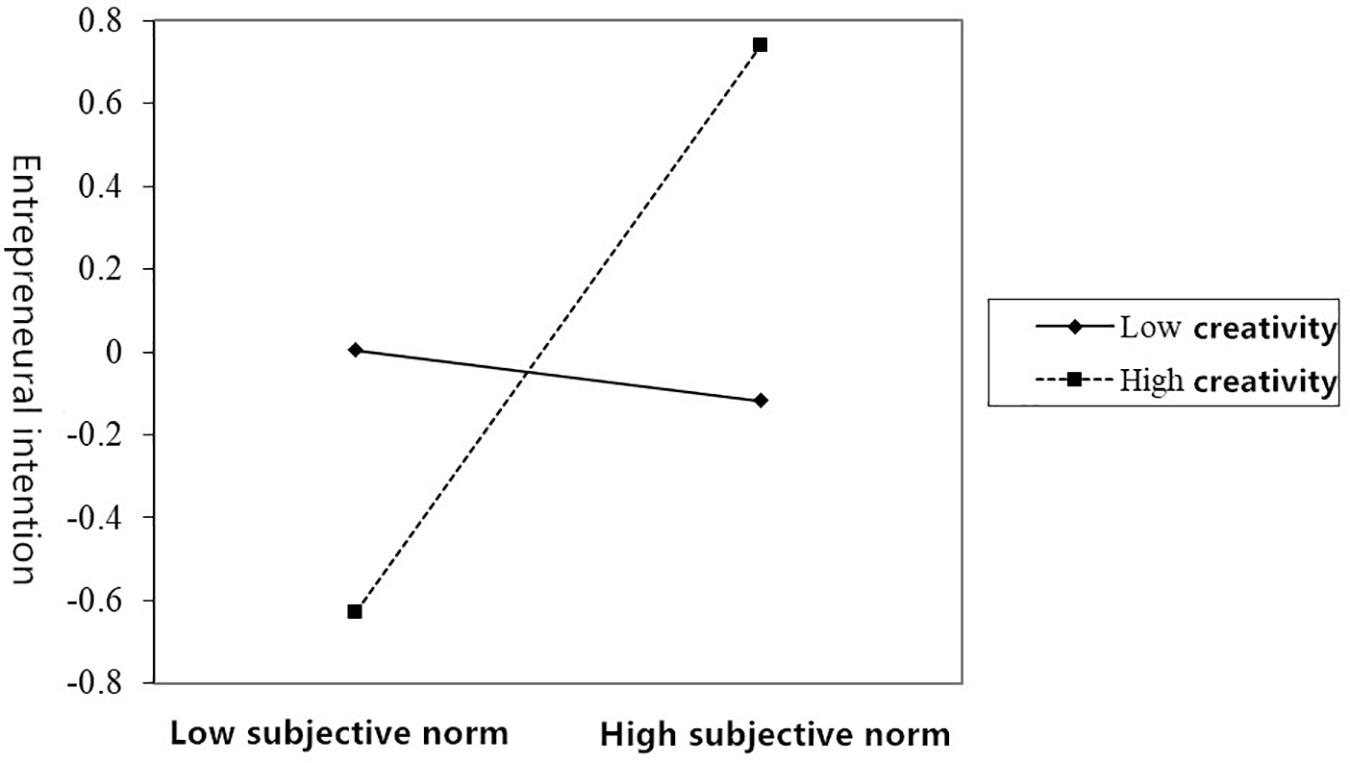 Figure 2. A line chart of the moderating effect of creativity between subjective norms and entrepreneurial intention. 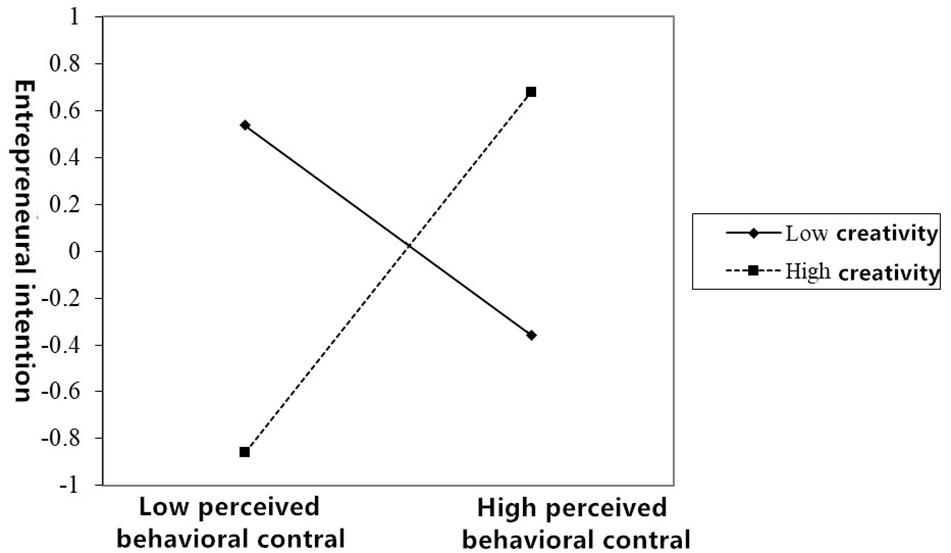 Figure 3. A line chart of the moderating effect of creativity between perceived behavior control and entrepreneurial intention.

The study was reviewed and approved by Wenzhou University Ethics Committee. Written informed consent to participate in this study was provided by the participants.

Copyright © 2020 Shi, Yuan, Bell and Wang. This is an open-access article distributed under the terms of the Creative Commons Attribution License (CC BY). The use, distribution or reproduction in other forums is permitted, provided the original author(s) and the copyright owner(s) are credited and that the original publication in this journal is cited, in accordance with accepted academic practice. No use, distribution or reproduction is permitted which does not comply with these terms.