A Commentary on
Commentary: Acetaminophen Enhances the Reflective Learning Process

We are writing in response to a commentary by McPhetres (2019), who misrepresented our work regarding the differential impact of acetaminophen on reflexive vs. reflective learning (Pearson et al., 2018). His commentary begins with a summary that fails to discuss or even acknowledge our actual theoretical framework. Instead, McPhetres discusses an unreasonable extrapolation of our findings that he has imagined: namely, a “smart pill” that improves learning writ large.

Our actual research hypothesis and findings are not remotely this extraordinary. On the contrary, they are grounded in theory emphasizing the contribution of serotonin to the balance between two modes of self-regulation, namely the Competition between Verbal and Implicit Systems model (COVIS) of learning and decision making. Our hypothesis was that serotonin—not acetaminophen per se—biases neural systems toward reflective learning at the expense of reflexive learning. Acetaminophen was a convenient tool for manipulating serotonin without the logistical hurdles of administering a prescription SSRI, with the obvious caveat of having non-serotonergic effects as well.

McPhetres goes on to use selective quotations to support his thesis that our research implications are “severely overstated.” One of these is “… acetaminophen could potentially help people make difficult decisions by reducing emotional responses to affective contexts while at the same time facilitating more deliberative, effortful information processing…” The full quote from our paper makes clear that this idea originates from another study and that readers should regard it as speculation:

Another is, “We found that reflective-optimal decision-making can be enhanced by acetaminophen.” McPhetres fails to give us credit for the sentences that immediately follow this ‘‘overstatement”:

“It is important to note that some of the analyses yielded non-significant results (e.g., overall accuracy for the reflective-optimal task did not differ between groups) and that other findings (e.g., acetaminophen reduces the likelihood that criterion was met for the reflexive-optimal task) emerged from exploratory analyses. Thus, these findings should be considered preliminary and need to be interpreted with caution until they are replicated” (p. 1,033).

We fail to see how one could interpret this (the bulk of the concluding paragraph) as overstating anything, much less as an encouragement to take Tylenol as a “smart pill.” Moreover, we found that acetaminophen does not improve and may worsen information integration (reflexive learning)—something McPhetres forgot to mention.

2. He mistakenly lists “depression scale” as an additional measured variable and “low score on depressive symptoms” under “vague exclusion criteria.” In fact, not being depressed (i.e., below a pre-determined cut-off score) was part of the eligibility screen to enroll in the study.

3. Out of 100 participants, 6 were excluded for protocol violations (not starting task 60–75 min after treatment administration or, in one case, sleeping during the task), and 7 were excluded because their mean performance was at or below chance responding, a customary exclusion criterion for eliminating random responders. Contrary to what McPhetres imagines, we did not drop these participants to lower our p-values. In the interest of transparency, we reran all analyses with all available data. None of our conclusions would have been altered by the exclusion criteria. In fact, most p-values would have been smaller had we included all participants. The statistical code and output for both original and updated analyses, along with an extensive explanation of every step in the data analysis, are documented in the following blog post: https://jashu.github.io/post/apap/.

4. McPhetres falsely asserts that trials-to-criterion and learning-rate analyses were exploratory (alleged examples of HARKing), so he apparently regards accuracy as our only confirmatory outcome metric. In fact, trials-to-criterion and learning curves—not accuracy—were the only outcomes used in our prior work (Maddox et al., 2015). Why would McPhetres consider two metrics with prior empirical support to be “exploratory” and the completely new metric to be “confirmatory?” Clearly, we always planned to test our hypothesis with all three approaches, regardless of the p-value obtained for any single one. 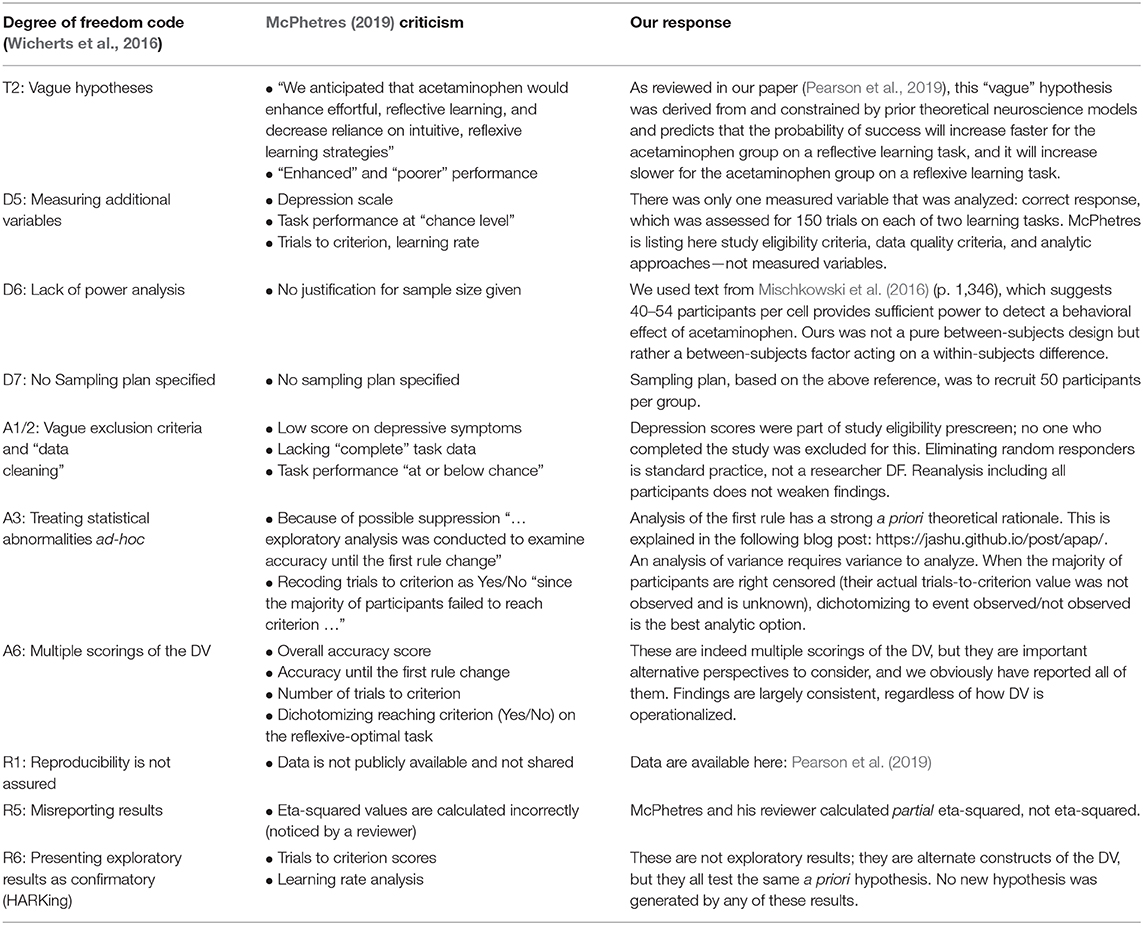 Table 1. Reproduction of table from McPhetres (2019) with our response to each point raised.

We agree with McPhetres that these results need to be replicated; indeed, we say so in the article. But that would still be true if all our p-values were less than 0.005, or if none of them was less than 0.05. P-values from one study alone never provide strong evidence either for or against a hypothesis—period. But we disagree that we should have replicated all findings prior to publication. It would be different had we found something dramatic and unexpected (e.g., that acetaminophen increases GPA), or if we were advocating something ridiculous (e.g., that acetaminophen be used as a study aid). What we find baffling is that McPhetres seems to believe that if the reported effects are true then these incredible applications would follow, hence his concern that lay persons will overdose on Tylenol in an attempt to make themselves smarter. Even if all our findings replicate perfectly, they do not begin to support such outlandish applications.

We tried to test a theory about serotonin modulation of learning systems, and we tried to conduct reasonable analyses to inform that theory. Our only regret is that we did not make publicly available our data and statistical code at the time of publication, which left a vacuum for one reader's imagination to run wild. We believe in open science and reproducible research, and we encourage interested readers to visit our repository (Pearson et al., 2019) and evaluate our data for themselves.

JS wrote the first draft of this commentary and all authors provided critical revisions. All authors approved the final version of the commentary for publication. JS also wrote a blog post to complement this commentary, which, in addition to reproducing the published analyses, also details several analysis-related issues associated with the original study. This blog is available at: https://jashu.github.io/post/apap/.

Copyright © 2020 Shumake, Pearson, Koslov, Hamilton, Carver and Beevers. This is an open-access article distributed under the terms of the Creative Commons Attribution License (CC BY). The use, distribution or reproduction in other forums is permitted, provided the original author(s) and the copyright owner(s) are credited and that the original publication in this journal is cited, in accordance with accepted academic practice. No use, distribution or reproduction is permitted which does not comply with these terms.