Nostalgia, defined as a sentimental longing for the past, is a common emotion that serves a host of psychological functions (Routledge et al., 2013). Specifically, nostalgia boosts positive affect, increases positive self-regard, fosters feelings of social connectedness, and serves as a reservoir of meaning. Nostalgic recollections typically include the self as the central character within a meaningful social context and contain more positive rather than negative affective content (Wildschut et al., 2006). Although recent research has illuminated much about the consequences and content of nostalgic reflection, research has yet to examine the relationship between nostalgia and memory recall perspective. Memories can be recalled from first or third person perspectives (Nigro and Neisser, 1983). When engaging in first person perspective recall, individuals recall the memory from their original point of view, whereas individuals engaging in third person perspective recall see themselves in the memory, not from their original point of view, but how an observer might view the event. Autobiographical memory research suggests that the visual perspective from which memories are recalled has important consequences for how memories are experienced (Sutin and Robins, 2008). The present research provides insight into the relationship between memory recall perspective and the positive affective consequences of nostalgic reverie.

Research suggests common elements within nostalgic narratives. Wildschut et al. (2006) instructed participants to write about an event for which they felt nostalgic. Content analyses revealed that although these narratives contained aspects of both positively and negatively valanced emotions, the frequency of positive emotions was three times that of negative emotions. Additionally, nostalgic narratives overwhelmingly took on a redemptive rather than contaminating quality. That is, rarely did events turn from positive to negative, but much more often were described as shifting from negative beginnings to positive endings. Further analyses revealed that nostalgic narratives typically feature the self as the central character situated within a social context populated by significant others (e.g., family and friends). Moreover, events commemorating symbolically meaningful cultural ritual or tradition (e.g., holidays, birthdays, and graduations) are likely to be the focus of nostalgia. In sum, content analyses reveal that nostalgic narratives are predominantly positive, redemptive, self-focused, and situated in a broader context of significant others and meaningful life events.

Participants completed materials online and in the order described below.

After providing informed consent, participants were randomly assigned to recall either an event for which they felt nostalgic or an ordinary past event and to further reflect upon the memory from either a first or third person perspective. All participants then completed a variety of measures, including a measure of affect (Watson et al., 1988), authentic living (Wood et al., 2008), self-esteem (Rosenberg, 1965), and meaning in life (Steger et al., 2006)1. Finally, all participants read a debriefing page and were provided information about receipt of compensation.

Participants completed a two-item recall event manipulation check (“Right now, I am feeling quite nostalgic” and “Right now, I am having nostalgic feelings”) using 1 (strongly disagree) to 7 (strongly agree) scales. Scores on the two items were combined to create a composite (M = 4.76, SD = 1.85, r = 0.946).

Participants indicated their age, gender, ethnicity, race, native language, and any suspicions, thoughts, or feelings, about the study. 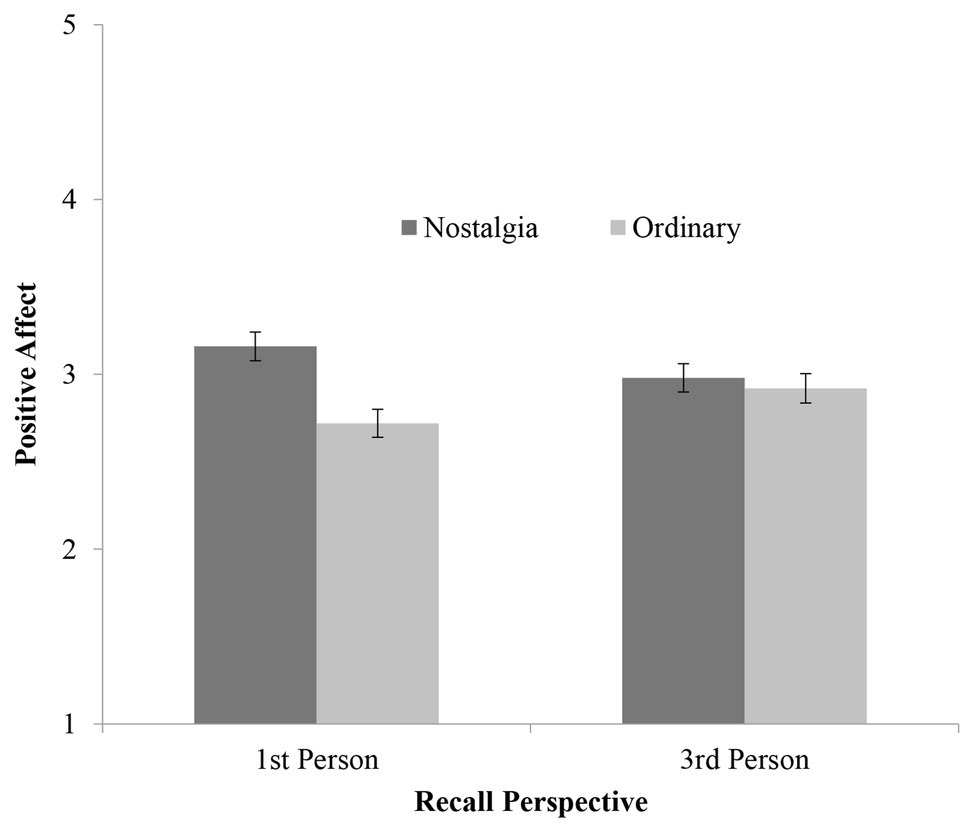 These initial findings may have methodological implications for nostalgia-related research. Often when the type of recalled event is manipulated in research studies, participants in the nostalgia condition are prompted to take a few moments to immerse themselves in the experience of the event for which they are nostalgic (e.g., Vess et al., 2012). Given that emotional engagement is more strongly associated with first person perspective recall (e.g., Williams and Mould, 2007; Holmes et al., 2008), such a prompt encouraging immersion in the nostalgic memory may promote recalling it from a first person perspective and thus aid in facilitating the positive affective outcomes that follow.

This research includes limitations and future directions to note. As this study is an initial examination of memory recall perspective’s impact on the positive affective consequences of nostalgia, future research is required to both corroborate and more extensively explore the relationship between memory recall perspective and nostalgic reflection. Relatedly, relevant effect sizes are small to moderate, yet are comparable to those typically observed in experimental social psychology research (Funder and Ozer, 2019). The above illuminate potential routes for further research. For example, future research should examine the extent to which, compared to other types of memory, nostalgic reflection naturally occurs from a first or third person perspective. Such research could potentially provide additional insight into nostalgia’s function as a source of positive affect. Given that memories recalled from a first person perspective tend to be more affect-laden, nostalgia’s effectiveness as a fount of positive affect may be influenced, in part, by a propensity to recall memories for which one feels nostalgic from a first person perspective.

Relatedly, research indicates that compared to non-depressed adolescents, depressed adolescents were more likely to recall autobiographical memories from a third person perspective (Kuyken and Howell, 2006). Furthermore, depressed adults remembered more positive memories from a third person perspective compared to adults who were not depressed (Legmogne et al., 2006). As research reviewed previously indicates, third person perspective recall is associated with affective distancing and detachment. Given the current findings that when recalling memories from a first person perspective, nostalgic reverie, compared to recalling an ordinary past event, resulted in higher positive affect; future research could examine how encouraging first person perspective nostalgic reflection among people living with depression may potentially produce more positive affective engagement, as well as other beneficial outcomes. Indeed, recent research explored the potential impacts of nostalgia-themed (vs. neutral) public service announcement videos about a college counseling center among a sample of college students living with depression (Hussain and Alhabash, 2020). Participants who viewed the nostalgia-themed video indicated greater positive emotion (e.g., warm and joyful) compared to those who viewed the neutral video. This effect led to more positive attitudes toward the counseling center and in turn, to greater behavioral intentions to contact the counseling center in the future.

Finally, research from a mood congruence model (MCM) perspective indicates that chronically sad people perceive mood incongruence when recalling a positive past self (Gebauer et al., 2008). This mood incongruence fosters a perception of greater temporal distance between the current (sad) self and the past (happy) self, resulting in a contrast effect and a decrease in self-esteem. However, nostalgia-related research has indicated that negative mood and loneliness can trigger nostalgia, which sometimes then serves to increase self-esteem (Wildschut et al., 2006). Perhaps these divergent findings could be reconciled by considering memory recall perspective. If, when in a negative mood, nostalgic reflection (compared to reflection on a past positive self) is engaged via a first person perspective, perhaps emotional connection with a “nostalgic self” fosters feelings of temporal recency despite mood incongruence. Future research should examine whether nostalgic reverie triggered by negative mood leads to increases in self-esteem, at least in part, via the emotional engagement characteristic of a first person perspective recall, whereas reflection on a positive past self leads to reduced self-esteem by way of the mechanisms outlined in the mood congruence model.

The studies involving human participants were reviewed and approved by Institutional Review Board, Ohio University. The patients/participants provided their written informed consent to participate in this study.

Copyright © 2020 Rogers. This is an open-access article distributed under the terms of the Creative Commons Attribution License (CC BY). The use, distribution or reproduction in other forums is permitted, provided the original author(s) and the copyright owner(s) are credited and that the original publication in this journal is cited, in accordance with accepted academic practice. No use, distribution or reproduction is permitted which does not comply with these terms.