Change in Evaluation Mode Can Cause a Cheerleader Effect

Barney Stinson, a main character in the television series How I Met Your Mother, hypothesized that people are perceived as being more attractive in a group than when perceived individually; he called this phenomenon the cheerleader effect. Walker and Vul (2014) introduced this term into scientific discourse and provided the first empirical evidence for the effect.

We chose a design in which four theories differ in how they predict the cheerleader effect, and we chose a situation that corresponds to a real-time situation, one where an observer sees an unknown person for the first time. This has some relevance, for example, for people who decide to post a selfie on social media. The question is whether faces are perceived as more attractive in isolation or together with flanking faces. Furthermore, we want to investigate if it matters if the flanking faces are less, equally, or more attractive than the target face.

Change in the Evaluation Mode Between Separate vs. Joint Evaluations 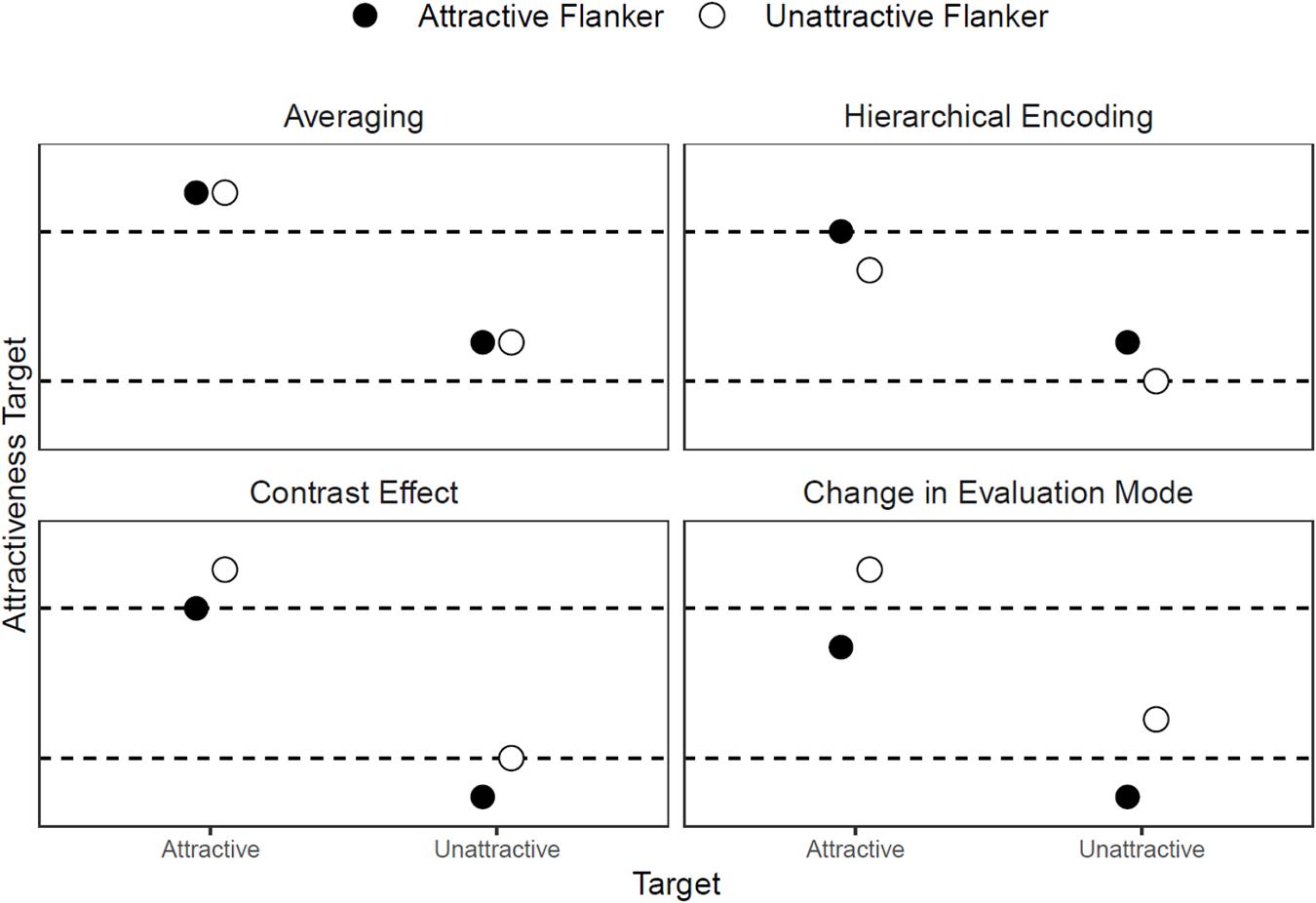 Consequently, a study in which target face attractiveness and flanking faces’ attractiveness are manipulated independently would provide evidence of the processes underlying the cheerleader effect.

The cheerleader effect has mainly been studied by cognitive psychologists, whereas the evaluation mode has been mainly studied by behavioral scientists. As a result, the research traditions differ in their units of analysis. In cognitive psychology, faces provide the unit of analysis. A few participants rate many faces in a within-subject design and ratings for each face are aggregated. The cheerleader effect is calculated by analyzing a sample of faces. In behavioral science, the units of observation are typically participants, and often in a between-subject design. In the case of the cheerleader effect, both strategies are possible. However, they differ in the interpretation. Focusing on faces provides an impression of the variance of face attractiveness when adding flanking faces. Focusing on participants gives an impression of the variance of human judgments when adding flanking faces. Studies of the cheerleader effect have typically analyzed faces as units of observation. For this reason, we did this as well. However, we decided that each face should be rated by each participant only once. This corresponds to a situation where an observer evaluates an unfamiliar face for the first time. In this regard we differ from previous studies that have investigated the cheerleader effect.

The sample size was determined before any data analysis was carried out. Because some studies have replicated the cheerleader effect (Carragher et al., 2018, 2019; Ying et al., 2019) while others failed to do so (van Osch et al., 2015), it is hardly possible to estimate the effect size. A recent study (Ying et al., 2019) used six faces, which were evaluated by 20 participants. In this study, the number of evaluated faces was increased to 24 and we decided to recruit 600 participants. The study was conducted with more participants than those of former studies because in this study, each participant only rated 12 different faces and each face only once. This corresponds to a situation where an observer evaluates an unfamiliar face for the first time. Thus, the attractiveness of each face in each condition was rated by at least 94 participants.

The participants were all United States residents and were contacted via Amazon Mechanical Turk. A total of 605 participants completed the study; 19 failed to pass an attention check and were dismissed. Of the remaining 586 participants, 240 were female, 343 were male, and three identified as non-binary. The mean age was 37.16 (SD = 11.23, range = 18–73).

After participants provided their informed consent, they were instructed to rate the attractiveness of the face in the middle of the screen on a scale from 0 (not at all attractive) to 100 (extremely attractive). Each participant rated 12 faces. For each face, the mean attractiveness rating served as the dependent variable. The participants were shown faces from the Chicago Face Database (Ma et al., 2015), which contains highly standardized pictures grouped according to gender, age, and race. All faces are depicted from a frontal perspective and have a neutral facial expression. For each face, there is an attractiveness rating, which allows for a selection of faces of the same gender and race and of similar attractiveness. Twenty-four sets of faces containing three faces that did not differ in gender or race (White, Hispanic, African–American, and Asian) and that were similar in their attractiveness were selected. Half of the faces were male and half female.

Typically, online experiments contain an attention check to filter out participants who did not read the instructions carefully. After measuring the dependent variable, participants were shown a picture of a dog’s face and instructed to click on a scale from 0 to 100, but only within the range of 20–30. This served as an attention check.

Following the manipulation check, the participants rated the attractiveness of one actor and one actress. As these data are not relevant for this article, they are not included in the results. Finally, the participants answered demographic questions.

Simultaneous and Sequential Presentation of Faces

Similar to memory-based judgments are situations where people evaluate a face online and compare it with a formerly viewed face. Such situations attest to two opposing influences: on the one hand a face is rated as more attractive when it follows a face of low attractiveness (Pegors et al., 2015; Ying et al., 2019), while on the other hand a face is rated as more attractive when a face of high attractiveness precedes it (Pegors et al., 2015). Therefore, judgments of the perceived attractiveness of flanked faces may differ when they are recalled compared to when they are made in real time. In addition, there is evidence that the cognitive processes differ if the observer evaluates a group of faces simultaneously or sequentially (Ying et al., 2020).

Judgments are not always formed in contrast to something; they can be formed in assimilation toward something as well (Sherif et al., 1958; Mussweiler, 2003; Bless and Schwarz, 2010). Assimilation corresponds to the idea of hierarchical encoding. An explanation of the cheerleader effect based on hierarchical encoding is based on two assumptions: First, observers calculate the mean attractiveness of faces they see simultaneously; second, observers differentiate between the target face and other faces and bias their evaluation of the attractiveness of the target face toward the main attractiveness of the group of other faces. While evidence for the first assumption exists (Luo and Zhou, 2018), no such evidence exists for the second assumption (Luo and Zhou, 2018; Carragher et al., 2019; Ying et al., 2019). However, it is possible that additional redundancy would facilitate differentiation between the target face and the flanking faces and foster hierarchical encoding.

The change in evaluation mode has a high impact on marketing practice. A seller of low-budget products (e.g., a cheap-looking watch) presents the products alongside other low-budget products (other cheap-looking watches), while the seller of luxury goods presents the products separately (Hsee and Leclerc, 1998). This article provides evidence that similar processes are relevant for self-marketing, assuming the goal is that observers evaluate one’s attractiveness highly when one posts selfies on social media. One appears more attractive in a selfie with other people than in isolation, as long as the other people are equally or less attractive. The higher one’s own attractiveness, the less one benefits from this effect; however, it is not beneficial to post a selfie taken with other people in the frame if the attractiveness of these other people is high. Finally, the more unambiguous one’s attractiveness, the less one is affected by flanking faces.

The datasets presented in this study can be found in online repositories. The names of the repository/repositories and accession number(s) can be found below: the material and the data are available at https://osf.io/qhjxs/?view_only=0d857d0514604aeca912a3202ee3c74f.

The studies involving human participants were reviewed and approved by Ethics Committee of the Faculty of Business, Economics, and Social Science of the University of Bern (Project Number: 102019). The patients/participants provided their written informed consent to participate in this study.

Copyright © 2021 Messner, Carnelli and Höhener. This is an open-access article distributed under the terms of the Creative Commons Attribution License (CC BY). The use, distribution or reproduction in other forums is permitted, provided the original author(s) and the copyright owner(s) are credited and that the original publication in this journal is cited, in accordance with accepted academic practice. No use, distribution or reproduction is permitted which does not comply with these terms.