Obsessive–compulsive disorder (OCD) is the fourth most common psychiatric disorder following depression, alcohol dependence, and phobia, with obsessions and compulsions as the main symptoms (De Putter and Koster, 2017). The lifetime prevalence of OCD is 1–3%, and the 12-month prevalence in China is 1.63% (Huang et al., 2019). OCD can hinder the quality of life and social function of individuals and bring serious damage to individuals and their families (Medeiros et al., 2017). It is one of the main clinical features of neurological diseases, which plays an important role in their pathogenesis. Studies have found that the incidence of OCD with comorbid anxiety (including generalized anxiety disorder and panic disorder) is 19.4%, and the incidence of anxiety with comorbid OCD is 8.8% (Yuan et al., 2001). Studies show that patients with OCD often have depressive symptoms, and depression is a common comorbidity of OCD, with a comorbidity rate of 50–60% (Overbeek et al., 2002; Besiroglu et al., 2007). Previous longitudinal studies have shown that the improvement of depressive symptoms can partially mediate the improvement of obsessive–compulsive symptoms; therefore, the study of anxiety and depressive symptoms in patients with OCD is necessary to explore the pathogenesis of OCD (Anholt et al., 2011; Zandberg et al., 2015).

However, the pathogenesis of OCD has not yet been accurately explained, and biological and psychological studies and interventions have shown the complexity of the etiology of OCD. Apart from genetic and neurobiological factors, social-psychological factors can also affect the occurrence and development of OCD. Previous imaging studies have suggested that OCD patients have abnormal neural circuits in the frontal lobe striatum and frontal lobe–parietal lobe–limbic system. The frontal parietal lobe is an important node in these two circuits, and its internal structure and functional connection with other brain regions can affect the occurrence of OCD (Gürsel et al., 2018). At present, research on the social-psychological factors of OCD primarily focuses on the personality and cognition dimensions. Perfectionism, as a cross-diagnostic process, drives various pathological processes (Group OCCW, 1997). The Compulsive Cognition Working Group (Group OCCW, 1997) noted that perfectionism was considered a risk factor for OCD development (Egan et al., 2011). Traditional cognitive dimension research and intervention primarily focus on the dysfunctional beliefs of patients, and the cognitive model of OCD points out that the dysfunctional beliefs play a key role in the pathogenesis of OCD (Sarawgi et al., 2013). However, with the rise of the third generation of cognitive–behavioral therapy represented by acceptance commitment therapy (ACT), research on the cognitive level has been expanded. The perspective no longer focuses on dysfunctional beliefs but focuses on patients' mental flexibility, acknowledges the universality of pain, requires patients to accept rather than resist pain and bad experience, and emphasizes the role of mindfulness (Dindo et al., 2017).

In an experiment that analyzes the mental flexibility of cancer patients and reported results of anxiety and depression, researchers found no significant differences in psychological flexibility based on gender (Hulbert-Williams and Storey, 2016). Gloster et al. (2011) assessed mental flexibility in clinical and non-clinical samples, and they found negligible associations between mental flexibility, gender, and age. However, the age of onset in OCD shows a bimodal pattern, with two peak ages of 12–14 years old and 20–22 years old, and the onset after 35 years old only accounts for 15% (Grant et al., 2007; de Mathis et al., 2008). Previous literature has defined the early onset and late onset of OCD by different classifications such as 15, 16, 17, 21, 30, and 50 years old, among which studies involving 15–18 years old are more common. Therefore, taking 18 years old as the node to study whether mental flexibility is different between patients with early onset and late onset has reference value for clinical psychotherapy. Studies have also found differences in the severity of symptoms such as examination and cleaning between male and female OCD patients (Cherian et al., 2014; Mathes et al., 2019). Therefore, investigating whether gender difference exists in the mental flexibility of OCD patients is important to study the relationship between obsessive–compulsive symptoms and mental flexibility.

(1) Demographic differences were found between cognitive fusion and experiential avoidance scores in the clinical group of OCD, age of onset, and gender.

(2) Cognitive fusion and experiential avoidance were significantly correlated with OCD, anxiety, and depression.

(3) Cognitive fusion and experiential avoidance positively predicted the level of OCD and the level of anxiety and depression in OCD patients.

Patients with OCD treated in the First Affiliated Hospital of Nanchang University from March 2018 to December 2019 were selected. The diagnosis of OCD was confirmed by a trained senior psychiatrist according to the Diagnostic and Statistical Manual of Mental Disorders Fifth Edition (DSM-5), and patients should meet the inclusion and exclusion criteria. The inclusion criteria were as follows: (1) OCD patients aged 13–45 years, first visit, and no history of psychological treatment, (2) volunteer to participate in this study, and (3) able to communicate with the researchers smoothly. The exclusion criteria were as follows: (1) patients with organic mental disorders, schizophrenia, and mood disorders, (2) patients with visual or auditory impairment, and (3) persons who were dependent on drugs or alcohol, pregnant, or lactating women. A total of 133 participants were recruited; 15 were excluded according to the abovementioned criteria, and 118 patients with OCD were enrolled after obtaining informed consent. Among the patients, 61 were males, 57 were females, 49 were under 18 years old, and 69 were 18 years old and above. A total of 85 patients with early-onset obsessive–compulsive disorder and 33 patients with late-onset OCD were included in the study.

The recruitment of the healthy control was primarily conducted through online questionnaires. The inclusion criteria were as follows: (1) age 13–45, (2) no previous or current organic brain diseases or major physical diseases, (3) no previous or current mental illness and relevant family history, and (4) with informed consent. A total of 109 normal participants were enrolled, including 58 males and 50 females. There were 43 under the age of 18, and 66 were 18 years old and above.

No significant difference in gender and age was found between the two groups (P > 0.05). The experiment was approved by the Ethics Committee of the First Affiliated Hospital of Nanchang University, and informed consent was obtained from all the participants or their legal guardians or first-degree relatives.

The Yale–Brown scale for OCD (Y-BOCS) consists of 10 items, in which the first 5 items assess obsessions, and the last 5 items assess compulsions, each on a five-point scale of 0–4, with an overall score of 40. The higher the score, the worse the symptoms will be. This scale is commonly used for the assessment of obsessive–compulsive symptoms worldwide. The Chinese version of Y-BOCS has acceptable reliability and validity (Xu and Zhang, 2006), good consistency among evaluators, intraclass correlation coefficient (ICC) of each item, and total scale score of ≥0.82. Retest reliability was acceptable, where the ICC of each item and total scale score was ≥0.75. Furthermore, Cronbach's alpha was 0.75.

Acceptance and Action Questionnaire-−2nd edition (AAQ-II, Chinese edition) is a Chinese version of the English version compiled by Bond. After obtaining the authorization of Bond, two graduate students of psychology in the Institute of Psychology, Chinese Academy of Sciences, independently translated the scale and formed the first draft of the Chinese version of AAQ-II after discussion and modification. Then, the questionnaire was translated back into English by two English professionals. Finally, the original scale and translated scale were collected to compare the differences between the two versions. The final translated scale consisted of seven items and adopted the seven-point scoring method. The higher the score, the higher the level of experiential avoidance. The internal consistency coefficient of the scale was 0.88, and the retest reliability was 0.80 (Cao et al., 2013).

Hamilton Anxiety Scale (HAMA), developed in 1960, was clinically used to assess the severity of the participants' anxiety disorders. The scale had 14 items and a score of 5. The scale contained two factors, namely, somatic anxiety and mental anxiety. The higher the total score of the scale, the more serious the anxiety (Zimmerman et al., 2020).

Hamilton Depression Scale (HAMD), a 17-item version (Zimmerman et al., 2013), was adopted in this study, which could be divided into five factors, namely, anxiety/somatization, weight, cognitive impairment, block, and sleep disorder. A score of 0–4 indicated that the higher the score, the more severe the depressive mood. 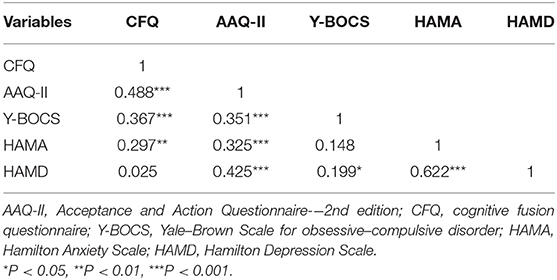 Results of Regression Analysis of Obsessive–Compulsive Symptoms, Anxiety, and Depression

The results of this study showed no significant differences in cognitive fusion and experiential avoidance scores of OCD patients with regard to gender and age of onset, which is in agreement with previous relevant research (Gloster et al., 2011; Hulbert-Williams and Storey, 2016).

In the multiple linear regression analysis of obsessive–compulsive symptoms' total score, cognitive fusion was included in the regression equation, which was consistent with the meta-cognitive model of OCD proposed by Wells and Papageorgiou (1998) and the cognitive model of OCD proposed by Reuman et al. (2016). Both models showed that thought fusion belief was the main cause of OCD. Reuman et al. (2016) first investigated the causal relationship between cognitive fusion and obsessional symptoms and found that cognitive fusion could predict unacceptable obsessive thoughts in obsessive symptoms. As a result of pathological cognitive fusion, the patient had confusion between thoughts and reality, and the patient was immersed in negative thoughts and emotions. Under the influence of negative thoughts, a patient's sense of self-efficacy decreased, deviated from the self-value, and finally led to OCD. Brain imaging studies of OCD have found that OCD patients had abnormal activity in the frontal lobe, parietal lobe, and other brain regions, resulting in impaired cognitive inhibition ability, compulsive ideas, and behavior (Grützmann et al., 2016; Zielinska et al., 2016). When patients have pathological cognitive fusion, they cannot get rid of their thoughts, which will lead to or aggravate the OCD. In addition, the experiential avoidance score was included in the regression equation, and the experiential avoidance could positively predict the level of obsessive–compulsive symptoms. Considering that the mechanism of experiential avoidance could relieve tension and reduce the negative experience brought by the threat situation, people often used experiential avoidance to avoid unwanted experience. The avoidance and control of negative emotions and adverse experiences in OCD patients will aggravate their psychological pain, lead to poor coping strategies, and aggravate the degree of compulsive symptoms, which are consistent with relevant research results (Wetterneck et al., 2014; Stockton et al., 2018). The higher the level of experiential avoidance, the lower the psychological flexibility, and the more likely psychological problems will occur. The effective treatment of OCD by ACT also showed that reducing the level of experiential avoidance played an important role in the improvement of OCD (Rohani et al., 2018).

The studies involving human participants were reviewed and approved by the ethics committee of The First Affiliated Hospital of Nanchang University. Written informed consent to participate in this study was provided by the participants, and where necessary, the participants' legal guardian/next of kin.

This study was supported by the National Natural Science Foundation of China (81960261).

Copyright © 2021 Xiong, Lai, Wu, Yuan, Tang, Chen, Liu and Hu. This is an open-access article distributed under the terms of the Creative Commons Attribution License (CC BY). The use, distribution or reproduction in other forums is permitted, provided the original author(s) and the copyright owner(s) are credited and that the original publication in this journal is cited, in accordance with accepted academic practice. No use, distribution or reproduction is permitted which does not comply with these terms.