The Effectiveness of Reminiscence Therapy on Alleviating Depressive Symptoms in Older Adults: A Systematic Review

Objective: Depression is one of the most common problems faced by older adults. Reminiscence therapy, defined as using the recall of past events, feelings, and thoughts facilitating pleasure, is one type of psychotherapy that could alleviate depressive feelings among older adults, improve their quality of life, and help them live independently. Reminiscence therapy originated from geriatric psychiatry, and is an effective non-pharmacological intervention that could be structured or unstructured and be conducted individually or in a group. The current systematic review was designed to summarize and review existing evidence on the effect of reminiscence therapy on depression in older adults.

Methods: We conducted a systematic review from January 2000 to Mar 2021 using 10 electronic databases in English and Chinese languages, including Medline, Embase, Cinahl, PsychInfo, Cochrane, Web of Science, Google Scholar, Science Direct, CNKI, and WANFANG. We excluded studies that didn't use randomized controlled trials (RCT) from the meta-analysis. The selected studies were scored using the Cochrane Risk of Bias tool. The RevMan 5.0 was used in subgroup analysis depending on how the interventions were classified.

Currently, both pharmacological and non-pharmacological treatments are available to treat depression in older adults. A large number of studies have shown that pharmacological treatment has many side effects (Wang et al., 2011; Cotelli et al., 2012; Gil et al., 2019), such as gaining weights, risk for heart disease, etc. Psychosocial methods, on the other hand, are often used by social workers as a key intervention strategy to address older adults' depression symptoms due to its standardized operating procedures, minimum harm and side effects, and cost-effectiveness (Lin et al., 2003; Bohlmeijer et al., 2007; Gil et al., 2019). Life review is both a phenomenon and a method of treatment for old adults with depression, and its impact have interested a growing number of scientists and clinicians (Fry, 1983; Watt and Cappeliez, 2000). It was introduced by Butler in 1963 based on Erikson's psychosocial development theory and Aichley's continuity theory (Butler, 1963). It refers to a treatment process in which older adults are guided to review, re-experience, and generate new interpretations of their past lives in order to help them better understand themselves, increase self-esteem, and promote socialization (Hsieh and Wang, 2003). Reminiscence therapy can be administered by either individual or group reminiscence therapy based on the needs of participants. Moreover, Westerhof et al. (2010) divided reminiscence therapy into simple reminiscence, life review, and life review therapy, according to the depth of participants' memories. Simple reminiscence therapy is suitable for older adults with psychological problems who do not need pharmacological treatment. In contrast, life review requires an implementer to design an intervention plan, ask questions, formulate processes and set goals based on older adults' circumstances. Life-review therapy is a highly structured psychotherapy method suitable for older adults suffering from depression and other mental illnesses (Fan and Li, 2014).

This study was registered in CAMPBELL CHINA. The study's inclusion criteria were decided according to the principles of “PICOS” in the Cochrane System Evaluation Manual (Higgins, 2011) as described below. (1) The participants in this study were older adults over 50 years of age. In the included literature, all participants were over 60 years of age, except for one study in which the subjects were 51–90 years of age (but the mean age was 64.3 years). The reasons for using 50 years as the criterion for older adults are: (i) the inclusion criteria of Pot extend the definition of “older adults” to those over 50 years of age due to the limitations of the recruitment method. (ii) In China, the retirement age for female workers is 50 years old, and retirement is generally considered to be a step into old age. (2) The purpose of the intervention is to alleviate depressive symptoms in older adults. (3) There are standardized and credible research goals and reported conclusion data of the intervention effect on depression symptoms. (4) The intervention used is reminiscence therapy. (5) The depressive symptoms are mild to moderate. (6) Randomized Controlled Trial (RCT). (7) The language of the article is Chinese or English.

The exclusion criteria were: (1) studies published in languages other than Chinese or English, (2) studies on older adults suffering from severe depressive symptoms or are seriously ill, (3) studies that do not report both pre- and post-tests on depressive symptoms; (4) studies with a sample size of lower than 20 participants, and (5) studies with patients with neurological diseases or cognitive impairments.

These researchers analyzed the data to obtain a bias analysis and quality evaluation report according to the PRISMA2020 statement standard using the RevMan 5.0 (Review Manager) software provided by the Cochrane Collaboration.

A total of 527 related articles were identified and retrieved based on the above methods (see Figure 1). Ten studies met the inclusion criteria and were included in the review. In the included studies, 453 older adults aged over 50 years received an intervention. Nine studies of the ten studies listed the content of reminiscence therapy, and three had a sample size >100 (Pot et al., 2010; Zhou et al., 2012; Viguer et al., 2017). Figure 1 provides a flow chart of literature selection on reminiscence therapy interventions for older adults with depressive symptoms. 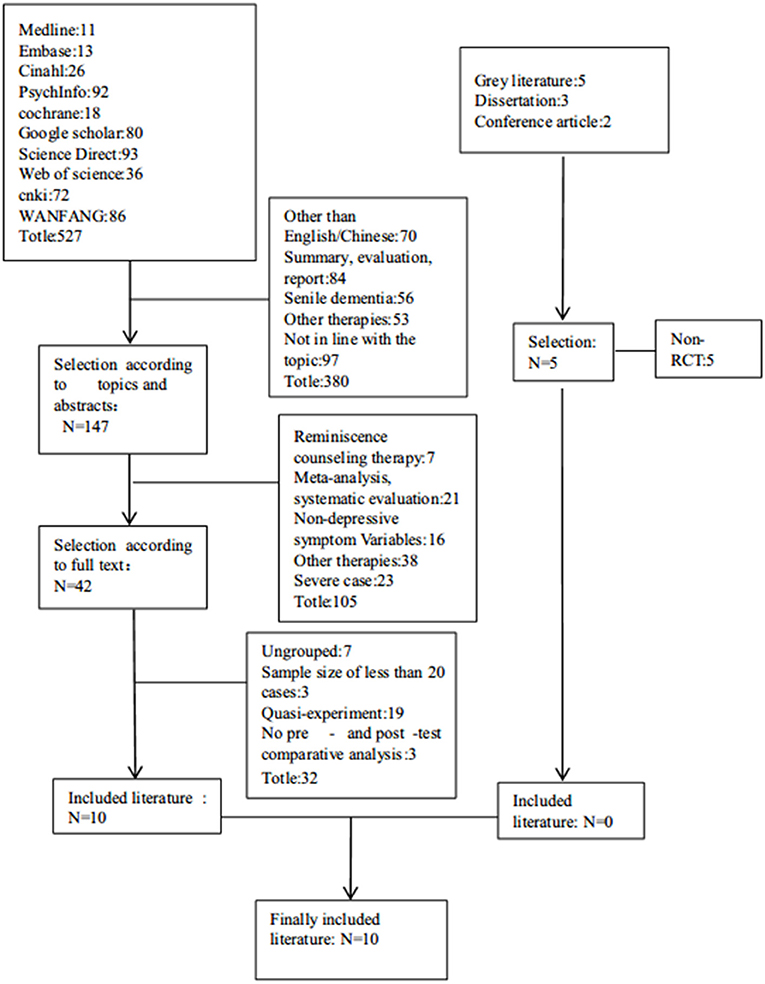 Depressive symptoms were the primary outcome measured in all the studies using different depression scales, used the following tools: The Geriatric Depression Scale (GDS) consists of 30 questions, and each question answer “Yes” and “No.” The Center for Epidemiological Studies Depression Scale(CES-D). It is a 20-item self-report scale developed to measure a person's emotional performance in the past week. Those studies also measured other outcomes including self-report life satisfaction, happiness, self-esteem, and loneliness. Eight studies included information on the persons who conduct the interventions, including nurses, psychological counselors, social workers, postgraduates, and experts that had received training before implementing the intervention.

Inclusion in the Study

We classified the characteristics of the included studies based on the PICOS model (Table 1). In all the studies, only the intervention groups were provided reminiscence therapy. The control group received routine care, health education, and conducted general activities and community services.

Table 1. The characteristics of the included studies based on the PICOSS model.

In terms of the risk of bias in the included studies (Figure 2), four studies notified the random sequences. None of the 10 articles specified the allocation concealment, nor did they notify whether the studies were blind or not. The selective reporting of the evidence was not clearly stated. Moreover, three studies were low in other risks of bias (Chiang et al., 2010; Viguer et al., 2017; Syed-Elias et al., 2020). Overall, the quality of the 10 included articles was acceptable. 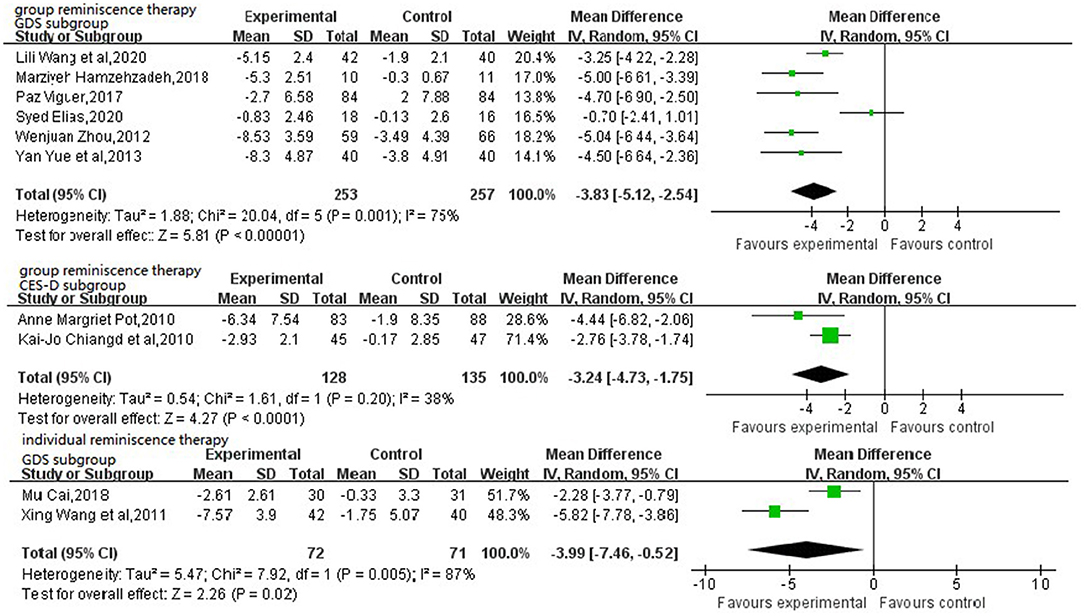 Figure 4. Forest plot of the effect of group and individual reminiscence therapy on relieving depression symptoms.

The meta-analysis results shown in Figure 5 indicate that reminiscence therapy significantly improved older adult's life satisfaction at a p-level of 0.001 [MD = 7.55, 95%CI (3.48, 11.62)]. But there was still clinical heterogeneity (I2 = 91, ≥50%), which mainly comes from heterogeneity of subjects, one study subjects (Yue and Chen, 2013) is different from other two. The 95% CI of the results of the included 3 studies were distributed on right sides of the axis, suggesting significant positive correlation between the overall effect of the interventions, and all of them had significant effects.

We systematically evaluated 10 reminiscence therapy intervention trials. The results are consistent with previous studies concluding that the depressive symptoms of older adults were significantly relieved after the intervention using reminiscence therapy (Hsieh and Wang, 2003; Chen et al., 2012; He, 2018). As a special branch of reminiscence therapy, the effectiveness of Spiritual Reminiscence Therapy(SRT) for depression is still inconclusive, but the within-group's results showed a significant reduction in M-GDS-14 scores from pre-test to 3-month follow-up for both groups. This means that the SRT program may have some positive effect to attenuate depression (Syed-Elias et al., 2020), and the results of meta-analysis showed that the effect size was the smallest [MD = −0.70, 95% CI (−2.41, 1.01)].

There are certain variations of the sample characteristics in the included RCTs. One of the studies conducted reminisce therapy with participants taking prescribed antidepressants by physicians (Wang et al., 2020). And there are two studies sampled older adults with chronic illnesses (Cai, 2018; Wang et al., 2020). We included those two studies in final review for multiple reasons. First, appropriate measures were taken during the intervention process in these studies to control for chronic illnesses and pharmacotherapy. Second, those two characteristics are not uncommon among older adults with depression symptoms: chronic illnesses are common and almost inevitable in older adults, and pharmacotherapy remains the primary treatment for older adults' depression and other mental illnesses (Cai, 2018; Wang et al., 2020). Nevertheless, those studies indicated that reminiscence therapy has a significant positive effect on alleviating depressive symptoms even if older adults were suffering from chronic illnesses or were taking antidepressants (Cai, 2018; Wang et al., 2020). However, more evidence from larger-scale studies are needed to support this conclusion. In addition, older relatives as a very important influence factor, There is few studies investigate the impact of reminiscence therapy on older relatives as a part of outcome measure to explore the efficacious mechanism of reminiscence therapy in alleviating older adults' depressive symptoms.

It should be noted that this research only included published literature on RCTs in Chinese and English, which might have caused a bias due to incomplete literature collection and specific differences in the included studies related to sample selection, trial design, and validity. Despite this limitation, we systematically reviewed the evidence for the effectiveness of reminiscence therapy and identified several gaps in current evidence, which has both research and practice implications.

There are certain limitations of the included studies. First, it should be noted that it is difficult to compare the effects of interventions of included RCTs due to lack of standardized intervention procedure. For example, there were also differences in intervention methods, and intervention durations, and follow-up period. Also, the studies conducted reminiscence therapy in many different locations, including community centers, medical centers, and care institutions for older adults, resulting in differences in evaluating intervention effects. Second, although the results of this systematic review indicated that the short-term intervention effect of reminiscence therapy was highly significant, reminiscence therapy might merely provide temporary relief to older adults' mental health problems. Therefore, the long-term effect of reminiscence therapy on alleviating depression needs to be investigated by more rigorous research. Third, research results reviewed in this article indicated that the reminiscence therapy implementation leader played a crucial role in the treatment effect (Yue and Chen, 2013). However, only one study involved professional psychologists in guiding treatment (Chiang et al., 2010). Therefore, there is a need to conduct more research on the influence of the leader's ability on treatment outcomes. Forth, the quality of the Chinese research included in this article is not outstanding, as the research on reminiscence therapy and interventions in older adults' depressive symptoms in China is still emerging. Fifth, some of the included studies had a small sample size, and only three studies have a sample size of more than 100. Larger-scale studies are needed in order to have decent statistical power to prove the effectiveness. Last but not least, because of the variety of intervention methods in the included evidence, there may be methodological heterogeneity, and the included scales are not completely uniform, this may also lead to measurement heterogeneity.

This work was supported by The Key projects of National Social Science Foundation of China (No. 20ARK004).

Copyright © 2021 Liu, Yang, Lou, Zhou and Tong. This is an open-access article distributed under the terms of the Creative Commons Attribution License (CC BY). The use, distribution or reproduction in other forums is permitted, provided the original author(s) and the copyright owner(s) are credited and that the original publication in this journal is cited, in accordance with accepted academic practice. No use, distribution or reproduction is permitted which does not comply with these terms.